Have you sent oojason a PM? Going on the quote above he may be able to help / point you in the right direction?

^ very well done and covers a fair bit from the Original Trilogy too.

One scene from it caught the eye… 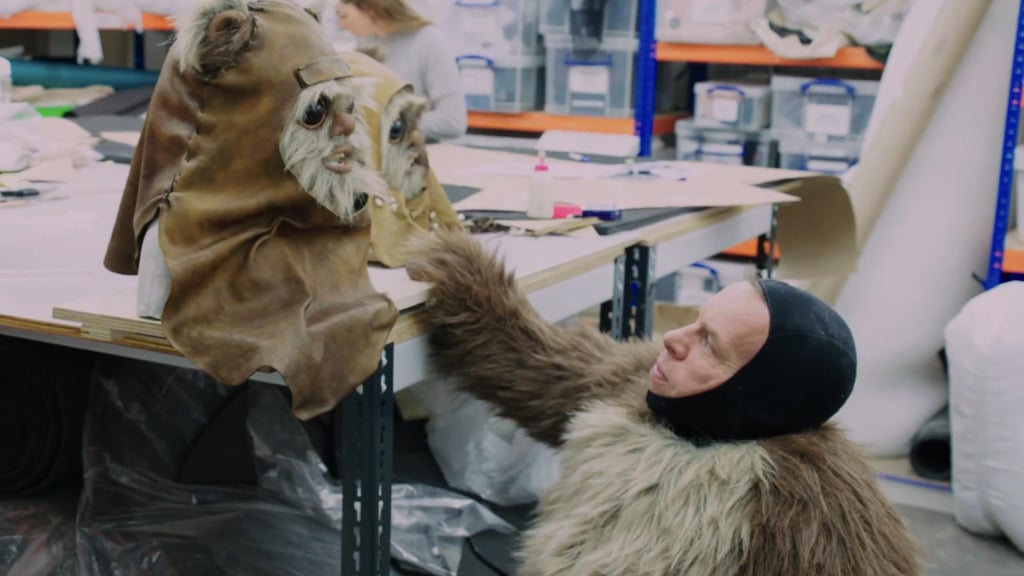 Wicket is back for TROS? (If that is indeed a new / recent image?)

"When Star Wars landed in the theaters, it introduced audiences to a galaxy filled with heroes and villains, robots and space ships, and a dizzying variety of alien life. But when the lights came up, they all disappeared… Unless you had all the toys. In which case, the adventure never had to end.

In backyards, playgrounds, basements, and bedrooms, Star Wars toys helped kids re-enact scenes from their favorite movies, and create entirely new dangers for Luke Skywalker and his friends to face. They were lusted after on holidays and birthdays, swapped with great cunning out on the school yard, and carefully collected like fine treasures. Like no toys before them, the action figures, space ships, play sets, and props were a phenomenon that swept the nation with as much force as the film that inspired them.

Along the way they transformed both the toy and movie industries, earned those behind them vast amounts of wealth, and ultimately created a hobby that, 30 years later, still holds sway over not only the people who grew up with the toys, but also an entirely new generation of fans.

Plastic Galaxy is a documentary that explores the groundbreaking and breathtaking world of Star Wars toys. Through interviews with former Kenner employees, experts, authors, and collectors, it looks at the toys’ history, their influence, and the fond and fervent feelings they elicit today." 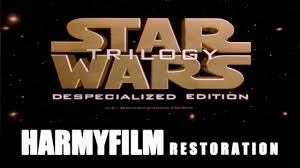 “Star Wars: Despecialized Edition is a fan edit project with the goal to reconstruct the original theatrical releases of the Star Wars original trilogy (Episodes IV, V, & VI) at a quality comparable to the high-definition medium of our time.”

This extended version of the work-in-progress documentary is about the history and sources of Harmy’s Despecialized Edition - an awesome and insightful watch.

More Info on the Despecialized Editions by Harmy

Sweet update! The new categories should make it even easier for us all to find the various types of projects on here 😃

So this happened in what, 2016. Its still not available at any source that the common non 12yo person has time to try to access?! I haven’t been on myspleen since…2007? 08? When all of these pussy repositories went private in the late oughts what did it accomplish? Nothing but closing off access because I never ran into too many normies there to begin with. If THEY want them shut down they will be shut down. You don’t think that all of the posts across the internet saying what copyrighted property was available where is enough to get these things destroyed? I don’t belong to any private trackers so how do I even attempt to sign up to blutopia etc. This is all very shortsighted. Frankly these things should be spread across the web so they have a better chance of surviving the inevitable destruction of these dinosaur sites. There are multiple scans of Song of the South on internet archive for crying out loud. Man up zoomer-boomer internet, the only ppl that fall into these cliques on the internet are 12/55yos. Even this site does the thing where “oh, we don’t post things that these companies can use to take us down” but…you allow ppl to collect money to scan films to distribute them? You know ppl have been caught up in a lot of legal problems for less than that right? Why can’t the scan just have a nice searchable name and file size attached to it and ppl can find them where they may. Its 4 years later and this shit is still unfindable. Very sad, boomers.

Even for a 12 year old that is a pretty entitled post.

I hope your teens sees a little more patience and understanding.

Testing various types of aircraft which people mistake for UFOs? Sure thing!

With apologies to those who have been ‘probed’ over the years 😉

Have you spoken with HanDuet to let him know of the problem? He may be able to help you.

'If you find any errors, have feedback, need support, or can think of ideas for improving this guide, please send me a message through my Facebook page. I will also post on that page when a new version of this guide is published, so please “like” the page to be informed of future updates!

As you own the official blu ray set of the Original Trilogy you are eligible to acquire Harmy’s Despecialized Editions.

The custom blu ray set you are after can be found here:-

in the ‘Star Wars Preservation’ forum.

solkap has provided a step-by-step guide on how to acquire this particular set. 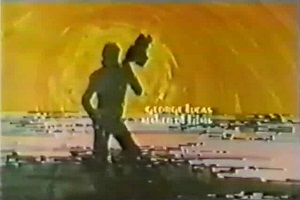 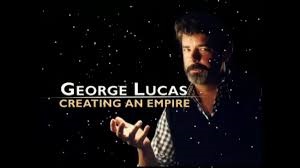 "George Lucas: Creating An Empire is an amazing life story of one of the most imaginative and prolific creators of film. When he was young, George didn’t take school - or anything else - seriously. But when he enrolled in film school, it was clear he’d found his calling.

His first successful film was American Graffiti, but Lucas is best known as the man behind the Star Wars trilogy, three of the most popular movies of all time.

He developed new technology and filmmaking techniques that revolutionized Hollywood, and the phenomenon continues with three much-anticipated new movies, including Star Wars Episode I: The Phantom Menace and Star Wars Episode II: Attack of the Clones.

Lucas has gone on to build a film empire that includes Industrial Light and Magic, the top special-effects company in the world. His epic story is told by much of the cast that has been a part of his life, including Steven Spielberg, Francis Ford Coppola, Harrison Ford, Ron Howard, Carrie Fisher, Liam Neeson, Haskell Wexler, Peter Travers, James Cameron, his sister Kate Nygaard, his daughters Amanda and Katie, George himself, and many other friends and associates." 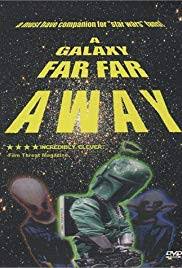 “Filmmaker Tariq Jalil interviews fans of the Star Wars franchise as they wait on line for 42 days to buy tickets for ‘Star Wars: Episode I - The Phantom Menace’.”

^ Again, not really a favourite, though interesting to see Star Wars fans (Original Trilogy fans in the main) eagerly await the release the first film in the Prequel Trilogy. It seems such a long time ago… 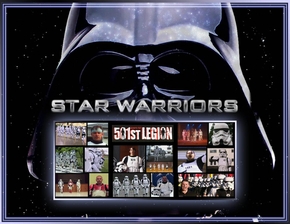 “Some Star Wars fans want to collect action figures… these fans want to be action figures! A tribute to the 501st Legion, a global organization of Star Wars costume enthusiasts, this insightful documentary shows how the super-fan club promotes interest in the films through charity and volunteer work at fundraisers and high-profile special events around the world.”

Still no reasons from George, Lucasfilm, ILM, or Disney yet?

I suppose the ‘it was always meant to be this way’ or ‘this is the real finished version - not that one which has stood for 20 years’ only works so many times? 😉

There have been no official explanations of any changes since the old “What Has Changed” articles in 2006.

Hell, they made #maclunkey show a Greedo emoji, but no one has explained what it even means.

Sorry - I should have been clearer.

Though I meant interviews with George or people at ILM - in articles or promos in magazines or publications (or even on the various Star Wars social media platforms) - featuring more claims of his ‘visions’ and sometimes dubious ‘explanations’ / ‘reasons’ (eg, ‘we didn’t have that particular shot’).

Still no reasons from George, Lucasfilm, ILM, or Disney yet?

I suppose the ‘it was always meant to be this way’ or ‘this is the real finished version - not that one which has stood for 20 years’ only works so many times? 😉

Hey guys, been lurking this forum for a while and just decided to take a crack at my own covers. Pretty simple design, I’m no graphic artist. Anyway I’ve got them all in a Google Drive here:
https://drive.google.com/open?id=1sbPSYutI1N7CVMu3xQuR806t68AI0EmW

Thoese look very cool! I really like the large images used for both back and front sides of the covers.

These may be of some interest:-

More info, and downloads to the above art - and more, here:-

He said ‘Don’t give into to hate. Tha leads to the Dark Side!’

I remember when seemless branching came out… and thinking that it wouldn’t be too long that we would have the possibility of being able to pick and choose what color lightsaber we could watch on future versions!

Maybe even picking what type of fighter would battle TIE fighters etc!

Can I get a link to your RoboCop remake, please Mocata? It sounds fun 😃

There are many awesome animators around, it would be cool to see some of their interpretations of a Prequel Trilogy more in keeping with the Original Trilogy style (with maybe a few fixes / tweaks along the way?)

Sort of a ‘Daz Tibbles meets Galaxy of Adventures’ style?

Or the guy who did that aewsome ‘TIE Fighter’ animation youtube vid - OtaKing770?

This video on the early Colin Cantwell designs was a good and discerning watch:-

(with a comment and plug from Mr Cantwell himself in the comments section!)

‘No, The Mandalorian isn’t a Boba Fett show. GOOD!’ - by HelloGreedo

HG made a couple of good points here; for many of the casual Star Wars fans (or sci-fi fan) they’ll probably tune in expecting the series to be about Bobba or the Fetts. It’ll be interesting to see how they take to new characters in a familiar timeline and setting…

This video essay blew me away:
https://youtu.be/f9mv2Ad8nzI

Jason posted some of their content in here as an alternative viewpoint / fresh ideas and input on the subject.

I really hope they do a lot more videos and are around for a long time to come.

^ Great idea and execution for a site, and really lifting to see a positive addition to the Star Wars websites out there of late.