This page has the Battlefront 2017 Star Destroyer. There is a separate model that’s just the Rogue One tower somewhere else on the forum that I’m trying to find.

Here is the ANH/R1 tower, posted by Angel.

https://www.dropbox.com/s/w9mx2wz8yfncenc/bridge SD.rar?dl=0 try this link for the bridge.
Unfortunately i cant share the rest of the model. 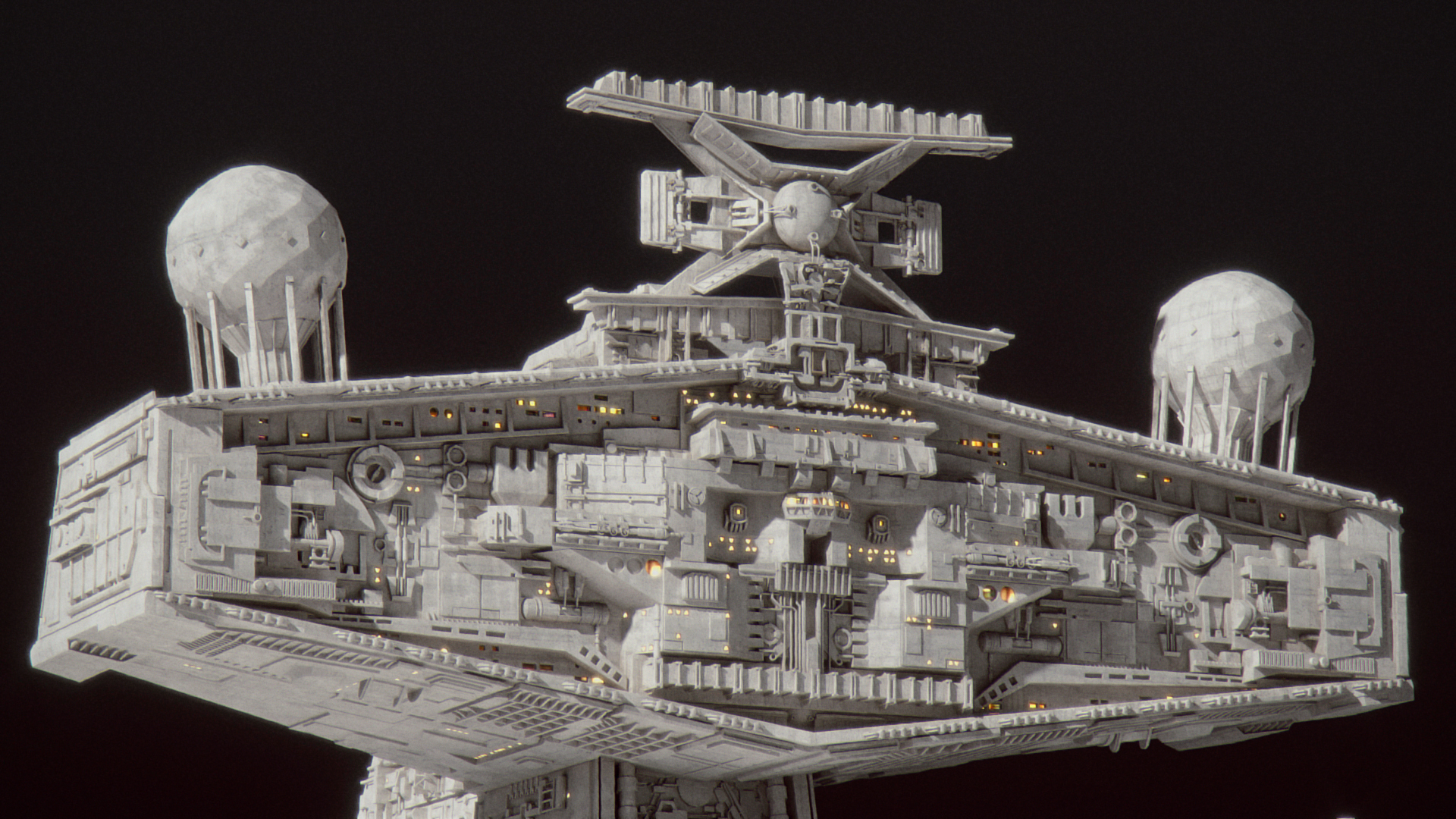 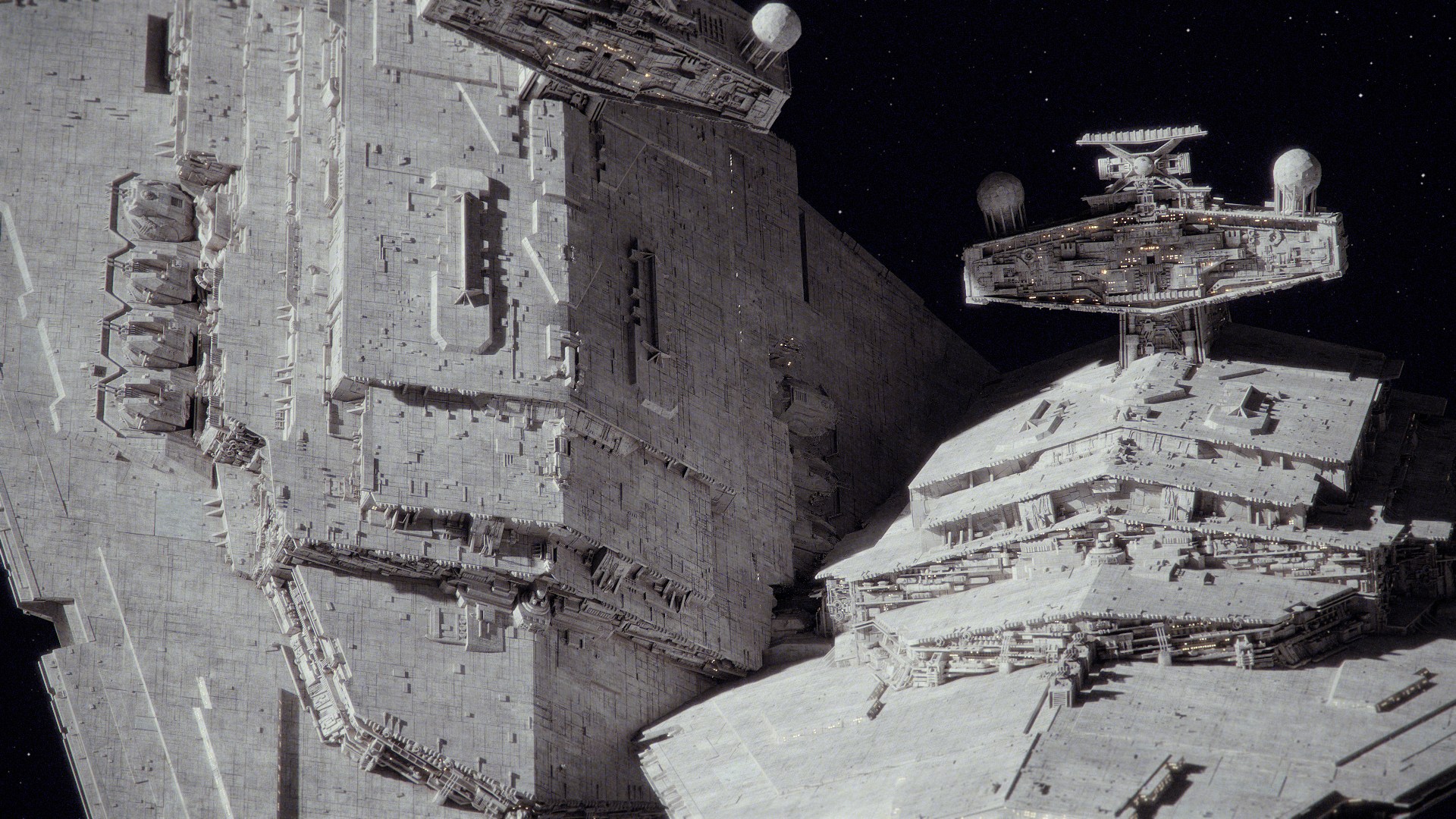 I thought Angel was a myth! 😉

You’d better start your own thread here so we can bug you all the time about finishing your edit! 😄

Not before I have all the Infinity Stones!

Came to say hi since so many people messaged me in Deviantart page! Keep up the awesome work man!

RE: the recent re-links to Angel's deviantart page on Ady's thread among the bleached-out, turquoised-out stuff which doesn't jingle my bells much are a few that stylistically make ANH look more like ESB.

They are both films of their time and I want to have a proper preservation of both looks (Harmy's versions being the current next best thing).

But if the goal of a SE edit is to make the films feel less like films and more like events from the same fictional universe, making the OT feel like it's all set in the same universe is as important as making the PT look like it exists in the same universe as the OT.  I personally would rather ANH and ROTJ were made to look more like ESB than any other combination. Of all the OT films it just feels to me, more cinematic and complete without the plastic reality of the PT or rubber reality of ROTJ.

Threepio's eyes being made bright yellow like ESB would aid some of the shots of ANH and ROTJ where they look dull or switched off for example.

And the green charts in the Rebel war room would look better blue like they are in ESB. These are the mockup ideas I like on those pages.

George and Richard didn't seem to have the same eye for framing a shot as Kersh and I like sometimes Angel's reframing of shots to give them a more painterly composition.

Of all the colour choices on there one I do approve of is the recoloring of the speeder chasing after artoo. It really makes the image more dramatic and less uniformly pink.

But I wish he would back down on the blue fixation a bit.

As I've said many times the guy has got talent even if he has burned bridges here and I would love to see his ideas in motion.

Nah I was considering that but at the end i dont think this site might be the correct spot for posting.

Originaltrilogy.com is a great site with great content. In a way, it would be wrong to have a radical edit/vision that doesnt follow (even some can say doesnt respect) the original vision so closely.

From the other hand you might prefer a thread for updates. Only time will tell :) You can still check my DeviantArt page for updates and leave feedback.

I wont elaborate any further. Thanks for the interest. I just wanted that simple thing. And thats all from me :)

Thanks Bingo, but you''ll see that the thing about all this is that I don't want the work to be labeled for adywan's project and ultimately to his credit. Those who are enough into my work will still have access to it through my Deviant Art page, and soon even to personal blogs. Personally, I find it not fair that one's work passes by in vain while others use a lot of concepts and ideas never giving a clear definition if the credit will come back to the ovens where they were cooked. You may say this is a melting pot, with everyone's ideas, and I agree. It's just that some people are reluctant to let some of us throw things in their pot, well, in that case they won't have access to ANY of my ingredients.

I wanted to have short interactions in this pages, because otherwise it would be rather hard, and so I decided to deal with things with one swift stroke.

You may dispense with the pleasantries, Im here to say the sites that 005 runs (blog wordpress etc) , which contains my artwork should remove all my images (working and non working) and any mentioning of my name within these pages, within 5 days. (even from facebook I think there is a digital yoda replacement i did and someone posted)

Nice to see you Bingo and Ben :) Im glad you are holding ok :)

I see the forum got some renovation, needed indeed. Great ideas around

Alright, after a bit of a break, I'm finally back to editing. Here's what I'm currently up to these days

Great example of good selective attention sound design! You treated the scenes like a professional.

More people should take inspiration from you from now on!

His videos have disappeared from YouTube.  Hopefully he gets working again soon.  It would be a shame if all of his brilliant ideas were lost.  We really need to get a repository going of all the prequel edit videos.  This isn't the first time this has happened (e.g. SSWR's videos).

YouTube removed his videos. A guy too reported him to Youtube about his padme is still alive video.

He will continue this edit very later this year.

One more greater (if not faithful replication of the original) example of star wars shots.

Do you think they basically ripped Ralph off or what I mean the resemblence between the 2 buildings is basically a carbon copy apart from that symbol but good thinking Angel for the swap of symbols.... And brilliant find!

Possibly but there arent many to remember that, or mention the similarities :)

The movie have a couple more shots of this building i remember. The only bad(if you can count as bad) is the ash that raining all the time. I would leave it tho as artistic liberation :P

Its from a movie called Priest

You can take a preview of this shot in the trailer

I can imagine changing that cross with the imperial symbol and that blue monitor with something imperialish i guess.

Higher rez images can be taken from the movie or the HD trailers.

So does anyone want to have a go at a matte of this but I have some stipulation about the colourisation being Blues and darkly lit with night lights on in buildings /dusk nightfall the sky will have a lightning storm footage as a backdrop so do not worry too much for the sky. Think more along the lines of the tower of Barud-dur or draculas castle than coruscant as we knew it... It needs to look more gothic than techno city basically If anyone wants to have a go it will make the sequence complete

I think Priest is the one shot you are looking for :)

Wasnt Mr Jaitea that had connections with people that are in garrisons and wear realistic prop suits?

Now before judging the clip from its humorous nature the starting shots is an example with some effort some shots can look amazingly good in green screen and few actors.

Imagine it with more care and attention to detail and compositing what could have been :)

Someone buy Angel a copy of Vegas so he can learn to fanedit. I would suggest (respectfully) that there are not enough truly radical and yet practical ideas. I would like to state for the record that the following idea was conceived before I read through this entire thread, though certain refinements have been made based on discussion here.

Thanks for the support of Moth3r all this nonsense took an End.

I had to wait before i could say anything because that would make my position even harder.

The guy from the video game The Force Unleashed does an almost spot on Vader impression.

Remove any indication of cuvve. add pipes and all kinds of machinery.

Remove all the shinny surfaces and add grebbles and connections.

remove also the pin points behind the engine.

it will be perfect.

I know Adywan used some shot of a TIE pilot from behind.

The only reused material I've ever seen is when the stormtroopers and TIE pilots are scurrying through the halls of the Death Star after the Executor crashes and the point where the gunners are preparing to fire the superlaser.

Its from a fan film called Star Wars Revelations

The live action cockpits/props are the same as ANH. You can notice that they have the trench X white schematic on the bottom and not only that but its flipped and rised.

that doesnt count tho on the back of the Xwing. It seems each movie gets more complex and bulkier. Possible upgrades?

The Stormtrooper running are indeed from ANH but outakes.

Wow, that's pretty good.  See, I honestly know very little about how these special effects are pulled off.  Here is the post of all Johannus's models. I figure it would be easier to film the Executor model and add texture than to build a complete studio-size or 3D model. Then digitally add texture to give it a similar level of realism?

I did something ages ago Similar to what you are looking at.

Just to add that ROTJ has already reused footage from ANH in terms of cockpit shots. The already cheap production got cheaper. Always welcome to see something new.

Would Empire at War really look like ROTJ though?

Not a chance ;). Still when someone wants to propose a change or an additional shot, this game might give inspiration of how a shot could be. Like a previz moving storyboard.

Later it comes the real deal of doing CG and coordinate the flow.