Here are the barcode covers: 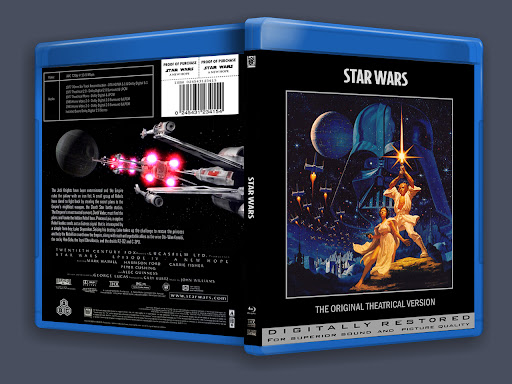 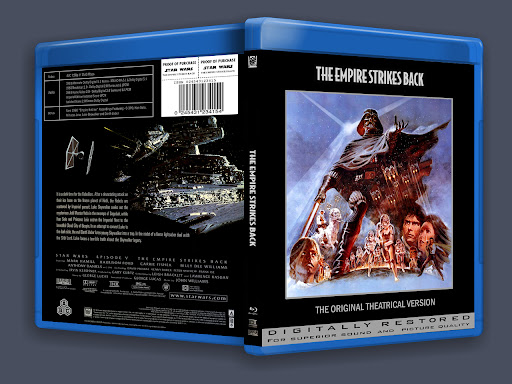 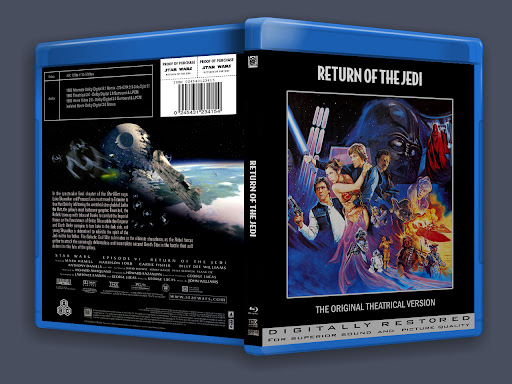 Please don't ask me for links to the full res versions, DJ wishes to distribute them only with the set and I fully respect that.

Forgive? I don't know if I would "forgive" anything. This type of thinking seems foreign to me, like Lucas is some dysfunctional family member that we have to come to terms with. He is an artist and a custodian of national treasures and he gets judged the same way anyone else in his position would be. Did people "forgive" Ted Turner because he released the black and white versions of his colourized films again? I doubt people think about it in those terms, but I'm sure they are greatful he did so. I am also sure they still dislike the fact that he had the nerve to colourize them in the first place.

The OT SE would still represent a butchering of a classic. People have the right, and are right, to complain about the sheer existance of this.

Lucas would have still repressed the OT for well over a decade and impeded a lot of people' enjoyment of their art and culture, as well as sullying the memory of those films. This should not be forgotten, as though it didn't happen.

Lucas has more to attone for his actions rather than "I'm sorry." In fact, restoring the OOT wouldn't even be saying I'm sorry. Lucas would never say or feel such a thing. IMO all it would be was, "here you go, please get off my back now," even if this seems like a cynical perspective of mine.

Would the resentment die down? Of course. But in the larger picture, Lucas cannot undo his actions and change his past. He can lessen how harsh history will judge him, but what is done is done and that fact alone is not worth forgetting. Everyone has to live with the actions they take, even if they redress them later.

Jebsus Zombie, you're in a mood today.

As far as it being a "pile of silly fun," yes, I think many fans of TPM would say that TPM shares this quality with MIB. I think that is also one of the greatest attributes of the original Star Wars film--like Independenec Day or Men In Black, it doesn't take itself very seriously, has good characters and good natured humour, excellent special effects and action scenes, and you feel good at the end of the picture. Which is a point you continue to miss. He didn't compare it to MIB in a general sense, but specifically in these qualities.

I think there was a certain meaning, a degree of Truth (yes, capital "T"), that was present in Star Wars 1977 that puts it in a different category than MIB and ID4. This never got in the way of the fun of course.

I've said this before in another thread, but SW77 defies easy categorization. It is sort of it's own genre.

You, obviously, have not tried Texas beer.

I don't trust any beer made in warm climates. Yeah, I know it can snow in Texas on occasion.

I'm gone for the long weekend, so an early Happy Canada Day to my fellow Canucks! None of us should be drinking any American Beer (aka: "piss") this weekend.

144 pages of this? When we know we aren't getting what we want?

Not that I'm biased.

The actor who played him (too lazy to look it up) did a good job. I really liked the short scene in AOTC when he meets Anakin after 10 years; sometimes it seems that there was more emotion in the dialogue from Watto in that one scene than in the rest of the PT combined.

You are sending me into a shame spiral.

I am ashamed to admit, but I talked myself into thinking they were decent films until around 2006. My true contempt for them really came about as a result of the Red Letter Media TPM review.

Just stick in your original 1982/83 pan and scan VHS or laserdisc.

At least it is a transfer of the original film before it underwent digital manipulation/restoration.

And sure the picture is not accurate with regards to color reproduction and image resolution of the cinematic prints BUT the actual tape/laserdisc is from the era that the original Star Wars was last  screened theatrically(1982)----hence it has a lot of nostalgic value---and once you start watching you tend not to pay too much attention to the picture/sound quality anyway.

You just enjoy the story and the characters----just like you did when you were in the theater.

Ironically due to it's bright color timing-that original 1982 VHS has detail which is not apparent in the 2004 DVD(because it so dark)----it actually allows you to enjoy the film even more.

You know, I agree with this.

instead of watching it on my 8/16K playback system that will probably exist at that point in time!(Sharp and Japan's NHK already have a working TV prototype!)

The other carried over characters are running on fumes in ROTJ.

I agree. This is the main problem of ROTJ, and not the Ewoks.

Mate--I guess it is all subjective---in my personal opinion-from the moment Hamill  shouts "never!" to the moment that he says"I am a Jedi--like my father before me"-----he transcends anything he achieved in any of the 3 films.

It is all encapsulated in these few minutes--- the physical prowess and grace as he  induces Vader to go backwards--the emotional power as be cascades between anger and control---and finally the realization that he has not submitted himself to the temptation of the dark side and that he has surpassed his own father's failings.

At the time of the films theatrical release----it was a very cathartic moment for the audience---I know---I saw it twice in 83'---and the audience literally sucked it's breath in during this scene(you have to remember that for 5 years prior to ROTJ-1977-82--Vader had relentlessly kicked ass ,so to finally see him get beat was incredibly powerful---something that cannot be replicated by watching the film in 2011 for the 200th time!)

Just stick in your original 1982/83 pan and scan VHS or laserdisc.

At least it is a transfer of the original film before it underwent digital manipulation/restoration.

And sure the picture is not accurate with regards to color reproduction and image resolution of the cinematic prints BUT the actual tape/laserdisc is from the era that the original Star Wars was last  screened theatrically(1982)----hence it has a lot of nostalgic value---and once you start watching you tend not to pay too much attention to the picture/sound quality anyway.

You just enjoy the story and the characters----just like you did when you were in the theater.

Ironically due to it's bright color timing-that original 1982 VHS has detail which is not apparent in the 2004 DVD(because it so dark)----it actually allows you to enjoy the film even more.

You know, I agree with this.

The only person who comes close is Ian and he is trying his best with some really awful hammy dialogue which he manages to transcend with a genuinely creepy vocal and physical nonchalance (he isn't the Emperor I imagined from the more spooky ESB hologram but that's not his fault).

Making hammy dialogue sound good was one of the things that gives these movies their charm, as Harrison Ford found out ("You can write this shit George, but you can't say it.").

When it doesn't succeed...you get the prequels. All the Star Wars films dance on a razor's edge from becoming spoofs/parodies.

Mark turns in a performance consistent with the rest of the films and that's it really.

I strongly disagree with the above statement. Mark's performance is excellent; far superior to his work in the prior two films. It's not so much about what he says, then what he doesn't say. There is just a quiet sadness to the performance that really gets me when I watch ROTJ; which makes the ending Ewok celebration when he sees the ghosts, and that sadness lifts, so powerful.

Maybe I'm reading to much into it. I am a biased defender of ROTJ afterall!

I'm not sure what source was used for mastering the Aliens Blu-Ray but it is quite common to use an interpositive (a 2nd generation copy of the original negative) for home video masters. Dupe grain is the grain added by making a copy of a film strip by combining the grain already present in the source with the grain in the film strip onto which it is being copied.

Got it. Thanks Harmy.

How does the Alien series quad look

I've only seen Aliens but the transfer was amazing IMO. There was some scare prior to its release when Cameron spoke about personally overseeing the transfer and grain removal but the transfer it really nice and there is a lot of grain. If any grain was removed, it was probably just excessive dupe grain.

Good news at last. A question; what is dupe grain?

Just from screenshots, I like the look of Lee's Technicolor recreation myself. Everyone has different tastes of course.

A lot of interesting info; my thanks to everyone participating in the thread. I know that many transfers (Predator for instance) were quite poorly done. I suspect the videogame generation loves ultaclear images and that is why we get some of those strange looking transfers. How does the Alien series quad look?

Thanks for moving the thread to the correct location BTW. My bad.

There was some discussion about 70mm vs. 35mm film. Is there are reference or thread where I can find more info?

Maybe it's the transfers, I don't know, but I really don't like the look of movies on blu ray. They look, well, cheap; almost like home video.

Please correct me if I am crazy for thinking this.

I'll see you, and raise you that HD TV can look wrong.

I don't know what it is either... can't phrase it but it looks TOO real, too clean, to 'fast' somehow. I'm sure the more tech saavy memebers here can clarify the terms for us.

Partly it's that our eyes are trained to recognize certain types of images as certain things: home movies, standard films, security cameras, Mexican soap operas, and even if we dont consiously identify the different aspects of the video image, our brain categorizes how it looks.

Super HD Blu Ray on a nice HD super TV is a new kind of image, and frankly I'm not sure I prefer it.

I must admit, I loved me some NBA Finals in HD though.