In your run how does the Malibu beach episodes work? Zack and Kelly seem to be apart - but that doesn’t happen until the last dance?

I know this post is really old. But I have been trying to find the correct order for saved by the bell and in 2020 it still doesnt exist anywhere because the production order with Tori doesn’t make sense. But in the order you have posted here, which is the closest I could find still has “The Last Dance” and “After math” after the summer which included zack’s birthday which was after Zack and Kelly broke up. Do you have a more updated list somewhere? I saw someone mentioned it in the comments above, but it was never corrected.

I just saw the part about moving the Malibu sands to the summer between grades 10 and 11 because of Hawaiian summer being between 11 and 12… this is just something thats always going to not make sense. Unless you say Hawaii happened after graduation and forget the going back to high school and just have it go to college years…

OK, I moved Malibu Sands back where it belongs between grades 11 and 12, and made Hawaiian Style a Christmas vacation, with Day of Detention setting it up. Moved some other episodes around to match up with holidays, school dances and the like. Here are some examples:

10th Grade:
Put The Prom before Blind Dates because Kelly hasn’t yet chosen Zack or Slater in Prom, but are closer in Dates.

11th Grade:
Cut Day is in September, because Screech mentions it being the anniversary of when Gilligan’s Island was cancelled.

Moved Operation Zack to before Love Machine to account for Lisa’s absence (She was still volunteering at the hospital from Operation).

And lastly finish out the season with the six summertime ‘Malibu Sands’ episodes (Zack’s Birthday Party thru The Last Weekend).

12th Grade:
The Fight This episode has to be first, as Zack mentions it’s the first day of school.

Best Summer of My Life (a retrospective of the aforementioned ‘Malibu Sands’ episodes. Kelly and Jessie only “appear” via a phone call to Zack. Zack mentions that it’s the first day of school. Zack talks to Jessie on the phone and says that he will see her tomorrow. Even though I have the next episode as a Tori episode, we can assume he sees her off screen.

I tried to alternate Tori and Kelly/ Jessie episodes when possible. I put Student-Teacher Week and Drinking and Driving together because a big football game is mentioned in the former and the homecoming dance in the latter. These may be the same event. Also, homecoming is usually near the beginning of the year. Then I have Bayside Triangle and Masquerade Ball together, because it seems the latter is referencing the former.

In Day of Detention, it’s probably close to Christmas by now. Zack (supposedly) wins a trip to Hawaii for him and his friends (we can pretend that it’s only because Mr. Belding was going anyway for his principal convention and he had extra tickets. I guess Tori couldn’t make it). Perfect set up for the Hawaiian Style movie (kinda).

Isn’t it Romantic (Valentine’s Day) and The Senior Prom events are near each other.

And then of course the series has to end with Graduation followed by The Time Capsule. To be continued in The College Years (and The New Class)!

I think Ady or 007 (close enough) needs to chime in here, this is getting a bit out of “hand”.

This is just confusing. Their arms are the same in RO as in ANH??? What adywan did was chnage who’s arm got chopped off, to match what happens in the scene. We see Dr Evazan pull a gun to shoot Ben, then Ben cuts at Evazan and Ponda’s arm ends up on the floor with the blaster. So Ady switch the arms to make it so that Evazan’s arm is on the floor, becuase it makes more sence with what we saw happen. It was a mistake born form Geoge Lucas’s inexperiance with fight scene at the time, quite why he never thought to adress it as one of the many chnages he made in his SE I can’t fathom.

Right! No one is debating what someone’s arm looks like! It’s that the movie showed the wrong dude’s arm getting chopped off. That’s it!

But A New Hope takes place after Rogue One…

I know? All I’m saying is that since he has that arm in Rogue One, it’s the most accurate one to have in the scene in A New Hope.

The first image doesn’t work for me.

Do we know what the status is on the Cantina Arm, the one Obi-Wan chops off? With Ponda Baba’s Rogue One appearance it seems the original arm is the official one, which arm will appear in Revisited HD? Either way I like the change of the cauterized wound on the severed arm.

How does those guys’ appearance in Rogue One change which arm it should be?

Not sure why someone put “released”, in the title, as I never finished this project. I will get to it eventually.

That was me - my apologies.

Kinda. Sorry I didn’t see your reply until now. So all 4 movies are available now, as well as two more specials on the Emmy Nominated collection. I haven’t done anything on this in a while, but when I get on my PC, I can tell you what I have so far.

Sorry about that. They should now.

…I put it in the ‘Released’ category - so that anyone interested in the project can read through the thread to see which parts have been released and made available - and which are not (yet).

I see. I guess I should have been more clear. Here’s how that post of mine should have read:

Kinda. Sorry I didn’t see your reply until now. So all 4 movies are available now on retail DVD, as well as two more specials on the Emmy Nominated collection. I haven’t done anything on this in a while, but when I get on my PC, I can tell you what I have so far.

Everything up there was in reference to the retail movies/ shows being released, which weren’t on DVD at the time I started this project.

Also, the “links” being referred to were just sample images.

Not sure why someone put “released”, in the title, as I never finished this project. I will get to it eventually.

Not sure why someone put “released”, in the title, as I never finished this project. I will update the chronology eventually, as well (kind of) start over using the newer Shout Factory set. When I envisioned this project, I had no idea about the syndication edits.

Does anyone have any of the foreign released sets? Do they have the full broadcast episodes on them? The newer Shout set still uses the syndicated episodes, but it does have Miss Bliss and more bonus features.

If no DVDs are uncut, what about VHS? I can’t seem to find a list of the released VHS episodes. Does anyone still have all of the episodes recorded from their original NBC airing?

Sounds like a challenge! Ady, get on it! Haha

Very true, and it would only need to be for a few minutes.

Something I just recently thought of that probably isn’t worth doing- removing Mark Hamil’s scars until after the Wampa attack.

It’s very likely that I will make a new version of this edit. I used the only HD version available of THIS ISLAND EARTH at the time, which was the foreign release.

I would also like to try to better upscale the host segments and correct some Shadowrama glitches that are bugging me.

In the meantime, I try to reply to anyone who sends me a private message with the links 😃

Hey if you need any help for non spleeners, I have it up on mediafire in 5 parts as well.

None of you have myspleen, I take it?

99% sure that release is the one that was used for this project.

Wow, so sorry to hear this. I will certainly keep your family in my prayers.

Thank you so much!

I’d like some prayers for my niece’s family. She was only 6 months old and died in her sleep on Monday. It was really very sad and tragic. I’ve set up a GoFundMe for the funeral expenses. www.gofundme.com/f/babysafarijackson

I know no one knows here her, but my 6 month old niece died on Monday. It was really very sad and tragic. I did set up a GoFundMe for her. I would appreciate any shares and/or donations. https://www.gofundme.com/f/babySafariJackson

Anyone ever done or thought of doing a fanedit of the US The Office (Steve Carell) into the in-universe documentary the characters on the show watched? 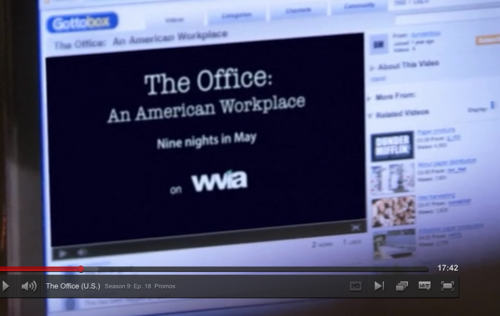 Looks like it was a 9 episode mini-series. The show had 9 seasons, so one episode per season? Would be cool to have nine 1 or 2 hr long documentary-style episodes, complete with WVIA PBS logos, and maybe taken from a real PBS doc. All we really know aside from that screenshot; from a little bit of the audio that was heard, we know that the documentary episode 1 started the same as real episode 1, and that no footage should be used from the real show after the in-show documentary has aired.

Personally, I can’t wait for the Blu Ray editions. 100% physical media for me, all day, every day. I just NEED to have fancy menus and cover art. I NEED it, I tells ya! I’ve actually held off on watching any version of Revisited until Ady releases them in Blu Ray format. But this 1080p news is pretty great, even if my stinky eyes can barely tell the difference between SD and 4K.

How did you get the commentary to sync? Did you add New Line Home Video and Dolby Digital intros before the movie (since the commentary plays through them)? That’s what I actually just did just now, when I synced the commentary to 1080p video, since I didn’t think anyone else did it yet. I hear the Laserdisc DTS sounds much better than the DVD or Blu Ray. I’m guessing you used the commentary from YouTube, as I did? I think I own the LD?, but if I do its in storage. I know I had the LD in my possession at some point, but it may have been a rental. In any case, even if I do, I don’t have a player or capture card anyway.

In any case, PM sent!

I have a 1080p version of this film with the HD Disney+ version of the song reinserted.
The sound is 5.1 surround.
I can send file, Please message me if interested.

I also have the TV Version with several extra/extended scenes which i can make a full extended version if anyone is interested?

I would love both of these! Thanks in advance! The scene is widescreen?

Hi, thebutcher! Would you have any interest in taking on combining the best elements out there for the remaining 11 unreleased episodes? I have four I recorded back on S-VHS back in the day, plus an undamaged Lost Continent.
Now that Shout Factory put out a disc with all the host segments from those episodes, it seems like some sort of preservation project is possible now.

So presumably the audio would come from your S-VHS tapes, but what about for the other 7 episodes of the 11?

Could really use this.

Is this still available?

Is it still possible to get a link to this cut?

I have this edit, and I can put it online if the OP doesn’t respond. It’s also on the 'Spleen.

Guys, if you haven’t taken the hint, PM TheHutt please.