Can I get a link to the latest version of this?
I can’t wait for the final cut!

Gina Corano does not own the character of Cara Dune.

Dune may well appear in animation.

Here’s the Kylo Deleted Scene integrated into my edit in what I’m hoping is a final form:

If this is acceptable there’s just those couple of shots near the end of the film to complete (as well as any Restructured changes I missed)!

If I was to nitpick I’d say add a tad bit of colour correction to the new cockpit shots but otherwise, looks and flows great!

Here is the puppet show! It’s very short, but hopefully people will think it’s worth all of the effort. I’m sure I’ll need to tweak it some more, so I’m just gonna share a streamable link until it’s finalized.

Also wanted to note who all contributed to this very small edit.
I may be wrong, but I believe DZ-330, Cinefy and DominicCobb all had this idea at one point or another.
Proof of Concept by Cinefy
Clean Stage Plates by poppasketti and MoviesRemastered
Puppet Designs by Captain Faraday
Alien Dub by ThisIsCreation
Produced by RogueLeader

This surpassed all my expectations.

For reference, this is Palpatine’s plan in the original script pre-reshoots. According to the JediPaxis leaks.

After obtaining Vader’s device Kylo travels to the place specified by the wayfinder. It takes him to the Unknown Regions and a dead planet of flat, black rock. I previously reported that the planet where Kylo finds Vader’s wayfinder was called Exogol. Since then my understanding has evolved and I’ve been told that this planet actually bears that name. Kylo lands outside a giant cube, floating just above the ground and begins walking toward it. Kylo walks between the cube and the ground and once he reaches the center he discovers an elevator leading down below the planet’s surface. He follows the lift down and finds an old man, near death and lying in bed and being tended to by cloaked aids. My source believes these aids to be referred to as Sith Loyalists. The old man identifies himself as Darth Sideous. Kylo initially dismisses the old man, knowing that the Emperor had died over 30 years prior over the forest moon of Endor. Feeling that this must be a trick, Kylo claims that there must be some other explanation, such as this man being a clone. My sources specifically tell me that the Palpatine refutes the idea of him being a clone and affirms that he survived his fall. After his defeat at Endor, he left the known galaxy and traveled to the Unknown Regions to rebuild his Empire. Despite his skepticism, Palpatine begins to reel Kylo in and subsequently tells him of something known as a “Force Dyad”. The Force produces two incredibly strong users and when they unite together, both become stronger than either one could be on their own. Palpatine believes Kylo Ren and Rey to be the two halves of this dyad and shares this knowledge with Rey. (Note: I previously wrote that Palpatine wanted them to become “master and apprentice” since then this has been clarified to me as Palpatine seeking the two members of the Dyad) Palpatine claims that he seeks the Dyad because he is weak and dying and he wants the Dyad to rule together once he’s gone. Palpatine orders Kylo to bring Rey to him and turn her so that the Dyad will be a strong, unified force of darkness. Palpatine also reveals that he has been amassing an armada of Star Destroyers equipped with Death Star tech, each one capable of destroying a planet on its own. Generals Hux and Pryde are tasked with rounding up children in large numbers to train and staff his armada.

“Mace, your in with the voices, but we do not grant you the rank of Force Ghost.”

Uhm…guys
I think the Vader comic just revealed from what Snoke was cloned, or more precisely, from who…
https://www.reddit.com/r/StarWarsLeaks/comments/n0av5k/darth_vader_11_by_greg_pak/

I saw this supposed inside leak on what happened with the Sequels and some of it rings…plausible?
https://www.reddit.com/r/starwarsspeculation/comments/mo2wzv/what_happened_with_the_disney_sequel_trilogy_and/

Take it with crane of salt regarldless.

Edit: All the stuff about Lucasfilm seams plausible, When he starts getting in to TROS…not so much.

I have to say that I’m a bit worried about the writing for this show.
Joby Harold’s writing credits seem to be average at best, from Awake (also starring Hayden Christensen) to King Arthur: Legend of the Sword. What’s even more worrying is that this will be his first time writing a Tv series…certainly a headscratcher for me.

…Moving backwards in this case.

When planning a scene of Rey’s house at night, I considered placing a drawing of the island on the wall to hint at her reference to the island in her dreams later. Now that this scene isn’t happening and I’m returning the daydream/vision scene from before, I thought it might be neat to have that drawing as well. So here it is:

This is just amazing, the music, the visuels, everything. Kudos.

I guess we will never know.

There’s no better way to reveal Palpatine in The Rise of Skywalker than this.
https://youtu.be/3XHsNkgsPzM

James Clyne of ILM on Instagram makes it sound like the TROS quick ending montage was not planned based on the fast request.

According to him the scale of the destroyer in the Bespin shot is “waaay off”.
https://www.instagram.com/p/CMca_FAjBBv/?igshid=75pd9skzkp8c

Sooo, this sequence took a while, but luckily its the last (and most difficult) link sequence. It takes the story from The Tragedy to The Rescue (The Believer has been cut).

I have changed the sequnces at the end of The Tragedy and start of The Rescue, and altered most of the dialogue between Mando and Cara on Nevarro.

This just leaves the opening sequence to sort, and tidying up of the landing on Trask. A version for test viewing will be available soon.

That looks good! I would maybe put the recruitment of Bo Katan prior to the message to Gideon, as it feels a little too ping-pong between the Empire and Mando.

Part of why that hologram from Mano works so well in the episode is because they stole the info, but without The Believer, and it just being Cara Dune and a Google search, it doesn’t really warrant the astonishment from Gideon that he’s been found/contacted. You might be able to delete that scene entirely. If you did, Dyn could recruit Cara before Gideon intimidates Grogu, after Boba commits to helping him.

I would like to give Palpatine his own scene in ROTJ, have him talking to one of his loyalists. Telling the loyalist to meet him on Exegol.

Take the scene where Palpatine is sitting looking out of the death star. Get a palpatine impressionist to say the line. Deepfake Palpatines mouth and we’re golden.
Also, Record someone dressed up as a Palaptine loyalist for the scene.

Joonas Suotamo confirms in his new book, “My Life as a Wookiee”, that he and Adam Driver filmed a now-deleted scene for “The Rise of Skywalker” where Kylo Ren tortures Chewbacca
https://i.redd.it/p5tgbvh1w1l61.png

Exegol in Red, with Blue Lightning and Blue Sabers
https://www.reddit.com/r/StarWars/comments/liluev/alternate_universe_clip_exegol_in_red_with_blue/

How to get an epileptic seizure 101
https://youtu.be/ECPSdFbUsEo
Red and blue like that is a serious issue. Agreed that it looks pretty cool though.

Lol Yeah, even the original was barely watchable in the theatre.

Maybe green lightning instead of blue?

Exegol in Red, with Blue Lightning and Blue Sabers
https://www.reddit.com/r/StarWars/comments/liluev/alternate_universe_clip_exegol_in_red_with_blue/ 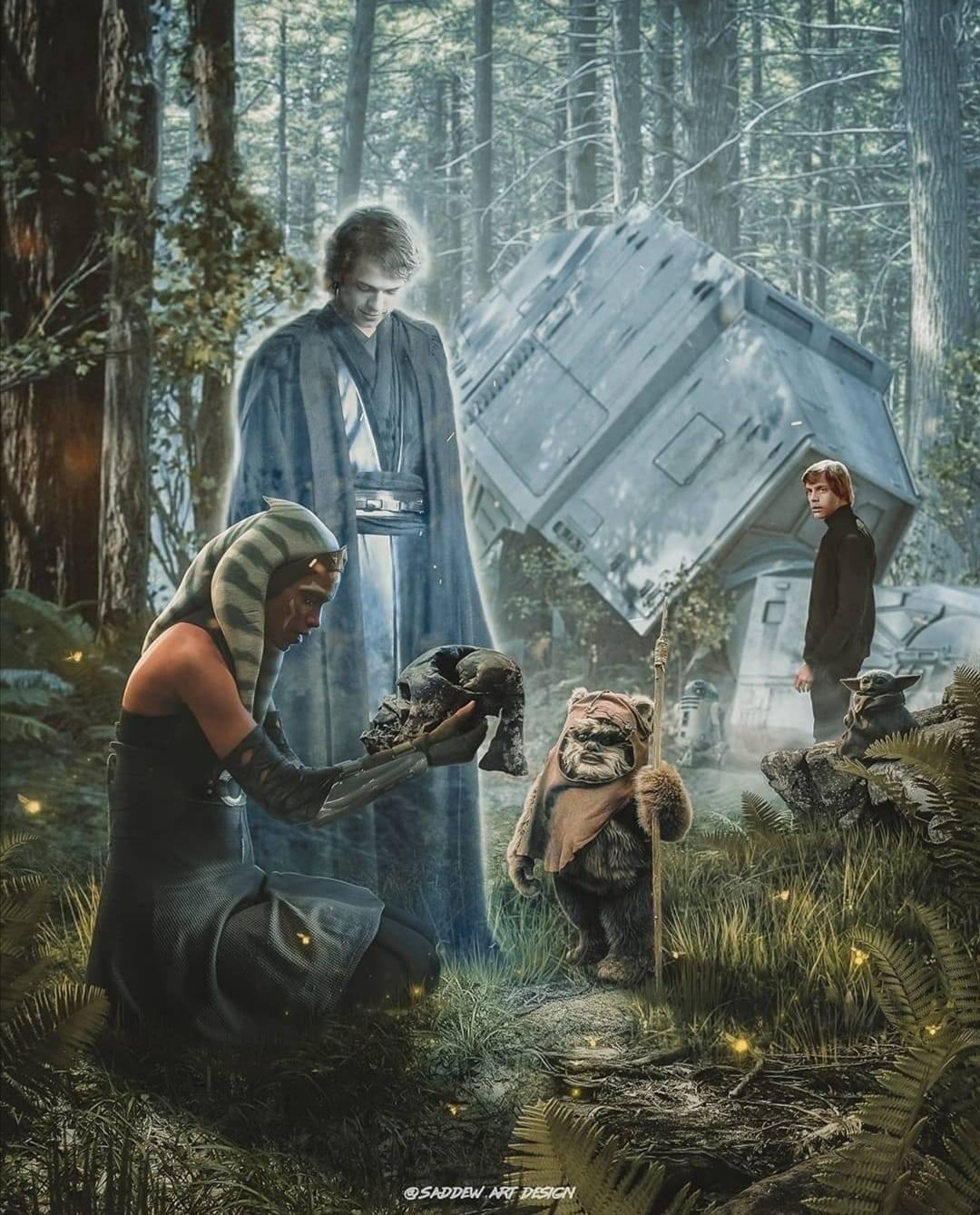 RogueLeader said:
Even though it isn’t as dramatic of a start, I thought it would be interesting if the film started off with Kylo on the bridge of the Star Destroyer, and as he staring into the abyss, he hears a whisper of mechanical breathing. It cuts to him in his chambers, unsealing Vader’s mask and placing his hand on it. He gets a brief vision of Mustafar, Vader’s castle, the chest that contains the Sith wayfinder, and maybe a brief glimpse of Vader/Anakin himself. He also hears the voices of Vader, and maybe Snoke, to better set up Palpatine’s line about being the voices in his head. Palpatine, through the mask, is leading him to the Wayfinder. It ends on a haunting echo of Vader saying “Join me…” which transitions into Rey’s meditation scene, with her chanting, “Be with me.”

Star-Forge, star-destroyer factory…
Might as well make Starkiller and Exegol the same planet 😉

Corridor Crew| We Made a Better CGi Luke Skywalker