I have no idea where to even begin with editing TROS, but I am very hopeful that one of you amazing people will someday be able to turn this entire sequel trilogy into an enjoyable 3-4 hour edit or a two-parter.

First act ending with SKB etc, somehow twist Snoke actually being Palpy… I don’t know. Crossing my fingers that someone will find a way to salvage this.

I have a feeling those were also the last words Abrams heard after leaving the final meeting just before shooting.

Speaking of reduntant dialogue… any idea what Finn wanted to tell Rey before “dying” by the way? It was even brought up a minute later in the tunnels, but he never actually said anything in the end?

I’m glad this movie was as awful as it was because now I never have to watch the sequel trilogy again.

The Saga: Star Wars with Tommy Wiseau - The full story

Not gonna lie… hearing Duel of the Fates gave me goosies right away.

Arggghhh… I can’t take it! Only a few more hours for the next episode… this has seriously become the highlight of my week. I don’t know if that speaks for the quality of my life, but… still…

‘John Boyega Admits His ‘Rise of Skywalker’ Script Ended Up on eBay’:-

(a few more videos of John Boyega’s GMA appearance on there too - https://twitter.com/GMA)

Just as I suspected, it was just marketing. But I gotta admit, that was a clever move by the team. In today’s episode of the Star Wars Show, Andi and Anthony went on a “shopping spree” on eBay for Star Wars merch. Most scripts are on iPads these days so “leaving it under a bed and a cleaner blaa blaa” sounded a bit weird right from the start.

If that “They fly now!” clip was intended as a tease of cool / funny moments to come… I gotta admit… I’m more excited for next Friday’s episode of The Mandalorian. I’m still trying to find some reasoning on why that specific clip was chosen (to build hype / get people excited). I shouldn’t be that surprised though since the “SNL cringe” type of humor has not landed for me at all in this trilogy. General Hugs… ughhh.

Ady… is it too late to add in “MACLUNKEY” in this new version? 😂

According to Twitter there is a trailer dropping tonight (10/28/19).

Haha, after seeing two trailers I still have no idea what’s going on. I’ll see the movie opening weekend for sure, but The Mandalorian has stolen all my attention and hype. TROS seems like a Happy Meal in comparison.

My first reaction to Mike’s time-travel prediction was “Ha, yeah right!”. Then after hearing him list the deflector shield, Palpatine’s laugh, the medal, Luke’s destroyed lightsaber… it wasn’t that funny anymore. Also his other theory about Palpy possessing Kylo gave me a headache. But overall, I’m currently in a pretty good spot with the story because it can only get better from here… or well, it could always crash and burn in flames… but that’s unlikely.

EDIT: The deflector shield and the lightsaber are things which can be reforged easily.
I forgot the lightsaber was only split in half, not blown to smithereens.

I really don’t know which one is worse… the edit itself or the comment section in the announcement video. I am just glad this project is finally over and I wasn’t even surprised that it turned out to be a turd in the end. The Patreon supporters must be overflowing with joy. But yeah, this edit was initially directed towards the ultimate TLJ haters so… good for those who can find some solace through this professional film editor’s version… I guess?

Yeah, this was a cool piece of work and everything… but the comments section is just too much as always.

“Wow… this reignited my love for Star Wars!”
“OMG, this is better than everything Disney does!”
“They should make a new Special Edition just to add this!”

Yes, the 012319 version is currently the latest. Every file should have a date in the filename. If you have an older encode, that would likely be the reason for there to be slight variance in file sizes… but not sure how that would happen if you only downloaded it once!

Thanks buddy! If I had a brain, I could’ve just sorted them by date and see which one was the newest. 😄

If you don’t mind me asking, have you had any new ideas or changes in mind to warrant a new version? In my opinion the edit is overall truly fantastic, but I’m still kinda shipping for that Hux-Poe convo to return to its Legendary state. The “skinny, pasty guy” part still makes “oof!” even when I try to tell myself that it’s tolerable, haha!

For some reason I found multiple Rekindled files on my hard drive and they all have a 300-400MB size difference. It’s weird since I’ve only downloaded this once. The file ending with 012319 is probably the most recent version?

I just watched a couple of interviews with Gina Carano and I gotta say… I’m so excited for her. She is radiating with such an honest, grateful vibe (also damn gorgeous!). She admitted that she’s a total newbie when it comes to all the lore etc, but she was enthusiastic to absorb all the information Filoni and Favreau provided her. I know she hasn’t been the best actress around (she’s an ex-fighter after all) but if you need a female who you can believe to kick some ass, Gina Carano is the one to hire. Hopefully this will be her best performance so far.

I’ve never been that interested in TCW or Rebels, but I could easily imagine myself jumping in if there were movie edits of the shows. Does anyone know if there’s someone in our midst who is / has been juggling with this kind of an idea? A story arc in a single movie or two with all the filler cut out? To me, that would probably be the most enjoyable way of watching (or just look up all the filler episodes and skip them). 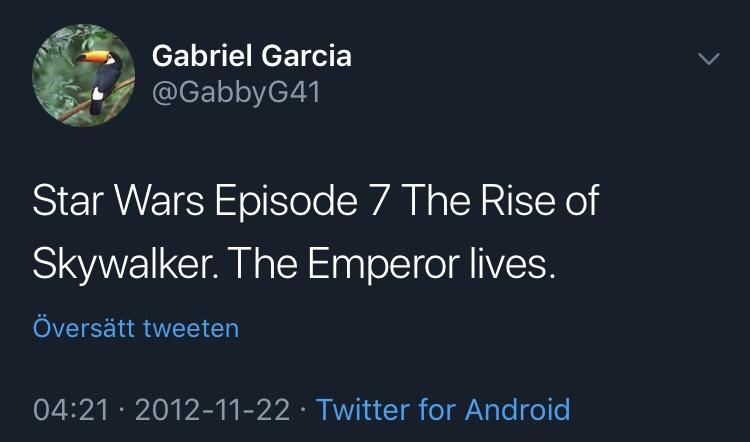 Okay… after seeing the panel, hearing about the Akira Kurosawa, Sergio Leone, Clint Eastwood influences and seeing some stills of the characters… this is hands down the most exciting thing about Star Wars easily. This show seems to tick every box for me. It’s going to be a long wait till November.

Okay, here’s my theory. There’s a big showdown in the guts of the Death Star, all the Force Ghosts are present, everyone’s about to be blown up or something, and then Kylo has a big change of heart and self-sacrifices so that his beloved Rey (and co.) can escape. As he does so Palpasnoke is screaming “no, you are Master of the Knights of Ren!” and Kylo - just a Leia’s theme/Force theme mash-up swells - says “I am a Skywalker, like my mother before me!” before going kaboom.

When the Knights of Ren were mentioned the first time, I always expected them to be like mini-bosses in each film. Then have the classic final boss fight vs. Kylo in Episode IX. But that’s just too generic, I know. I’ve played too many video games, haha!

I’m just amazed that they have had only one appearance so far (in a Force vision, of all things). Now that I know Palpy is back, I don’t know if I really care about the Knights anymore. I think I would’ve liked seeing Rey take on the Knights + Kylo in the final act rather than Darth Sidious playing mind tricks throughout.

By the way, what are your guys’ thoughts on the theories of Palpatine just being a mere front for Plagueis all along? Or Palpatine being Plagueis himself / resurrected über vers. 2.0?

If TROS is truly amazing, could The Last Jedi become sort of Attack of the Clones for binge-watching? I wonder if you can enjoy 4, 5, 3, 6, 7, 9 without losing too much of the story? Probably a futile thought because we have amazing edits already available which make 8 quite enjoyable.