The opening was pretty sweet. Good job. We solute you.

Just watched the Theatrical Trailer. Favorite line:"You love me. I LOVE YOU!"

I've updated the list slightly. Tomorrow I will post a short list of the major scenes and shots that I'll be cutting from the edit as well as some shots, like jar jar's "did he crashed", that will be altered to remove a certain someone.

Allow me to rephrase...

Dad, what are you doing on the internet?

Is that some kind of joke perhaps?

I also just found one that might work well with my mac: http://mac.appstorm.net/how-to/video-how-to/how-to-rip-blu-rays-on-a-mac-a-complete-guide/. This might also come in handy for me.

Thanks Frink. Reading it, it sounds complex, but probably not. The one thing it did not tell me was this: do you put the BD in the Blu-ray player or the ROM tray on the computer itself?

Does anybody know how to get the video files off of a Blu-ray Disc?

If I were you I would cut the "Roger Roger" during the battle. If there is a control ship controlling the droids then voice communication is needed only for interacting with people and droids who are not part of the droid army.

Only one Podrace lap. Most of all three laps will be included, but the scenes of them going threw the start\finish lines will be cut.

Please tell me that you are cutting out the two-headed commentator.

Jabba the Hutt will not be seen. Why? Because people, including myself, had to wait a long time to finally see what Jabba looked like in ROTJ. He was mentioned in ANH and TESB, but the mystery of what he looked like remained until we saw him. So he won't be seen at all in my edit.

Well, for the "Roger roger", I was going to (1) keep the shot but mute the line and restore the music, or (2) move it some where in the hangar battle.

The 2-headed alien will and will not be cut. What I mean is that he will be heard saying some lines, like "anakin is forced on to the service ramp" and "looks like some tusken raiders...". The alien is suppose to be comic-relief, and it is, to an extent. Some lines like "that has got to hurt" and "the crowd goes nuts" are not needed.

I actually reconsidered my decision of cutting out Jabba. So I'll be inserting him back in.

So I've done some calculating with the DVD version today, and I'll be able to cut off around 30 minutes so far. This is mostly the Jar Jar and Gungan scenes. The Gungan plot is going to be completely removed.

I haven't started editing the Blu-ray version. That's the version I'll be using because it basically has some of what I want fixed.

I love the CGI X-Wings and TIE Fighters. They look far better than the original ones. The droid moving across the screen in the original Mos Eisley was enough. We really don't need a Jurassic Park T-Rex make a cameo in Star Wars.

What you should do for the opening is some Star Fox 64 things. This is a video I found that shows it: http://www.youtube.com/watch?v=rJom15pCF6c. It combines ROYJ with Star Fox 64 for the Battle Of Endor. Doing something like this for the beginning might be great.

Here's a few ideas of my own:

Now that I think about it, the snowspeeders should be slightly changed. The change goes with the windows. On the inside, the light passing through the windows is too light. The windows are darker. So shouldn't the inside cockpit shots be darker that the original release?

Ah, I see. I've never seen that one before. It would be nice to see K-3PO have his own scene. Well, when I say "scene" I don't mean to add in a pointless few seconds of the droid. I mean to see K-3PO walking around Echo Base doing stuff with a little dialogue here and there. Not loud dialogue, but just some extra background noise to give Echo Base an even bigger atmosphere. Know what I mean?

I remember having the Topps bubble gum card of this shot... and there was another card that showed him & C-3PO together.

You must mean this one. It's included on Star Wars: Behind The Magic. 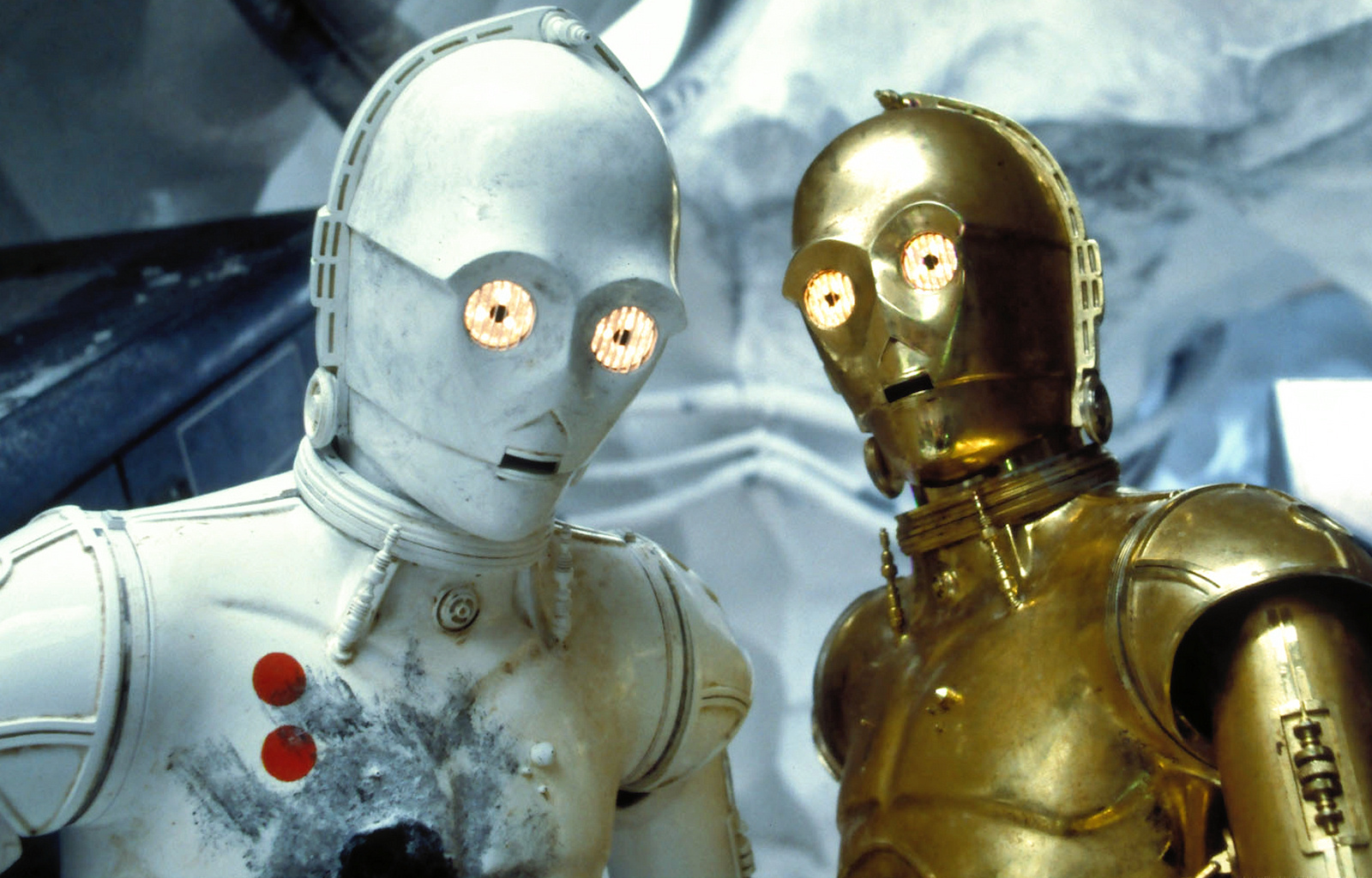 The shot of the shuttle leaving bespin and flying towrds the executor does not mess up the music...

The other 2 shots Boarding and getting off on the deathstar are horrible, ridiculous and mess up the music entirely.

We all agree with you, but there is a way to edit the music and not have it sound all weird and full of bad cuts.

The name is Krayt Dragon.

Damn, looks like i misspelled the name. time to change it.

This is a Kyrat Dragon:

You know that skeleton that C-3PO walks past? That's the fossil of a Kyrat Dragon.

If Lucas hadn't sold the films to Disney, would the next release have replaced the Krayt Dragon call with the sound Jar-Jar makes before diving iinto the water in TPM?

I take it you haven't kept up with the thread, based on numbers 5 and 6.

Yeah, I've been away for a few days. My bad.

Anyway, the scene should have had Vader mumbling under his breath, with a few curse words slipping out.

Thanks for correcting me. I've changed it to the correct structure.

Now for Vader's curse words. Vader could have said "Bring my mother-f@%$ing shuttle. Alert the crew of my f#%@ing Star Destroyer to get their asses together and prepare for my goddamn arrival." LOL. And now imagine Vader saying, "No. I am your damn father! The midi-chlorians blood tests prove it. Now stop playing on that damn windpipe and go study your goddamn history."

Here's a few ideas i just thought of:

Taking out the whites of their eyes and toning down the colours make them less like cartoons.

Very good ideas. I've add them to the list. But that I think about it, maybe I'll change the white eye parts to green, red, purple, etc. Maybe make the color a little bit bigger.

A few (ridiculous) audio changes and a (ridiculous) boulder?  Please.  It's not even on the same order of magnitude as dinosaurs roaming Mos Eisley and CGI Jabba.  It's like Lucasfilm has relegated the task of destroying film history to its interns.

Why some people were apparently cool with Jedi Rocks but were suddenly up in arms about Vader's "Nooo" was always kinda baffling to me.  If I knew anyone who walked out of the theatre in 1997 happy, I'd have no hesitation recommending the Blu-rays to them.

Yes. I think that Lucas has been intent on destroying his films. Maybe the next Special Edition will have a bunch of Jawas and Dinosaurs walking around the Death Star. I would love to see that. (that sentence is sarcastic.)

Jedi Rocks is another different matter. I like the song, only the song and not the whole animated scene, for one reason: the song is catchy. But I don't get why Lucas just didn't keep the Lapti Nek song and just replace the puppets with CGI characters. I admit that the puppet Sy Nootles always moved a little funny.

Now, the Blu-ray is fine, but there's just a few things I hate. Besides the bigger Jabba door, the "No", and a few other things, I hate the ship boxes. If you don't know what I'm talking about, put in BD IV and go to where the Falcon takes off from Tatooine. Watch the Star Destroyers carefully and you'll see some weird brown areas. I hate those. They're in every shot of a ship.

What should have happened in the Special Editions is this: Vader says "Bring my shuttle", then we see the SE shot of Vader walking to the ship, be the ship is not stationary, it's starting to land as Vader is walking. This way, the music is not really looped in a funny was and Vader still sounds pissed off.

Now for the shots of the shuttle going to the Star Destroyer and Vader leaving the shuttle, these shots should have just been added to the end of Vader walking to the landing shuttle.

Nothing has so far benefited ROTJ. Every single change has little or no redeeming value. The new closing music is okay but the glimpse of other planets makes me wonder if Luke tweeted the Emperor's death or something because those celebrations sure came together quickly. Hayden as Anakin's ghosts, Jedi Rocks, "No... Noooooooooo!", they're all retarded.

I think Lucas added Vader saying "No" to connect with the (rather hysterical) "No" from Episode III. But what Lucas doesn't realize is that you don't need Vader to say anything before he grabs he Emperor. When he grabs the Emperor, Vader is already silently saying "No."