For Bob’s Fetts new death, like with all other SW characters that have died throughout the film’s, it should be a moment of doom for the character not a comedic one.

Should the binary sunset shot from ROTJ be moved closer together to match what was shown in ANH and not spaced out? Also, the bottom sun is on the left side in ROTJ while ANH has it on the right side. 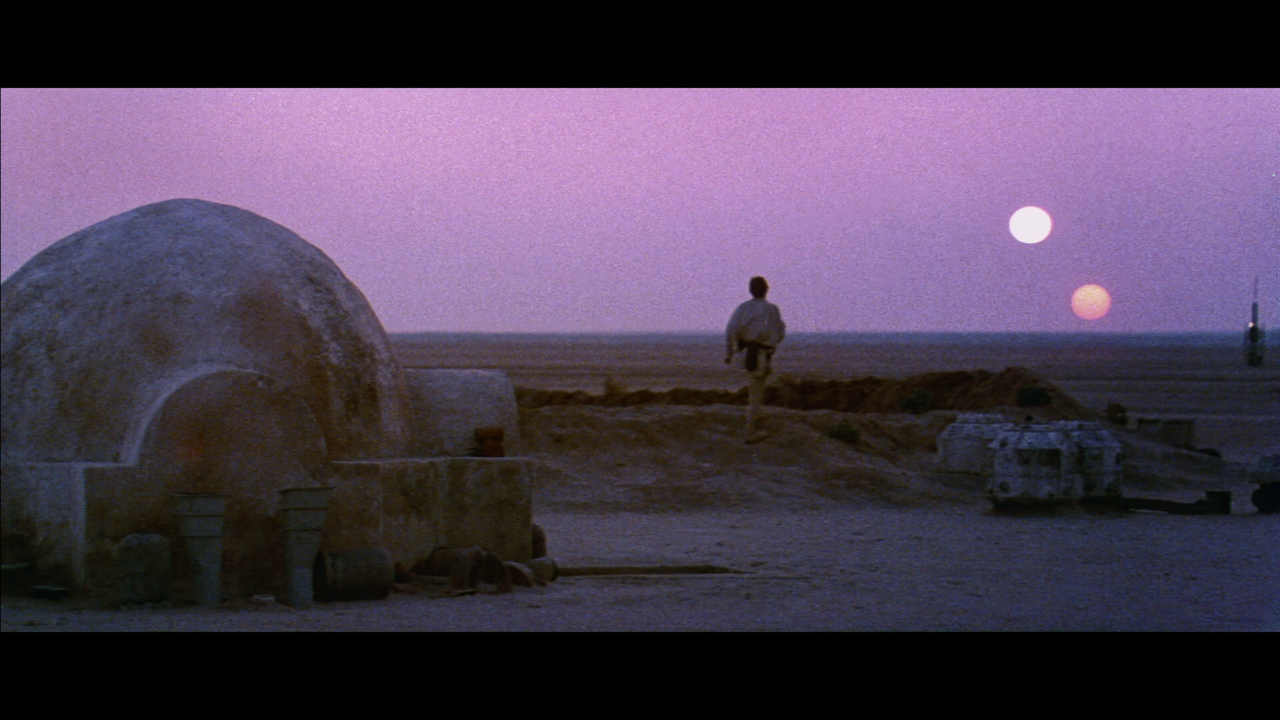 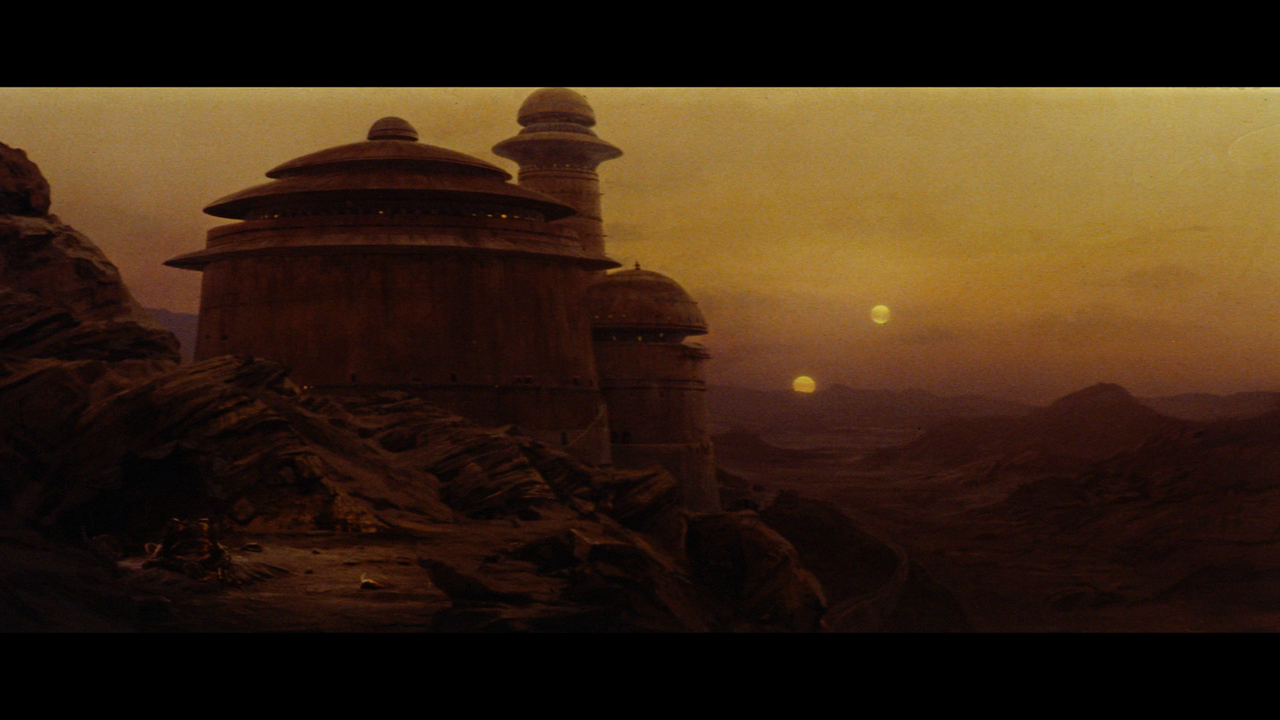 The Laserdisc of E.T. is the only version to contain the deleted scenes of Harrison Ford as the Schools Headmaster in a scene with elliot.

Unless I’m wrong that’s included in a documentary not the film itself.

A laserdisc Version of Jaws TV cut (Not Sure which one) contains the opening unadjusted sunrise killing of Chirissie Watkins instead of made to look like night time. When Hooper is Pulling faces whilst climbing the Ladder on the Orca a unique splice to Quint rummaging through his fishing tackle box which matches the sound mix so one can assume this Spliced footage is missing from the theatrical version and the opening sunrise makes the first scene a little more graphic.

I’d like to know which laserdisc release actually contains this footage.

Need to look more into this

MTV animation Aeon Flux has had some Sound altered from it’s original Broadcast versions when released on Home Video.

How does it appear on the DVD?

How can I get ahold of this fan edit?

I’ve always wanted to know, is there a way to fix instances where the mouths don’t match the spoken dialogue?

In Blade Runner: The Final Cut a digital correction is made where a stand ins mouth is used to correct a scene so that Harrison Ford’s talking mouth matches the dialogue correctly.

Could the same be done using a 2D mouth effect?

In this interview James Cameron says how he didn’t like how the beginning of Alien 3 killed off everyone but Ripley that survived Aliens but then made the same thing happen in Terminator: Dark Fate

I know this is something that has been suggested before, but it would be interesting if Endor was a little closer to Endor Prime in certain shots (maybe not as close as Yavin) to help remind us that this is the forest moon of Endor. I think the planet also has like 8 other moons, so seeing the Endor gas giant and its other moons in certain shots of the sky or in space could help make Endor feel a little more “alien moon” and a little less “Northern California”.

But I’m not sure about showing the other 8 moons.

In this shot Luke’s saber goes through the railing here without damaging it.
http://www.youtube.com/watch?v=pVWGmQgHDZc&t=2m17s

The engines of a Y-wing that passes here in this shot are not light up
https://www.youtube.com/watch?v=zG2PL3bUH1s&t=1m04s

When the shield generator explodes, a piece of shrapnel flies towards the left side of the screen and then bounces back off from the inside of the wall it was housed in.
https://www.youtube.com/watch?v=BN3kISlsSCQ&t=0m09s

Would it be possible for this scene to be reshot to include a gloved hand?

The DS crew in this scene are all wearing black gloves but then in the next shot a gloveless hand is shown pushing a button.

Adywan, you could use your own hand for that shot.

Unpopular suggestion: can Ady cut the crying rancor keeper? I’ve hated it since I first watched the film and its removal would help reduce the bloat of the Jabba section.

Might not be as unpopular as ya think. I hate it too.

I have an idea: when Vader witnesses Luke being electrocuted by Palpatine, he should say “Leave my son alone.” instead of “NOOO!!!”. What do you think?

Vader shouldn’t be saying anything at all during that scene.

According to this video, during the production of ROTJ certain scenes that had been scored by John Williams had either been replaced by a different score or was completely removed from the scene.

Should this scene of Luke speaking to Obi-wan on Dagobah have a score in it or left as is?

Who exactly was Yoda talking about in this scene from TESB in Yoda’s hut?

Is he talking about Obi-wan? Anakin maybe? Or about Luke?

Please take into account that the continuity of the PT didn’t exist when this scene was written.

To me it needs to be more stronger on the “mmm” sound for Mother.

adywan said:
35 - Fixed a shot of R2 after he is captured where you see the mark of a restraining bolt before it is attached. In some previous shots it is also somewhat visible but I was unable to fix this.

Hi adywan,
You mentioned here that back when you first worked on ANH:R you were unable to fix some shots of the restraining bolt appearing on R2 before he’s captured.

Were you able to fix this now for ANH:RHD?

Listening to the “Your mother…” clips and from picturing how the ending for ROTJ:R will be shows how this edit shouldn’t just be about the technical stuff but also on what would give the story more depth.

I doubt it, as he says he got it from a friend.
He also doesn’t use the term “Despecialized Edition”, but it’s clearly what he’s describing.
He also takes jabs at the Special Edition.
https://www.youtube.com/watch?v=z8FMzHAuthM
Mostly talkin’ classic horror. Great listen if ya like that.
Star Wars talk starts at 8:04 (Galaxy’s End, seeing SW for the 1st time)
Despecialized mentioned at 10:01

I wonder if that friend of his is a member here

What if 25 years ago the OT got released on MUSE Hi-Vision laserdiscs?

The way adywan edited the Vader and Obi-wan duel in ANH:R is fine just the way it is with the exception of that score being added to it.

Should Anakin’s lightsaber be red during the duel on Mustafar?

Should ROTJ:R be recreated in the same way PT:R was going to be?

I think he’s wondering if Ady is going to completely restructure RotJ as he was planning to do the prequels.

That’s what I meant

Should ROTJ:R be restructured in the same way that PT:R was going to be?

Is ROTJ:R going to be restructured in the same way that PT:R was going to be?

During the scene when Luke meets Biggs in the rebel hangar that was later added back into the film for the SE, there’s a bit of dialogue from Red Leader saying he met Luke’s father when he was a pilot as a young boy was removed

Since the OT:R exists for the OT alone, is there a possibility reinserting it?

During the space Battle of Endor, there should’ve been heavy casualties from both the Empire and Rebel fleet afterwards, not just a majority of the Rebel pilots surviving afterwards and most of the Empire fleet being destroyed.

For ex. during the Battle of Yavin, there were many casualties to Red Squadron where in the end only Luke, Wedge and a single Y-Wing pilot were the only ones who made it and not a majority of the Red Squadron pilots making it afterwards for a happier ending.