They did the whole movie as well.

Where? I can’t find it anywhere

Any updates on this project?

Doesn’t seem to be.
A new one just about to start over at the other forums though.

What other forums? Link please?

Can get to it from here:
https://originaltrilogy.com/topic/4K77-Released/id/60815

Is the MySpleen link Dead?.. ive been trying it

Looks like it’s there and has plenty of seeders.

THankyou My Dude for sorting out The Mega Link for me, You didn’t have to do that, But I really Appreciate it

Hi I tried to download the videos and for some reason I can’t find them anywhere?

I tried that and it said the document seems to be deleted.

Which link did you try that didn’t work?
From that first post, did you click on ‘the ultimate introductory guide’?
It should take you to a Google doc with instructions you can follow. I guess you need to be logged in with a Google account for that to work. Maybe that’s the problem??

I just tried it and it worked, so I don’t think it’s really been deleted.

Hi I tried to download the videos and for some reason I can’t find them anywhere?

Is the MySpleen link Dead?.. ive been trying it

Looks like it’s there and has plenty of seeders.

Also going forward, might be better if people just PM me instead of asking me in here?

Chewbacca & holiday special stuff starts at around the 17min mark 😃.

Out of curiosity, what’s the resolution?

Haha ok.
Do you want the combined file or the individual 1 minute files?

That was annoying. It’s split up into multiple parts each 1 minute long. I wrote a quick bash script to download all the parts. Works on Linux. I think Mac would also work with this?
And if you have ffmpeg, it also combines them all:

In case that didn’t format correctly when pasting here:

I just ran it and it finished. When it’s done, it had the following files: 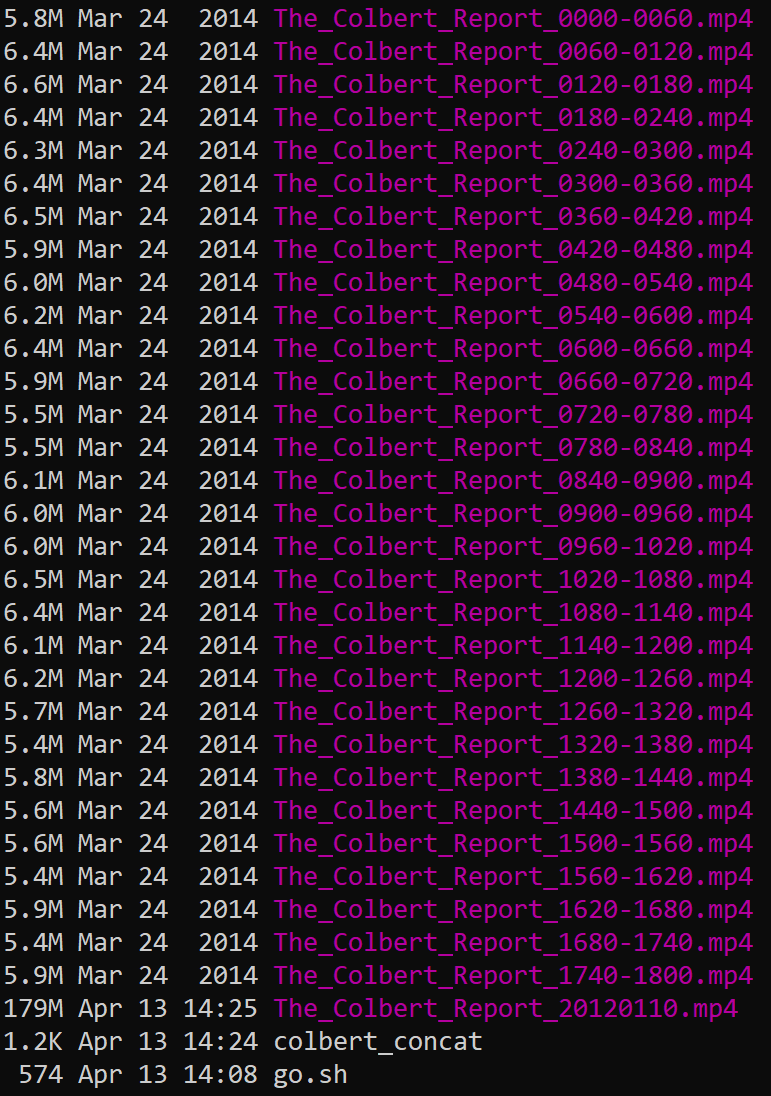 All the ~6mb files are the 1 minute mp4s.
colbert_concat is an intermediary file made by the script, needed by ffmpeg to combine.
go.sh is the actual script
The_Colbert_Report_20120110.mp4 is the final file, 179mb.

The final file seems fine. Most of the transitions at the minute marks are unnoticeable (3-4 of them had a bit of corrupted video).

Chewbacca & holiday special stuff starts at around the 17min mark 😃.

What do you choose when reporting them on ebay? 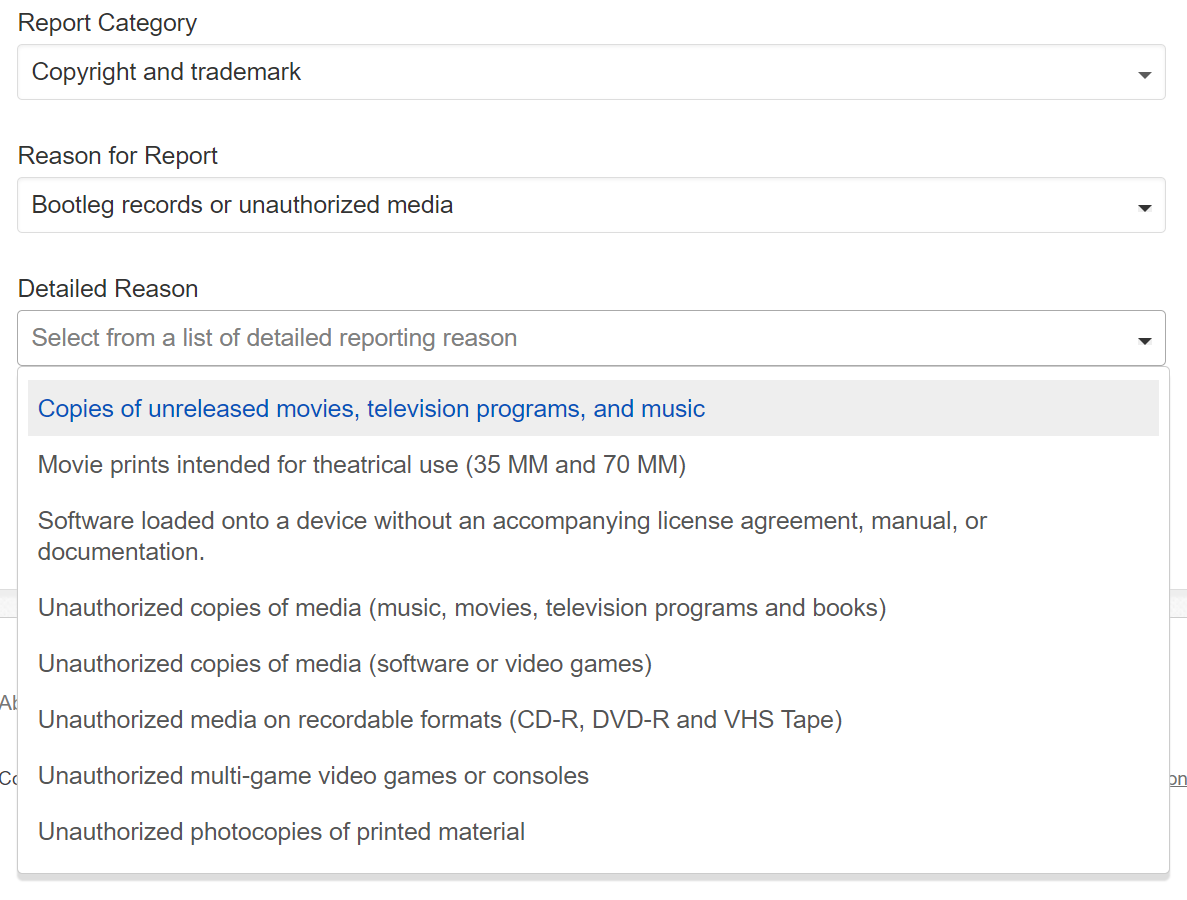 You shouldn’t need a invite/account to just view the main website. You do need it to get on the forum. See the first post of this thread for that.

Well, not quite: it’s still just a beta version for now.

If this is just a beta version, then how long till the actual restoration is complete?

I can’t tell if you guys are serious.

But my take on CatBus’ original statement is that he was stating something that’s pretty subjective (an opinion on the ranking of bear sub-species) and making an outright qualitative statement and saying it as if it were fact.

And he was saying it in a slightly mocking but mostly jovial way, trying to draw a parallel to your argument. CatBus may enjoy black bears. Maybe he likes the grace and power they display. But that doesn’t make them unequivocally the ‘best’.
Someone else might appreciate te regalness (regality?) of a polar bear. Or the grace of a brown bear. Or the ferocity of a grizzly bear. Or the comedy of a panda bear (which may or may not count as an actual bear).
But none of them can be right, absolutely, that the bear they like is truly the ‘best’.

Similarly, one might like the detail of d+77, or the grain of 4k77.
But there’s no definite/absolute ‘best’, so probably best not to argue about it.
Especially in this thread.

The follow-up comment by CatBus (and even the first one):
https://youtu.be/WaaANll8h18

Also CatBus was wrong about one thing. Panda’s are clearly the best bears.

Hi,
Would anyone have an invitation code for the SW trilogy forum ?

Is this still available to get from somewhere other than myspleen?

Can I please have this? I need it for my reconstruction of The Ewoks droids adventure hour.

Check your PM’s.
(Sorry @puttersnutter, guess I didn’t see your post ~3 years ago, saw it now when thread got bumped)

@SnooPac could you please PM me the links for the BD50 ML? Thank you so much

There’s an sfv file included with each release.
You can get a program like quicksfv (or whatever Mac equivalent) and run it against the sfv/rar files. It will tell you which files are missing/incomplete/corrupt. That way you can just try to redownload a few specific files that didn’t download properly, for whatever reason.

check your pm, should be sent.
thanks to kojodo21 for helping me recover some files first

Think everyone got it?