Disney revises and buries the original versions of their own films without reservation. It’s laughable to believe they would approach Star Wars any differently.

And this is why I’m boycotting Disney. It’s not merely because I hate the ST; it’s due to everything they do, their approach towards filmmaking and film preservation and copyright in general. All corporations are evil, but Disney’s a breed apart, and I won’t feed that godless abomination a single non-circulating Canadian penny.

Now the bastards own ALIEN. I’m terrified the original materials will be buried in their black archive for good.

THE TOMB OF THE CYBERMEN would be more worthy of your talents.

It’s kind of weird that the movie that establishes Vader as Luke’s father (albeit perhaps a clone thereof or something) also features an extreme uptick in him Force-choking officers to death.

I blame George Lucas & Larry Kasdan reacting to the mild-mannered Vader of Leigh Brackett’s draft, where he dismisses officers who fail him with mild reproofs like “Leave me, you incompetent idiot.”

Replacing the (bad) dialogue with something much more frightening (telekinetic strangulations) was the right move.

I wish the deleted scene from RETURN OF THE JEDI made the final cut, the one with Vader almost killing the cheeky little sh*t officer that prevents him from seeing the Emperor.

Qui-Gon Jinn wasn’t necessary. All that was needed was Obi-wan and Anakin. The prequels could have begun with them already Master and apprentice, building their bond right from the beginning of Ep. 1 - instead of pissing away the first chapter on a little boy and his mom.

Obi-Wan should have been older, and already a Jedi Master in Ep. 1, and Anakin, a teenager not a small boy.

Lucas traveled too far back into Anakin’s past for the prequels. We could have been spared all the childish crap that swamped Ep. 1.

Empire of Dreams is different. I don’t have a comprehensive list but the one example I know of for sure is that the Anthony Daniels is talking about George waddling during the filming of ROTJ and they walk up to Jabba’s palace they replaced the original shot with the 2011 shot with the expanded door.

JEDIT:
One other obvious change is when they talk about Williams recording the music for ANH they replaced the original shots with the SE shots. It seems whenever they show clips from the movie it’s all the 2011 master

That makes me think the unaltered originals will NEVER see an official release again.

This day just gets weirder and weirder for me. So mixed on it all. Loving The Mandalorian, appreciating the better colors of the movies in 4K HDR, but now there are brand new tweaks and losing hope of ever seeing an official unaltered release.

I can’t believe no one in control cares.

One day a film historian will write a book about one man’s madness and the trashing of a beloved trilogy of films. I predict it will be a bestseller.

I can’t believe this craziness has been allowed to continue. Thank Christ the nutter has nothing to do with my two favourites (JAWS & ALIEN).

As long as the fool is breathing, you can forget about the original versions.

Original theatrical cuts of the classic 1977-83 trilogy, fully restored in 4K, or NO SALE!

Something I just noticed (two decades later) about the prequels - no Gamorrean Guards. It would have been good to see some with Jabba, during the pod race.

Most - if not all - the new alien creature and monster designs are shite.

I read somewhere the TV Cut included a (deleted from the theatrical version) scene where Buddy Kupfer receives some kind of award / trophy from Conal Cochran?

Nice video! Never seen that footage before. A wider shot of the mechanical ‘arms’ lowering the helmet into position - and also what looks like a breathing apparatus?

The films work better as space fantasy rather than science fiction. All that advanced technology on display and people still have trouble shooting straight.

I saw this in 35mm as well as on two different digital projectors back in '99, including what might have been the first commercial digital projection of any film in the world.

Contrary to all the net rage, theaters were packed and people generally seemed pretty happy and were NOT all laughing, raging, etc. decent bit of clapping at the end at many showings.

And for AOTC, people were racing out of the earlier showings, smiling, giving thumbs up to people still on line, saying it was awesome, audiences erupted into cheers at the end. Again, contrary to all the hate you hear coming form the net crowd.

Probably still high from the movie they just saw. After a few days of reflection (and repeat viewings) the cracks start to appear, not long after, they’re ripping the film’s a new a-hole (deservedly so).

Anakin was a talented mechanic. Vader may tinker with his Tie Advanced in his spare time? Probably not though.

#33 is very interesting. Could Krennic be pulling a gun on Tarkin?

Yes - I happened to be watching that exact clip on YouTube recently, as I was trying to match various themes from the soundtrack CD to scenes in the film. One or two comments mentioned Fett turning his head just after Luke pulls out his gun, and I couldn’t believe I had never noticed that before.

The music playing during the procession (sounds a bit like a funeral dirge) is one of my favourite motifs in the whole trilogy. A slightly slower version of the theme recurs a few minutes later on the CD and was originally due to appear during the early stages of the Luke/Vader duel. I spent ages trying to find it in the film before reading online that this second rendition was pulled last minute, since the duel was more suspenseful with no music.

My favourite piece of music from the OT. A variation is used as Han is being loaded into SLAVE-1.

One of my most favourite scenes from the OT, and I’ve never noticed this interesting detail before.

Escorting the carbon frozen Han Solo, Boba Fett, imperceptibly turns his head in the direction of the sound of Luke’s weapon being removed from its holster - from an impressive distance.

DaVinci Resolve is excellent - and free! I’m using it for my fan edit. It’s not difficult to use, and if someone is having trouble, there are tutorials on YouTube.

I still haven’t seen these (beautiful) restorations/preservations yet.
I will not pay good money for a film burnt to a blank BD, as the discs don’t last as long as the official product.
I can wait - however long it takes - Mr. Lucas is an old man…

Almost everything from the OUT - except the crap at the Ewok village (hero’s on a barbecue spit, C-3P0 worship and story-telling scene, etc).

The love scenes from Ep II are thoroughly rotten and a god-awful chore to sit through.

Some decent action set-pieces (barely) keep this instalment from being a complete bust.

I know it’s an anonymous Redditer, but a 4K release is an eventuality, and a release leading into Christmas and IX makes sense.

One can dream it will contain the theatrical when it happens, whether this year or later. There really is no excuse from a technical/financial perspective not to release the original cut when SW hits the format.

That last part is worth repeating. IIRC, the 2011 blu-ray packages didn’t make as much money in their first day/week of release as the dvd did back in 2004.

A large reason for that, I think, is because the only perk of owning the blu-ray aside from being able to watch the prequels and yet another revision of the SE in HD was the deleted scenes that were gonna end up on youtube anyway. I think there were a lot of people who remembered 2004 and said “fool me once,” although many here bought it anyway hand over fist for the extras.

None of those selling points were enough for me then, and a 4k HDR SE certainly won’t be enough of a selling point for me without the unaltered versions. I suspect I’m not alone in that regard.

OUT included or no sale.

I still have my 2006 unaltered DVD releases and will continue to enjoy them.

I will not buy this SE sh*t a FOURTH (VHS, DVD and Blu-ray) time.

Studios could get weird where title sequences on widescreen movies are concerned when they reached home video. Squeeze the original so no text gets cut off, but make the actors look thin, or use a textless version intended for making foreign release prints with no thought to matching the style of the theatrical titles. I know on my old pan and scan Raiders Of The Lost Ark LD you can tell it’s video generated text over the opening footage, which doesn’t look like the original theatrical lettering.

In the rare instances a title sequence was letterboxed in early home video or on tv, artwork would be used to conceal the black bars.

Maurice Binder got so fed up with seeing his intricate James Bond title sequences get mangled on tv, that he would create separate 4:3 versions in the Roger Moore era.

Raiders looks like it has the same font though it does lack the black outline on top of the white lettering and obviously sized differently to accommodate the 4:3 image. 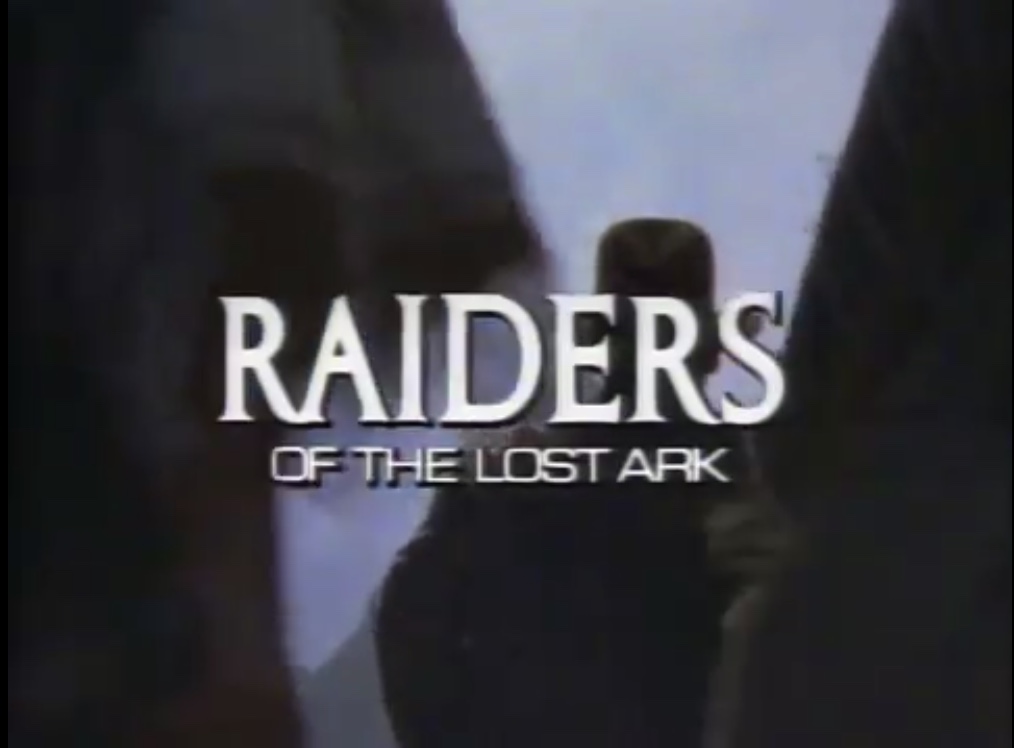 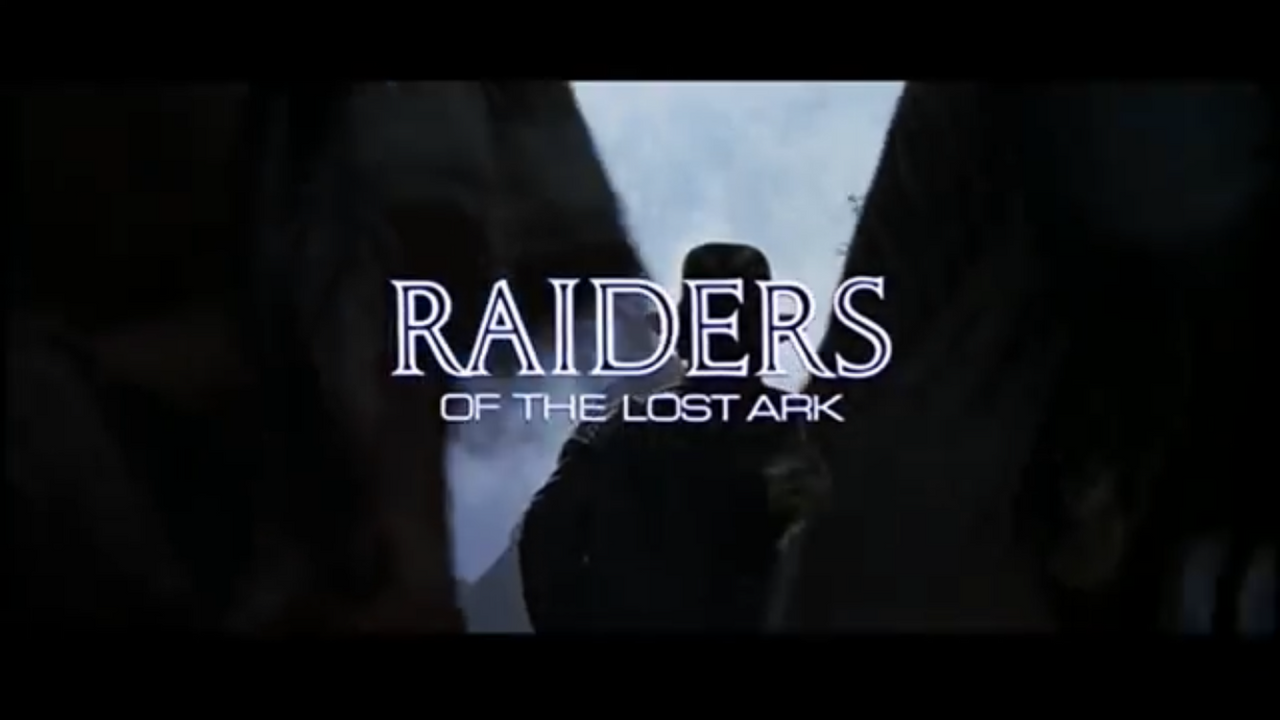 The 1999 Fullscreen VHS and 2003 Fullscreen DVD have the opening and closing credits in widescreen so the original logos are retained.

This reminds me of something strange with Jaws. The 1980s VHS as well as the Discovision release has the credits in the same size and font as the widescreen version albeit they appear somewhat small in the 4:3 image while the 2000 Fullscreen VHS and DVD and 2005 Fullscreen DVD have the credits a bit larger but squeezed in to accommodate the 4:3 (like Raiders above).

If the Brazil CIC videotape is good enough quality (and providing it doesn’t have edits to it), why not replace the Portuguese with English audio? You will still have the problem of translating a small portion of deleted material (extended Police Station/camera recovery). The positive is you won’t have to worry about miss-matching video quality, colour correcting or different aspect ratios for the additional footage.

Are you going to include the extended Police Station footage? The scene starts earlier than the TBS television edit. There’s dialogue there that also needs translation.