Thanks again for the help.


I also just updated clip 8 with additional footage and uploaded clip 9.
lol, well, I guess I fixed it after exporting that file.

It's fixed here on my hard drive.

I'll put up corrected files in the next day or two.
Pretty sure the line was "receiving" on the subs. I remember checking that one.

As for argument, fixing that now.
My spellcheck seems to have accepted it with the wrong spelling for some reason.

But anyway, I'd prefer that people nitpick the hell out of these clips.
I'm posting them as a kind of proof reading process.
100 shots is only probably a handful of scenes per film.
I think what he witnessed was them beginning to remaster the deleted scenes for a future OT dvd release, ala the prequel discs.
It doesn't necessarily have to be scenes going back into the film.
I just uploaded Clip #4 of the AUV of Balance of the Force to the Myspace blog.
This one is notable because it showcases a few changes from the original version (beyond different subtitles).
Blink and you might miss them.

Another clip may go up in a few hours.

EDIT: Clip #5 is up as well.
The blog is linked on the myspace page, along with a FAQ and a few other things.

http://www.myspace.com/magnoliafan78
I'm calling this the "Almost Unaltered Version" because its pretty close to the original with a few minor alterations.

And, Episode II, has undergone some tweaking as well. Not a whole lot of major story changes, just a lot more tightening, and then I have 2 versions, a standard cut and an extended that doesn't quite flow as tightly but contains a wealth of additional scenes.
In a few weeks time, yeah, anyone who wants to help get the disc out there will be much appreciated.

Right now, I'm looking for suggestions on what features to add to the disc and stuff like that.
I have a blog on the MS page that asks for any requests and/or input.
I completed re-assembling the "Almost Unaltered Version" of "Balance of the Force" today.
I'm just encoding the files and putting together the subtitle track for it. I'll probably spend the next week or two combing it for any gaffs or errors.

I threw up a myspace page, with a few clips from the new version, and a blog where people can submit suggestions for special features to go on this dvd release.
http://www.myspace.com/magnoliafan78
Everything is still rough on the myspage page, as I just threw it up this morning, but I'll refine it in the coming days.

Oh and the minute I get this dvd set locked and completed, I'll be litting Rik' (among others) get the dvds out to you guys...
The big thing that took so long was that I had to reconstruct it from scratch.
The original files were lost.
Promotional copies, my friend.
The list of versions I actually paid money for is much smaller.

As far as my personal favorite of everything, it would be the Executor VHS Set, just for how comprehensive it was.

I have Portuguese, Thai, German, French, Western Spanish, European Spanish, and Italian, thus far.
Well, first I'm putting together a pretty close recreation of the original Balance of the Force, with just a few technical tweaks and minor creative changes, so I'm re-doing the voices in a similar manner to the way they were done before.

For the version that will incorporate the digital Yoda and any other potential changes in the '07 dvd set, along with a lot of new tinkering, I will probably have the original audio and then a new alien dialogue track. I've hunted down TPM in quite a few obscure languages trying to find something I like and just tonight I think I may have found the track I will be using. I'll try to put a sample vid of the new voices to see if anyone has gripes with those, either later tonight or tomorrow.

Edit: False Alarm... I recognise too many words in that language, too.
A little preview for those who have never seen it before....

http://s104.photobucket.com/albums/m190/magnoliafan78/?action=view&current=Youtube2.flv
Here's my list of everything I've bought, recieved a promo copy of, or recieved as a gift. It's kind of vulgar, once I see it typed out.
I've never really sold any of them off, so pretty much everything is boxed up in storage somewhere, except for the Executor Box, LDs, and DVDs.

I know what you mean about a lot of re-edits out there, not just of Star Wars, but films in general.
There are some that take a hatchet and lop out a third of the movie. Occasionally it might work, but a lot of times you end up with something that feels like an edited for television version of the original film.

I know Rick has seen Balance and enjoyed it for what it was.
It was implied to me that George had seen it as well, but I'm not certain about it.
Yeah, that was transcribed straight from the screenplay. It's an interesting read. There's a lot of neat stuff in the illustrated screenplay. Storyboards, script form of a few of the deleted scenes that ended up on the dvd, and some extra snippets of dialogue and action.

Most people don't realize it, but I did a lot of slavish research on discarded ideas when I made "Balance of the Force".
I tried to use as much of George's original ideas as possible to make it sort of an alternate "what if?" version.
The racial tension between the Gungans and the Naboo, the line about Jar Jar stinking up the ship, the line about Jar Jar's sentence of being "pounded to death", the slave labor being the core of the story instead of taxation, even the dubbing of the aliens were all scrapped concepts from earlier screenplay drafts.
I also got the idea of naming the globe at the end of TPM the "Kyber Crystal", and making it a stolen Gungan treasure, as a throwback to the early drafts of the OT, which had a crystal by the same name.
Sometimes I think a lot of people think I pulled a lot of that stuff out of my ass with an attitude of "my ideas are better than George's", when it was really a case of "here are some of George's discarded ideas that I really liked".

Originally posted by: Go-Mer-Tonic
I really don't think that scene was ever written let alone filmed.

Buy the illustrated screenplay and read it for yourself.
Looks like the 30th Anniversary DVD set has been somewhat confirmed. 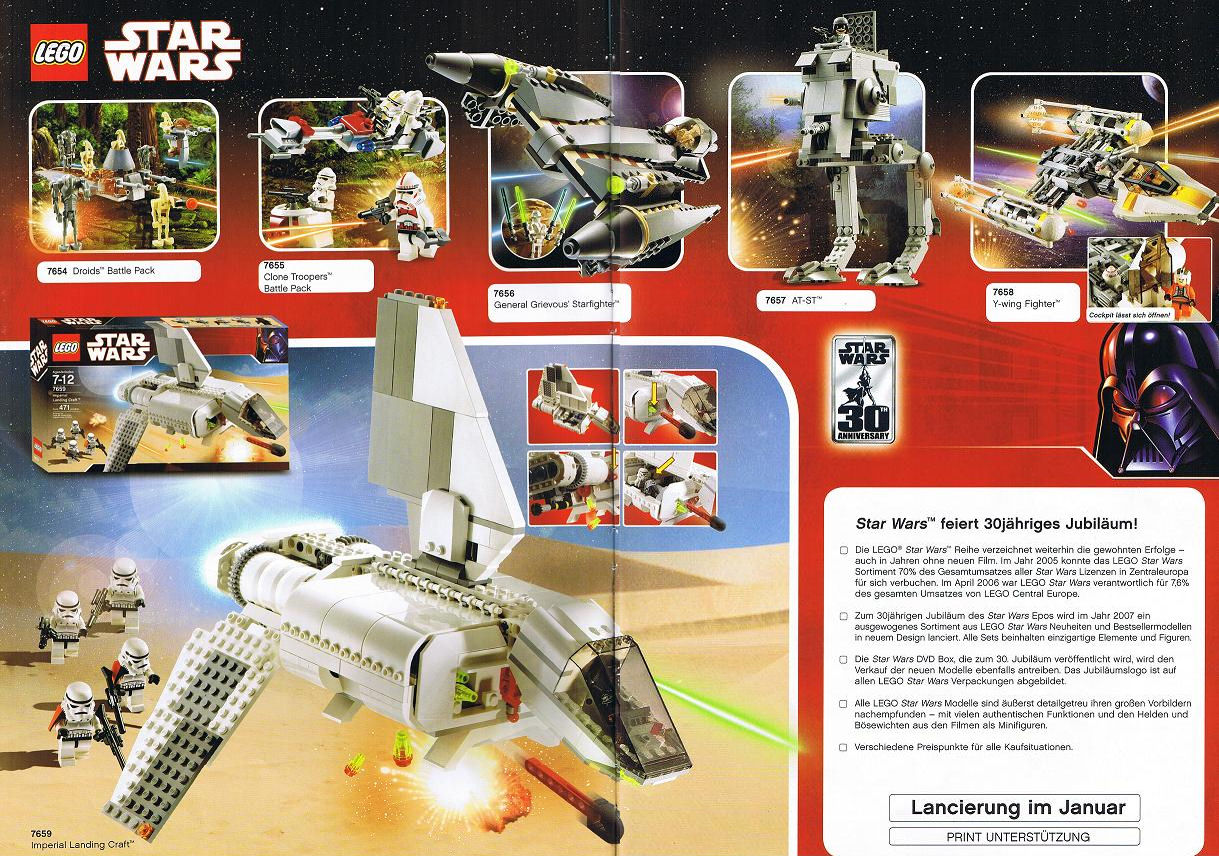 TF.n has a translation of the image text here.
Qui-Gon did originally disappear, but the scene was cut down in editing.

QUI-GON's body goes up in flames as the JEDI COUNCIL, the
QUEEN, SIO BIBBLE, Capt. Panaka, the HANDMAIDENS, and ABOUT
ONE HUNDRED NABOO TROOPES, TWENTY OTHER JEDI, PALPATINE, OBI-
WAN (standing with ANAKIN), JAR JAR, BOSS NASS, and TWENTY
OTHER GUNGAN WARRIORS watch. There is a drum roll that stops.
Doves are released, and the body is gone. ANAKIN looks to
OBI-WAN.

OBI-WAN
He is one with the Force, Anakin...You
must let go.

ANAKIN
What will happen to me now?

OBI-WAN
I am your Master now. You will become
a Jedi, I promise.
Originally posted by: canofhumdingers
it's a reference to MST3K the movie. I've had someone argue with me that it's actulaly supposed to be can of HAMdingers, which very well may be the actual line in the movie. But HUMdinger is an actual word, so i still think i'm probably correct. Haven't seen the movie in years, so i can't really say for sure.

Hamdingers are rumored to be a local culinary treat in the Wisconsin area. They have been described as a sort of SPAM sandwich. Hamdingers are notable for their appearance in the television series Mystery Science Theater 3000, where the cast occasionally referred to Hamdingers with both nostalgia and revulsion -- a box supposedly full of them housed an escape pod in one episode; the storyline stated that it hadn't been found before because nobody wanted to open the box. While several recipes for Hamdingers are available online, as of this writing no Hamdinger has ever been spotted "in the wild."


My one problem with it is that Qui-Gon moves too much in comparison to the other 3 ghosts.
It was something that I noticed the first time I saw it. Then of course there is the whole Hayden issue...

I've been playing around with a similar shot, myself for ages, recentering it, so the 4 Jedi are in the center of the frame, rather than having Qui-Gon off to the left. I was considering doing multiple angles on Jedi, so that you could see the original ghosts or one that adds Qui-Gon into the fray in the last shot.
I've also tossed around the idea of having a young Yoda, Obi-Wan, and Anakin in the final shot with Qui-Gon as a third option, but that kinda seems like more of a pain than it is worth.
I do get pretty busy, so I don't always have time to check email or hop on the IM.
Don't take it personal.
Yeah, I've been going through reconstructing it shot for shot over a few years, since my dumb ass never saved all the files last time. I've made a few tweaks here and there, adding a shot here, trimming a shot there, etc.
I always wanted to have the shot of Watto from the theatrical podrace where he cheers "Sebulba!" and completely forgot about it when I cut the sequence the first time, so I put that back in. The few changes in the cut sitting on my hard drive now are minute ones like that. Some of the dialogue has been tweaked to sound a bit less formal. Altering "cannots" to "can'ts" and few things like that, just to make things sound a little more natural. There are also a few of the SE shots already dropped in. The submarine actually explodes when it hits the bottom of the waterfall. The Republic cruiser at the end is a blueish color instead of pink.
I also re-worked the reversed dialogue so that there isn't any (or at least very little, a sylable here and there) Spanish left that isn't reversed.
There are rough shots of Grievous and things like that, but those are still on the "to do" list and probably wouldn't go into a version until after the boxed set comes out next year, to take advantage of additional deleted scenes and things like the cgi Yoda.


Random thing that someone has probably thought of and mentioned by now, but I didn't see it listed.
Artoo's eye. It doesn't quite blink the same way it does in Empire and Jedi.
If you're taking the time for Vader's chestplate, I'd suggest touching up Artoo's eye as well.
I think it has to do with white scenery and non-animorphic laserdisc transfers. The space stuff and Dagobah have looked good so far.

The original Hunt for Red October dvd looked like a fat bag of ass whenever the ship was at the surface, too. Anything with large amounts of sky was just a mess of snowy pixels. The SE re-release of that disc was leaps and bounds better.