So, rearranging 525 pictures manually in an imgur post isn’t exactly my idea of fun. So unless there’s an easy way to share an imgur gallery that I don’t know about, I’m going to have to do it another way. Any suggestions? I’d prefer an option were the images can be arranged by name, otherwise the whole thing will be a complete mess to scroll through.

why would you upload pics from a making of that can everybody watch?
isn´t it better upload stuff that isn´t watchable,only exists as pics?
only a suggestion…

Speaking of misconceptions from this scene, before I saw ROTJ in HD I always though that this pillow was a part of Jabba’s body. When you see it in VHS quality it looks like some kind of weird flesh-bulge and it always grossed me out as a kid, especially since it looked like Salacious Crumb was partially inside it like some kind of marsupial pouch.

Oh my god, I thought the exact same thing as a kid!

Just to make it clear, most of these are just regular production photos from the scenes as they were filming and others were just set up even though they don’t have anything to do with the film. Only some of them are from actual deleted scenes. They took thousands of production photos for reference.

There would be no reason

I think the compositing is vague enough here to support any interpretation as to where the lasers are coming from.

All three laser blasts come from the exact spot even though the Falcon is moving, and it’s not from the top or the bottom turret.

It’s kind of debatable though. Even as it swings around right after the “they’re going after the medical frigate” line it’s not clear which guns are firing.

Those clearly do not come from the turrets. Funnily the Falcon fires only 3 times but the sound effect comes 6 times.

I’ve always thought that it had front lasers, for a guy like Han Solo it would feel really stupid if he only had the turrets. He even has hidden cannons to shoot people. 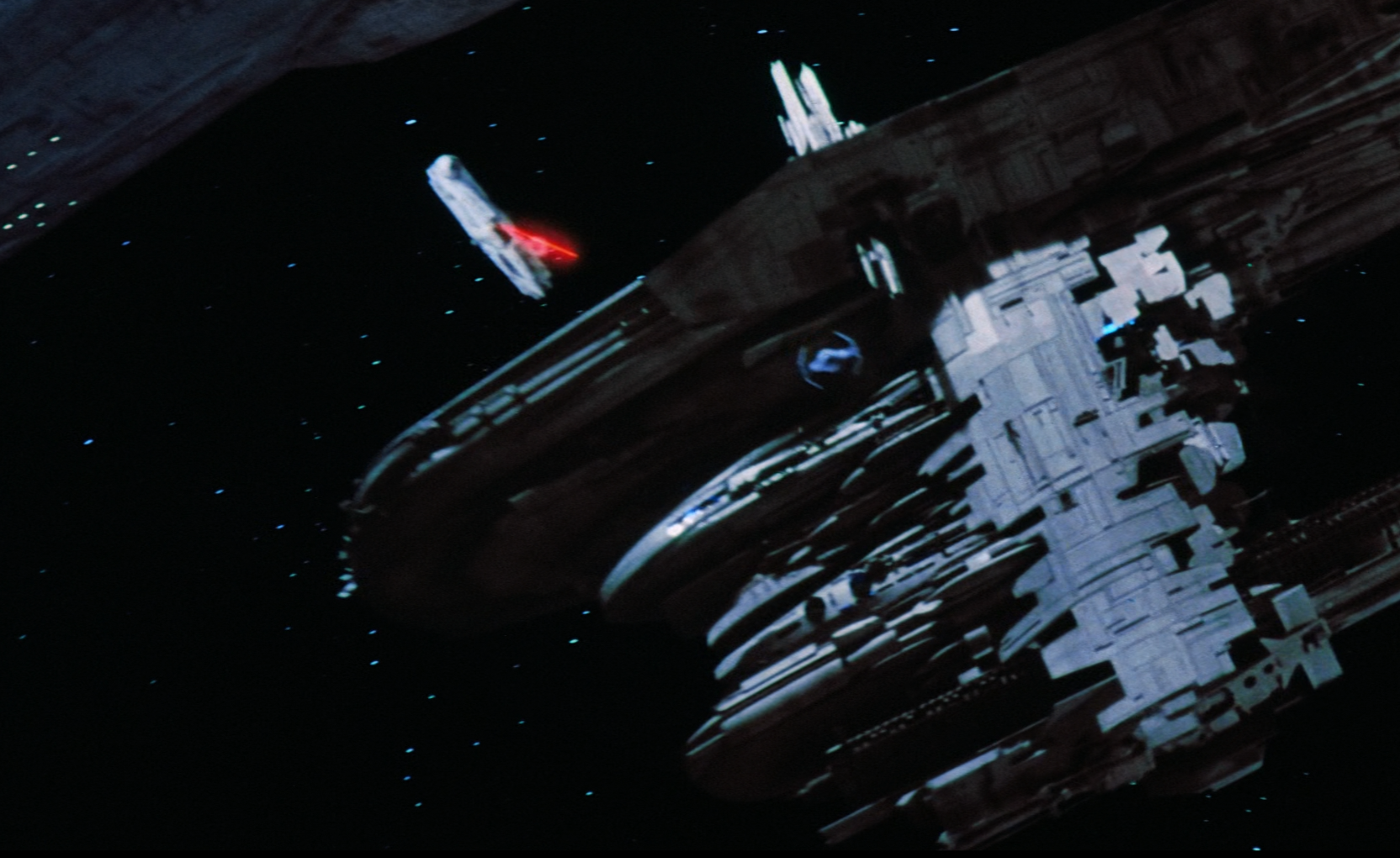 In SW Han was going to shoot the lone TIE Fighter from the cockpit before entering Death Star. In Holiday Special he says that he lost control of one of the remote cannons. In ROTJ Falcon used front lasers.

Does anyone know where to find an English-language copy of the international theatrical trailer used to promote Caravan of Courage: The Ewok Adventure? It’s online in Spanish and German versions, but the original English version seems pretty tough to find.

The runtime on the BBFC submission for the trailer looks closer to the more common US video trailer (https://www.bbfc.co.uk/releases/caravan-courage-ewok-adventure-1970); anyone seen it on a CBS/Fox tape released in the UK?

Are those the actual theatrical trailers or were they just dubbed for rental VHS ads? It could very well be the latter, but still cool.

Ed Slushie said:
What made you think that?

In an early draft of ANH, the emperor’s name was ‘Cos Dashit’
because he causes the shit to happen.
No, I’m NOT joking, look it up.

I’m pretty sure it was also used in the 90s’ merchandise.

I think Indiana Jones movies are overrated. They’re fine and fun to watch once in awhile but I wouldn’t spend any money to own them.

I don’t remember there being a good comedy film in this millennium and that could actually compete with something from the 80s or 90s.

I don’t like any Marvel movie, MCU, Spider-man or whatever.

The first The Fast and the Furious movie is the best of that series.

Is there any place with a scan of a theatrical print or more images of it?

Regarding rebel commanders (and personnel) being changed from film the film, I think that was the only right way to go in terms of story/universe. First, it provides a sense of scale of the rebellion, i.e., they have many bases around the galaxy, and counterbalances the rest of the universe shrinking elements. Second, it provides a sense of how dangerous being a rebel actually is, i.e., even the top commanders might get killed regularly.

I do agree completely. But only one or two would have been enough, and I wouldn’t even have them speak. Just something you could see when watching the film 2000th time in 4K.

A lot of rebels don’t survive past one reel of each movie though. Even being Luke’s snowspeeder gunner is not a safe gig.
Who’s the one radio guy?

Pilots yes, but the command crew etc. like the before mentioned Dodonna and Rieekan could have been seen in the ROTJ briefing at least or something.

The one who says “enemy fighters coming to your way” in SW was on Hoth listening to the probe droid.

It’s interesting to think about that Wedge, 2-1B and that one radio guy are the only ones except for the main characters to appear in more than one film from the Alliance. The Empire I get since it’s so big, but for the rebels it would have been fun to see more same pilots and command crew even in the background. But I don’t mean too many, 1-3 more would have been enough, because it also helps world building to see new faces and lose others.

I think he meant, why did they add Yavin 4 to the background of the shot?

Well, that was the whole joke.

Another reason why some of the changes made for the 1997 Special Editions make no sense; especially for Star Wars…

The Death Star has a clear line of fire for the Rebel Base on Yavin IV (which was added into the scene for the 1997 SE) - even before the Rebels begin their attack:-

More information on this can be found here:-

I’d love to hear an explanation from Lucas or Lucasfilm for that change!

Every retail release I own apart from SW is the only one. Well, apart from all 4K releases which include BDs as well but I wouldn’t say any multi-release counts here. But I do have recorded VHSs from some of the same movies like the first 20 Bonds. Usually they differ somehow, like they are in P&S or open matte or at least an older scan of the film so why not still have them.

It’s not lazy, it’s intentional. LFL or Disney for that matter does not knowledge that there are any other versions of their movies (anymore) but what they actually release.

I mean she’s okay, but forcing her to every show is just unnecessary. Let the past die and so on… I guess the “Boba Fett” in one episode was probably Sabine then. Probably some clones still alive too.

You obiviously can’t, but the thread creator can

Yeah, ZkinandBonez. Get on it. Did you not realize that creating a new thread is akin to taking on an extra part-time job?
Geeze, man.
/S

Are you saying that the thread creator can’t edit his first post or are you just being an asshole? I was responding to the question and it is the truth. What is your problem again?

Can we please not start an argument here. I get what you’re saying LexX, but this is how I’ve decided to run these threads and most people seem fine with it, so take it or leave it. I’ve added an in-progress index to the first post so that you can navigate through all the various posts easier than just scrolling through every page (once we get to multiple pages that is).

Now I’d appreciate if we could all get back on track in order to stop cluttering the thread with this discussion and focus on sharing and discussing trailers and promos instead.

Again, I was responding to a question to a guy who quoted my post. I already got your response for the first time. I guess I’ll leave it then.

You obiviously can’t, but the thread creator can

Yeah, ZkinandBonez. Get on it. Did you not realize that creating a new thread is akin to taking on an extra part-time job?
Geeze, man.
/S

Are you saying that the thread creator can’t edit his first post or are you just being an asshole? I was responding to the question and it is the truth. What is your problem again?

You obiviously can’t, but the thread creator can as the first post is edited anyways to include all the posted trailers. That was just my opinion on usability from doing several video searches and chronological lists for a few years.

Not sure if this has been reported on here yet, but…