We’re with you Adywan! Here’s to endeavor being a rewarding one!

My thoughts on the ANH:R planet that the Death Star is orbiting. I’ve talked about this point in several other places so I apologize in advanced if this has been said before.

“Remember that lush blue and green tropical planet from Rogue One? This is what it looks like now after the Death Star used it’s lowest setting on it.”

Wow. Talk about tine tuning the Battle of Hoth.

I still remember back when Adywan said he was going to do away with the AT-STs and have the sequence only showcase the AT-ATs. We were all like “NO! You can’t remove the AT-STs! This is their debut!”. Then he released the next preview for this edit and what do we get? AT-STs everywhere! And really good looking AT-STs! They fitted perfectly with the shots we were looking at! But how could they be incorporated into the Battle of Hoth in a meaningful way? Well when I started watching the edit, I had two OMG moments that I thought were brilliant.

That was just awesome.

After all these years, the next installment is drawing ever so closer.

I’m sorry Adywan that the Wampa didn’t turn out the way you wanted it too, but don’t worry. We’re still here and anxiously awaiting!

Good luck with the final touches!

Is this clip going to reflect any changes in the Revisited Edition?

Just a very little thing I never saw though. It's also on the original footage. It's at 1:35: Don't we see something that looks like a laser hit appearing on the back of the AT-AT, but without any actual laser beam hitting that point?

Yeah, it definitely looks like Luke was supposed to hit those points. This kind of effect is also clearly evident at 1:45. Note the main body area just above the AT-AT's front legs and you'll see two blaster hit the armor and leave two marks.

I guess the Snowspeeder's blasters would have to angle themselves in order to hit those marks which wouldn't be all that realistic given how mounted they look.

Kotaku.com posted an article regarding Adywan's work on the films.

Just be warned about the comments section. They kind of miss the point.

Glad to see the transport escape was toned down slightly. Not including the Star Destroyer laser blast sounds makes a huge difference. I still mourn for the X-Wing pilot who had to die even though he/she didn't originally. I guess this is the butterfly that will greatly affect the Star Wars timeline when we reach Return of the Jeid.

As for Darth Vader's the new display graphics? Hmm.... Yes! I like it!

Maybe he just hung around to 'play' with the chicks!!  I would...Even Bounty Hunters need time off!!!

That's a pretty long time to hand around, especially since this film is supposed to take place years after ESB. And why Tatooine of all places, especially with a gang lord?

Removing boba from jedi would not be a good move IMO. He has been part of Jedi since 83, And for the little time we saw him in jedi ( for better or for worse ), it would be a shame to take him out completely.

Ady could always change the events that caused boba's death. Anybody with an accurate constume and a HD camera can film some new footage for ady to insert in his edit.

Well, consider the character in question. Why would Boba Fett, one of the most ruthless and efficient Bounty Hunters in the galaxy, be at Jabba's Palace doing nothing? He comes off more like a Body Guard to Jabba than a Bounty Hunter for hire. His very presence was all about keeping a cool character in the story no matter how illogical it was. There's no reason for him to be there, and there certainly isn't any reason for him to be on the sail barge during the sarlacc battle.

The only way I can see Boba Fett working in ROTJ is if the following conditions are met.

1. He just delivered a bounty for Jabba JUST before Luke made his entrance and was going to enjoy Jabba's hospitalities for one day.

2. He gets invited to the sarlacc execution, but doesn't take part in the battle when Luke and company break out. Jabba than makes Bobba a HUGE offer if he captures/kills Luke, Han and Chewie, which Boba finally agrees and takes part in the battle.

Coincidental? Maybe, but at least it's not out of character.

Fingers crossed that this project will proceed without a hitch. Good luck Ady!

I don't know. I'd hate to redub and reclassify the only female pilot shown during a space battle being blown up two whole seconds later. Is there anyway we can save her??

I don't think the jump prequelfies the movie at all to be perfectly honest. Not only were the scenes involving hyperspace in the prequels pretty quick, they didn't even feature the in-cockpit and zooming away shots that only the original trilogy had.

If I had to put my money down, I'd include it. It's not really that hard to figure out where Han could be going since Boba can tell he's not making a jump to light speed. Not to mention that Boba probably did some research when he took the job and figured out where Han got the Falcon in the first place. After all, he is the best bounty hunter in the galaxy! I also like how it serves as a fresh reminder on how important a functional hyperdrive really is, that even though the Falcon can get to Bespin in good time without one, getting there via hyperspace would have made a grave difference. Even though Adywan said he won't be including it into the cut, the other edits like Slave 1 following the Falcon are much better in my opinion.

Also Ady, thanks for including the rotating star field. That made my day. :)

Here's something that popped into my head while watching the film again. What do you think about having the propulsion lights on the Millennium Falcon off while it's being pulled into the Death Star's hanger? I just can't get that one line that Han said out of my head.

It would make sense from everyone involved in it's capture, especially from the view point of the technicians and troopers looking at the ship entering the hanger with it's propulsion lights off. It'd be quite silly if someone looking at the ship entering the hanger noticed that it's engines were on during the capture and yet shut down the moment it stops when later they conclude that the ship was abandoned earlier.

Padme: I'm not afraid of dying. I've been dying ever since-

NO. I can watch Boba Fett's stupid in-cockpit shots during the planet ring chase, but this scene takes the cake. It's longer, more cringe inducing, and it's being delivered by Natalie Portman who I firmly believe is a talented performer. Without a doubt, the worst romantic dialogue I have ever endured. I still feel embarrassed sitting next to people when that scene plays out because they might think I'm a prequel apologist who actually likes it. I don't!

Ok, the EU did give us the awesome Missile Boat.

@canofhumdingers: Yeah, you were the first person to spot that glitch after 7 years it's been out there, that's quite cool :-)

Oh and thank you Danny Boy for posting that picture, the glitch is much more visible there. Here's a screenshot from the HD version of that video: 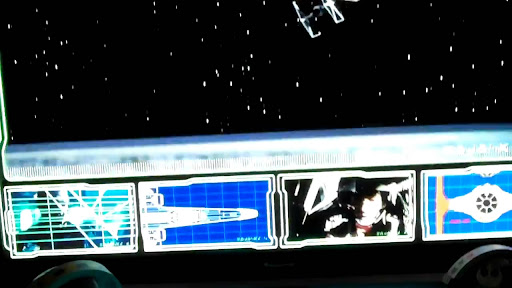 I don't understand. What am I looking at in this screenshot? Is it the bad looking interface? What was the deal regarding the "Space boobs!" comment? I don't see any boobs.

I find the re-edited sound coming from Princess Leia to be a bit on the distracting. I just couldn't keep my attention on what Luke or C-3PO were saying when I hear Princess Leia's line come in over theirs. It also makes her message come off a bit more redundant if we here it over and over again when compared to the original cut.

I totally understand that Adywan's edit makes the audio more practical, but it still comes off as intrusive and distracting when it's played over other dialogue.

Has Luke's first encounter with Leia's message been mentioned yet?

Adywan. My sincerest condolences on your father's passing. We're with you.

I wonder if Ady will credit them with his own EU names...

Hopefully it will be more productive than what Lucas named that spokesbot in the new Star Tours.

Producer: I don't know what to name this bot! We must consult to George Lucas, the ultimate name maker! Lucas! What do we name her?

Lucas: Who's playing the part?

Not everyone is averse to the EU. Ming and his crew especially.

Relax doubleofive. I'm not trying to call anyone out on their ignorance on the EU. I just got a sudden nostalgic brain wave back in from the good old N64 days of me playing Star Wars: Rogue Squadron. That game featured a female Tie-Interceptor pilot who defected to the Alliance and even joined the ranks of Luke's very own Rogue Squadron. The same Squadron that was in The Empire Strikes Back. Now I understand that this was just sheer coincidence, but if anyone ever asked me who that pilot was, Kasan Moor fits would be it.

I also like how we finally get a female rebel pilot into the mix since the original Star Wars movies never showed any female soldiers or pilots on either side. The female presence in the Alliance was limited to just technicians or behind the scenes leaders. I can't wait to spot her.

Ok, at 0:20 in the new clip just as the transports are taking off, you can see the Ion Canon extending out of it's orb base like it did earlier. Shouldn't it be abandoned after the evacuation code was given?