Does anyone have all of these in HD?

You guys probably already saw this making off (and the completed scene of course):

I wonder if something like this could be done to ANH:R. For years I thought that new scenes could be added by filming with actors against a green screen, after all, anyone can play Vader and Obi-wan has his head covered, what makes it possible to have someone to play his role too. Not as it was done by FX if Ady doesn’t think it fits, but as something new that could be used to improve the original scene.

What do you guys think?

Do you have a color corrected version of the original film? I’d love to just have a version with your color correction.

Adywan, Projects 4K77 and 4K83 are definitely 4K. They have less detail than the 1080p BluRays, but they’re absolutely 4K.

Adywan clearly meant that the visible detail level is less that what is already in the 1080p blu-ray, which makes sense as one is from negatives and the other from old release prints.

Sure he did, but he said “even the team would admit these aren’t 4K” and… well, they most definitely are.

No they are not. Just because they are scanned and released in 4k doesn’t make them 4k. Theatrical prints hold between 720p and at max 1080p worth of visual information. The team behind the 4k releases captured the film at 4k to try and squeeze the last bit of detail they could out of the prints. They did a damn good job, but they can’t magically produce detail that is on the negatives that isn;t present on an old theatrical print. The only way they could be 4k is if they were directly scanned from the negatives in 4k or above.

It’s a bugbear of mine with all these 4k commercial releases that are just upscales. It may be in 4k resolution but if the source doesn’t have the resolution to begin with, it’s not 4K. It’s so misleading and causing people to claim that 4k is a waste of time because most of what they are seeing were never even mastered @4k. The BBC here have been releasing old Doctor Who episodes on Blu-Ray from old TV broadcasts. 1080p, yet the source was 480p. And they’re calling them HD. They’re even going to release ones in UHD. It’s madness

Awesome news! Really looking forward to it. Just wish I had plex /:

Call me ignorant or whatever,

but I don’t see the benefit of 4K for these movies. They are old movies that, whether we all like it or not, will always look like old movies.

This is besides the point of a 4K fan edit, but you do realize that film resolves to a resolution of 4K if not more and that there is a fan preservation of the movies in 4K right over here gestures vaguely to the internet that looks like magic with automated tools cleaning them up. Or the fact that dozens of movies as old as or older than Star Wars get UHD releases every week and look incredible.

We can’t keep running around spreading this misinformation that Star Wars is somehow too old to be preserved properly. We can’t believe that, especially when LFL has already done it themselves internally.

Film resolves to 4K or higher because it is meant to be projected on 30-90 foot movie screens not on your 60” tv. I never said that these movies shouldn’t be preserved in 4K. I think it’s great what the 4k77, 4k80 and 4k83 projects have done/are doing. I was simply making a case for the topic at hand and my own personal viewpoint on the matter. Just because old movies get UHD releases, is a non-argument. Resolution of a picture and fidelity are relative to the viewer. Some people notice the difference and can’t get enough of it, while others aren’t overly concerned about the minutia of picture quality. It’s like wine tasting, as long as you are happy with your choice, that’s all that matters.

Call me ignorant or whatever, but I don’t see the benefit of 4K for these movies. They are old movies that, whether we all like it or not, will always look like old movies. They were filmed on old medium, and meant to be viewed on a theater screen shot from a projector. Not on a tv screen from a 4K UHD Blu-ray player. No matter how many pixels you cram into it, it will always look like grainy film from the 70’s, so what’s the point. If 720 doesn’t look any better than 1080 (by what Ady says), why would 4K look any better?

If you are seriously worried that it doesnt look great blown up at 4,000+ pixels, then I think you are missing the point of the Star Wars films. I understand you want them to look their best, but I personally think what Ady is doing is making them the best they can ever be and if you really want 4K, I’m sure there will be plenty of people who will upscale it.

But that’s just my own personal feeling on it.

Well, i don’t know about you guys, but I’m down to watch a train wreck any day

Hey Ady! Ready to ask you the Million $ question… How am I able to watch ANH:R and ESB:R?

I know it’s rude to say this, but I feel like no one should answer this question.

If a 5.1 version becomes available I would like to have it as well

But I’ll take whatever you got until then

Looks like the link Angel posted is dead. I believe it is just a matter of rotating the tower in the battlefront model. I may have the ISD model somewhere, if I find it I will shoot you a pm

I also agree with the comments on timing. Also you might be able to fake the engines look in after effects. But I think they look fine as is. I mean, technically the Tantive is already flying by and the engines are at full force, where as the clip that was posted above what the ship getting started. The fire wouldn’t necessarily be visible as it’s whizzing by. Just my 2 cents

Also I have a node setup for blender that will fake the engine glow in post. If you want I can send you the .blend file and you can play around with it.

Use the SC 38 footage by Fixitinpost to replace the original lightsaber fight in ANH.

I messaged you on r/fanedits but could I get a copy of this?

I think I hated it?

Pretty much my thoughts on it.

There are parts of it that just look bad, like all of the force powers, those would need to be fixed. Also my wife says it’s too fast, and in some places it is. It’s like so close to working

I agree, I think in theory it’s a great idea, but the execution needs some work. Kudos to these guys doing it, but it just feels not professional in places. I think it’s too fan boy looking. If it was a little more conservative it think it would be perfect and would integrate a bit better with the surrounding footage.

FXitinPost has just released his SC.38 “fanfilm”/remake of the Vader/Obiwan duel from A New Hope and it’s pretty awesome. Some shots look a little funny, but with a little editing, I think it would be a great addition to this “remaster” of yours. Check it out:
https://www.youtube.com/watch?v=to2SMng4u1k&feature=youtu.beNew+Teaser+T

(just a shame Vader has the wrong gloves on. So much work done and such a simple detail overlooked… sucks, but it’s still pretty awesome to see the new shots and choreography)

Opening Test Shot #2. I decided to entirely replace this shot with CGI. Original models taken from the Blu-ray just didn’t match rest of the VFX in terms of image quality. 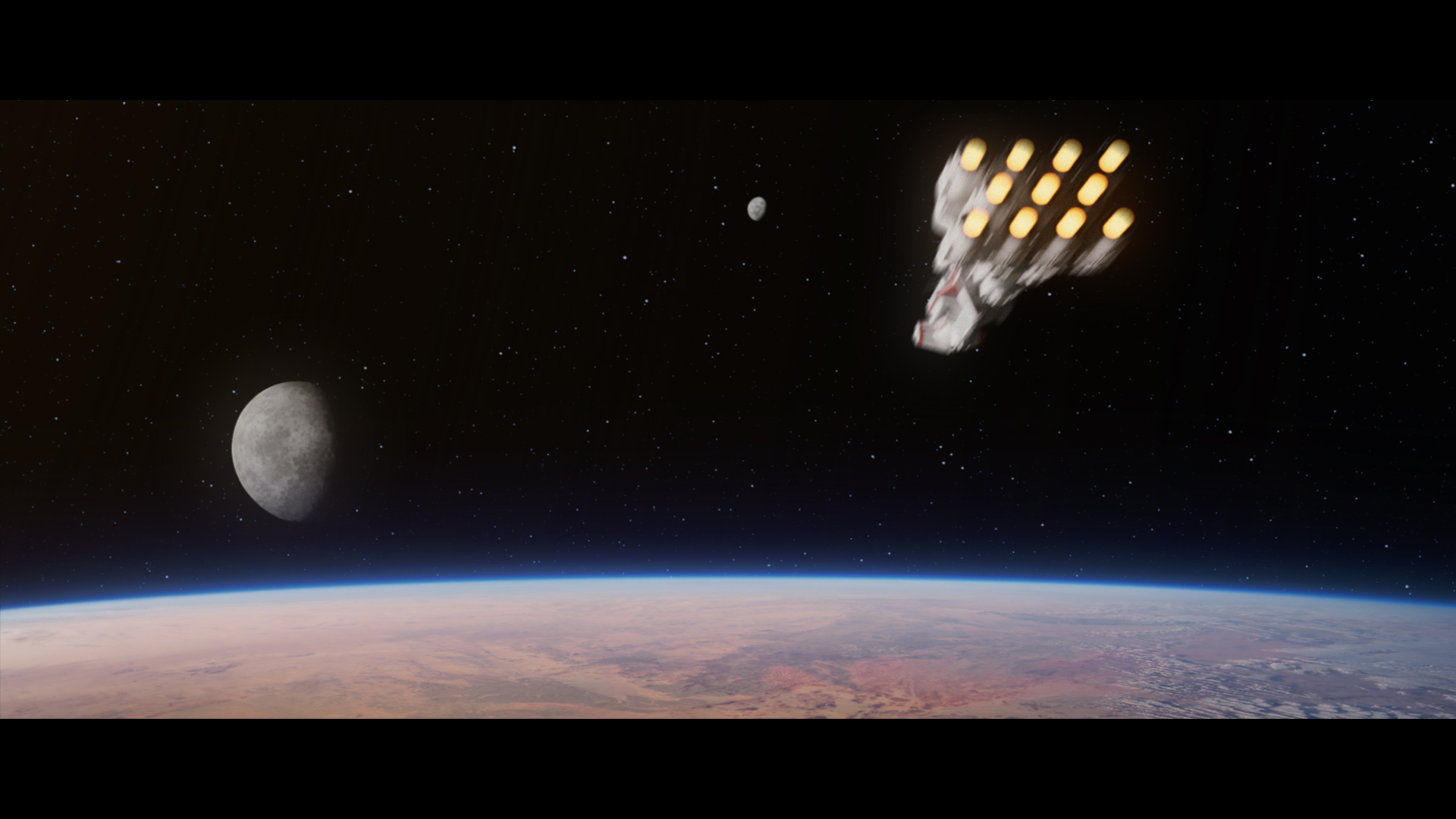 Wow! Man that looks nice. Quick question though, what program are you using to accomplish this work. Also, I would be interested in knowing some of the technical aspects of your planet creation as well.

I think this project seems great! Similar to what Ady has done but with a modern twist, which is what I honestly believe these movies need since the release of the sequels and R1. I’ve been kicking around the idea of doing something similar.

Sounds great! Thanks for the update

I’m sure as soon as there are high res versions of it, there will be

I am also curious about the progress of this.

Wrong forum, this should probably be posted in harmy’s thread or in the preservations forum

I am trying to find my favorite edit right now. Could you send me a link