Ewoks are not cute. If you went on a camping trip and a large group of small bears speaking another language armed with spears surrounded your campsite, I doubt anyone would be thinking how cute they are, especially when the cooking starts.

My problem with the ewoks isn’t the fact that they’re walking teddy bears, it’s the dumb slapstick they were given. If they had toned down the slapstick and given the ewoks a bit more of a threatening appearance, I.E. armor, sharp teeth, sharper weapons, I doubt you’d see people complaining about them much.

His whole channel is overanalyzing things in the search for misogyny where none exists.

That and taking so long in between uploads it’d make Fredrik Knudsen/Atrocity Guide blush. Except your average Fredrik Knudsen video has five times the research that Pop Culture Detective does and is invariably more engaging. Why watch another “these movies don’t like women and are therefore bad” video when I can learn about the Austrian Wine Poisoning, the Dolphin House, Deep Blue, the HaseKara Calamity/doxing saga, or TempleOS?

Pop Culture Detective got popular because he was on the “good” side of GamerGate, not because of any serious talent as a video essayist. While I do like some of his videos and agree with a lot of his points (e.g., why prison rape jokes are terrible), he’s hardly a standout.

But back on topic. My suggestions for little edits to better blend OT and PT would be to add back in the “this Sith Lord, sent by the Emperor, will be our undoing” line into ANH, the aforementioned Obi-Wan line tweaks, and maybe a little vision sequence in ROTJ to include a slight ROTS throwback (so Luke knows the face of young Anakin/Padme’s name). That way, an upgraded Hayden ghost (i.e., no Shaw body and a more wholesome smile) and Vader saying “Padme once thought as you do.” makes sense.

These are really good ideas, I especially like the one about adding Tagge’s Sith namedrop to ANH. Has anyone been able to find HD footage of that scene? I’ve only been able to find the hand-held celebration camera footage.

Hello, it has been a year and I finally found time to work on this project again. I thought it would be a good opportunity to do it now as my computer has been upgraded and I can work on VFX on this movie. First and foremost, I plan to re-do the Alderaan explosion scene to add in an extra shot, in which you can see the planet in an orbital view exploding whilst ships try and flee away from the impending doom that is behind them.

I wanted this shot to somewhat look like it was done using optical bluescreen, with the hand-drawn laser beam and the planet being a matte painting, which would fit the aesthetic of the film nicely.

So I made a quick photo on Photoshop and sort-of made it look like it was shot in 77, albeit a very rough concept although I might’ve added too much grain for the record lol.

I used an unused matte painting of Tatooine that Ralph McQuarrie made for ANH, some ships I found online, and an intentionally janky looking explosion that resemble those 70% opacity explosions literred around the ships during the Battle of Endor in ROTJ.

In other news, since SkyDude over in the Star Wars Trilogy Forums has done a very good cleanup up of the Mos Eisley drive-by shot by merging in different sources including 4k77, I’ll probably use that and slightly enhance it to make the transition alot more seamless.

Hey, man… the Book of Henry was awful, but DotF was still better than TRoS.

Let’s just say Treverrow said stuff that made me doubt his competence with the franchise.

From a Slashfilm interview in 2018:

“It’s a foundational myth. It’s a noble ghost story. Where a character lives on after death in order to guide a hero to find their strength and defeat ultimate evil. And structurally, I can’t…but you’re gonna print this, unfortunately. I’m saying this now. But the way that I look at movies, I do see Avatar and Titanic and Jurassic World [as] very similar movies. Henry was Obi-Wan Kenobi. And he died in the middle. And he left a set of instructions on how to take out the Death Star where Darth Vader was holding a Princess captive. And at the very end, when he had the target in his sights, he had to remember his training. Guided by this ghostly voice. And then Han Solo comes in with the Rube Goldberg machine and gives him the moment. And ultimately the Princess saves herself.”

Oh good lord. No wonder he got fired. On another note having read DOTF I think it’s pretty weak. Not a big fan of the force ghosts, especially Luke, having so much action. It’s very apparent Trevorrow wasn’t happy with Luke being killed off.

Make every line of dialogue in the series out-of-sync with the mouth movements, to really sell the idea that the characters aren’t actually speaking English.

For once us english speakers will know what it’s like to watch a foreign-dubbed film.

RoboCop 2 was pretty good, sue me. Book of Henry on the other hand… yikes

oh god don’t remind me of that movie

Rumor going around that these films, along with other old Star Wars content will be available come April 2

2003 Clone Wars!!! Yes!!! Excited as hell for this! Haven’t seen that microseries in years!

There was a rumour flying around that Hux would get eaten by a giant turtle in the third act of TROS.

I want someone to painstakingly VFX together Pryde executing Hux by throwing him to a giant turtle.

Was this an actual rumor? Did Steven King come up with it?

Not to start an argument but at least TFA and the “subsequent garbage” had characters that grew and you came to care about, and were more than faces with a single trait.

Rogue One is boring, that’s all. It’s not a poorly made film or anything, but the characters are just faces. They have one unique trait and that’s it, no growth, no real personality.

Yub Nub is fantastic. It fits the childish nature of the Ewoks way better than Victory Celebration, and is also way less generic than VC. I also DESPISE the planet montage, it looks horribly dated and includes Prequel planets that someone watching the OT for the first time wouldn’t recognize.

I would like to see the alternate version of the Palpatine/Mace Duel with Anakin watching, as it’s probably far better than the mess that was in the theatrical version, atleast from an editing standpoint.

Ever since 2015 I’ve done Saga marathons in December. I intend to continue this trend for the foreseeable future, as it seems Star Wars is sticking with December theatrical releases.

Probably would’ve looked pretty rough. Still an interesting little detail. Another to add to the list of Star Wars triva!

So, y’all still complaining about JJ Abrams making Luke abandon everyone he cared about in The Force Awakens? Or are you still blaming the person who had to pick up and tell that story thread rather than the person who came up with it?

I know you have a strong hate for Abrams but he didn’t come up with that idea either, Lucas did.

There is no merit to Greedo shooting at all, but there is merit to him saying Maclunkey.

Looks fantastic! I know this thread is already cluttered with people asking for links, but I’d also love one, too.

Having re-watched the movie recently for the first time in awhile, I can safely say I really love it. Now, it isn’t perfect, (no SW movie is), but it is still really good. I don’t hate Palpatine coming back at all, in fact I quite like it, I just wish that it was part of the outline back in 2014 so it could be hinted at in VII and VIII, but that’s entirely wishful thinking with hindsight. As mentioned by others on this thread, Exegol and zombie Palpatine are fantastic, and Snoke being an artificial creation of Palpatine isn’t a bad explanation by any means, better than not even being mentioned like in CT’s script. Rey being a Palpatine is fine, I didn’t like her being a nobody anyway, plus pointing out the reshot scenes is fun.

My biggest complaint is probably the cut scenes honestly. Unlike other heavily re-edited movies like Suicide Squad, the chopped up footage isn’t very extremely noticeable here, and alot of the cuts feel fairly natural or have creative transitions. The first act is by far the weakest and is also the most heavily edited, so that makes sense. Animatronic Maz doesn’t look the best, compared to CG Maz she moves far slower, but it is impressive the amount of detail they were able to give her.

Overall I’d give this movie an 8/10, it’s a fantastic end to the Saga and Sequel Trilogy, and is just a fantastic movie in general. It suffers from over-editing, but not to a horrible extent and the film still manages to carry itself. The characters are charismatic as hell, the locations are vibrant and more creative than in JJ’s other SW outing, and the villains are definitely more competent and threatening than in Episode VIII. Here’s to hoping we someday get some deleted scenes so we can make an unofficial extended edition.

Courtesy of my cousin, one of my christmas gifts was ‘The Star Wars Archives. 1977-1983’ by Paul Duncan. I was just reading through it and came across this photo; as it’s from LFL archives, I doubt I’ll find it online, so I took a photo of it. 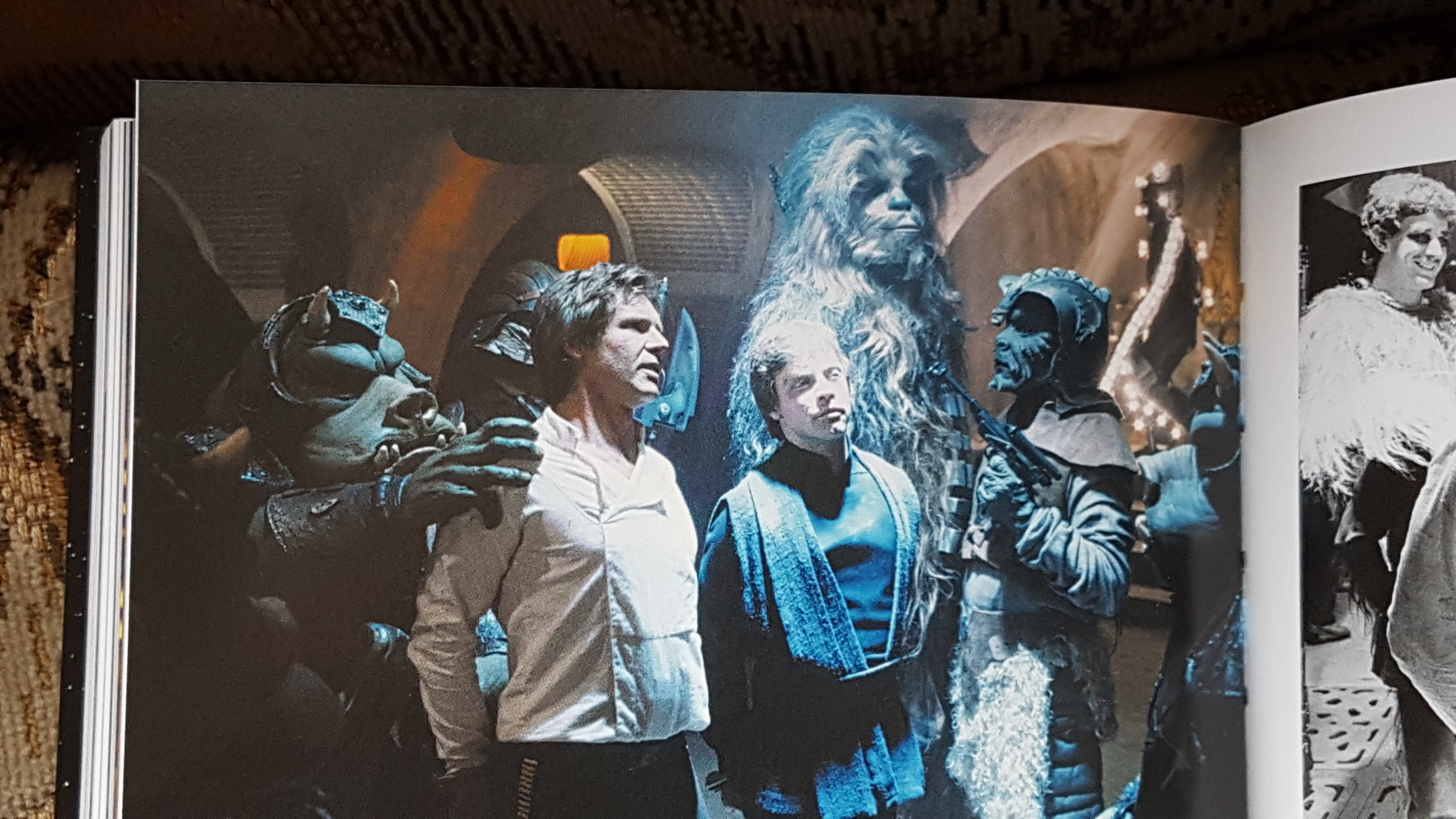 The caption for the image reads: “Han, Luke, and Chewbacca surrounded by Gamorrean guards. In the background right a man-in-lights walks by, as reference for the Lava Man creature, which was not included in the movie.”

So, it’s a ‘lava man’. They MUST have had concept art for that… what the hell does a creature made out of lava look like??

Only EU material I actually enjoy. The rest I could care less about/disslike heavily.

Great interview, thanks for sharing.

George had nearly all of The Empire Strikes Back written before Lawerence Kasdan polished it up. See J.W.

Well that was already known and Rinzler discussed it in detail in his book. Even Kasdan basically confirmed that by saying: “The structure of the story was all there–it was the skeleton for a movie. What was needed was the flesh and the muscle.”

I’ve said it before and I’ll say it again: George is good when it comes to writing a general story outline, but horrible when it comes to dialogue and character arcs. Kasdan came on and was the guy who really fleshed out the dialogue and characters, as he did with Jedi. Had Lucas gotten Kasdan or someone who was half decent at writing dialouge for the Prequels they would’ve atleast been slightly more enjoyable.

There’s absolutly no mention of any lightman in the 1981 script that I could find, or the revised '82 script either. If it were to occur anywhere, it’d be somewhere in this small section. Although not written anywhere, I’d imagine the Lightman would be a guide through the darker areas of the Palace.

9 INT DUNGEON CORRIDOR
One of Jabba’s Gamorrean guards marches Artoo and Threepio down a dank, shadowy passageway lined with holding cells. The cries of unspeakable creatures bounce off the cold stone walls. Occasionally a repulsive arm or tentacle grabs through the bars at the hapless droids. Artoo beeps pitifully.

And that scene/segment is in the movie, so no mention of the Lightman whatsoever in the script. I checked the Lost Media wiki, nothing there either. This scene is truly a specter.