I think a better way to make the mouth move with the lines well is through the use of AI software that does lip-sync style outputs (kind-of like Deepfakes but using a single image and you can change what the person can say, i.e WOMBO.AI which is on the App Store, but I’m sure theres PC alternatives)

Hi, please refer to the “Star Wars Preservation” section of this forum for your inquiry as this is the wrong place to ask. You can also refer to the Star Wars Despecialized thread itself and see if there are posts with similar issues, if not you can just simply reply your problems: https://originaltrilogy.com/topic/Harmys-STAR-WARS-Despecialized-Edition-HD-V2-7-MKV-Released/id/12713/page/678#1435535

Another one for today: I recut the Mos Eisley opening sequence along with adding a soundtrack (that I borrowed straight out of Revisited) thats uses neither of the overly loud theatrical version or the one with the SE since it gives me traumatic flashbacks of the CGI Jawa antics (lol)

I ended up not using the new wide shot of Mos Eisley with the SE buildings since it was too short and didnt really do much but break the pace of the scene. I’m pretty pleased with the final result, albeit the SFX isnt completely there yet.

Well, I did this Death Star explosion based off the theatrical version, but I couldn’t get to match the two Death Stars so I’ll fix that in the future:

Hello, unfortunately the VFX shots won’t be finished for a long time as have I more obligations and stuff in my personal life, so I guess we should move that to a V3 of TROS:A.

Also, one more thing. Has any one found the original matte painting for Tatooine that they used in ROTJ? 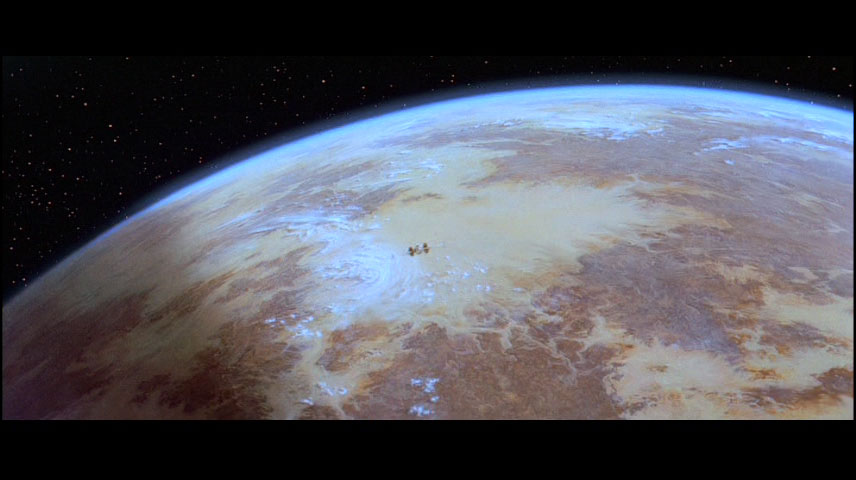 Heres another test render, but this time of Tatooine. The atmosphere and planet textures are something left to be desired with and I’ll definitely fix it. Unfortunately the final shot won’t contain the ANH matte because I cannot for the life of me figure out how to meticulously recreate the matte painting in 3D space down to the cloud swirl pattern and ground colors. 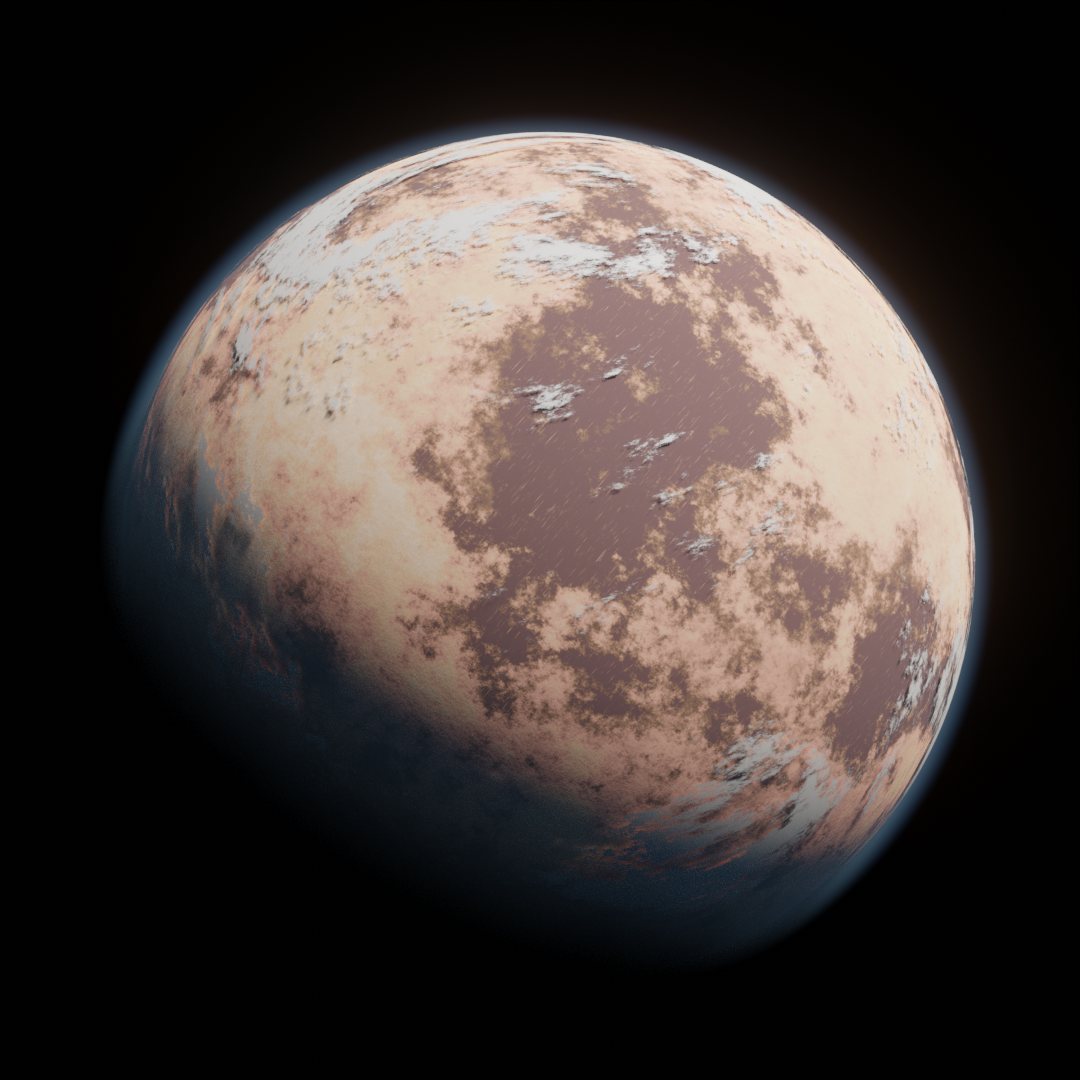 Well, the VFX I’m doing should probably be consistent to how ILM is doing with the shots (in which they are mainly going for a realistic look, yet exaggerated to add more stylistic features) and viewing the Falcon shots in TROS, the only indication for a sun in space are sun rays (it’s impossible realistically but it works stylistically in the film which I’ll implement) and lens flares.

The only time we see a sun in the film is during the lightspeed skipping sequence, but its brightness levels are similar to a sunset and it’s really not as bright.

Besides, the suns will be in the shot (Falcon taking off from Homestead) preceding this final shot so we’ll still get that “suns in horizon” in the film.

I feel like it’s really difficult to realistically portray suns in CG, as there are too many factors to go along with it.

If we are talking from a realistic standpoint, those two suns would both be extremely white (or atleast one of them would be very slightly red) without the atmosphere due to lack of Rayleigh scattering (this is the reason why the sky is blue; the sun hits the atmosphere and in turn blue light is scattered more in the spectrum and the sun looks slightly yellow or red from the lack of the blue light.)

Also you have to consider the anamorphic lens flare, how bright you want the suns to be? (I presume they are in the Goldilocks region in which the sun is not too close, nor too far which can inhabit life so they’d be pretty bright if you point a camera at it) and the way it looks overall in terms of volumetric lighting and many, many factors which are insanely hard to pull off. Besides, the two suns are insanely close to each other that when viewed from space theyd look like a single giant light source.

For reference, here is how the sun actually looks like in space: 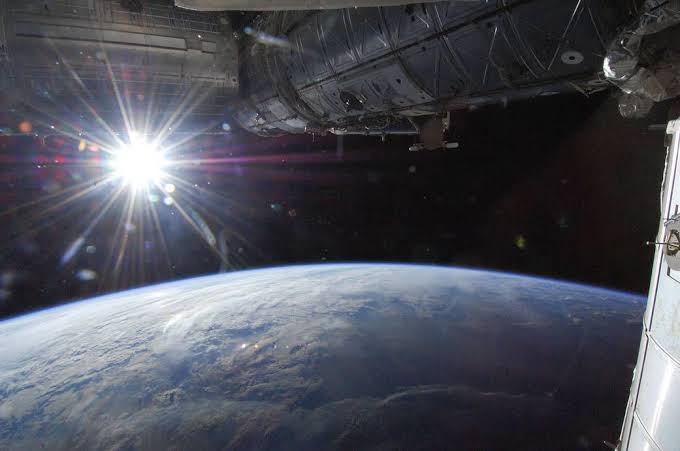 This is one of the reasons why you don’t actually see the sun nor the light source in Star Wars, since its very difficult to pull off. These shots were planned to avoid the light source to be shown.

However, I am thinking of planning two shots, mainly the first shot showing the Falcon leaving the homestead with the suns slowly rising up in the sky (as it has been stated here that this scene takes place at dawn) and the second of the planet to simply leave the Tatooine horizon and jump into hyperspace which then iris wipes to the credits.

Heres a mockup showing the Tatooine matte painting from ANH into the last shot of the Falcon leaving Tatooine. This is just a thing I mocked up in Photoshop and is not an actual 3D render, although the Falcon is the only 3D thing in that shot.

I attempted to give it that overly-teal look the color grading for TROS had, and added a lens flare which is JJ’s signature look.

It was supposed to jump into hyperspace at the final frames, but the animation looked extremely weird and I couldn’t get that hyperjump trail that poppasketti did.

Put together a little concept for you’re Falcon ending idea.

What software did you use for this?

Yea, for “I’m a Jedi” just give it a slight pause in between those words.

It was supposed to jump into hyperspace at the final frames, but the animation looked extremely weird and I couldn’t get that hyperjump trail that poppasketti did.

For reference, this is how the shot looks without compression
(I added way too much film grain so it looks noisy)

Speaking of extending the ending of TROS, heres a test shot of the Falcon moving across space trying to match the look and lighting of TROS. Unfortunately, Streamable has decided to clip the dark and light values again making it look more contrasty than it should.

I might extend the final shot down to two shots: The Falcon flying off from the homestead, and another showing it flying away from the planet itself into hyperspace, for more adventures to come.

This might give extra room for the score and to keep the pace relatively smoother and not make it feel too much of a rushed ending.

Also, I’m pretty sure the Tatooine suns would be in the horizon of the homestead during sunset as shown in ANH.

I pretty much got the model untouched from Sketchfab but I removed the landing legs. I’m still a novice to Blender so I don’t really know how to make textures, models and stuff.

At the end, anything that looks weird will always be hidden in motion. A good motion blur + match grain from the original Blu-ray would hide any “over-perfections”

I’m also trying not to make it look as real as possible, just trying to line it up with the visual aesthetic of the film. TROS isn’t too overly-photorealistic with its VFX (and they probably didn’t care nor have the time to finish it due to the rushed nature of production) and so anything floats under the sun.

I attempted to recreate the lighting of the Falcon in TROS using Blender 2.92, it somewhat looks more like a miniature than a CG ship. I’m planning on probably fixing the last shot wherein it will fly away from Tatooine, but instead of the sunset, it would go straight into hyperspace from space. 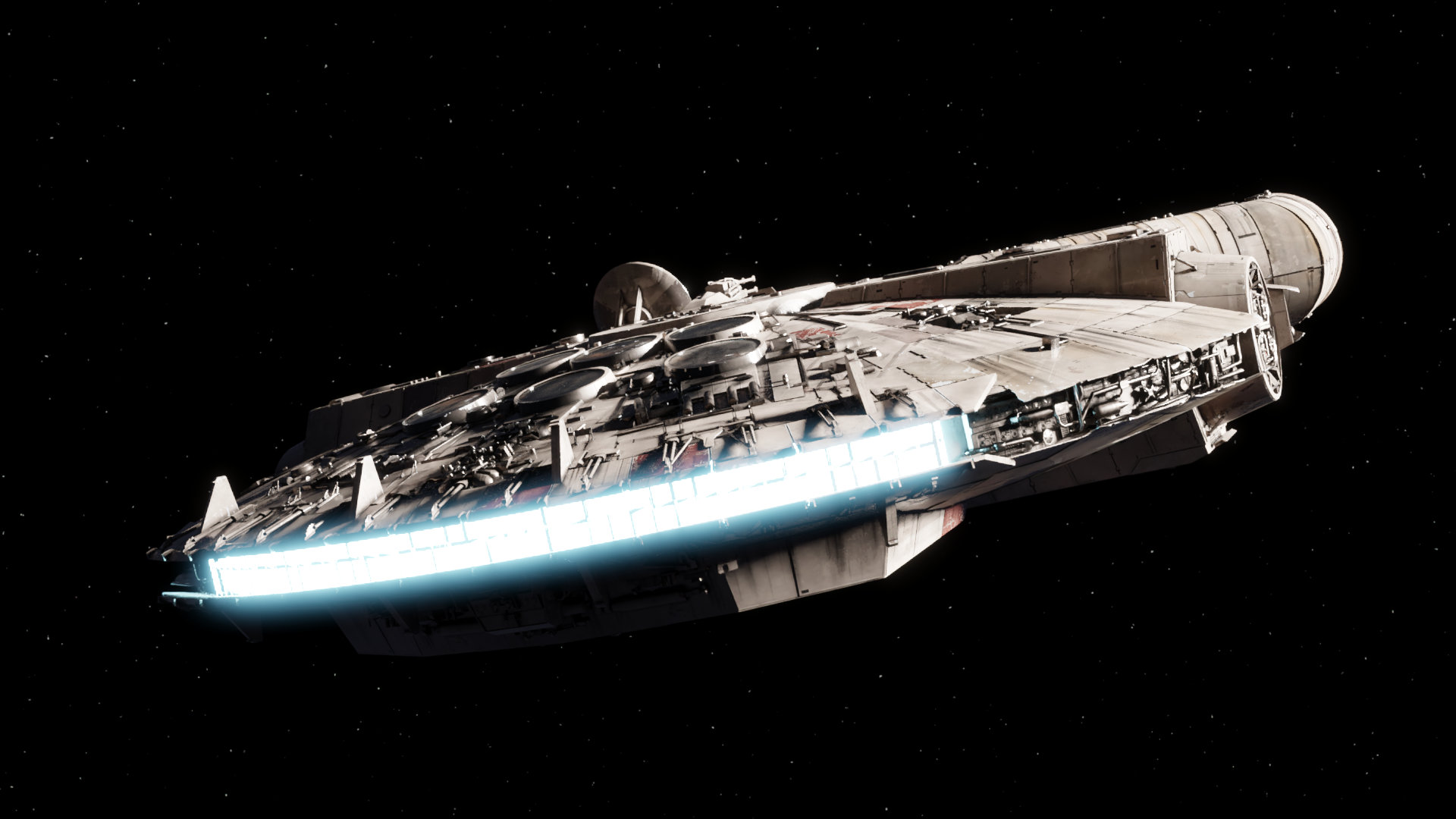 I wonder if you can re-do Adywan’s Emperor scene to deepfake/EBSynth ROTJ Palpatine onto an actor.

I attempted to hand-animate the shadow on the bottom of the landspeeder but it turns out more difficult than I thought and it doesnt look like the shadow actually “moves”, rather it looks like it slowly pans, similar to how the TIE Fighters in the trench run were shot. I really need help on this, so any VFX help is appreciated!

Yeah, I think Streamable just uses some pretty hefty compression. It’s great for showing off tests and mockups, but less so for sharing something in high quality. (I’ve been uploading my finished clips to Google Drive instead.)

Ooh, hmm, I don’t know! My gut was telling me that the lightning should be fairly big and bold and dramatic at this point - and I adore how it looks right now - but I’d definitely be interested in seeing a slightly more subtle approach that Rey would barely notice.

Seriously loving it though, Dat_SW_Guy. Thanks so much for helping out with this shot!

(Depending on what sort of sound effect people want, I can certainly add mine to the finished VFX shot. I can also try a version with Snoke’s sound effect, just so we have a fair comparison and can all decide what works best!)

Yea, are you able to re-do the effects to add a more subtler sound? I’m afraid I’m not that good with audio design haha

Yeah, I watched the theatrical cut of this duel and noticed that Rey didnt care that she literally Force-pushed the shit out of Finn there, how much more if she straight up electrocuted him in this cut? LOL

I can see how Rey barely reacts to it, I’ll probably make the scene similar to the removed lightning sparks on Palpatine’s hand in the beginning of the movie, it’s visible to the audience but not to Rey.

Hello, thank you all for your suggestions. Firstly, The shot of Finn recieving the blast wasnt created there. However, I just whipped up a quick “proof-of-concept” of Finn a actually getting hit with the lightning, albeit it looks alot more deadly, overkill and less “subtle”.
The sound effect was from YouTube and I just did a right-left pan to sonically flow with the visuals a bit more. I completely cut out the wide shot of him flying back and left the last shot unfinished (since I’m too lazy to edit it now, but I’ll finish this shot sometime tommorrow) but also since I’m not so sure as to how to structure the shot.

I don’t really know how to make it subtler, so any help is appreciated! https://streamable.com/gyj6k2

SIDENOTE: I edited the shot with 16-bit colorspace, but the one being uploaded to streamable seems to have completely clipped the highlights and shadows so I don’t know what’s up with that.

Heres a test VFX shot of Rey shooting out Force Lightning instead of the Force Push to signify her instability, the compression makes it look slightly weird but it’s okay: https://streamable.com/cqtffo