In the photos I posted above George Lucas is meeting with toy executives from Kenner. Gotta get the merchandise out on time, after all! 😉

The eyes on the helmet remind me of the eyes painted on the prow of ancient Greek ships. Would make sense if Boba Fett was originally supposed to kill Han or Leia in Greek tragedy fashion, leaving Luke as “the character who survives Star Wars III”.

(Or maybe Fett could actually be Luke’s lost sister and they get together Game of Thrones-style, with fateful consequences in an Episode IX set 20 years or so later.)

Apparently there were two different designs of the Boba Fett helmet with “eyes”: 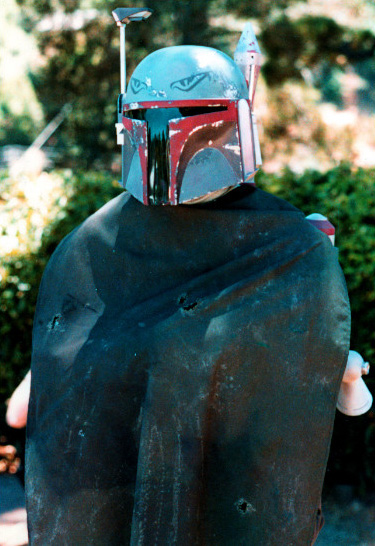 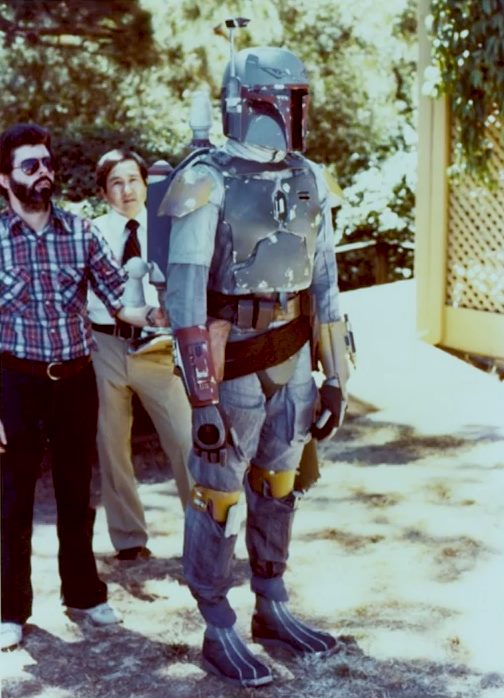 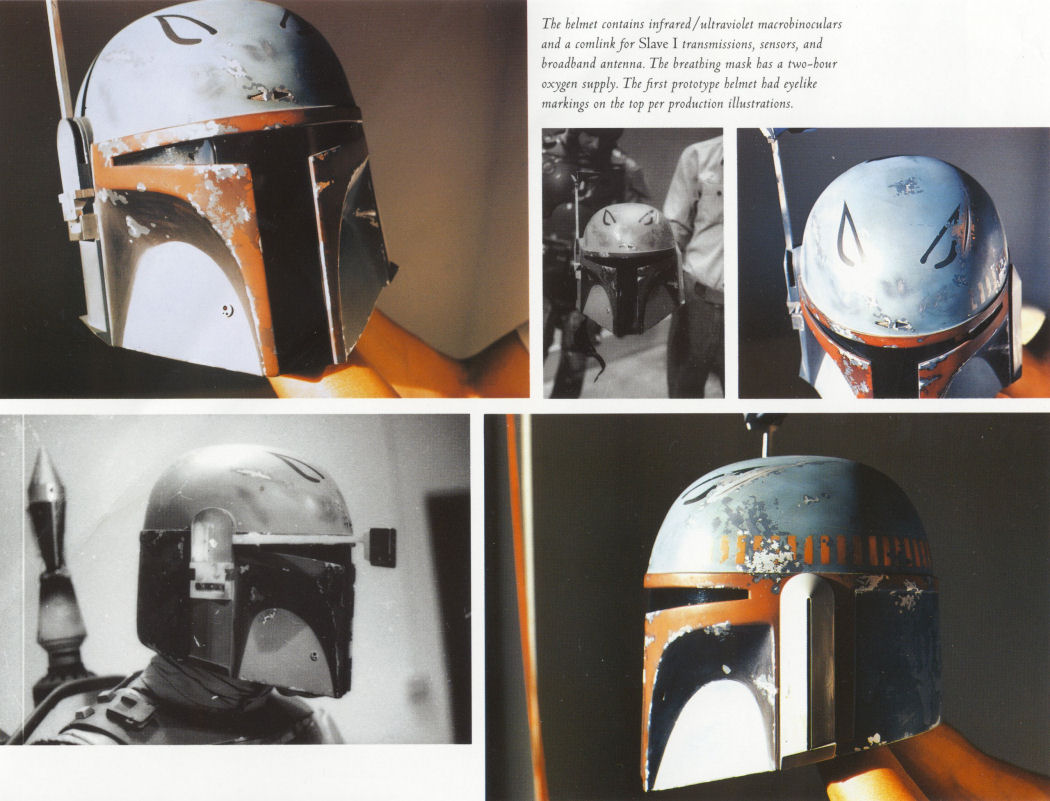 The version with lower eyes and pupils evidently came first, followed by a more stylized design placed higher up on the helmet. The Boba Fett Fan Club site has an excellent rundown of the variations.

This one’s pretty interesting. Those markings weren’t on the helmet in the finished film so I’m guessing this is from a costume test or something like that. 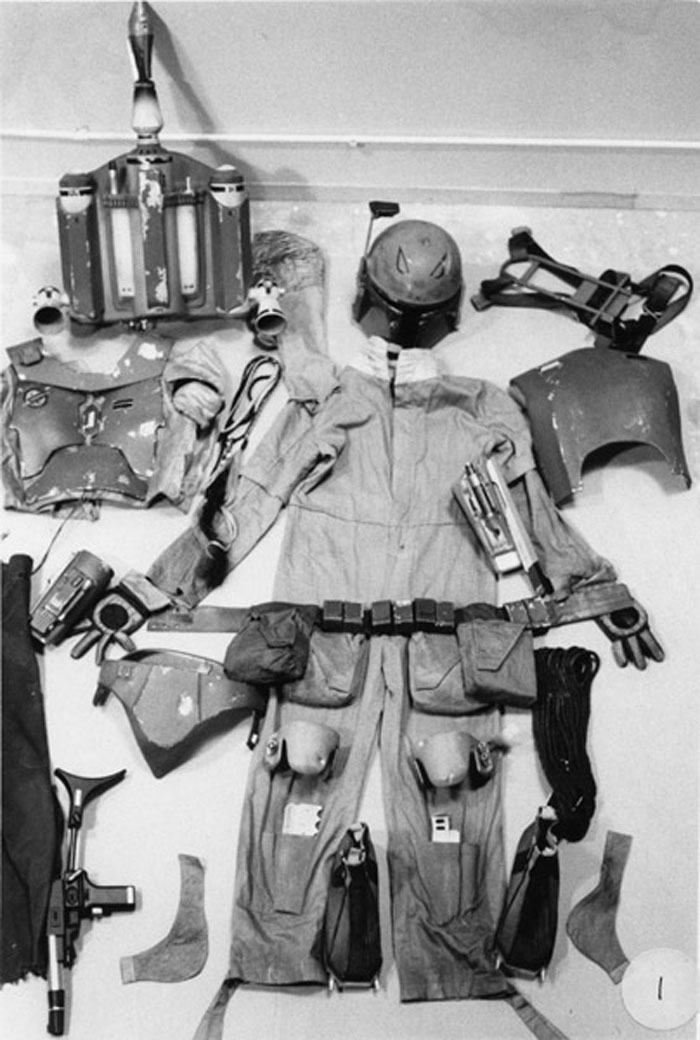 Back in the day the Boba Fett fandom knew all about how his armor changed color between films, and about various costume tests, both this one and the all-white version. Interesting how that sort of thing gets forgotten generationally. 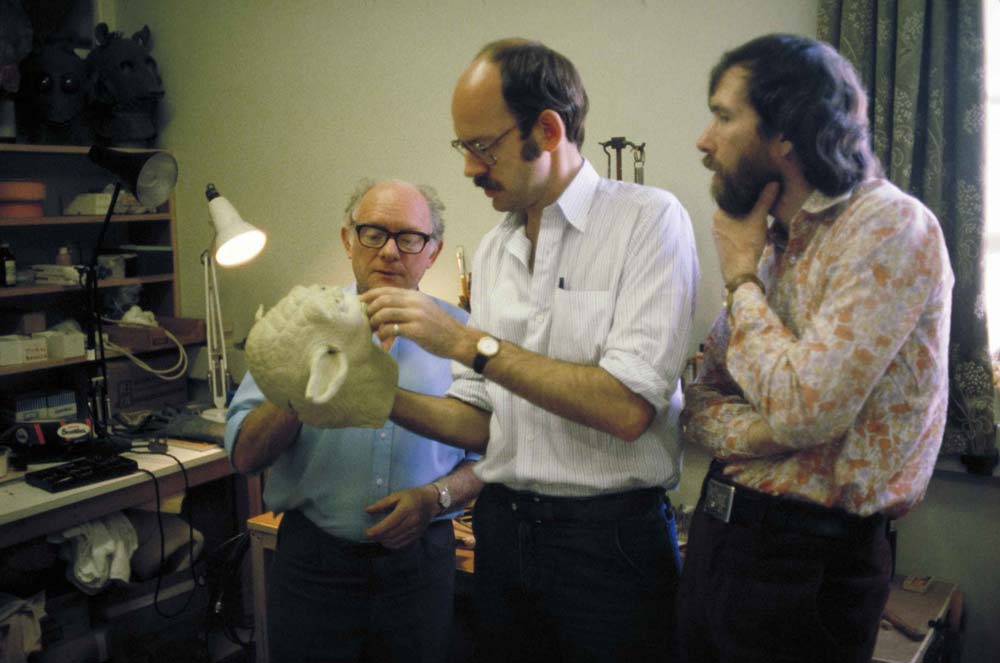 Did John Mollo do costumes for that series? The ribbed-shoulder style also shows up in his work for ALIEN. 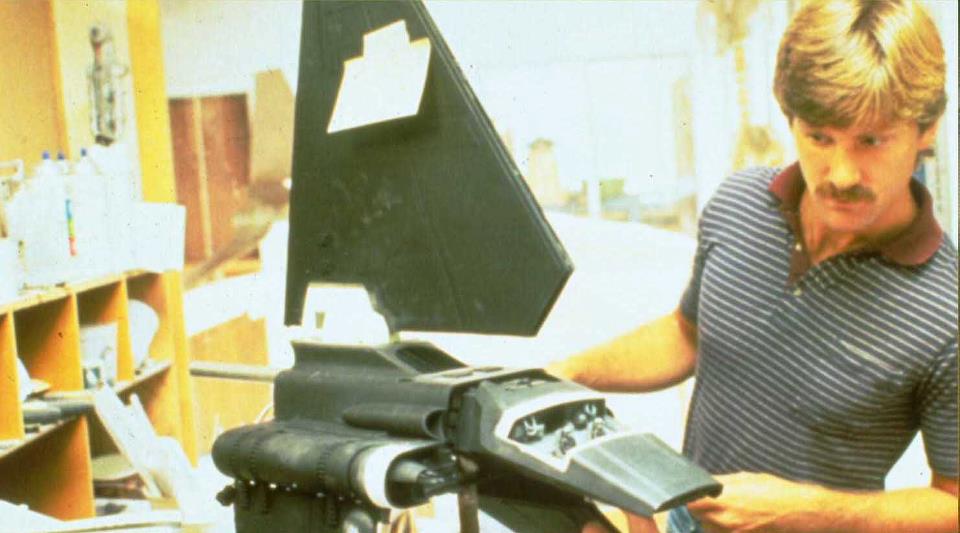 Maybe the Imperial Shuttle was going to be a charcoal-gray color at one point? 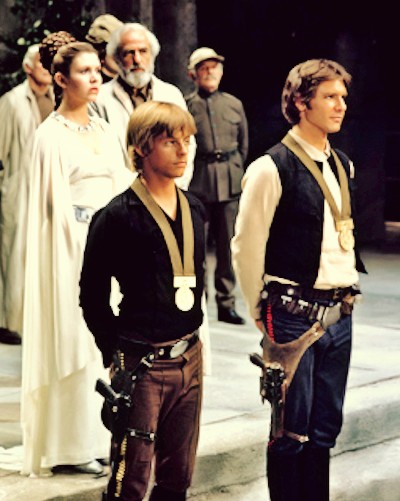 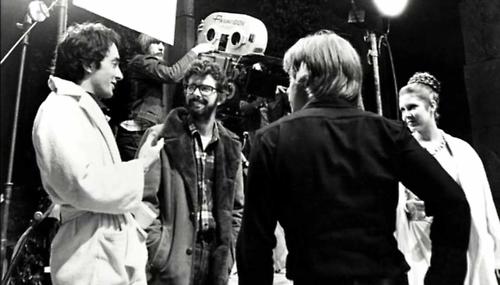 A couple images from an alternate take of the medal ceremony where Luke isn’t wearing that outlandish yellow jacket. 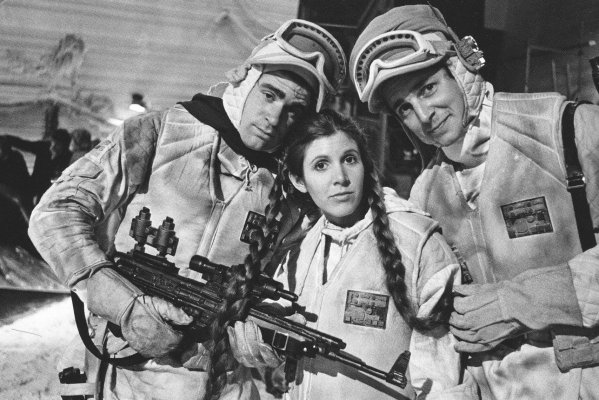 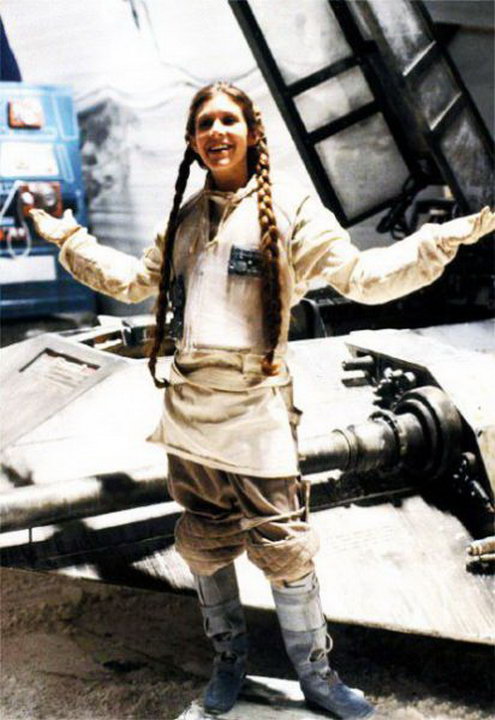 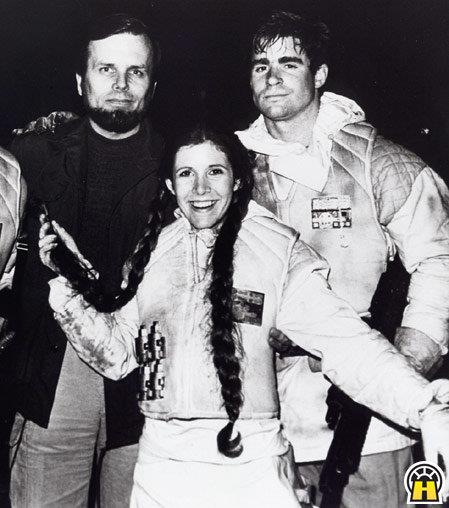 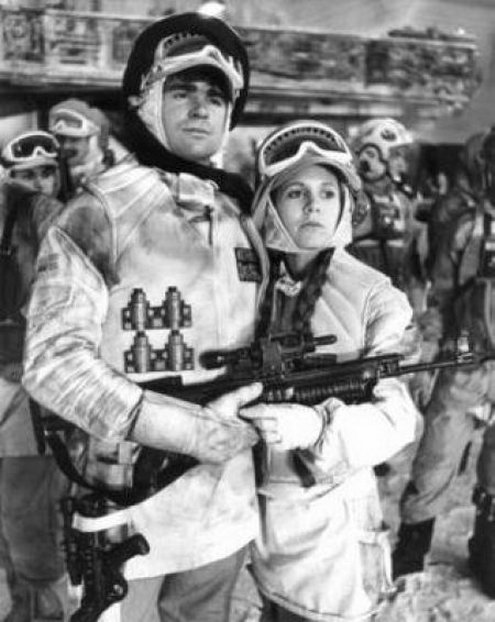 Looks like Leia’s Hoth hairstyle may have been different originally, with two long dangling plaits instead of a crown braid. 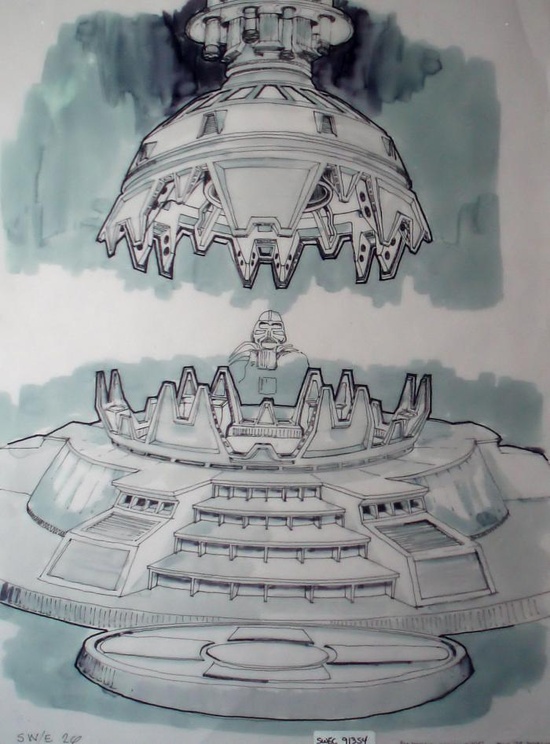 Never seen this concept art for Vader’s meditation sphere before. 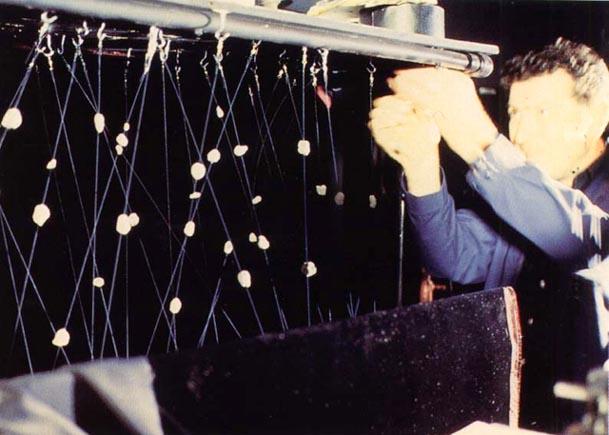 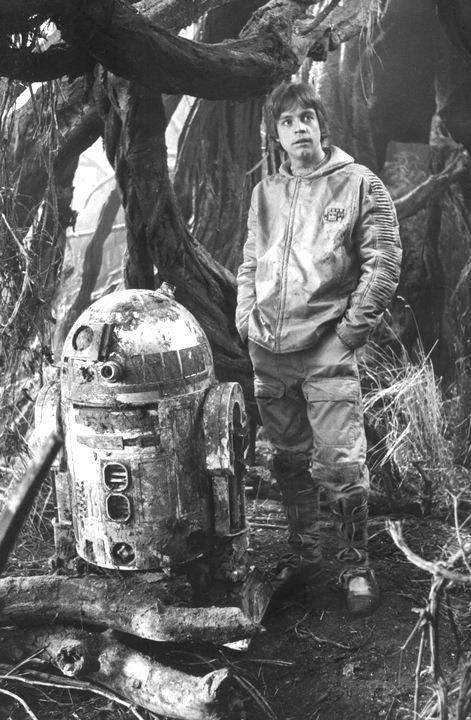 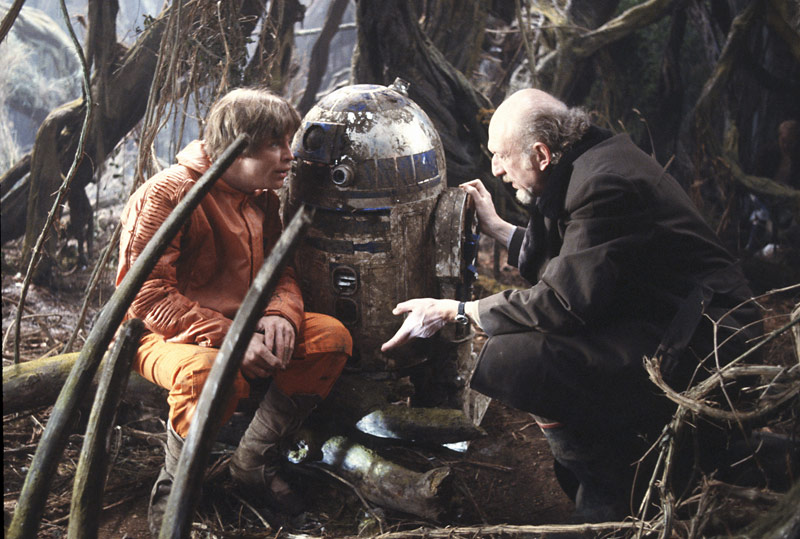 Interesting to see that Luke’s jacket under his flight harness is detailed to be camera-ready. 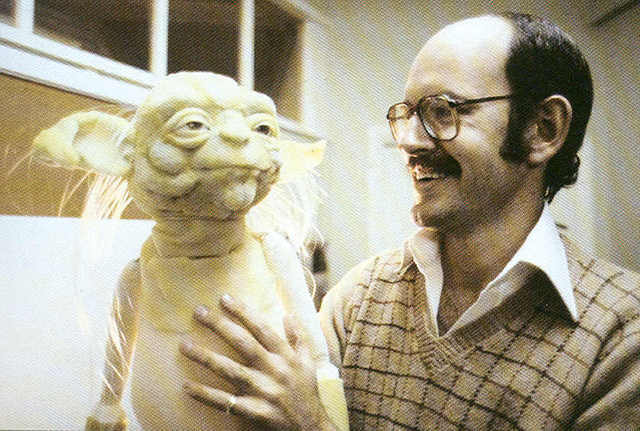 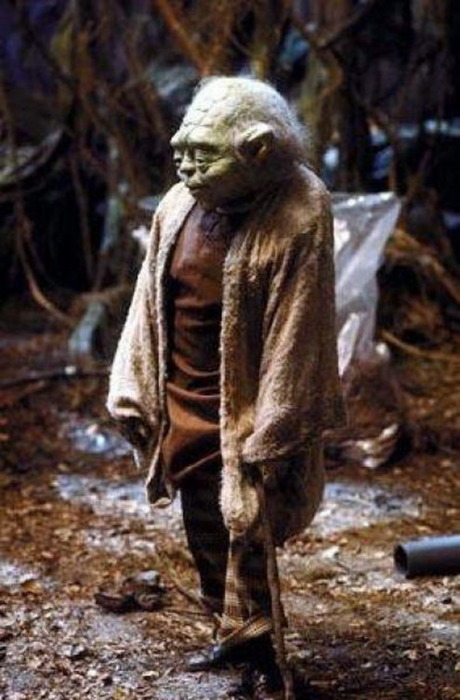 Yoda with legs! (The outfit was worn by Deep Roy.) 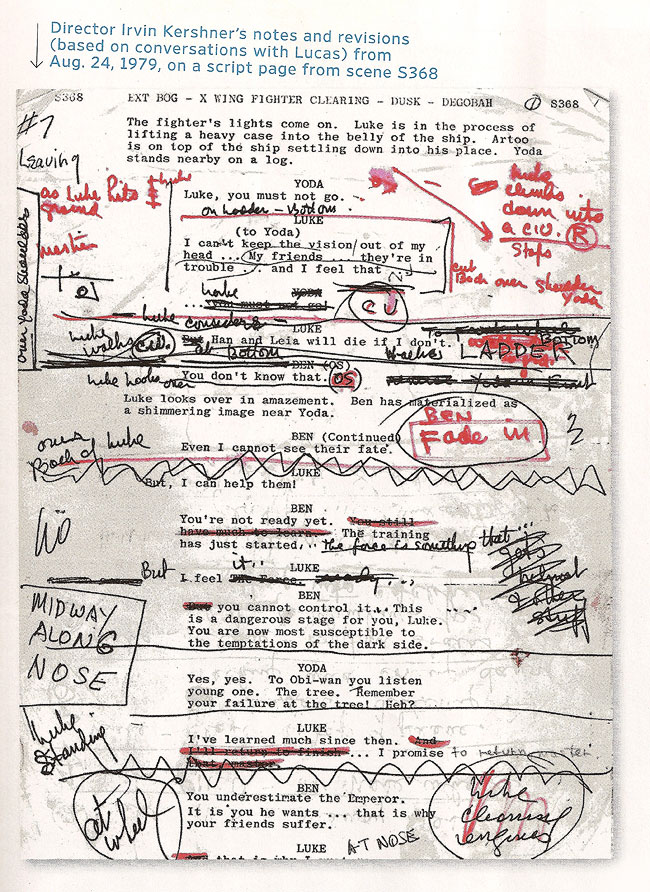 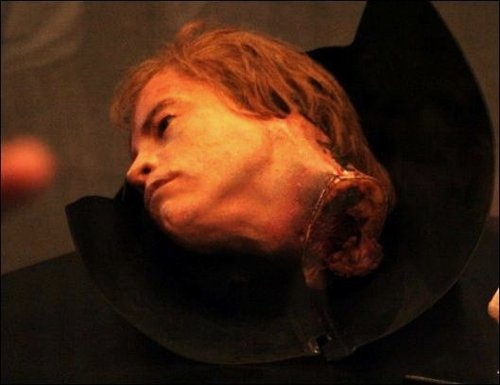 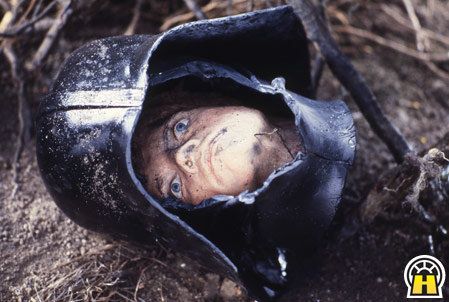 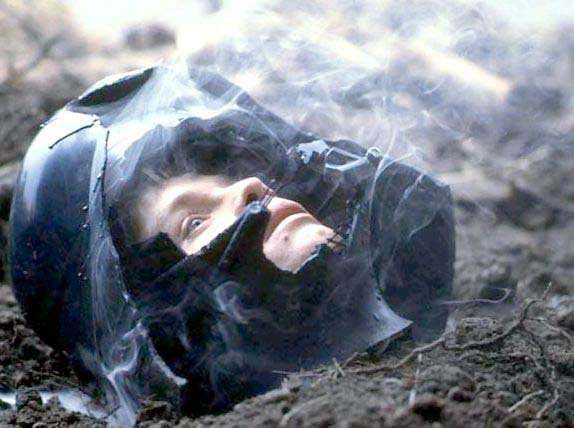 Seems they tried using a puppet Luke head for the cave sequence and it looked obviously fake, so they went with having Mark Hamill stick his head in a diorama. 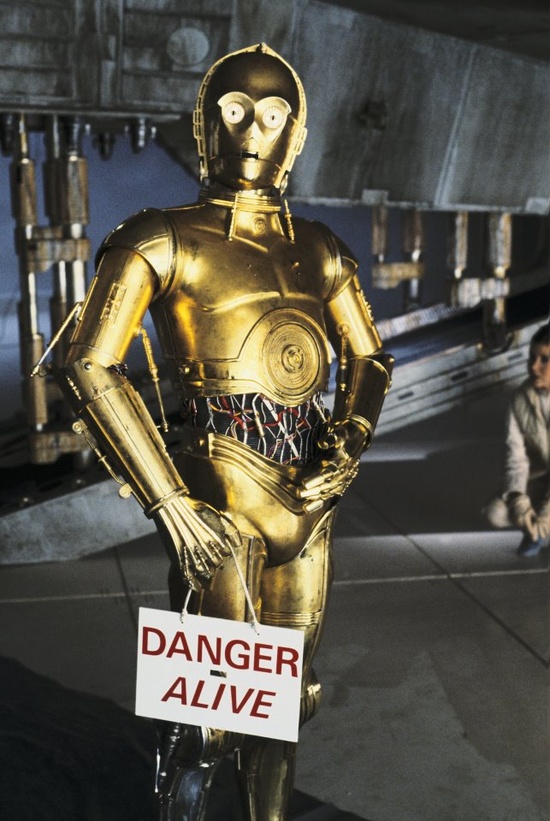 This droid is ALIVE!

BTW, does anyone know why they didn’t build the entire set for some of these shots, like in the photo above? Al the windows are clearly there in some BTS photos, and its really obvious (pre-SE anyway) that all but the central window has been added in post when you watch the actual movie.

I’m assuming that middle shot is from ROTJ? They built the entire bridge for Jedi but only the single window for Empire (as far as I know).

Ah, that makes sense. The person who uploaded all the photos to imgur had it among the ESB photos so I just assumed it was from that movie.

Still an odd thing to do though. I can’t imagine adding a few more windows would have cost them much, seems more like the kind of budget cut you’d do for a TV series not a big blockbuster movie.

Apparently there was a concern that Ralph McQuarrie’s bridge design with the different sizes and angles of the windows might be too expensive to build. Some of Joe Johnston’s ESB storyboards show a simplified version with rectangular windows instead. I guess they compromised by choosing McQuarrie’s design but executing it mostly via matte paintings.

But as Alan Arnold pointed out, he was well enough to attend protests at 10 Downing Street against a tax that would raise the price of cinema tickets.

If Guinness ever enjoyed working on SW, that time surely passed when Lucas decided to kill off Obi-Wan. It does seem like Guinness regarded that change as an unforgivable betrayal. It almost certainly offended his sense of professionalism, and I don’t think his attitude to the series and to Lucas ever really recovered from that.

Really? From what I’ve heard, Sir Alec didn’t really want to come back for ESB, and considered using an eye condition he had as an excuse not to resume his role. In the event, some of Obi-Wan’s lines were shifted to Yoda (as both Dale Pollock and JW Rinzler attest), and Guinness ended up filming on ESB for all of one day.

Peter Cushing is clearly having fun on SW in a way that Alec Guinness isn’t. Guinness a lot the time IMO is phoning it in, probably feeling like “why did I take this film, this is so cheesy, it’s so beneath me.” Whereas Hammer horror veteran Cushing is quite obviously having a blast and it shows in his performance.

Perhaps so. That’s the sort of distracting visual artifact that leads to messing with the image in other ways - such as the “Emperor’s slugs” in ROTJ that were created to hide a distracting edge on Ian McDiarmid’s lumpy face makeup.

And maybe the original “Darth Vader” was Obi-Wan’s other pupil, and he disappeared or was killed, but Anakin assumed his name for some reason? Interesting concept.

Back in 1975, SW costume designer John Mollo designed an early version of the Imperial logo, based on the Starfleet/Enterprise arrowhead in Star Trek.

It was meant to suggest a Federation that had become corrupt and turned into an Empire.

Those shots of Carrie riding the Jerba are fascinating. One of the Mos Eisley streets was filmed as a set in England, right around the time Carrie arrived on set for the first time. So those pictures were likely taken just as she was joining the production.

Shouldn’t they still be behind the Falcon though, based on their size? They’re clearly too small to be in front of the Falcon.

If you watch the shot in motion, they start out much larger in the foreground and head backwards into the distance as the Falcon approaches from the opposite direction. I agree that the scale is a bit wonky, but the composition in terms of relative planes seems fine.

THIS (a few frames later) is a compositing error.

There is a 1975 John Mollo sketch of Jabba in Rinzler’s Making of SW - he’s basically humanoid but has a third eye in his forehead.

Looks to me like in the second image she’s covering her breasts with her right arm (which is bent at the elbow accordingly) and holding a blaster in her left hand. Though I guess it could also be the top of her dress, with her right arm held behind Luke’s back.

But the first sketch does look like Leia is topless: her skin tone is drawn slightly darker than the loincloth she’s wearing. And in the third image her left breast has popped out of her shirt while she’s being tortured (you can see the line where the fabric has slipped under her bust).

Also: this sort of thing is probably the real reason why Lucas thought Leia wouldn’t wear a bra under that dress.

The trappers speak in a strange language, and although they appear slightly human, they are slimy, deformed, hideous looking creatures. Two of the trappers yell at one another in a friendly argument. One shirtless creature goes into a “crawler,” and the remaining eight laugh hysterically. Starkiller moves further out on the limb to get a better view. A couple of pieces of bark break loose, and float a hundred feet to the ground. The trappers fail to notice. Moments later, the shirtless trapper emerges from the crawler with Princess Leia held unconscious and half naked over his head.

Starkiller’s rage knows no bounds. With a terrifying Jedi war cry, the young captain jumps from the tree, sails over a hundred feet, and with great agility, lands in the middle of the startled trappers. In one continuous rapid motion, he ignites his lazersword and cuts down three of the vile creatures.

Also, John Mollo’s notes show that one concept for Leia’s prison attire in the 1975 third draft was a “smock” of some sort, which was skimpy enough that she would wear some of Han’s clothes after reaching the Falcon.

^ my response from that same thread…^ I highly disagree in all cases . Artists who have studied life drawing typically draw the "nude "figure and build it up from there , adding drapery and then erasing the construction lines… Mcquarrie has studied life drawing . The "nipple chain " you see is a set of lines to establish form and indicate where shadows will fall . What you claim is akin to saying the artist in this example intended these figures to be nude…https://seattleartistleague.com/art-classes/teen-figure-drawing-clothed-afternoon-july-6-10-ages-13-18/

At any rate , Star Wars was never conceived as a film containing nudity . Do you have any articles or behind the scenes interviews to show as proof of what you claim ?..now you cite some examples here, but your conclusions are pure conjecture and not solid proof .

Leaving aside that one sketch that you keep mentioning, the other drawings do appear to show a bare-breasted Leia wearing only a loincloth, or at the very least having enough of a wardrobe malfunction to alarm the MPAA. Or else why is Leia covering her breasts with her arm in the second sketch?

And how do you know that “Star Wars was never conceived as a film containing nudity”?