What’s even more amazing is that the ILM crew were working on other stuff also for ROTJ, that might or might not have been on the chopping block for Black Friday - eg, there was apparently an attack on a giant Imperial “communications ship” that had some form of modified Star Destroyer model, glimpsed in a couple of reused shots in the finished film.

And unlike Jerjerrod aiming the Death Star at Endor and flooding the tunnels with countermeasures, this wasn’t even in the script! So they were doing it for reasons not connected with simply making the shots the film needed for theaters.

You are transparent. I see many things. I see basements within basements.

(And side note - isn’t it interesting that Lucas had that name already in 1974, yet Tolkien’s decades-in-the-making Silmarillion published in 1977, somehow also used the name “Yavanna” for the goddess of plants and greenery?)

Also, and may God forgive me, I do find the idea of Vader having sideburns under his helmet hilarious.

Very well put. In the rough draft even “the Force” was sort of a general precognition thing, but not telekinesis, lightning, etc. The Jedi were fantastic warriors because they were super well trained, like DUNE’s Bene Gesserit or Sardaukar.

But the second draft veers hard into mysticism, making Force powers much more like magic and putting a heavy emphasis on it being passed down via familial lineage, which later drafts actually dial back.

“In the future it will become even easier for old negatives to become lost and be “replaced” by new altered negatives. This would be a great loss to our society.”
– George Lucas, 1988

In the years since he’s done a very good job of showing us why that’s a prospect to be feared.

Not that the Lucas of 1988 is inconsistent with the Lucas of 1997 and onward. Far from it. It’s more like an angel and a devil making the same point. (A bit like Palpatine masterminding both sides of a war, one might say.)

Off the top of my head, I’d guess it was symbolism of the “triune God” represented by three colossal Star Destroyers/one colossal asteroid. Coupled with an allusion to ancient Byzantium, used to symbolize Heaven the way it does in some of WB Yeats’ poetry; since Byzantum’s two major chariot teams bore the colors Green and Blue, with the Emperor usually bestowing favors on the Blues rather than the Greens. And related to other stuff in the Lucasfilm vaults that uses this symbolism, eg, perhaps some WILLOW sequels.

Other than that, I don’t really have any ideas.

I’ve mentioned this before elsewhwere…on the VHS 1995 THX fullscreen release , there is a gaffe with the lasers on the TIE Fighters being blue instead of green in ESB. It happens right after the Star Destroyers take evasive action and goes into the asteroid canyon chase . It looks more like the laser fire from the Cylon raiders in the original Battlestar Galactica for a few moments , then reverts back to the normal green fire . I wonder what the story behind that was ? Any speculation or definitive answers out there ?

Update - no screenshot, but I did confirm that this exists, after spending most of a morning digging through my closet to find my old VHS player and tapes.

Specifically, there are three affected shots just after Han says “Great. Well, we can still outmaneuver 'em” (in between which there’s the scene where several Star Destroyers nearly collide and an officer shouts “Take evasive action!”).

In the next shot where we see TIEs firing lasers (just after Han says “We’re in trouble” and leaves the cockpit), they’re green. But in the next two shots where TIEs fire lasers (as the Falcon is skimming the surface of the gigantic space-slug asteroid, just before the TIEs slam into the canyon walls), they’re blue again.

All the shots with blue lasers have either three Star Destroyers or the giant asteroid on screen; whereas the shot in between with green lasers (besides the TIEs & the Falcon) has just an empty starfield.

That’s all I noticed so far, though I haven’t checked other scenes on that VHS tape. And I don’t have any other pre-1997 VHS tapes (fullscreen or widescreen), so I don’t know how far this issue extends.

I’ve mentioned this before elsewhwere…on the VHS 1995 THX fullscreen release , there is a gaffe with the lasers on the TIE Fighters being blue instead of green in ESB. It happens right after the Star Destroyers take evasive action and goes into the asteroid canyon chase . It looks more like the laser fire from the Cylon raiders in the original Battlestar Galactica for a few moments , then reverts back to the normal green fire . I wonder what the story behind that was ? Any speculation or definitive answers out there ?

Does anyone have a screenshot of this?

Yep. Somebody posted a screenshot from 4K77 and he deleted it.

That’s what puzzles me. I wouldn’t think Marquand or Lucas would go out of their way to use step-printing for such a small sequence. And we know the footage was originally done for ESB because the meditation chamber set wasn’t rebuilt for ROTJ. So was the step-printing baked in during ESB for a deleted scene? And if so, what was it?

Something I saw on TFN and was motivated to post here:

As JW Rinzler’s Making of ROTJ book attests, the infamous deleted scene where Luke assembles his new lightsaber while Vader calls out to him with the Force was cobbled together in post-production, with Mark Hamill filmed standing in front of a bare-bones set and the footage of Vader being recycled from ESB.

But the latter footage has something unusual: it’s step-printed, with frames being duplicated to create a “dream-like” effect.

IIRC Irvin Kershner only used step-printing once in ESB: during the cave scene on Dagobah, where Luke confronts the vision of himself in Vader’s mask.

So where does the footage of Vader in his meditation chamber with step-printing come from? 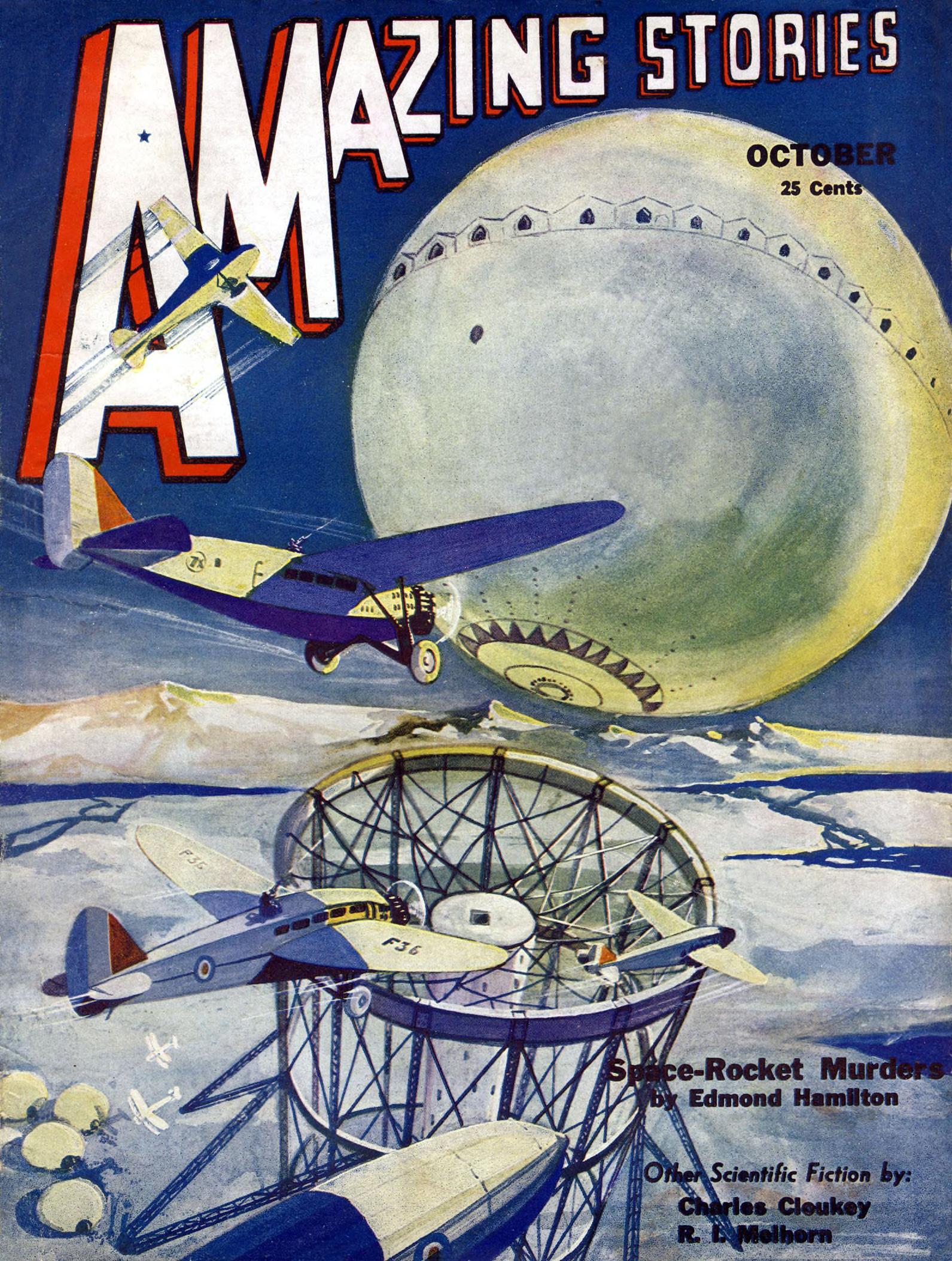 Well spotted! Of course, the cover title on later Amazing Stories issues (like this one from March 1941) was the inspiration for the Raiders logo…

Indeed. I think a large part of the blame for ROTJ’s issues has been put on Marquand precisely because he died so young only a few years after the film’s release.

It’s on iTunes and Amazon as an eBook IIRC.

Stewjon. If you go in the darkest corners of the EU, you find that it is the name of Obi-Wan’s home planet. And yes it’s canon.

This is what happens when a joke George Lucas makes when being interviewed by Jon Stewart gets treated as the official word of God.

And the last time Lucas had made a film in Tunisia - making Raiders there in 1980 - the entire crew got severe dysentery (save Spielberg who lived on cans of Spaghetti-O’s he’d had shipped from home).

I think TPM should’ve had Palpatine accompany the heroes back to Naboo, so he could get captured by the Trade Federation and rescued by Anakin somehow.

That would’ve explained why Palpatine had an excuse for doting on/grooming Anakin in the later prequels - and maybe given a reason for the Jedi Council’s sudden change of heart about training him, since he just saved the Supreme Chancellor-elect.

It also would’ve been interesting perhaps to see Palpatine in TPM like Marcus Brody in Last Crusade, bumbling around and getting captured. Then in the second prequel you could have him show an unexpected strength of character in responding forcefully to Separatist provocations - and then turn around in the third film and reveal that Evil Marcus Brody was the big bad all along.

All that’s designed to appeal to new viewers, mind you, not people who’d seen the OT (who might very well take umbrage at Comic Relief Obfuscating Palpatine in TPM).

The SE scenes of Vader taking his shuttle from Bespin to his Star Destroyer feature the Lambda-class shuttle from ROTJ, rather than the “inverted TIE bomber” shuttle Captain Needa is glimpsed using during one shot earlier in ESB.

I should also note that the “backwards” sword grip used by Ahsoka in TCW and Starkiller in The Force Unleashed game is something used by Zatoichi, the blind swordsman protagonist of a famous series of jidai-geki movies.

Normally real combatants would only use such a grip on occasion, as it increases grip strength at the expense of flexibility and range. It’s not something people would use all the time as a standard grip. But as a blind man Zatoichi probably uses it so the sword doesn’t get knocked out of his grip. Ahsoka has no excuse.

A big difference between the OT and the PT swordfights was the influence of Chinese wuxia martial arts films on the latter, I think. The PT fights also feature one-handed lightsaber fighting; during the OT the idea was that lightsabers were heavy like European broadswords and required two hands.

I’ve never much liked Lando’s ESB outfit. Capes are awesome, but the execution leaves something to be desired here. Quite a lot of the costumes in ESB are rather bland and unattractive IMO.

Same goes for Leia’s dress on Bespin. Some of Ralph McQuarrie’s designs for it are much better than what’s in the film.