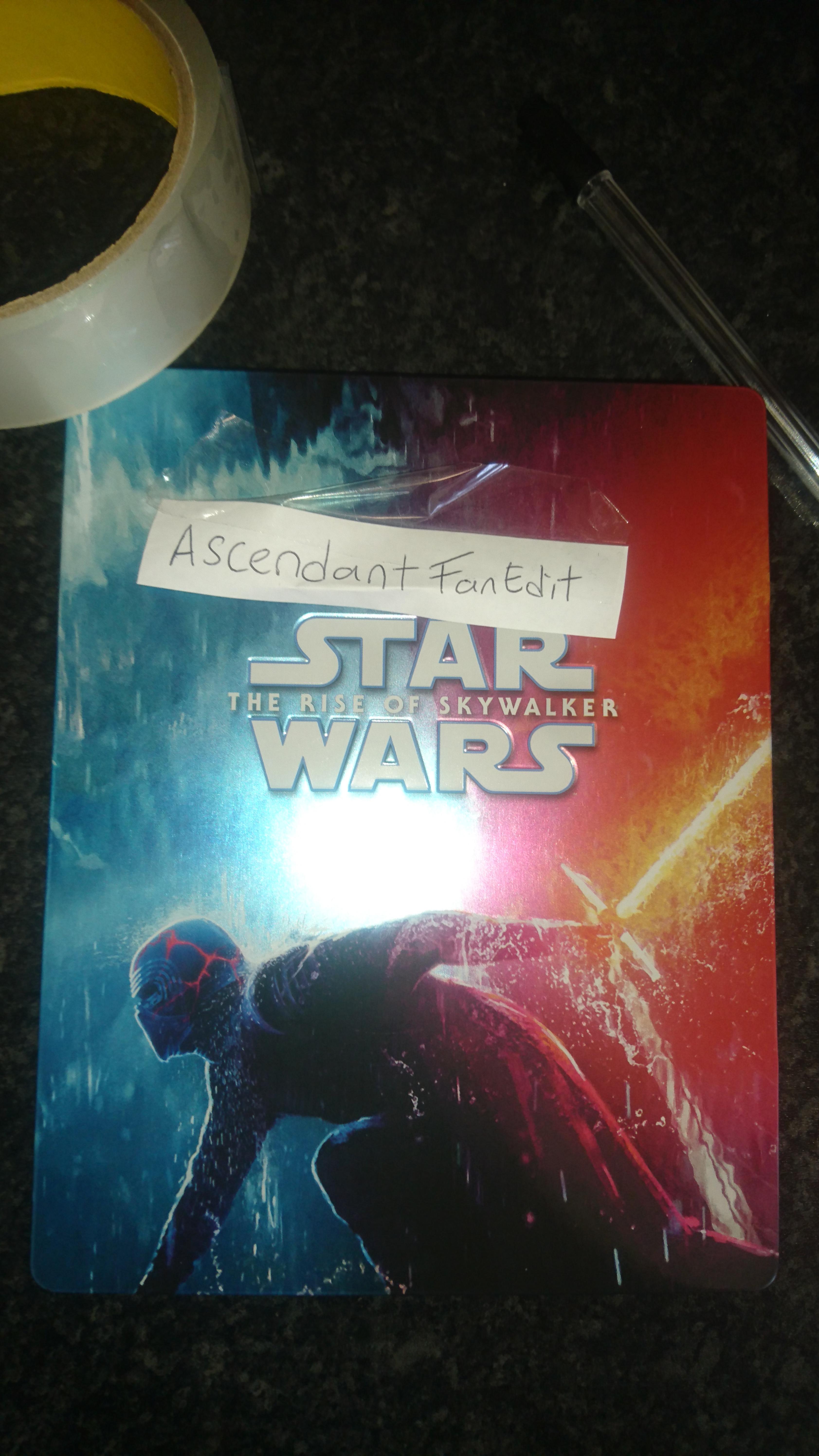 My professional steelbook cover of ROS: Ascendant is ready 😋

Thanks, sgroov90! Too bad I didn’t see your post until I got to this page. lol

Everyone so far should have a PM!

And that’s very nice, Muffy! Actually, that reminds me that at some point cover artwork will be needed. Ideally, in the style of TFA:R and TLJ:L. The others had Kylo Ren and Luke, so I guess Rey would be a natural fit for TROS:A.

On its way up now. Sending out a few PMs.

Please request PMs here, rather than PMing me, as whomever sees it first who has the link can respond!

I’d love to get a pm and check it out too, thanks for doing this!

And that’s very nice, Muffy! Actually, that reminds me that at some point cover artwork will be needed. Ideally, in the style of TFA:R and TLJ:L. The others had Kylo Ren and Luke, so I guess Rey would be a natural fit for TROS:A.

Okay so I expected some might not be on board with my first cover art so I have an altenative, It has Rey on it!.. 😉 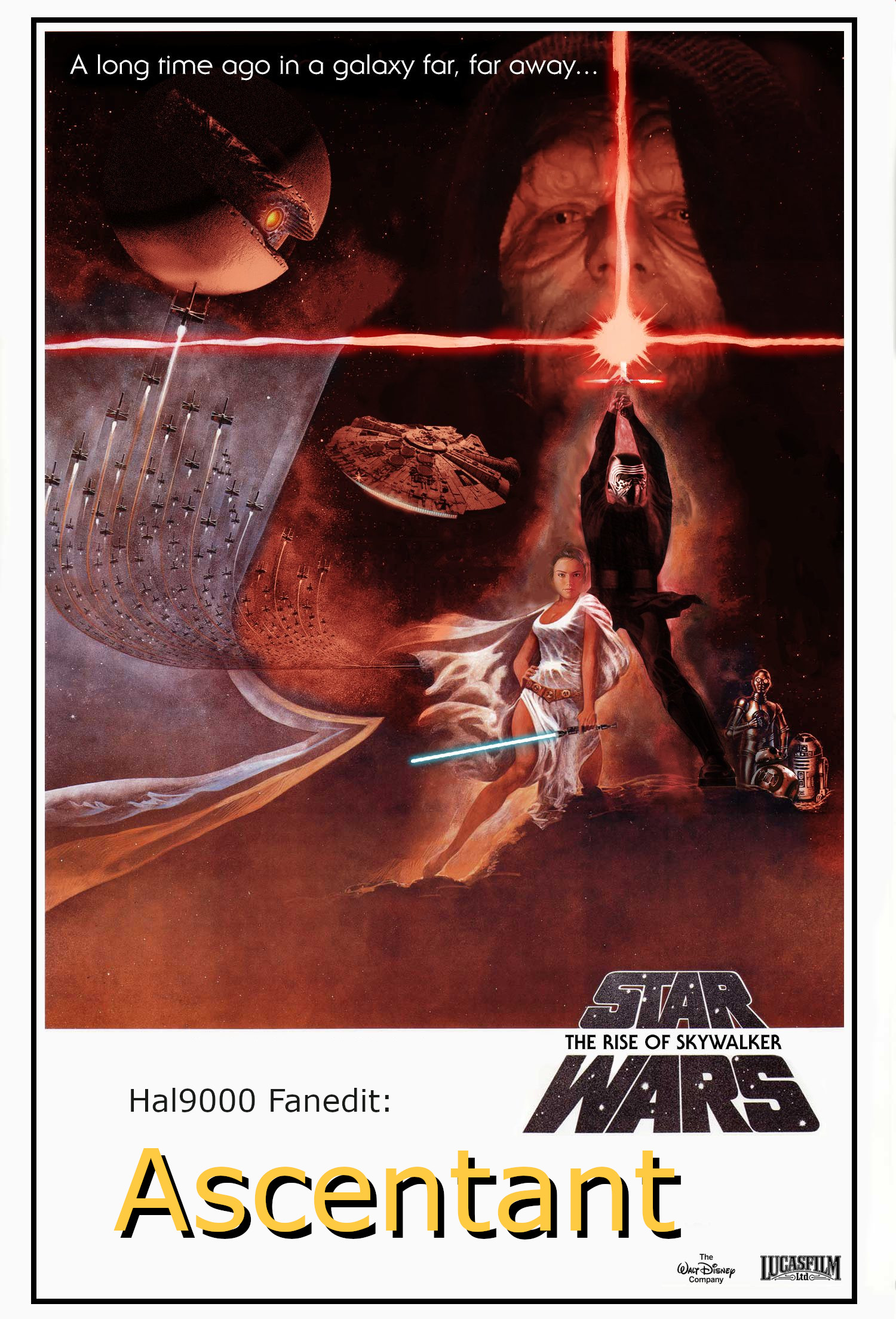 Okay and I think as of this post everyone should have a PM.

downloading it RN to take a look 😄

Would this image of Rey work? Maybe. I seem to remember, and maybe it was from TLJ artwork, a poster of Rey holding her saber up. That’d tie into the whole “rise” or “ascending” thing.

I was thinking this poster would fit more with the style of the other two, with some editing:

Downloading now and pumped! Thanks to Hal and everyone for their hard work!

I just downloaded the workprint. So excited to see this!

DLing, can’t wait to see the work done so far.

And I’d also like to say right now that I really appreciate you, Hal, for your edits and everyone else who’s contributed to this project for the hard work they’ve done to attempt to fix this film. Star Wars deserves a better ending than that final product and I have all confidence that this edit will improve to a satisfying degree.

I just finished watching though the workprint. A/V-wise, I found no noticeable issues.

Would love to see the workprint! Thank you.

Thanks for the PM Hal. I’ll watch as soon as I can download it…

Idk if Klaud was supposed to be removed completely or not, but he’s still in one shot during the beginning Falcon chase, falling over with his classic Awed-Klaud™ face

There will be color correction, but I didn’t do it for the workprint as it would have held it up and been a pain in the ass.

I would adore any good new shots of ships heading toward planets, lol.

Chewie’s roar as they head to the ice wall hasn’t been touched; it was like that.

I can try to remove “they fly now,” lol.

I don’t know about Finn. There will be some residual Force-implication for him regardless, so I’m inclined to leave his “secret” as is. Maybe something to chew on after leaving the theater.

I don’t plan to remove Kylo’s exploding TIE. I’d have to gut the whole sequence, and that won’t help the film’s pacing. These Force users just sort of routinely defy reality.

I like the yellow lightning, but I would probably only use it for a ‘Rey Nobody’ version to distance from Palpatine. But I’m open to feedback and it seems like more people feel weird than good about it.

That’s a good point about the heroes leaving Pasaana. If that ship can be seen leaving the planet and maybe entering hyperspace, that’d be cool.

Nice idea, i’ll play with quieting the music as Rey tells Finn about her vision.

I worry that if I remove the line “You are a Palpatine,” it might not be clear. He’s speaking through the helmet and can be hard to hear. I like the dialogue on paper better without the line, though.

The line “two were made” harkens back to Lando stating as much earlier in the movie. It doesn’t bother me, but I’m sure it could be removed easily if it bothers most people.

Idk if Klaud was supposed to be removed completely or not, but he’s still in one shot during the beginning Falcon chase, falling over with his classic Awed Klaud face

I’d like him to be removed. There’s a couple shots that would need FX. The shot of him falling over can just be edited out easily. Here’s the footage I’d need: https://drive.google.com/file/d/1u0x-OMfTBZ0dpnVflTzKSRjsxOp9uU6l/view?usp=sharing