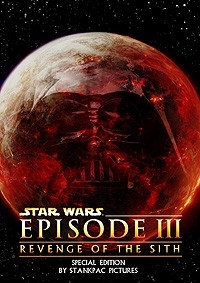 StankPacs edit of Revenge of the Sith Special Edition is more then 10 years old now but is still unmatched due to clever editing, the right amount of removal of silly CGI antics and reinstating of the much needed deleted scene “Seeds of the Rebellion” among others.

** On a side note: I noticed JasonN rotoscoped Dooku and Yoda’s lightsabers purple. I kept them the way they are. I do applaud him because when I saw that, I was thinking to myself how seamless that looked. Good job, but I feel entirely unnecessary. **

** On a side note: Some edits I’ve seen or read about cut out the Grievous talking to Palpatine scene (with a slight alteration as described above). I for one like this scene and find it to be significant. Basic storytelling tool – “Foreshadowing”. By removing the proceeding scene on the balcony & combining it with Anakin’s nightmare, it becomes quite apparent to the audience that when we finally get to the opera house that Palpatine, unbeknownst to Anakin, has been using the darkside of the force to peek into Anakin’s nightmares. That is crucial to the story and the over-all narrative. **

** On a side note: Now I’m not saying the Boga doesn’t squawk in this version because he does, but at least he does a lot less. The last time I recall, I think the Boga squawks roughly 18 to 20 times in the original theatrical version, not sure. Now I dwindled it down to about 8 times in this fan-edit. **

** On a side note: I know the security hologram scene is unavoidable because why would there be a recording of that? You just go with what’s available and edit it the best you can. I don’t mind a little bit of suspension of disbelief in movies and it definitely doesn’t disrupt the flow of the story. **

** On a side note: Anybody still concerned that there is no birth of the twins. There is quite a common medical procedure, whether the pregnant patient is awake or unconscious! (Hint: it starts with the letter “C”)**

Cut: Removed the dialogue of Padme telling Anakin that she is pregnant.

Cut: Removed Grievous landing on Utapau. As in previous cuts, instead of it transitioning to Grievous talking to the Emperor, I have decided to include it later in the film. Now it transitions into Anakin’s nightmare all the while still getting rid of the god awful balcony scene which for reasons I have already stated above in my previous versions.

Add: Added in the Grievous landing on Utapau after the deleted scene in the Chancellor’s office.

Cut: Restructured how Anakin finds out that Palpatine is a Sith Lord.

Add: Added Yoda’s exile to Dagobah as a post credits scene. The reason being is that I thought it was a nice compromise since I don’t have it in the actual edit per se, but to appease a few people that actually wanted to see it in the movie. A little inspiration of course goes out to the Marvel movies for having something at the very end.

Note: StankPacs not been active in the community for awhile so if you haven’t seen the edit PM me 😉

Can you please send me a link to this edit?

Hmmm. I’m confused; why exactly did you remove the Birth of Darth Vader scene?

Can you please send me a link to this edit?

Hmmm. I’m confused; why exactly did you remove the Birth of Darth Vader scene?

PM sent, also I didn’t make the edit, Stankpack does state hes removed Birth of Darth Vader scene in the change notes but what that means is he just cuts out the Frankenstein table Nooooo part of the scene, you now last see Anakin taking his first breath as Vader on the table.

I’ve been looking for this. May I please get a link? Thank you so much!

Forever in search of that one movie experience…

I’ve been looking for this. May I please get a link? Thank you so much!

Please send me a link. Thanks!

Please send me a link. Thanks!

I wonder if the Siege of Mandalore (What are Ahsoka and Rex up to), 2003’s Battle of Coruscant (how Palpatine faken his own kidnap by Greivous), Fallen Order (Cal’s Training and Order 66), Battlefront II’s 501st journal (Operation Knghtfall), Palpatine’s Day of the Sith speech at the beginning of the outer rim sieges, and Obi-Wan’s message from Rebeals would fit in there.

Due to this edit being over 10 years old now its only SD but having said that theres some charm in its lower video quality as it is the editing which makes the story shine through even without HD but it would still be nice to see this edit upscaled though. 😁

Hi Darth Muffy, Thanks again for sharing this edit with me. I really enjoyed the edit and agree it would be awesome if it were in HD.

Thanks again for sharing 😃