I recently bought a CD varient of this soundtrack unware that is the in fact a record verison. So I got excited and started searching the web for one. I finally found one on eBay but, I did some futher reasearch and apparently, there is a white label promo verison as well. So I got excited again and started looking for a white label promo (the difference between a white label and a regular record label is that a white label was made before the actual record was released to the public. It also (obviously)had a white label on the centre of the record where you would place the record on the player and it was a promotion copy (hence why its called a promo). So I eventually found one not realising that it was a previous auction that had ended on August 2015:(. So ever since I discovered the white label for this particular record, I havent stopped looking for it since and now Im tried. So basically, I need help. Does anyone own one and is willing to sell, does anyone know anyone who owns one and does anyone know if there is any other records shops online (Ive seen almost all of them)? Appreciate any help possible as this means a lot to me.

The following topics have been merged into this one:

Anyone have these records?

Are these the same as the records you asked about in here mate?:

If so, it would seem not.

Have you any images or pics of them? If these records are well old then it may help jog a few people’s memories?

Or any info on who released them, or other release info from Discogs or similar? Though this wasn’t always the case. A white label didn’t have to be a promo. For some countries like Argentina, it could have a standard lp face with words translating to “Not for sale. Promotional copy only” or something on the lines like that.

Standard Lp face (Promo) for Empire Strikes Back (Argentina): The words “Difussion prohibida su venta” are the words stating that it is a promo copy.

But it can also come down to the distributor. For Star Wars, there was a promo but it wasn’t a white label either. Standard Lp face (Promo) for Star Wars (USA): The words “Not for sale” mean it is a promotional copy.

RSO were generally known for making white label promo’s for the Star Wars soundtracks but in 1977, the rights for the Star Wars soundtracks were given to 20th Century Fox (As they were the a part of the production set for the movie) but weren’t particularly known for white labels (giving reason why there wasn’t one). Until 1980, when the rights were given to RSO. They made the Empire Strikes Back and Return of the Jedi soundtracks. But, according to https://www.discogs.com/John-Williams-Star-Wars-Return-Of-The-Jedi-The-Original-Motion-Picture-Soundtrack/master/55429, there is no documentation of a white label promo for Return of the Jedi. But some speculate that there is but you can never really be sure. Because the images provided (if provided) are from those who own the album because you can edit the database. I am a collector and I’ve trying to find these for years. Given why I have so much knowledge on this topic.

Oh right I see the difference, pretty interesting. Looks like they will be rare, and online searches for them on sale shows only things like Christmas in the Stars. No idea if any other members collect this sort of thing or happened to work for record stores or radio stations in the 70s.

Yeah. I search a specific title and the complete opposite comes up. Whenever I seem to find one on Discogs, the next day they’re gone. So its pretty frustrating considering how much time I spend trying to find one.

May the force be with you.

I actually found one last night. Not even joking. 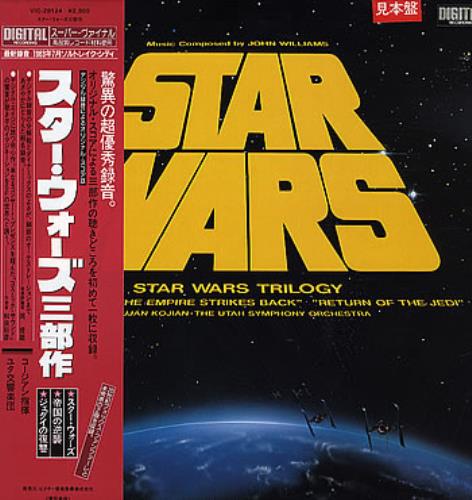 Months later, I finally have the record. But now now its stuck in Japan 😦

I’m sorry to hear that. I myself had to stop all buying of goods from Japan due to EMS to USA being almost permanently on hold due to Japan post being closed to us here. I have no idea when service will resume.

I just bought something from good squid via Kuroneko Yamato service.Not cheap mind you 48 dollars.

My other order with the owner of LDDB in Japan has been on hold since aug or so. It is just Japan though, had no problem whatsoever buying a game through playasia and Fedex express from Hong Kong.