One sequence in The Force Awakens, Escape from Jakku, was filmed in the IMAX format - on beautiful 70mm film with a very square (1.43) aspect ratio. The rest of the movie was shot in the standard 2.39 AR. When watched in a true IMAX theater, the picture “opened up” for this one sequence. This sequence was shot with the square AR in mind and takes advantage of it, as seen in the image below.

In non-IMAX theaters, the IMAX sequence was cropped 1.43 -> 2.39 so that the AR remains consistent throughout the film. Lucasfilm decided to use this version for the Blu-ray release. Typically when a movie contains IMAX scenes, they are cropped 1.43 -> 1.78 on the Blu-ray release to fill in the entirety of the TV screen. The Dark Knight is a good example of this. A consistent AR release is the version of the film that most people saw and is perfectly acceptable for the majority of people. However, there are others (including myself!) who prefer to see the film as close to its original intended presentation as possible. To see the effect of cropping on the picture, refer to this image: The goal of this project is to faithfully recreate the IMAX experience of The Force Awakens by inserting a 1.43 -> 1.78 crop of the IMAX sequence into the film while retaining the highest picture quality possible.

Luckily, a 1.43 -> 1.78 cropped IMAX sequence has been made available to the public. The Starz HDTV broadcast and stream of the film has been cropped throughout the entire film. Most of the film has been cropped 2.39 -> 1.78 and zoomed. This is a bad practice and has no use to this project. However, the IMAX sequence has instead been cropped 1.43 -> 1.78, and therefore contains more picture than any other home media release. Adywan has created a reconstruction of the sequence by overlaying Blu-ray footage (to retain quality) on top of an HDTV capture produced by PDB, so a huge thank you to both of them. The recreation has a few minor issues. First, in some shots, the color of the blu-ray source does not match the color from the HDTV source. This is only noticeable in some shots that have a clear blue sky. Second, a few shots contain minor pixelation from the HDTV source.

A second source is available, although its usefulness is debatable. It is a full capture of the Starz version of the film, but it is low quality. It may be useful for reference and perhaps masking pixelation.

As mentioned earlier, Ady’s recreation has just a few issues with color and pixelation. If Ady would be gracious enough to share the project, it would makes this project infinitely easier. I understand that he had to match the blu-ray footage to the HDTV source frame-by-frame, which is a huge pain.

Three shots from the IMAX sequence in the Starz broadcast have been identified as having been inexplicably cropped 2.39 -> 1.78 instead of 1.43 -> 1.78. Unfortunately, there isn’t a whole lot that can be done about this unless a new source for these shots with correct cropping becomes available. This would be the only inaccuracy of this project.

I need your help! While I will try to work on this project, I don’t have the skills to do it in a professional manner. I hope I don’t come off as begging for free work, but this board is full of people with amazing talent and I would be overjoyed if someone was willing to provide a guiding hand. Otherwise, I will take the time learn as much as I can and give it my best effort. I’ll update this thread if/when new developments occur. If you’re interested in helping out, please let me know!

I’m interested in helping. I’m working on a fan-edit of The Force Awakens and I would like to include the IMAX sequence in the best possible quality, so for that purpose I would do the things you’re looking for anyway. I don’t have adywan’s recreation though, I guess you have a copy?

I’d also be interested in helping!
Does anyone have the HDTV capture or Ady’s reconstruction?

Still nobody? I found a 720p version of what I assume is adywan’s version.

Guess I might have to ask adywan himself, but it would be convenient if someone (perhaps mapet318?) had a link.

I no longer have the original files or the recreation.

I have the final file, but I don’t think it would help this project.

I have the final file, but I don’t think it would help this project.

I’d be interested in a copy for myself, if possible. I’d like to reinstate the IMAX sequence in my edit of the film, and would be grateful for it.

I’d love them. I lack the skills to edit the scenes back in, but would love to see them.

I would love them please

I guess if someone has ultimately done this project.

If not, and there is still some interest, I could do it (thanks do Adywan that kindly donated the restored scene), along with color correction (using the DCP trailer as a loose color reference), and with a YAO hack that will cover the “exceeding” image on top and bottom of the IMAX scene, leaving the movie OAR for the VAR haters (sacrificing only those three brief cropped shots inside that IMAX scene).

By the way, I’ve discovered that the IMAX picture found here (http://media.washtimes.com.s3.amazonaws.com/media/image/2015/12/16/film_review-the_force_awakens.jpeg) - that is 1.33:1, by the way - has been recomposited (unless BD/HDTV were recomposited instead, but I don’t think it’s the case)

As you can see, Finn and part of the dust cloud behind him are the same, while the rest is different…

Also, I don’t know if I find the regrading necessary. In your comparison it looks like what you’ve done is make the overall color greener and brighter. The green is pretty nice and the brightness makes some shots “pop” a little more, but it also takes away details in bright areas, especially the skies look overexposed.

I’ve already completed a version of this project and shared with a couple people that asked. I didn’t color correct though. Have you gotten your YAO thing to actually work on real hardware?

Agree that regrade in not really necessary, as overall colors are usually good; and yes, in some shots are clipped; it’s a compromise to obtain more details on darkest shots, and get that “filmic look” that I like; also, get rid of the magenta blanket is a nice result IMHO.

@schorman13: haven’t the possibility to burn a BD-R, so can’t test it on an hardware player, even if it would be nice if someone could do it! What I can say is it seems to work on any widespread free software players, but only for scenes "YAO"ized up to 1 minute long (if longer, some skip one frame every minute), while others works perfectly for any lenght (namely, MPV and SVPlayer); I usually build YAO subs with 1s/2s long subs, so if one would like to go FFW/REW, the eventual part without subs is limited to 1s/2s max.

^…^ said:
By the way, I’ve discovered that the IMAX picture found here (http://media.washtimes.com.s3.amazonaws.com/media/image/2015/12/16/film_review-the_force_awakens.jpeg) - that is 1.33:1, by the way - has been recomposited (unless BD/HDTV were recomposited instead, but I don’t think it’s the case)

Wow, thats bizzare, i love finding little tidbits like this.

^…^ said:
By the way, I’ve discovered that the IMAX picture found here (http://media.washtimes.com.s3.amazonaws.com/media/image/2015/12/16/film_review-the_force_awakens.jpeg) - that is 1.33:1, by the way - has been recomposited (unless BD/HDTV were recomposited instead, but I don’t think it’s the case)

Yeah, the promotional still is a Photoshop of several different frames, so that you can have both Rey and Finn in good poses plus a good explosion, plus the tie fighter firing all in one image.

This is the frame Rey and the left half of the image are taken from (as you can see, Finn’s pose is not as dynamic and too blurry): 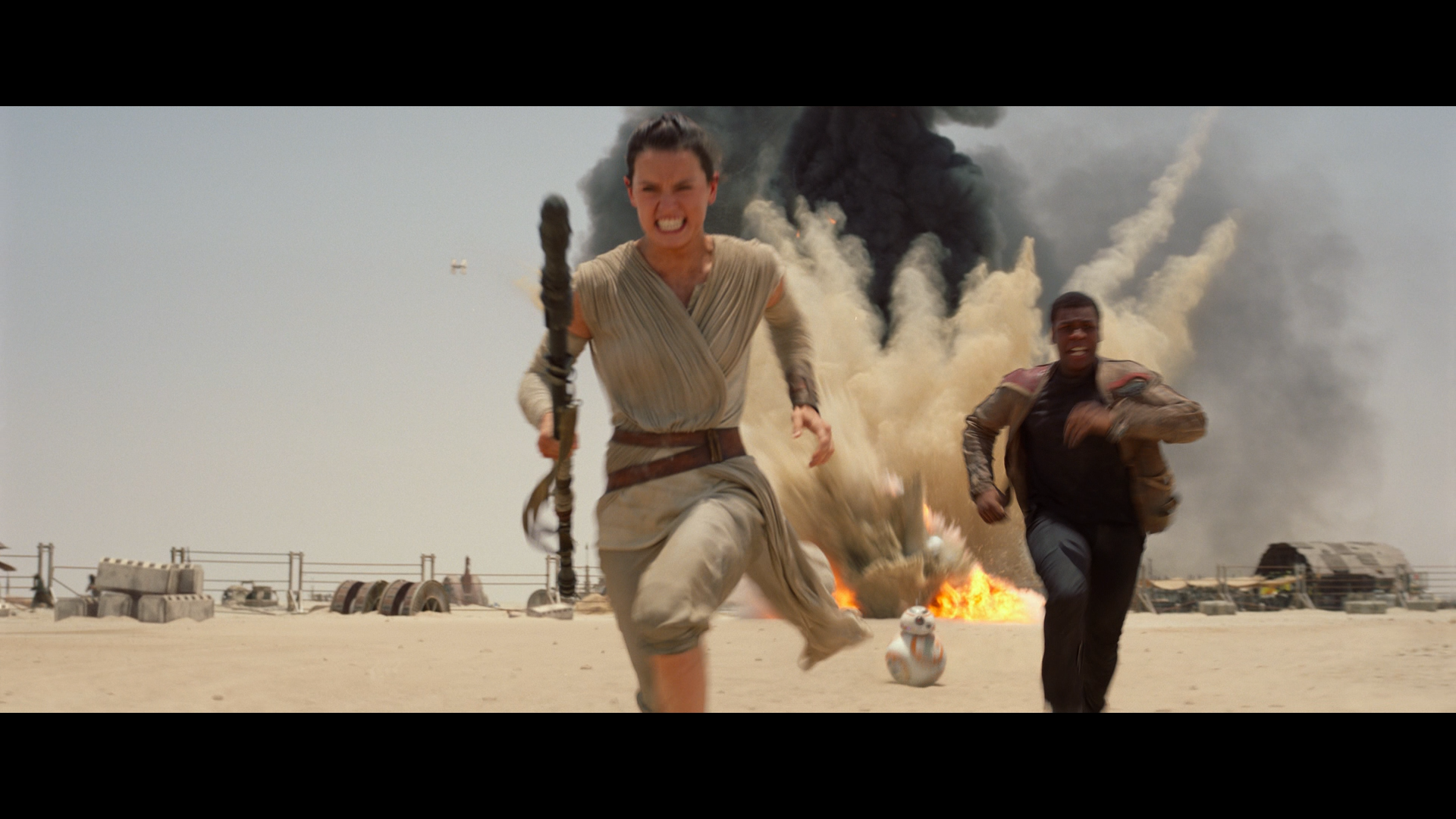 BB-8 and the tie fighter are from different frames as well.

Yeah, the promotional still is a Photoshop of several different frames, so that you can have both Rey and Finn in good poses plus a good explosion, plus the tie fighter firing all in one image.

Throw it up on the spleen.

Late, sure. Ganbatte, nonetheless. I know this is a lot of work. More than I myself am capable of. And I know such a feat wouldn’t even be feasible if it weren’t for the devoted efforts of this site’s remarkably talented frequenters collaborating and building off each other’s labors. Immense respect for all the contributors.

It’s been almost a year but I’d like them too, can you help me out ?
thx

i would take them too 😃

Does anyone still have either the original files or adywan’s composition kicking around that they could PM me a link to, please?