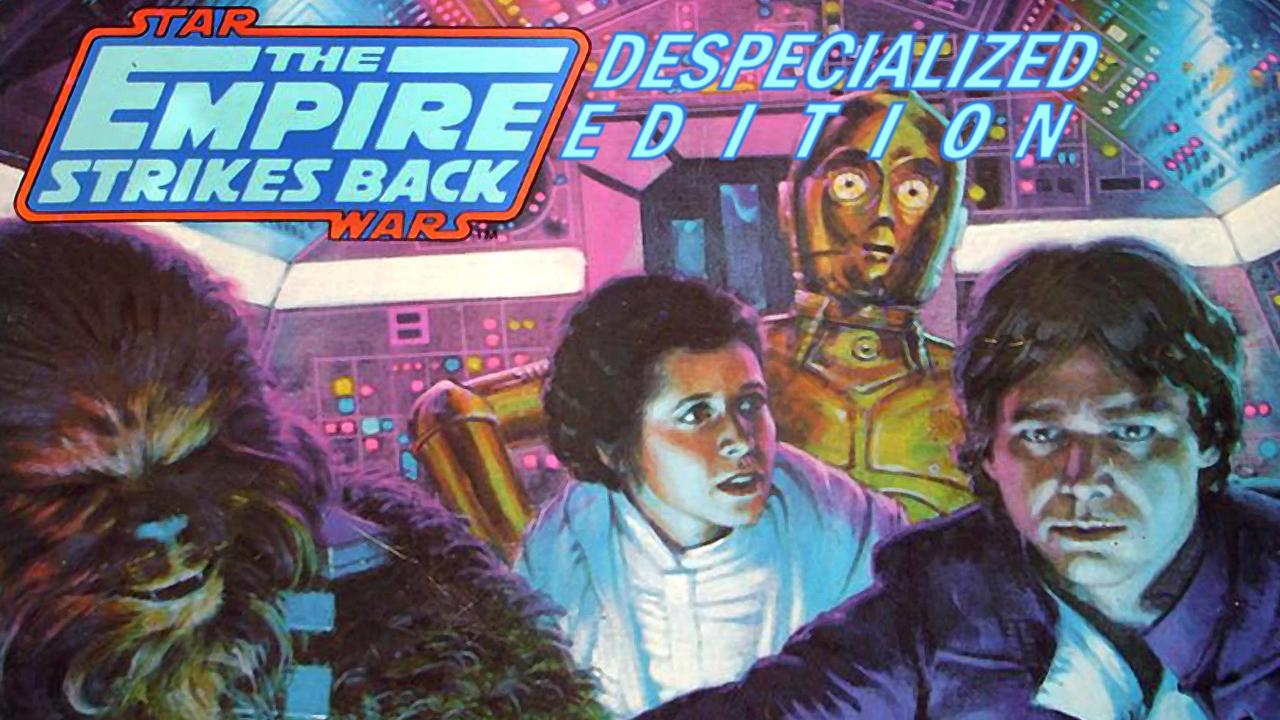 The Ultimate Introductory Guide - a particularly helpful guide by HanDuet; a ‘must read’ for anyone interested in the Despecialized Editions

This is a reconstruction of the 1980 theatrical version of The Empire Strikes Back. The original shots were painstakingly restored using various sources (listed below) and the film received an extensive shot by shot colour correction.

The remastered version (v2.0) represents a significant improvement in picture quality over the earlier 1.0 version due to the use of better encoding and higher quality sources and replacing many of the despecialized shots with higher quality ones.

A gallery showing all the changes can be found here:

The MKV version contains a large number of audio tracks, including the latest versions of the preservations of the original audio mixes in DTS-HD, three different commentary tracks, an isolated score and dubbing tracks in 13 different languages.

The AVCHD version contains the latest versions of the preservations of the original audio mixes, three different commentary tracks and an isolated score.

AUDIO: Special thanks to hairy_hen, Schorman, ABC, Puggo and Mavimao

Project Threepio is a collection of subtitles for the Star Wars Original
Unaltered Trilogy, synced to the GOUT (the 2006 DVD Bonus Disc) for
compatibility with many popular preservations.

AUDIO: (all Dolby Digital) Special thanks to hairy_hen, Schorman, Puggo and Mavimao

OK, since I’m now done with the ROTJ Reconstruction, I’m officially starting work on the PARTLY DESPECIALIZED EDITION v3.0 and since this project will be quite different from the previous versions, I decided to call it just DESPECIALIZED EDITION and start and new thread, in order to avoid confusion. I’ll be posting everything regarding the new versions here now.

I’m starting with TESB, since I can use Ady’s Theatrical Reconstruction as a source and won’t have to wait for DJ’s GOUT V3. And since Ady’s done such a great job on the reconstruction, it should also be the easiest and I’m gonna do most (and some more) of the changes that Ady did. But I’m gonna try to just use Ady’s reconstruction for rotoscoping with HD materials, so as to keep it as HD as possible.

I’m going to use the 14GB MKV of Ady’s ESB 97SE and higher bitrate versions of SW (I’m not using Ady’s AVCHD of SW this time) and ROTJ. V3.0 will be 720p DVD9 AVCHDs; I’m absolutely decided on that, I don’t want to make these Blu-Ray because I haven’t got access to a BD burner and the uploads would be painful too but I want it to be playable on BD players. 720p looks great - actually I’ve got a 6,5GB 720p version of AOTC and it looks way better than an 8GB 1080p version because the compression took away more detail on the 1080p than what was gained by the resolution. I’ll also be encoding HQ 2PASS this time to keep as much quality as possible. Noticing the loss of quality and detail in the previous PDE versions was actually the main reason that prompted me to make new versions, so I’ll try to make these the highest possible quality given the source materials.

Mod Edit: These two threads may also be of some interest and help for alternative possibilities in acquiring the Despecialized Editions - as well as for any technical assistance or ‘How do I do this?’ questions or issues:-

Some info & help for Harmy’s Despecialized Editions of the Original Trilogy… - in ‘General Assistance’.

Despecialized Editions by Harmy : Index of ‘How-To’s & Help’ Threads | Index of ‘General Despecialized Threads’ | ‘Where are they? And how do I get them?’ mega-merge thread… - in ‘How-To’s and Technical Discussions’.

The three main Despecialized Edition project threads on the OT•com - Star Wars : Empire Strikes Back : Return Of The Jedi

Fistpump? Is that something naughty? ;-)

And here's a new one:

Also, please check this and tell me what you think.

Harmy the clouds look very good and the window shot is even better , very impressive keep it up.

Loving these new clips. But Harmy, can I ask what was changed in the second clip from the previous PDE? It looks awesome though.

Looks great, I can't wait to get these.

can I ask what was changed in the second clip from the previous PDE?

In the previous PDE, it was just an upscale of Ady's reconstruction, in this one I rotoscoped the original background into the HD footage. Youtube compression is so bad that you probably couldn't tell the difference, so that's why I uploaded the mp4 instead.

It seems fine now, so probably just some temporary fluke :-)

That is really amazing. I need a tissue!!

It looked really good anyway, but I just wasn't sure. Now that you mention the changes, I have since compared and it's looking waaay better than before.

It seems fine now, so probably just some temporary fluke :-)

Thanks, but I need advice on which of the two versions in that clip to use:

OK, guys, I need your opinions, here's another little experiment:

It is the flyby clip. It is there twice- 1st is the latest version of the composited one and 2nd is the very same clip with a layer of Puggo Grande added to it. The point is that the 1st one is clean and HD at the beginning and at the end, but there is quite a jarring transition to the GOUT material, while the 2nd one is HD but looks kinda like as if it was an HD scan of an old 35mm print but the insertion of the GOUT isn't as jarring and we have to keep in mind that this particular shot would have been noisier even in the original negative due to multiple compositing. Let me know what you think.

I prefer the first version of the flyby. The second is too grainy in my opinion.

I prefer the details of the first, and the colours of the second. Sorry to be picky. :D

I think definitely the first version.

In this scene, I rotoscoped the original lightsabres and flashes (which were recomposited in the 2004 SE) back in.

Wow love all the clips, Harmy! Keep up the good work.