V2.3 is the latest version available at the usual place.

The 2160p UHD BluRay was used as the primary source for this project.
My DNR of 4k77 shots are used to restore original shots where needed. For many shots I
went back to the RAW anamorphic scan used to make 4K77. A shot from another Technicolor
print was used as well.
A few shots were provided by SkyDude for this project. Thank You.

v2.3 is now theatrically synced. We’re calling it ROUT synced for “Restored Original Unaltered Trilogy”.
v2.2 and prior were GOUT synced because I didn’t have complete audio to use.
4K83, D+80 and now D+77 are all fully theatrically synced, to view the complete theatrical experience. The 2006 DVD was a piece of crap in every way and as such is now depreciated.
GOUT is a bad arthritic condition that needed to be cured. 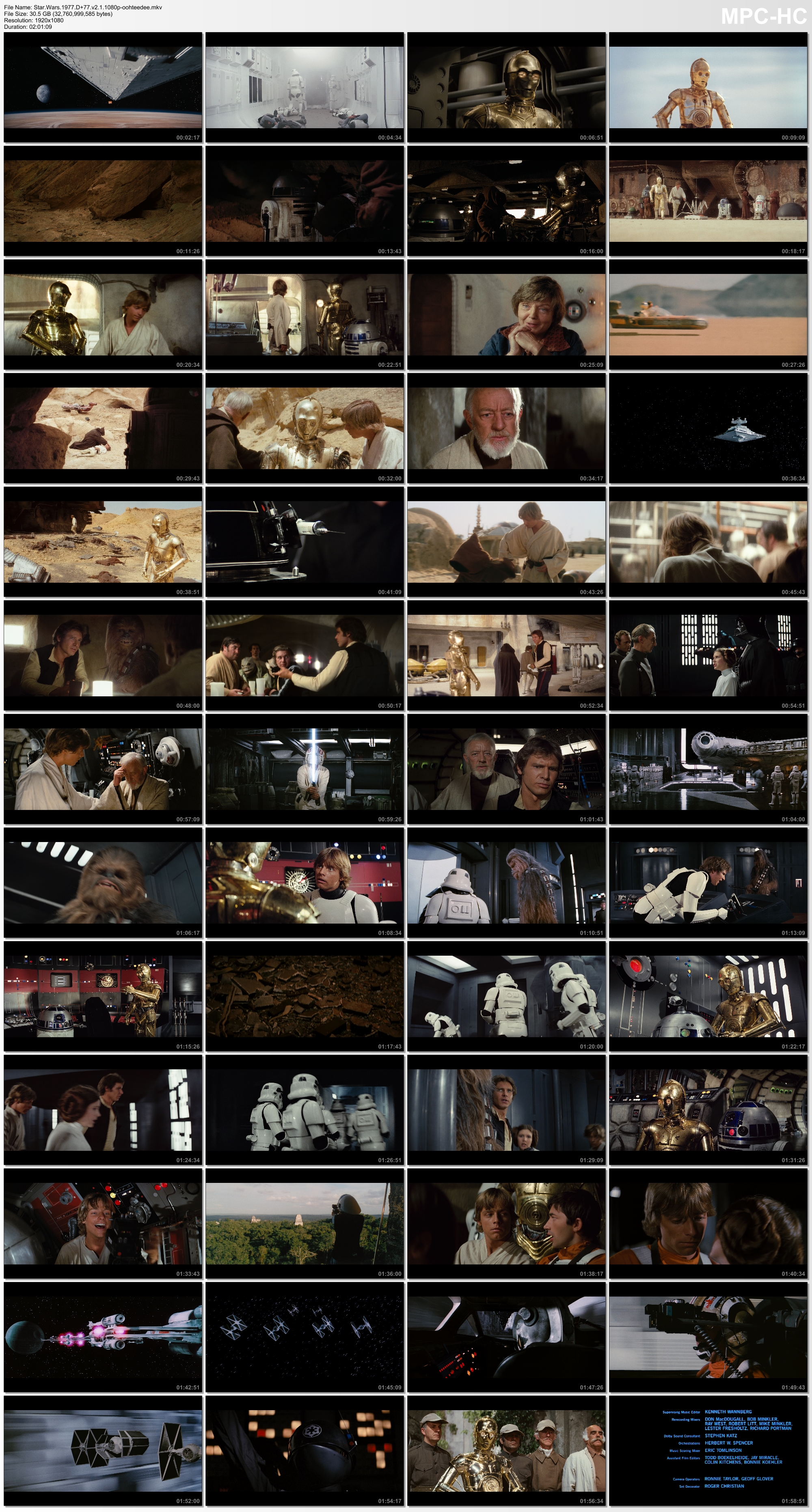 Do you happen to know who is working on the ROTJ D+ restoration? Or where I can follow that? I’d like to have the full set even though I already have and love 4K83.

Stotchy is working on it. It should be ready soon from what I hear.

Thanks! I’ll be keeping an eye out for it. And thanks to you for the great work you’ve done here!

This release is to improve the quality of many shots.

The Fox intro is redone to be a more theatrical colour graded. The source for this is an original Star Wars 35mm print.
The opening crawl has been redone and retimed to be more theatrically accurate. The starfield during the crawl is now repositioned more accurately. The timing of the tiltdown after it is theatrically timed now. In the SE it gets to the planet too quickly so the music queue was off.
The 3PO “over here, hey help, please help” shot is now UHD Blu-Ray which has a custom wipe to the 35mm Tech
print with R2 in the canyon. This is a huge improvement in quality.
The wipe to the “look sir droids” shot is cleaned up a bit.
The twin suns shot is replaced with the theatrical version.
Greedo hardcoded subs are redone to improve the quality.
The grate that Leia shoots to the trash compactor is theatrical now.
The ships taking off from Yavin shot is redone. Many ships where faint or missing.
The final wipe to the credits is cleaned up a bit.
White specks on the sides of the end credits are cleaned up.
Many other shots are better colour matched. I also fixed light leakage on the sides of many
shots.

D+77 has been updated to v2.3 to fix a few things I didn’t like in the previous version.

v2.3 changes
I stabilized the end of the tiltdown a bit just before the flyover. It was quite jittery. I didn’t completely stabilize it, I just reduced the jitteriness of it. There is still some jitter (gate-weave) left.
The restored shot of Artoo in the canyon has the colour tweaked. I felt it was too red and too dark compared to the shots right afterward. It’s a closer match now.
The shot of the entrance to the Cantina is digitally recomposited now to greatly improve the quality. It’s a little less theatrically accurate now without the purple patch in the middle but the overall quality is much higher.
The “doors locked” shot has been tweaked to fix what looked like light leakage in the scan.
The shot of the Falcon blasting out of Moss Eisley has been redone to improve the quality. It had some textural stability issues before.
The shot of the Falcon backing out of the Death Star has been redone.
The shot of the Rebel guy scanning the horizon on Yavin has been redone.
The PG end notification is redone to eliminate the warping it had.
I tweaked the colour of another shot a bit to better blend.

Lastly, this version is NOT GOUT synced. Version 2.3 presents the full theatrical sync
of the film. It restores the one frame missing from the NTSC GOUT DVD which was present
in the PAL GOUT DVD and of course the UHD BR.

I was hoping our audio experts would have theatrically synced these by now but it hasn’t
happened yet so I did it on my own the best I knew how with the tools I had.

DTS-MA versions of these tracks are in a separate folder for those who want lossless audio.
AC3 files were muxed into the file for maximum compatibility.

This is how I always wanted to present D+77, in it’s full theatrical sync.

I’m content with this version and don’t plan any updates for a while.

i don’t think there’s a post about OTD83 on this forum yet, but OTD83 exists and is out there as of september 5th

OTD83 was released on the other SW forum. It was posted to the spleen and I just looked and it is available on public trackers (not posted by me there). v1.2 is the latest version. I didn’t call it D+83 for a few reasons. I didn’t post it here because I didn’t feel like making a big deal about it. If anyone is interested in it you can search for OTD83.

edit:
The D+xx naming scheme was a mistake. The + sign doesn’t allow searching very well because the + sign is considered a special character for search engines. When searching for these D+ releases it’s best to search for my username oohteedee which is part of the file name and will return search results where as searching for D+xx may not.

Thanks for the info. I’ll hunt it down.

Hello, I’m jack. I’m a student living in USA. I am a expert in blogging and internet security in social networking

how do i get this version i could not find it on myspleen.
Edit: found

how do i get this version i could not find it on myspleen.

They are on there. Search for my name oohteedee instead of D+77. The D+xx name was a bad idea because the + (plus) sign is treated as a special character in search engines. I mention this 4 posts above BTW.

There are newer versions of 77 and 80 released at the beginning of this month on the other forum that have not been posted on the spleen yet though. They are colour tweaked versions. They may make it there eventually.

I wanted to say thank you to oohteedee. Finally the OT in 4k that will be my only versions until I pass on. Thank you so very much. I went to see Star Wars in '77 at my local drive-in. I was 9 years old. There was one crappy mono speaker that hung in the window and my Dad didn’t think to wash the car prior so the front windshield was dirty…but it didn’t matter. I remember everything about that night.

This looks wonderful! I’d love a link whenever anyone gets the chance.