Perhaps there was an exception for Jedi after much time passed where it was the only one without an MKV release? I didn’t think so, though.

The actual 1.0 releases were avchd. I’m sure many people made mkvs, which is easily done without reencoding. That’s how I watched them. But if you’re preserving the avchd, you’re preserving the originally released audio and video streams. You can remux them if you want, but probably don’t need to download someone else’s file and worry about if they re encoded anything.

I hope this won’t be taken the wrong way, but do you think once a reel is done or the film is done, you will probably be fine tuning shots anyway for consistency? I think these early shots have been 99% there for a very long time, and you’re fighting the good fight for utter perfection. But if you’re likely to revisit them and work on that last 1% in the end anyway, would it make sense to do the preliminary grades of other portions before this very-ultra-fine-tuning continues?

Not complaining, of course. 😃 I think of the dozens of samples you’ve shared in the last month or two, only one or two settings might have been slightly less than suitable to proceed with. I’d happily watch any of them, and perhaps I’m just a bit too eager to see what you do with portions of the film I’m not sure I’ve seen you work on much.

(could have posted this in the 4k77 thread as well -they’re both looking great.)

I’m curious to give it a look since I do have the original theatrical cuts of the original trilogy (the Despecialized Editions) and Episode I. In fact, I do wish somebody would do an HD version of the theatrical release. And I’ll gladly try to do one for Episode III (if somebody can provide the sources).

I believe Schorman has released one for III (a relatively simpler project).

The footage needed for AoTC isn’t available in HD, or even SD, or anything better than this cam source here. Someone would need to buy and scan a print. A lot of money for a project that most of us probably only see as something that belongs on a checklist, and not something actually meaningful to us.

If the urge to watch this movie ever strikes, I’ll live with the deleted speeder. 😃

Yeah. No need for him to do it twice if much better scans are coming at some point, and there are other things that can be worked on immediately.

Yes, MEGA still forces 3-6 hours (depending on what you use, I believe) of downtime after every 5 GB for non-premium users. For a three hour wait for the UHD version that’s roughly 30 hours of downtime. MegaDownloader supposedly bypasses this, but I haven’t been able to get it to work.

VPN or Proxies with Jdownloader2 or MegaDownloader

Yeah. They don’t seem to be putting up too much of a fight against VPNs. You can use their official app, logged in with your non-premium account, and switch your IP every 5 GB, and it will resume download.

And NO I’m not wasting expensive BD50 and I’m not using right now. I am using BD-RE DL which is rewritable disk (if I mentioned in this message). I can erase the disk by using “Nero Smart” and reuse the disk. Works for me.

Ah, that’s good then. Mounting it is still a very fast way to check.

If not, I’d recommend just giving it a try and see how it goes. If you run into problems, ask for help with the specific problems.

Importantly - when you get your finished disc image, just mount it in your OS and see if everything works properly. Don’t waste expensive BD50s until you have it right. That’s always a good idea when you’re creating new images instead of burning something others have already tested.

I don’t really have time to describe a tutorial, but it’s very straight forward. Drag and drop your video files in order.

If they are red, on the list, the program re encodes them. If not, they’re fine as is. There are some other options, but it’s straight forward.

If I’m not mistaken, tsmuxer doesn’t work for sequential videos. It may even be mixing multiple video streams into one file. So, you’re playing through the film’s length while stuck on video track 1. You might even be able to switch to the feature’s audio.

Use MultiAVCHD. Its made for this and will convert that audio that wasn’t compatible.

Is the omnibus an all new edit or a remastering? I seem to recall there being one before. My local PBS station would run an entire story in one afternoon when I was a kid.

And thanks for the heads up! Hopefully this won’t be scuttled for a technical snafu like the screening of the animated Power Of The Daleks I attended.

I didn’t make it to a screening, but I heard a number of them did have technical issues.

Anyway, the US set is shipping, now about $49. The UK one got delayed until July 2, apparently due to packaging manufacturing.

Although Poita’s new print is surely a ways off from being scanned and available, I think it would make sense to hold back a bit on this one. Especially with 4k77 available as a source to improve SW.

Pay particular attention to where the lightsaber blade meets the handle. The rotoscoping has been changed. I used Dr. Dre’s tool to colour-match the scan to the PAL broadcast, all screenshots are taken in AvsPmod (resize to 1080p) and are frame-accurate.

This was a previously unknown change. Everyone knew that the 1997 SE has done some new rotoscoping - but not that there two different versions done in 1997 - one that appears on home video and broadcast, and one that appears on the release prints. I could post some more screenshots if poita gives the OK, but these screenshots show the difference in rotoscoping quite clearly as it is. This is very exciting and shows there is still more to discover about the 1997 SE that has remained unknown to this date that poita’s scans are going to help uncover!!

Could you highlight the exact spot you’re comparing? Maybe I’m just not seeing it, but I’m not entirely convinced of a rotoscoping change.

It brings to mind the look of the first good quality film scans we got of the OOT version of this shot, and how they looked compared to the hazily defined blade in the GOUT. That almost looked like alternate rotoscoping as well (more so, even).

But again, I may just not be seeing what you mean to point out. 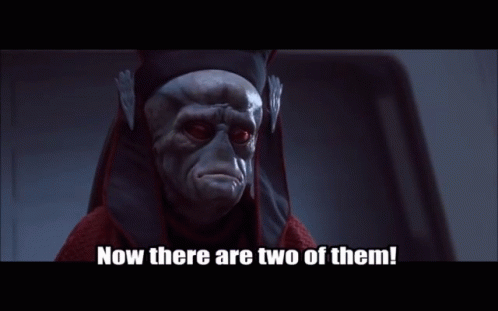 Hello everybody, I just found out about Harmy’s Star Wars DE through a video on YT, so I’m a total noob at this. I have a comment and a question;

I downloaded the HARMY DEED IV MANUAL through a Download Manager app on my iPhone (took about 15 hrs to do so through ULOZ). Now that I have it saved on my iPhone, it keeps asking for a password in order to “extract files”. I typed “harmy” and it started extracting the files. But then it just asks for the password again without being able to view the movie. My question is, has anyone successfully downloaded the movie through an app on their phones and been able to view the movie? Or am I better off doing it through a computer?

I don’t have an answer for you about your phone (I don’t know if you managed to get the whole movie, if you have space to extract it, if it even extracted to a file, if you have the means to play it back, etc). But yes, you should use a computer. If you did manage to download all of the parts, just transfer them over to a computer to extract them. You can worry about trying to play back the file on a phone later, but you might need or want to convert it first.

It’s hard to say what is wrong. It could be that Premiere isn’t doing an adequate, smooth job of moving your png, or that something is wrong with the render. It could be that the rendered file/container’s frame rate flag isn’t being picked up by your playback software and your display isn’t switching to 24hz, while it does so correctly with the source video.

It’s understandable. We are all, after all, extremely aware of the unfortunate course of events this film would eventually go through.

Wonderful news in just about every possible way. Very glad that it seems your hard work will pay off even in ways that extend well beyond Star Wars.

any chance of someone making an “a new hope” crawl for this?

Just a reminder of the absolutely unsnooty comment that started this.

It looks like I finally deleted the mega link. Maybe ask in the despecialized thread, as a number of people here grabbed it.

Except that the revised crawl first appeared in theaters in 1981, so it’s still a theatrical preservation.

This is a 1977 theatrical preservation. It’s not 4k81 or 4k97 or any other revisionist versions.

This seems a bit over the top. No, it shouldnt have said A New Hope in the main release, but pretty much everyone who enjoyed the film on any home media release, before things started actually getting batshit in 1997, has memories of it that way.

It seems like the main thing going against it is what faithwyn suggested, where it reminds people of the later, terrible changes that would be made. But that sounds like a personal issue, and a side release wouldn’t affect anyone that doesn’t download it. After I did an optional ANH version of Despecialized 2.6, I made sure it was only done for 2.7 in secret, by PM, because of people getting irrationally angry about it. 😃

Agreed, completely. Trying for a little revisionism is like trying to get a little pregnant

That’s a cute thing to say and all, but not really a working analogy in any way. 😃

Wait, I am a bit confused Dre. Sorry in advance for the dumb question.

I thought that your regraded 4k77 and Blu-Ray (btw I like the green cast as well), would be shot by shot and that is why it would take more than 6 months to complete. But it’s just a single set of adjustments with a LUT that you will release?

Okay, and I’m assuming you’ll just release a high bitrate video of it rather than thousands of LUT’s for people to apply.

Or at least a Premiere or Resolve project with the shots chopped up and LUTs applied. 😃

For many of us, it doesn’t even let you complete the transaction if you decide to cough up the 25%. I’ve paid him before, so this is something new with PayPal.

Happy to donate a bit again, but I’m going to see if the situation clears up at all.

I’m currently working my way through the Jurassic Park 4k set. The original film looks stunning. The second one looks pretty good too. There’s a massive drop off in quality with the third one though, it looks worse than a lot of 1080p blu-rays I’ve seen. Haven’t watched Jurassic World yet, but it’s a recent enough movie that I’d assume it’s original master would yield a fine UHD disc.

The third one was basically a direct-to-video kind of movie that ended up in a theater anyway, right? No one really seems to care about it.

No one cares about it because it was a mediocre movie and unlike the first two, lacked Spielberg as a director, any loose connection to a Crichton book, John Williams as composer, etc. But it was still a big Hollywood movie, with a larger budget than the first two, and decent box office success.

But yes, I was disappointed when I saw it in the theater.