This sounds intriguing. Looking forward to it.

link request dropped into you DM box. Your work is much appreciated.

When Summer Lovers (Daryl Hannah, Peter Gallagher and Valerie Quennessen) went to DVD
Valerie Quennessen’s scene of her laying naked in the sun on her villa wall was cut and replaced with a view out to sea. The VHS version was uncut.

Looking Forward to this.

Doesn’t seem to be a lot of interest in this project which is a shame because this is a fantastic film.

So far about 1/3 of the way through a frame by frame scale. Results are surprisingly impressive given the source material.

Hang in there FXM will most likely show it again. I have been capturing a lot of FXM stuff, but I do not have the ability to capture in HD. The best I can do is a Copy to a DVD recorder in SD using the HD source.

I will donate , tell me How.

Thanks for posting these… Interesting stuff.

I think it is also interesting Jackie and Victor are Dominguez and Serrano too.

Is that line missing subtitles in the BluRay? Or is it just to show colors and fonts? Sorry can not remember…

Cool so i was not far off with my color regrade guess so i pushed it sort of the right way. I wonder if that frame grab of the bridge will go like the poster images with more yellow at the top end…

Sorry to harp on about the spanish language track but i can’t even remember if the helicopter ride was in english or not originally? And if this is dubbed into English / German?

And the looted shack also… 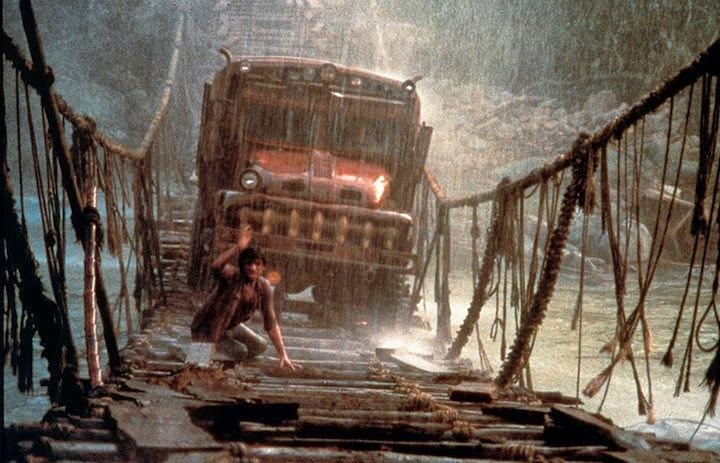 Actually the top image is closer to the theatrical print. The scene’s colors were muted and that was the intent as it was supposed to be a dark stormy day. It was to convey a Mood like they were on a doomed quest. That’s how it was in the Theater.

Having seen the theatrical release in the theaters I must say that this film got a bad rap. It did not do well in the US and I venture to say it was because of the Title.

Friedkin had just come off of the success of the Exorcist which was a groundbreaking scary film. It scared the crap out of the audience at the time. So when the people heard about his new film, Sorcerer, everyone was expecting more of the scary stuff. Thinking that this was going to be like the Exorcist early theater goers were seriously bummed and word of mouth soon spread and this movie sank like the titanic.

Being the Film buff that I was, I had read up on everything I could find about this movie before it’s release and I knew what it was going in. The trailer with Tangerine dream’s soundtrack hooked me and I couldn’t wait to see it. I have to say it didn’t quite live up to my expectations but by no means was this a bad Film. Friedkin is a very Talented director and the visual imagery is unforgettable. Well worth viewing

Pardon me, I have been asleep for a while. What is the “Squeeze edition” and how will I know it when I see it?

Is this still available anywhere?

It was taken down. I can try to re-up it and hide the name or something

I am Interested in this also. It is a shame that it won’t be shared

If the link is still available may I have it?

I have no idea (and neither does anyone I know of-even in the Bond community) as to the origin of the alternate audio but my guess would be a test 70mm mix or perhaps differences between UK and US audio mixes on the original release.

As a Pre teen and teenager I had seen the 1 st 3 of the Connery Bond movies during their original runs at the Theater. I seriously doubt that Dr. No had a 70mm mix. The Theater I saw the 1st 3 movies had 70 MM capabilities. I Saw Exoudus in 70MM there. I doubt DN had even tested any 70mm footage as that films budget was very tight. It was never expected to be a big film. They Milked that movie for all it was worth by the time Goldfinger had come out. The theaters in America had routinely run DN & FRWL Saturday Matinee double features. They even showed them during the kids matinee in my town, 6 RC cola bottle caps would get you in. This was before the rating systems.
Just my 2 cents worth.

It has been a while since I have visited here. I contributed to the 1st Alien Appendix and I will be happy to lend a hand. I still have some of my source material but unfortunately I lost a lot of it through the 3 moves back and forth to and from the coasts.
One of the things I lost was the Laserdisc Boxed set of Alien. I remembered the supplemental information was endless. The Drawings, Photos and text that were included were fascinating and I have been trying to find a replacement for a while. Unfortunately the area I live in now, never had a lot of laserdisc fans so slim pickings here.

Some of the stuff that was on those Appendix disc was really poor quality that came from VHS recordings from broadcast TV (I know since I contributed it) so if it gets included on the updated discs, It is not going to look good on the new HD and UHD sets how ever you encode it.

Funny I just 2 nights ago watched the new 40th anniversary 4k disc and I agree the detail is amazing It almost like watching it at the theater for the 1st time.

Any way I just wanted to drop in and say Hi.

poita said:
I first noticed the patchwork background of the front projection screen when viewing the film in 70mm, I haven’t seen the blu-ray, but I notice it every time in the cinema.

American Cinematographer: Front Projection for 2001: A Space Odyssey, by Herb A. Lightman wrote:

The surfacing material used for the giant screen was a special 3M fabric coated with very tiny mirrored beads of glass. … This special lenticular 3M material comes in rolls and an effort was made to surface the screen by mounting it in 100-foot strips. However, because of a slight variation in reflectivity between rolls, seams were frequently visible under projected light. An attempt to match strips exactly proved unsuccessful, so the material was finally torn into small, jagged, irregular shapes which were mounted in a “camouflage” mosaic, shape on top of shape, so that there was no longer any visible variation in reflectivity.

Would this suggest that the contrast of the prints was not high enough for the brightness to further obscure those pieces, as they saw it?

I saw 2001 in the summer of '68 in Cinerama during its original theatrical run. I remember seeing the seams and to my eye the print had plenty of contrast. It was one of the most memorable events in my life. I had just turned 16 and had just received my Adult Drivers License after two years of a learners permit. It was my first date with who became my first steady girlfriend. So the memory is engraved in my brain.

Looking for this edit, any help out there on where I can find it.

I’m also interested in a link to the uncensored Version of WFRR. Would really like to see the 25 gb mkv version in english…

Go to (What is the color the Sky)-torrents dot (what a basketball goes through that is attached to the hoop)
it is there you will find what you seek.

FYI speaking of cable companies re-encoding. DirecTV transmits in mpeg-4 on the HD channels and will do 1080p on some.

I have searched High and Low but I do not find it. any clue to where it is?

Interesting point Capt Solo. I saw The Empire Strikes Back in 70MM with Dolby Surround and I was hooked on Dolby Surround. ESB had a great surround track. Unfortunately In Central West Florida at the time the bigger Theaters were having to compete with the then new concept of multiplexes and I had to travel 70 miles From the Tampa Bay Area to Orlando to see it in 70 MM because there were no 70 mm venues left in Tampa,St. Petersburg Clearwater area. The Last one,the Britton Theater, on South Dale Mabry Hwy had converted to a Multiplex to compete with the AMC multiplex that had opened directly behind it. It was and is sad to see the Britton Theater still standing today as a multiplex. Before it was converted the theater built in 1958 could hold 1800 people. Can you Image 1800 people at one screening? That was what is what is was like at ESB as it was a big theater. But I digress.

When you say you have the 4k version I am assuming that you have the Blu Ray version that was taken from a 4k print and not an actual 4k digital rip. I bought the recent Blu Ray release of Mad Max Fury Road it came with the UltraViolet digital copy accessed through VUDU. Then in VUDU I see if I pay another $24.99 I can stream it in 4K. I was not to happy about paying another 25 bucks to see it 4K. I Back to GB if they release it in 4K would you buy it again?

Wow I have only seen the Cinerama print on the original run.

I would be very leery of this content. A lot of this footage has been edited and modified in the last 30 to 40 years. With the advent of home video recording in the early 1980’s I have noticed that there is a revisionist history of sorts.
The easiest example I can point to is the footage of the casket being unloaded from Air Force One at the return to Washington DC. Original footage showed that as the casket is being unloaded there was a helicopter taking off behind Air force One. I saw it many times and there is a photo of that scene either in David Lifton’s Book Best evidence or Bonar Menninger’s book Mortal Error. Last year I saw the the CBS rebroadcasts as they were being replayed on various cable and satellite channels and I was surprised to see that the helicopter was no longer in the shot. Now I being old enough to have seen the original broadcasts and many rebroadcast in the 60’s 70’s and early 1980’s , I know that that Helicopter was there. Now it’s like it never existed. Why is it gone? Because some conspiracy theorists claim that JFK’s body was in body bag and on that Helicopter and not in the casket. What gives the theory credence was recorded time of JFK’s autopsy at Bethesda Naval Hospital as noted by two FBI agents present. The agents present recorded the time in their note and The Autopsy was started before the casket had arrived at Bethesda. Just one of many odd things about that day that never added up.

I showed my wife the photos of your "moving day" and said "See, it could be worse"