I think the ordering you presented is brilliant, especially with the balancing of character development and the thought you’ve given to Ahsoka’s arcs and how each one shows different aspects of her character. I do think the idea that certain Domino Squad arcs could be used as flashbacks could work well, provided the pacing still works. Really excited about all the ordering and where things lie currently!

I would be interested how it would feel to swap Grievous with Trench at the very least on a concept scale. Since Grievous wouldn’t be in the episode, it adds menace and keeps him in the shadows, which would emphasize his later appearances more. With Grievous and Dooku, I think less screen time for them in general heightens tension and makes them feel less fallible or beatable.

For the closing, I’m going to redo the credits over imagery from each episode’s episode gallery / BTS gallery on StarWars.com. This’ll be much more like Mandalorian, which has those lovely bits of art. 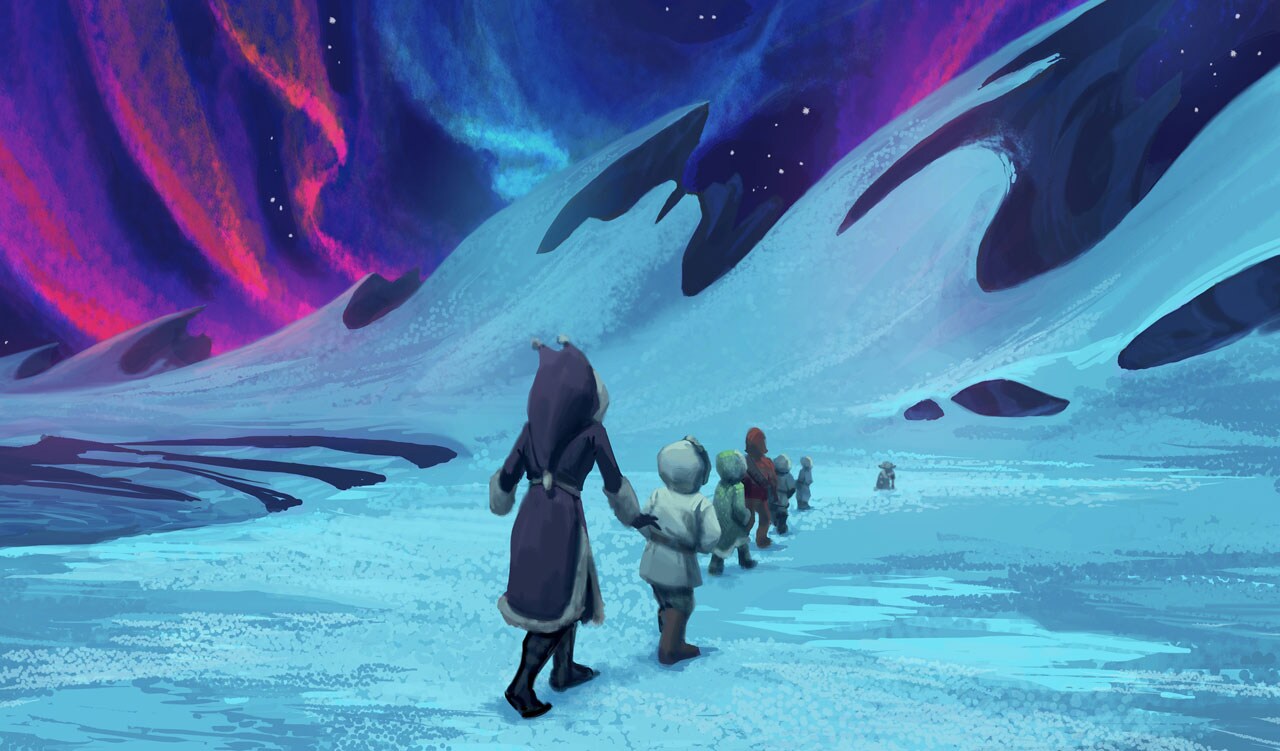 This will be over particularly dark, ponderous music - I want us to take a beat after each episode and really digest it. I think the best track for this might be the prelude to Order 66 music which slowly builds throughout the third episode of the final arc. This would serve us nicely because it’s dark and ominous - welcome since we know the inevitable conclusion of the Clone Wars and mentally it draws us toward that end…

I’m a big big fan of this, music is the way I connect to tv shows and movies, especially Star Wars. Having that subtle change in the intro and outro for each episode would help to maintain the darker atmosphere provided by the inevitability of ROTS and Order 66. I don’t know if you’re asking for suggestions on tracks to use, but there were a couple I found that might fit! They sound similar to the one you posted in terms of something more low key and emotional:

One other thing I’ve been thinking is that, once I’ve properly got going with this, I can probably output at least one edit a week (since I have a good amount of available time, and some episodes won’t require much at all, and some will be untouched [but placed in a recommended order] so I can kind of queue them up) - what do you all think about doing ‘Clone Wars Wednesdays’ where I’ll release one every Wednesday? That way we can all watch and feedback, and it’s both a small weekly commitment where feedback can be given in a focused way, plus a simulated weekly release cycle so helps us to judge the pacing of the show as a whole? It’d help me pace myself too, and keep the momentum up.

I’m a big fan of this idea, it reminds me of when new episodes would come out weekly. Also, it would build that same excitement. In terms of your categorizations, I don’t have any objections so far; they all seem reasonable and necessary to trim the bits that aren’t as important.

*Edit
I just caught up on the rest of the posts, and I agree with Maul being the persistent underlying threat throughout the series. The fact that the end of the series climaxes with Maul and Ahsoka supports that the series’ main focus is on those two more than others. Just my opinion. I also love the idea of a cold open for episodes as well.

One other thing I might end up doing is just adding a couple of tags to the episodes, for people who want to maybe watch a more trimmed version of the show. I’d probably use two main tags: VITAL would represent something unskippable if you want context outside of TCW, and SKIPPABLE would represent those retained but just not necessary for any broader context, and not particularly good. Those without either of those tags would be optional depending on how much you wanted to commit to. A final tag - GREAT - might represent those episodes which aren’t vital to the wider SW story or universe, but which are still just danged good.

I’m super interested in this idea, that way it’s easy for people to watch who just want the essential stuff or if people want to experience the show in a format with little filler. This looks like a great idea, best of luck to you! I’m excited to see how this turns out!

Poppasketti, I watched your edit and I was blown away with how much the little tweaks you made changed the film to lead up to TROS! I think one of my favorite edits you made was cutting out the Leia space scene, with it just cutting to her being on the stretcher. That worked so well, it felt like that what the movie should have been like. The Palpatine laugh in the flashback with Ben and Luke was seamless as well. I could go on and on, but all in all, really impressed, nice work!

I’m also interested to see how you incorporated the FXinPost Vader Obi-Wan duel. Send a link my way when you get a chance!

Sorry to hear about that, wishing you the best

Would love to see this! I already liked the Solo movie with a few qualms about the blue tint in some scenes and other things. Sounds really interesting, send me a PM when you get a chance!

Hey, love the initial clips I’ve seen on this! Could you send a link?