Here’s some new ones.

A Very Rough rotoscope on Anakin on mustafar. Is that supposed to be in Vader’s castle? No matter what it looks very good!

Would it be okay if they still refer to the Star Destroyer as a “Battle-station”?

Shame about Mute, I really like Duncan Jones and I was hoping that this one would be good. Damn.

When I watched The Disaster Artist the theater messed up and started projecting the wrong movie. At first I thought that James Franco had made a really shitty fake movie just to extend the moral of “follow your dreams” but after a few minutes the theater realized that it was actually a real movie. I searched it up on IMDB while waiting for the theater to fix it and it had less than 10 reviews.

The movie looked like it was shot for 10 dollars, too.

I much prefer the Legends design of the Eclipse. The curve is the part that’s really missing from this one.

I think this one is better. The curve made it feel like a PT ship imo. The sharp edges of this model reinforce the Empire’s sinister presence. I guess there’s two sides to everything.

If I could I would probably use the actual Eclipse design from the expanded universe but I couldn’t find a good enough model. I’m glad you all like it! 😃

I feel like the ship decloaking, tons of lasers coming out of it, then cloaking again would look the coolest and avoid the Death Star parallel.

I really really don’t like mega death lasers as plot devices anymore. Years of superhero movies I guess 😕.
Maybe the Eclipse just has really high firepower but it needs to decloak to fire?

I want to kill Madine using his bridge deleted scenes.

Thank you so much for all of the brain-storming by the way! 😃

There is a fanmade Half-Life game on steam right now called Hunt Down the Freeman. They are charging 25 dollars for it. 99% of the assets in the game are stolen and the game doesn’t even work on launch! The devs are bullshitting excuses.

I’m watching a livestream of it right now and I almost cried because of how fucking awful it is.

Why would the Empire send everything they’ve got? They are the government of the galaxy, they aren’t desperate.

However you have given me an idea: The rebellion attacks an Imperial Shipyard that looks something like this: 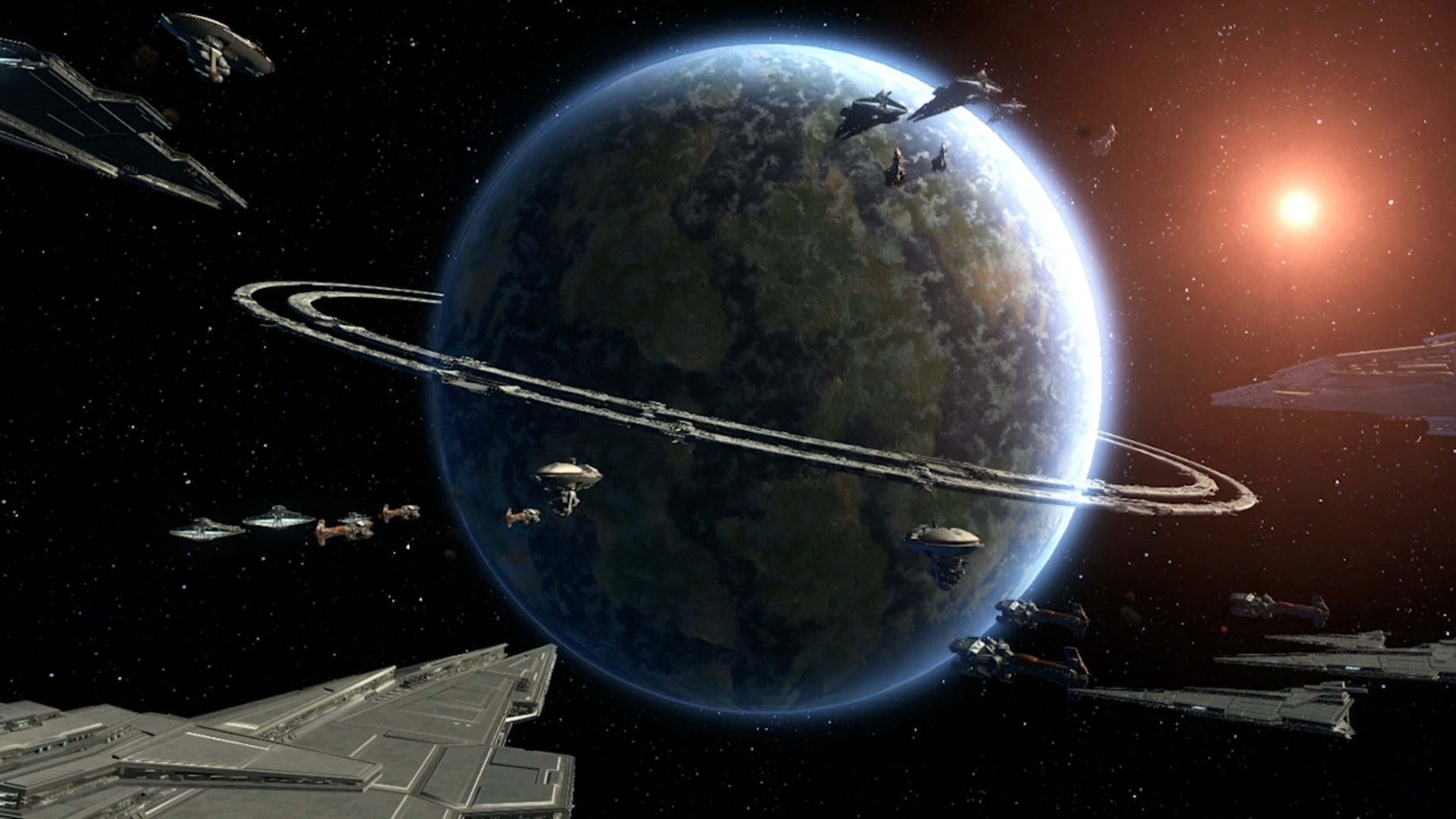 Perhaps they are building a new Super Star Destroyer that the Emperor would personally oversee the final preparations of. Perhaps the opening scene could establish the Endor Shipyard and keep most of the Jerjerrod scene. Maybe the Star Destroyer can cloak (it’s established in Empire that small ships can’t cloak, but perhaps the MASSIVE star destroyer can)

If you go this route, you should use the Eclipse as the Star Destroyer in question.

That’s what I had in mind 😉

It all depends on if I can find a good enough model of it for SFM. I definitely don’t want to just have another Executor.

The movement of the Falcon isn’t finished but in context it fits with the rest of the ending Fleet scene.

I just noticed that the clip becomes heavily compressed and black and white halfway through. Please ignore this 😃

However you have given me an idea: The rebellion attacks an Imperial Shipyard that looks something like this:

Perhaps they are building a new Super Star Destroyer that the Emperor would personally oversee the final preparations of. Perhaps the opening scene could establish the Endor Shipyard and keep most of the Jerjerrod scene. Maybe the Star Destroyer can cloak (it’s established in Empire that small ships can’t cloak, but perhaps the MASSIVE star destroyer can)

I don’t know if there is any way to incorporate the Emperor fight properly into the Endor battle without some impossible-to-convey excuse. I’ll try it though.

Also I think the shortest I would let the film be is 1h 50m. The hardest part will be keeping the Jabba part long enough.

Really, if cutting filler isn’t your priority, the Jabba part should be the easiest to keep long enough. I say leave alone until everything else is done and cut accordingly afterwards.

As for the purpose of the Endor bunker, I think it should be a planetary shield around Coruscant Had Abbadon like the one around Scarif in RO. I just don’t see any better of implementing Had Abbadon. The thing is you’d have to give them a target there. Personally, I’d like to move the throne room there for my edit (in the Jedi High Council’s tower of the Jedi Temple, specifically), but it would be a rotoscoping nightmare. If I ever were to do it, though, I would replace the stars with a greenscreen for everyone to use.

I really really don’t want the rebels to attack the capital. That would be a nightmare to pull off.

So, as it is currently:

The Rebel Fleet scene and the Pyre scene would be separated like the Falcon and Broom Boy final scenes in TLJ, with there being a flash of light or something as a transition to a completely silent funeral (with the Force theme).

I also really don’t want the Empire to lose the war in this movie, but I guess the rebels completely losing would be a bummer. I don’t want the Rebel battle to involve the capital, both for practical rotoscope reasons and for my own reasons. I would be fine with something like this:

I will not film any new live action footage for this edit.

Everything in this edit will depend on how it feels in movement. Everyone’s suggestions will be tested and considered.

Thank you so much, RogueLeader. I will take all of that into consideration.

Also I think the shortest I would let the film be is 1h 50m. The hardest part will be keeping the Jabba part long enough.

I might have to have Ackbar dubbed but I would need someone here to do it. I sort of like the idea of Endor orbiting Had Abbadon, however I want to keep the Vader/Luke/Emperor conflict as it’s own scene away from Endor. It isn’t connected to the plot and I don’t know how to connect it naturally.

I also don’t want the Rebels to take Had Abbadon or to have a massive victory, but that might make Han’s death pointless. It’s complicated.

I don’t see how the thing you quoted has anything to do with the ending?

Alright, so according to Gary Kurtz after Han died Leia would then become queen of what remained of Alderaan. I think that this would be impossible without shooting something new, so I might just go with her being in a Rebel command ship or something.

Here’s a shot from the final sequence:
https://gfycat.com/GenuineSaneDonkey

It’s been a little more than half a year lol, how do I get the link to download? I’m dying to see it with the deleted scenes.

Have you PM’d the creator?

The whole reason I was thinking about moving the Emperor battle was to be like the old concept of the whole fight happening on Had Abbadon, but I will go with whatever seems right in editing. I just really don’t like the inter-cutting in the final confrontation because it takes you from something really interesting into something less interesting constantly.

If you want to see an edit that has already tried the Executor idea, look up Spence’s cut. I might do it? We’ll see.