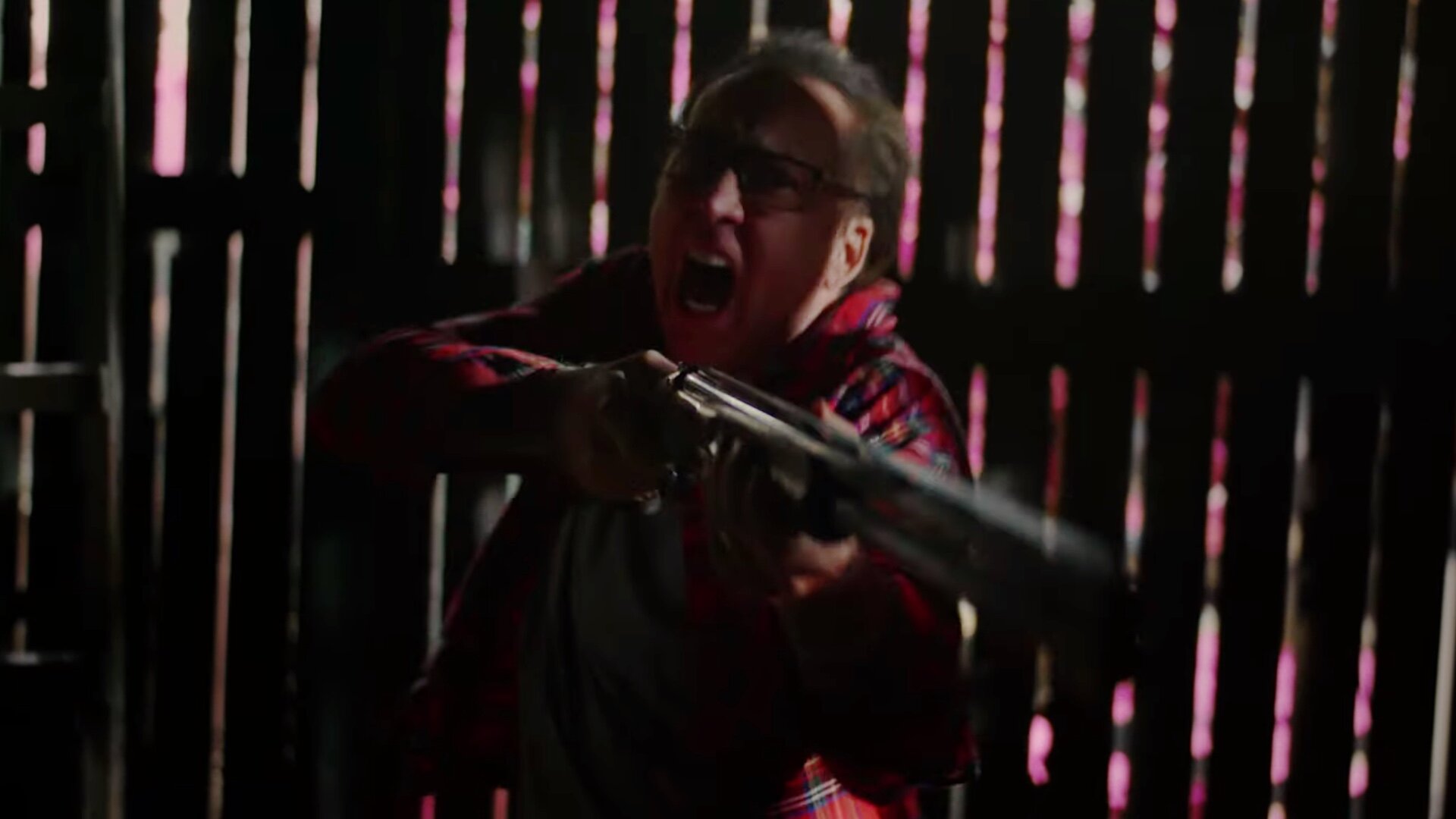 Color Out of Space (Epic Cut) is a fanedit of the Nicolas Cage horror/sci-fi film based on a short story by H.P. Lovecraft. It’s like the movie Poltergeist meets The Shining.

The main highlights of this edit are (spoilers below):

• Slightly trimmed a few lines of opening narration
• Provided faster scene pacing so the first act isn’t boring and coma inducing (most of the edits are in the first half)
• Lavinia (the daughter) is more mysterious and doesn’t give her name to the stranger or have a contrived, unnecessary fight with her parents
• Tightened up the scenes so we don’t have to constantly linger on someone staring, walking, or literally nothing happening
• Added three time-bending flash-forwards during act 1 so we see brief glimpses of the insanity to come
• #1 Added a quick flash of a mutated alpaca’s eye to the dog staring at the alpacas scene
• #2 Added a quick flash of insane Nathan (Nic Cage) staring at the television as normal Nathan relaxes outside in a rocking chair
• #3 Added a quick flash of Nathan splattered with blood during the calm family dinner scene
• Removed bad and redundant dialogue, dumb things like Nathan chasing after the Mayor asking for a doctor
• Removed bad backstory such as the mayor trying to buy Nathan’s land and Ezra referred to as a squatter

No over the top Nicolas Cage scenes were harmed during the making of this fanedit.

PM me for file link. By requesting the file link you acknowledge and agree that you own the Bluray Disc version or online HD version of Color Out of Space and will not share the link with any third party.

Such a needed fanedit. Looking forward to watching. Thnx for the effort.

wishing that there was an edit that just takes the supercool twin baddies with nose-straps fight scene and finds a way to insert it as a flash-forward/epilogue into the first movie. that’s only really good scene imo.

In that case I get where you are coming from now

Um… why are you posting this?

Slip of the fingers, pls see above.

Maybe don’t blow up the 2nd Death Star at the end of RotJ?
vs
just say f*ck the ST?

Ochi’s kinda cool though. It was an interesting subplot. Wish they’d found him trapped in the tunnels alive and confronted him, ending in a quick little battle.

Lots of interesting ideas being discussed here BUT the more I think about this pulpy breakneck stitched-up Frankenstein of a movie, the more I’d like to see an extended cut without redactions/removals before even considering a reimagining of what we got.

Kenobi: A Star Wars Story remains the best (imo) radical 3-in-one prequel take and probably the only way I’d revisit those films in the future. I think it would be great if someone else stepped in to give it a 1080p upgrade (the quality as it stands is curiously poor) and also reinsert Mace vs Sheeve, Anakin vs Padawans, and Anakin vs the Separatists on Mustafar to better flesh out his turn to the dark side.

This fan edit does some great things like reimages Maul as Darth Grevous and opens with the TPM’s Maul (now Darth Grevous) vs Qigon and Obi-Wan, and from there using almost exclusively what footage from AotC and RotS centers on Kenobi’s arc (arguably the strongest content throughout the prequels).

I’d go as far as saying that if given a few upgrades and tweaks this version would have made for a solid/superior one shot theatrical release as it tells a focused epic in under 2hrs.

It’s unfortunate that Disney won’t learn the correct lessons from this fallout.

So I guess it never would’ve quite satisfied my interests either way. I do like the idea of the oracle and Kylo fighting the Knights with only the force but…these morsels aren’t nearly enough to feed off of.

Eh, all these potential character attributes for Rey that everyone is pining for are truly interchangeable if you don’t let strong expectations get in the way. Some people just want a Star Wars movie to show off some cool/mildly violent scifi fantasy tropes (ala Rogue One) with a certain level of thoughtfulness and detail. Deleted scenes on Mustafar and Exegol would have to be reinserted and in order to bring me to view this and any part of the trilogy again.

Honestly, the Palpantine and Rey Palpantine reveals were very true to pulpy comics and short stories of the 1940s through 1960s.

It’s not so much these elements that drag the film down. It’s moreso that along with those elements there’s a total lack of cool factor and foreboding. Like why did they skim over the KoR fight with Kylo and Rey vs the Sith guards. Ochi and the opening stuff with Kylo needed more screen time. Most of time is wasted on false flag threats (Chewies “death”) and predigested motivational/friendship speaches/dialogs and flat/clean jokes. Those are what needs to go, really. I want a The Rise of PALPANTINE edit with a slightly less cheerful/quippy tone. Trim a good chunk of the generic rebel vs FO action too as it really caries no weight or novelty.

I’m just going to have to say this: we can edit this trilogy as much as we’d like (I am doing it too), but one thing is for sure - this trilogy is an underwhelming, conflicting and highly uninteresting mess. I hope and think that we can achieve a 30% overall improvement to the trilogy with edits, but there is no way in hell we’ll go anywhere

Semi-agree. I’ve yet to see a TFA cut that holds my interest throughout (are there any good TFA edits that are 100 minutes or less?..because a film that unexciting should at least be short in length!). TLJ’s Fallen Knight edit really elevates the film by cutting off the fat/corny humor/subplots. Had that been what was shown in theaters I would have absolutely loved it. However, I think that TRoS’s retcons, SW-Universe-shrinking reveals, and recoilings are a new challenge to fanediting entirely.

If cutting all instances of Rey Palpantine messes with the film’s flow too much, Rey Kenobi reveal could also work I guess if everyone’s OK with assuming that Kenobi broke celebacy in exile. Tatooine holds more significance in this regard too. It’s not an ideal option imo however since too many parallels and bloodline reveals shrink the SW universe considerably.

And the there you go, a meta Frankenstein’s monster

JEDIT: if the Rey Palpantine angle is kept perhaps Adam Driver could taunt this instead throughout his “noboby” taunts with Rey in TLJ. As I’ve suggested elsewhere it might also be wise to have him travel to Mustafar and Exegol prior to killing Snoke and his Praetorians. TLJ Luke can also be redubbed to foreshadow Palpantines return perhaps.

If this is done and works, then a TRoS extended cut would be in order rather than a massive overhaul (some conservative trims still needed ofc)

This. Sorely need all the Mustafar scenes reinserted at the very least. Though not essential, they seem like the coolest moments.

I like the fan cut which reduces starkiller base to just a base (cutting out the death ray and planet destruction) personally. I’d prefer to keep the threat/stakes higher with Palpatine and his destroyers

I enjoyed TROS and for me it’s the best of the ST. I didn’t like TLJ.
So I suggest a two movie structure, based on TFA and TROS and using as little of TLJ as possible.
I’d move as much of the flashback stuff (ex: TLJ Ben Solo stuff, TROS Rey family) into the first movie and shorten the derivative plot elements as much as possible (ex: less running around inside starkiller base).

really good idea. might work best as a two-part film, rather than a 3-in-one or trilogy. I’d also move Palpantine & Snoke clones reveal prior to Kylo/Rey fighting the TLJ version of Snoke, then it’d make more sense and give Kylo even more reason to turn on his master for the sake of disillusionment as well as his other motivates. to this restructuring effect, the opening Kylo scenes from TRoS should come after some of the earlier TLJ Snoke scenes (?).

could potentially be a decent 2-part film if done with the right care.

*addendum: is it possible to kill off Leia in her ship (TLJ)? I’d think that that’d be narratively speaking the best place for it to happen.

The bright side of this travesty is that now Disney will never make another Star Wars trilogy without planning it out in advance.

truly. If they adapt KotOR or cherry pick from it to a similar effect for a dawn of sith and jedi film series (which is the best bet for the franchise at this point), story/plot/character planning will be a prerequisite. no doubt.

My review: a film to get drunk to and passively watch without processing the many logic gaps and conveniences (rooted in a safe, inept, albeit boardroom-approved screenplay) which are occurring onscreen. But in a state of sobriety this film is equal to that of a slightly more coherent Transformer (live action) movie. A smudgey cgi thrill ride with an emphasis on “ride”. It’s fine as casual/disposable/forgettable entertainment but fails as a meaningful SW film, managing to implode the purpose of the entirety of Disney’s Sequel Trilogy rather than give it even a salt’s grain of weight. The biggest takeaway however is how, by bringing back an old villain and overused stakes rather than actually developing more interesting/novel ones, Rise of Skywalker manages to shrink rather than expand the SW universe considerably.

*I’m not a PT fan (because of its execution) but I do really like the story of the PT and many isolated scenes within. The Kenobi fanedit has become my go to for revisits. While I thought that TFA was too generic to enjoy as a movie, there was a glimmer of hope in it’s characters and actors. TLJ edited without subplots is my favorite of the ST because it dares and risks and deconstructs perhaps even more than Empire does. However I’m more of a despecialized OT/RO/Solo fan. RO and Empire being my faves.

**I’m not disappointed in Disney so much as myself for holding out hope that they’d pull this cookie cutter of a trilogy off with their nearly limitless resources.

Not exactly. I couldn’t begin to wager a number but… Gotta a feeling that it’s gonna underperform and become a huge upset for investors

Not building KoR as main antagonists behind Snokes rise to power and as obsessive cultists hellbent on resurrecting Palps (without actually succeeding, and moreover, unleashing forces more abstract, uncontrollable, and alien) is a missed opportunity I would have liked to have seen. ST sorely lacks fresh/interesting villains.

But alas, I’m just showing up to theater to enjoy the eye candy for what it is at this point. I’ve liked RO and Solo and I’m liking Mando enough that there’s nothing I needed from this trilogy. It’s useless to pine.