Nothing much to discuss about that episode. Another very standalone one and a change of pace. Needed more character development or conflict I think, but I still really enjoyed it and loved seeing the Empire use iconography of the Republic - like V-wings and AT-TEs, as well as of course clone troopers. Makes me wonder if we’ll see one of those repainted venators this series. I really hope so.

I’m not sure if I’d personally go as far as saying its more intimidating, but I do think it still works really well and I disagree with the argument that Jones now sounds too old to properly play Vader.

I agree. As long as he’s able and wants to, Jones is the man for the job. Scott Lawrence from games like Tie Fighter and JFO also does a very good job.

I saw someone in a comments section say that they thought older James Earl Jones’ voice for Vader (in Rogue One and Rebels) was somehow even more intimidating than the original voice. It’s a take I’d never seen before. Does anyone else think this?

Forgot to say I enjoyed the first episode well enough! Not the most memorable character names but all the main characters are likeable. I love new wave music so of course I’m digging the soundtrack and there were a bunch of genuinely really funny moments.

Oh and yes the intro song is stuck in my head.

You could think of it cynically as a way film studios milk more money out of one film (especially if the extended edition is for a film generally regarded as bad) but I just find them interesting. Apocalypse Now is better than Apocalypse Now Final Cut (I haven’t watched redux, probably never will) but I still enjoyed the extra scenes as a matter of curiosity and wider depiction of the vietnam war under the same directorial vision. Apparently the ‘ultimate edition’ of Batman Vs Superman is a version of the movie that’s more fully realised, and better. Zack Snyder’s Justice League could be seen as an extended cut of Justice League, and it’s certainly better. Even though I really dislike The Rise of Skywalker, I’d love to see an extended edition of it with deleted scenes to see how they affect the film.

I like to really understand movies and extended editions are one way of doing that.

This isn’t really a re-write idea as such, but I’ve been thinking recently: to me the sequel trilogy as part of the ‘Skywalker saga’ feels like a bit of an unnecessary add-on, partly because it calls back so much to the original trilogy instead of taking a more natural next step. George views the original and prequel trilogies as one entity, the complete story of Anakin Skywalker; I don’t really see it that way, but why don’t we run with that and make the sequels an openly new saga of their own? Hell, even make it a 6-film long epic. Something with the scope and scale of the prequel and original trilogies combined, but told in a linear way and meticulously planned out from the start.

A few very vague rewrite ideas but I might do something with at some point: 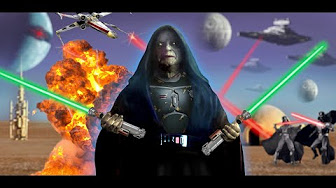 The Rise of Skywalker - Look What You Have Made by Nerrel

Excusing the deliberately terrible thumbnail, this 40-minute critique of TROS is genuinely one the most intelligent and believe it or not, important video essays I’ve ever watched. It goes beyond complaining about the plot, having you understand the movie and why movies like it still get made. It has important thoughts about the current state and future of cinema in general, something that’s never really occurred to me before but which makes me very worried. Please watch!

Beware of spoilers for Colin Trevorrow’s Duel of the Fates and The Mandalorian season 2.

I wonder if the Kaminoans made Omega to make sure they always had some fresh Fett DNA on hand whilst they were making Alpha.

I think this is it, yeah. And now they need her DNA to make a new clone army of their own.

On the topic of Boba, so did anyone notice the metal plate on the back of Cad Bane’s head? Could it mean his standoff with Boba already happened? 😦

This was shown in concept art from the starwars.com episode guide to last week, so I’d already seen a few videos on it. Lucasfilm story group/writers seem to be treating that unfinished scene as canon - although I don’t know if Cad Bane was always meant to survive it.

Having such damage to his brain could explain why he wasn’t performing well in his fight against Fennec. She was able to outmanoeuvre him despite being younger and less experienced; although we could also put this down to his forte being blaster shootouts and hers being martial arts.

So, Omega in Book of Boba?

I can see it. Lucasfilm seem to have planned out their upcoming projects and are connecting them well.

I would love to finally see the surface of Dantooine as we only saw the planet from space in Rebels, but doesn’t that look like an Imperial turbolaser?

I don’t know what it is about the High Republic, but the usual rage bait youtubers seem to have really latched onto this project to push an agenda of hatred against Kathleen Kennedy and Lucasfilm, even though many of these same people have been enjoying stuff like Jedi Fallen Order and The Mandalorian. Videos like these which were ‘criticising’ the project before anything from it even released often use phrases like ‘woke politics’ and ‘SJW garbage’ to trick fans into thinking that diversity in storytelling is a bad thing, and to stop them from purchasing the new books and comics which they otherwise might have really liked.

I feel strongly that these kinds of videos (clickbait masquerading as valid criticism) and the toxic fans they produce are a menace to the entire fandom, and it’s worse that the High Republic project has been stunningly good so far for the majority of people and that the creatives behind it - like Charles Soule, Claudia Gray and Cavan Scott, as well as High Republic show host Krystina Arielle - deserve immense praise, let alone insults and harassment as a consequence. ‘Fans’ like these, who focus more on what they hate about star wars than what they love, make it very difficult to be a star wars fan sometimes.

To those who like Rebels and to those who don’t, I really recommend watching this fan-made documentary. It’s an hour and a half so obviously that’s a big ask, but I watched it over several days and found it extremely thoughtful and engaging. Sam Witwer even posted about it on twitter.

It really delves into the mythological inspirations behind Rebels, and there are many. 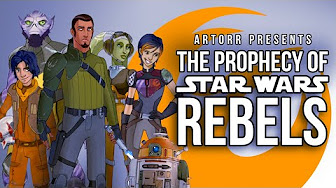 About to dive into Star Wars: Droids for the first time. I’m really interested in seeing what the exploration of the pre-ANH era was in 1985!

I’ll probably send any thoughts I have into here each time I watch an episode. The shows I grew up with were The Clone Wars and Rebels, and I thought some of you long time Droids fans might appreciate seeing what a first time viewer thinks of this bit of early Star Wars tv.

May the force be with you, Jason - good luck with your project!

That show is downright unwatchable.

You’re no extra-terrestrial being fmalover, I think such huge differences of opinion are quite common in the Star Wars fandom. Think of how loved the prequels are by the current generation, while hated back in their day; or how fans generally think TLJ is either a masterpiece or the worst film ever made.

I heard about that just earlier today. It’s a strange, but nice little reference in TPM.

From what I recall, the unfinished Bounty Hunter arc had Bane and Boba team up to rescue a child kidnapped by Tusken Raiders. Then Bane and Boba later duel over some ethical dilemma, I think Boba was leading a town insurrection for some reason on Tatooine.

Cad Bane’s introduction to TBB was brilliant, with amazing music by Kevin Kiner and a tense shootout scene… but damn, I didn’t know the details of this unfinished arc before but it sounds awesome. It’ll have been said a million times before, but I wish we’d got this. 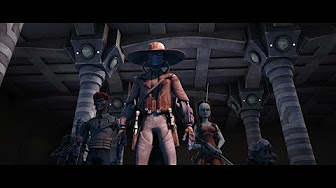 On the topic, Kevin Kiner took this Cad Bane theme by Takeshi Furukawa (at 0:06 of this video from 'Hostage Crisis) and slowed it down to make the great western music from the latest episode.

I think most people prefer imaginative creativity though.

well yeah, I do as well, and recycled imagery is a pretty poor substitute for this. But ideally, both at once are interesting - it’s not a matter of one or the other. Star Wars can break new ground and expand horizons while still containing plenty of callbacks to what’s come before.

I don’t think the execution of the prequels is the best, but I do think the era is very imaginative.

I think this was my favourite Bad Batch episode yet. So much of it was tense and there were a whole LOAD of fantastic scenes, like Crosshair’s first standoff with the Batch in the artillery chamber, igniting the engine, and the very western style shootout with Bane. Those were amazing. I love TCW and Rebels, but in both of them, regular separatist droids and stormtroopers respectively rarely feel like a threat. One of the highlights of TBB so far - and this episode in particular - is that the Empire (or at least, Crosshair) is really on top of things. The Batch were being blocked at every turn until finally they managed to turn Crosshair’s strategy against him.

Omega being captured is another similarity with Mando to add to the list, but I genuinely feel it was done better here than it was in chapter 14. I felt more. And I can’t wait for next week.

Lazy references and recycled images are not clever or interesting though.

They’re interesting to at least two people, including me.

Nice that it’s taking place at an actual anime event. I’m excited to see what this looks like.

I wouldn’t have said risk-averse - creations like the Bendu and the World between Worlds are bold choices and have occasionally not gone down well with many people.

I get the ‘cop-out’ bit because few main characters die, and Ezra’s dark side tendencies are set up then last for two episodes, but that’s my personal preference. Rebels is at heart a fun and hopeful show so I’m perfectly fine with most characters living to get happy endings and such, and I’m glad more episodes weren’t tainted by Ezra doing shit like mind controlling Imperials into killing themselves. We got those episodes where Ezra is heading down a different path, he learns his lesson, the show gets its theme across, and it doesn’t need any more time spent on it.

Text-free cover for Doctor Aphra omnibus vol. 1 by Ashley Witter.
Imo Aphra is one of the best new Star Wars characters and certainly one of the most charming. 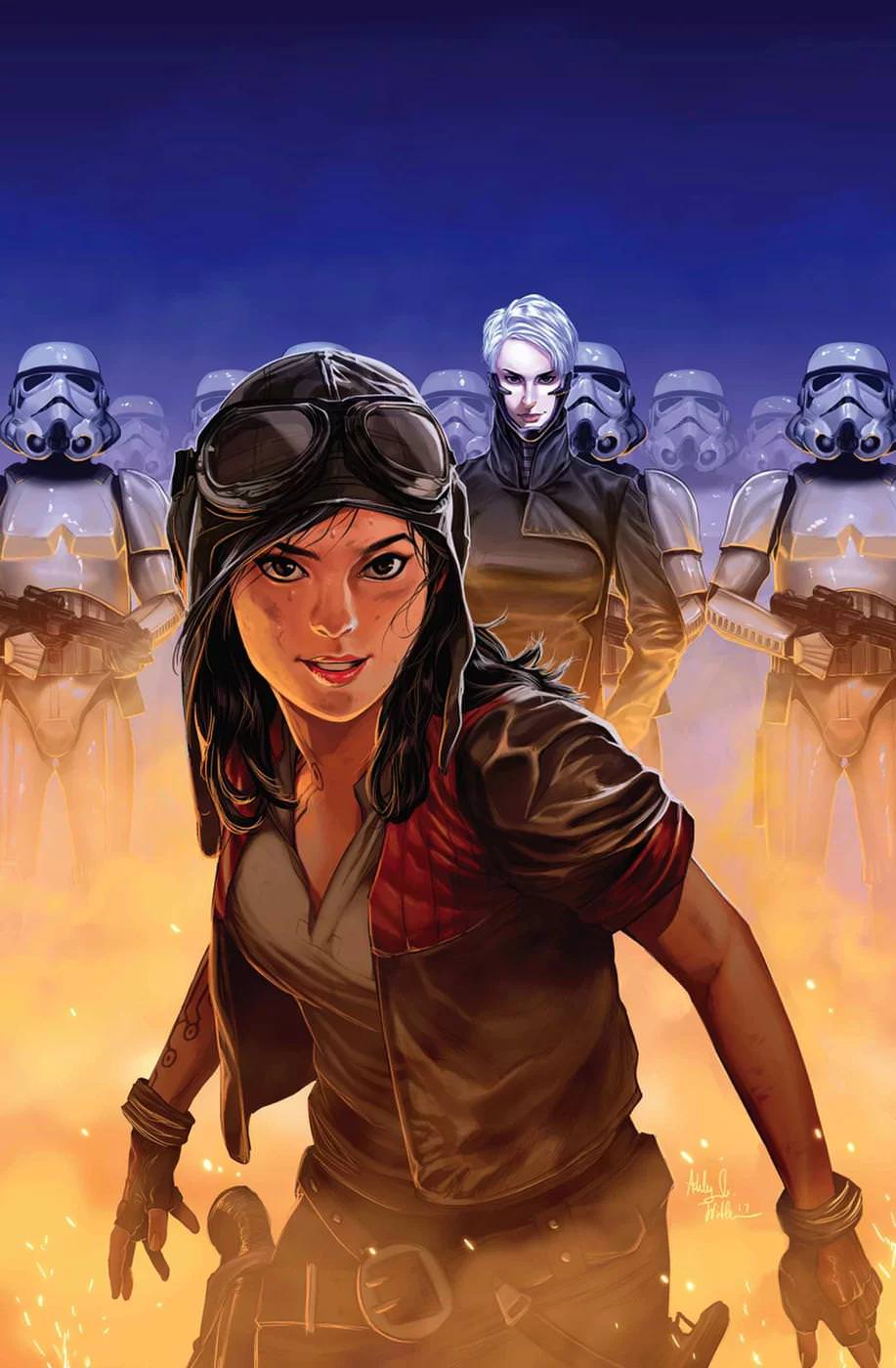