Sources went through temporal noise reduction, and when needed (usually with MPEG-2 sources) deblock and/or sharpening

aah, Sources, not source. I guess I don’t need to check this thread again.

I’m skeptical. I see a lot of detail in the results not even present in the original image. Also not sure why blurring and sharpening operations would be changing the color. Is there some temporal smoothing going on as well, which is getting rid of the compression artifacts? Or are the “before” images not a true representation of your source?

Why are you double posting shots of Return of the Jedi here in the Star Wars thread.

And then people post a one word comment, and quote the entire image again, so we
see it 3 times.

It’s already in the Jedi thread. Am I missing something.

You’re already being mean in another thread. Why subject us all to your meanness several times?

For what it’s worth, I think Dre’s latest CC in this thread is the best one. The others are too green or too orange for my taste.

Williarob, at least your DNR’d version doesn’t cause the whole frame to warp when Luke jumps into his speeder, or have facial features move around peoples faces!

I started watching late last night, then skimmed through as it was getting late. I love the presentation! I don’t keep up on a lot of the test footage available, and was surprised by how much has been released or has leaked out.

Exceptional work! Thanks for the samtheq!

That could be due to the reel change in the middle of that scene.

Oh, I assume it’s due to that. It looks like a different source was flown in, nearly flawlessly I may add, to correct some damage at the head and tail of the reels. I just though if the project was to better match the various reels to each other, why not better match the various sources to each other as well. I only noticed these two instances, so, not bad, but also not too much more work I wouldn’t think.

Just an FYI Dre, because I’m looking at it. I see the colors change in the trash compactor scene from 1:18:59 to 1:19:02. I remember one other noticeable color change, but I’ll have to search for it again.

how would you feel about correcting the few shots that have been (expertly) replaced with other sources, to better match color? I can think of the reel change at the trash compactor scene as an example. Maybe Williarob could provide a complete source list so we know where they all are.

I apologize Williarob. Having grown up with various vhs releases dvd blu ray and other stuff it was just something new to my eyes. Look like we may have found something new that was altered from the original none the less.

No worries. What this probably means is that the effect was produced as part of the color correction process - they artificially turned up the brightness to achieve this look (as opposed to using on set lighting to produce an in camera effect). This would mean that the extended bright version is not on the negative. The last interpositive created for home video releases was made in 1985, and that would have been created directly from the negative - so the extended brightness wasn’t there and I guess nobody thought to re-add it, so none of the home video releases from that point on have it. However, I just looked at the 1982 CED release, the 1983 HBO broadcast and the 1982 rental tape and they all have the extended brightness, which makes sense as they were probably created from the same color timed interpositive as the release prints. 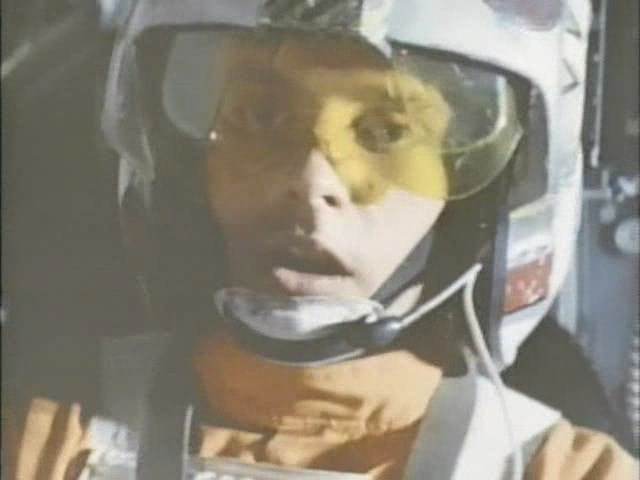 The Japanese Special Collection laserdisc (1986) does not have it, as that was from the later IP.

All of which I find very interesting - this is something I wasn’t aware of until you pointed it out and I started looking into it.

This is interesting! How is it that my copy of Silver Screen LPP doesn’t have the extended brightness?

ZaneFlare92 said:
The shot during the “Luke Pull up” it looks like and this is the only way I can explain it, someone turn the brightness up high for that one shot.

Why don’t you make a screenshot of the image you are talking about.

Well if I could I would. I use MPC-HC and can make screenshots from that program. I see people on here posting photos but dragging it to the “Post Content” box doesn’t work. I don’t want to set up a photo-hosting website I’m barley gonna use and get junk email. Maybe Towne32 could help out, or someone that could can. It’s after the flash from Luke Strafing run, 1:43:53:979-1:43:54:468.

Yes, at 1:43:54. All other releases I checked, including Silver Screen get bright, but return to normal levels. 4k77 stays bright for the whole (brief) shot. No screenshot necessary, I think people can view it for themselves.

It’s definitely there on the German broadcast and the Blu-ray, but it’s not very noticeable since the brightness is so low.

(BTW, I just updated the comparison gallery through this part of the film, using only shots that have additional sources added to them. I’ll finish the whole gallery someday… 😉 )

Yeah, I think you’re right. you know where else I notice it? It 4k77! it has to be because of the brightness. Thanks, and sorry!

duplicate (that was weird)

Neverar, I’m seeing some odd blur around the troopers (especially above their helmets) at about 51:54 to 51:56. During the “door’s locked, move on…” scene.

Had a chance to peruse this last night and this morning. I am stunned. It’s hard to imagine a print in better condition. And I really agree with the minimal color tweaking and method in which it was done. The transitions between the sources are nearly flawless, and are so necessary to maintain GOUT sync. Willarob and the rest of TeamNegative1 should be given medals. This is obviously a labor of love, and I’m so happy that they were generous enough to share it with us. Thank you!

I was actually trying to preserve the movement of the elements in relation to each other, since that was always there.

Oh, I see that now, it’s that way in the original! My mistake, sorry.

Very cool. I see some of the elements are moving with respect to each other. I wonder if it’s because you are applying the same stabilization to all 3 (raw, mild, and heavy noise reduced). If you think about it, the heavily noise reduced copy is already more stable just from the noise reduction. Using its motion vectors to stabilize the raw may not be appropriate. Maybe try stabilizing them with the same anchor points, but separately?

I’m not sure if this is the right thread for what I’m about to say, so if there’s a thread for something like this, please point the way!

Rewatching ESB for probably the 50,000,000th time, I actually noticed something weird about one scene in particular. Right when Darth Vader says “No, I am your father”, pay close attention to him. I can’t really describe what it is, but it’s the way he moves as he says that immortal line. It’s very subtle, but if you look closely, you’ll notice it.

I’m not sure if that’s David Prowse moving with the rushing wind or if it’s something from the editing process. And the only thing that comes to mind seeing him move like this is that it could probably be something called the “forward-reverse technique”. I say that because it reminds me of when the technique was used for the scene in that godawful “Batman & Robin” movie when Robin comes out of the water and goes right back in again. Only with ESB, it wasn’t as colossally (and painfully) obvious.

I don’t know if I’m the only one who sees this or if I’m just rambling about nothing, but if anybody has the answer to this, I sure would appreciate it because I keep thinking it’s a Special Edition change until I watched the Grindhouse Edition and noticed the subtle movement there. So I’m guessing it’s been there since 1980. So really, my question is what the heck it is?