Years ago I attempted an edit of TPM. I never finished it, but I remember doing a very simple edit in the beginning that seemed to work quite well. It was the scene following the ship blowing up in the hangar and the Jedi reacting to it. Gas is pumped into the room and the Jedi hold their breath. Cut to “Sir… they’ve gone up the ventilation shaft.” This would omit the inane line “They must be dead by now, destroy what’s left of them”, chopping through droids like butter, Qui-Gon trying to burn a hole through the blast doors, and the lightning fast down the hall move when evading the destroyer droids which is never used again. They emerge in the main hangar bay and Qui-Gon says “Battle droids.”, as if confirming a suspicion out loud rather than seeming surprised at seeing lots of battle droids even though they just fought a dozen or so of them a minute earlier with the scene intact. The Jedi kicking ass is then saved for a later scene when they’re trying to free the Queen from the droid escort on Naboo. Making of the Computer Graphics for Star Wars (A New Hope)
https://www.youtube.com/watch?v=yMeSw00n3Ac - from the evltube YouTube channel (10 mins.)

The blurb:
“The computer graphics for the first Star Wars film was created by Larry Cuba in the 1970s at the Electronic Visualization Laboratory (EVL) (at the time known as the Circle Graphics Habitat) at the University of Illinois at Chicago.”

Not exactly sure what year this videotape is from, could be late '70s or early 80’s.
More information on the lab at www.evl.uic.edu and Larry Cuba at www.well.com/user/cuba

It is a jarring spectacle, the handsome troubadour pleading with the casual listener, promising anything to escape a dodecahedron’s-eye-view of some distant nebula’s grodiest singles bar.

Alternatively, here is the original version of the video before someone - Ocean, his label, his astrologer — purposely changed it to make it completely insane.

Empire of the Sun is a good one, often overlooked 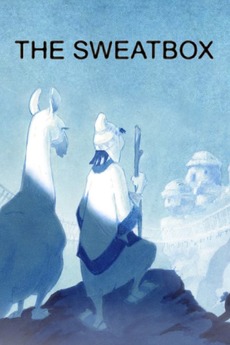 The blurb (from IMDb):
“Sting’s wife Trudie Styler documents the turbulent bureaucracy both Sting and the filmmakers went through in order to complete The Emperor’s New Groove (2000), a Disney film that underwent extensive storyline changes from start to finish.”

Article about the making of Kingdom of the Sun/The Emperor’s New Groove and The Sweatbox documentary:
https://www.vulture.com/article/an-oral-history-of-disney-the-emperors-new-groove.html?utm_source=pocket-newtab

Backup link (from archive.org):
https://archive.org/details/TheSweatboxDocumentary_201704
This seems to be the same rough-cut VHS as the YouTube version above but with more complete beginning lead-in and credits outro w/ music. 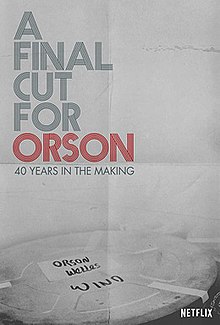 The blurb (from IMDb):
“A glimpse behind the scenes into the complicated process of recovering and completing the final film of legendary director Orson Welles.”

Also worth checking out is the feature-length documentary “They’ll Love Me When I’m Dead”, streaming on Netflix.
I find the film “The Other Side of the Wind” both brilliant and frustrating. It’s something about the slapdash nature of some scenes and some awkward and unnatural sounding dialog. The film was apparently largely improvised and it definitely shows, not the fault of the people who finally had to put the film together. The 35mm film-within-a-film scenes were excellent though. It’s a bit like Alien 3 for me: I enjoyed watching the making of the film more than the film itself.

I watched the Disney Gallery season 2 episode and saw the title “Huckleberry” projected at the beginning, and it reminded me of an IndieWire article I’d read in 2018 about Werner Herzog’s next projects and he mentions acting in “a big franchise film, about which I’m not supposed to say anything, I can only say the title. The code name is ‘Huckleberry.’”
At the time I thought, as the writer did, that it meant that he was going to be in the new Top Gun.
https://www.indiewire.com/2018/09/werner-herzog-franchise-film-huckleberry-japan-tiff-2018-1202002748/

This sounds like quite the endeavor, I’m very much looking forward to it. I don’t have any input right now other than maybe consider putting in dates as a way of transitioning to things and conveying passage of time and days (I tried this with my own edit I abandoned some time ago). An example would be: “Date 13:5:4” (year/month/day) for the first part of the battle of Christophsis “Cat and Mouse” (May the 4th), then “Date 13:5:5” for “Hidden Enemy”, and so on. The actual month/day is made up as it’s not clear exactly when these events occur within the year (13 post “Great ReSynchronization”, or 22 BBY). Here’s a wookieepedia article on the Great ReSynchronization, which would have been the dating system used during the Clone Wars period:
https://starwars.fandom.com/wiki/Great_ReSynchronization
I used dates to show the passage of time when editing together the Domino Squad Episodes. Not sure if this helps but figured I’d throw it out there.

Overall I liked the episode, but…
I lol’d when Fennec showed her hydraulic mid-section that Boba apparently made for her. Reminded me of this: https://www.youtube.com/watch?v=oeYpkz8fjfc

The tiny handcuffs at the end cracked me up too. Also, why’d they handcuff him? Will it stop him using the force if he can’t wave his hands?

I’m only typing up about the first third here, have to watch this again to give complete thoughts, will do so soon:

I like most of what you’ve done here, this was quite enjoyable.
The beginning was well done. Though, without much dialogue, it almost feels like an opening credits sequence without the credits up until Bilbo takes the fish off the pan. (Might add some reverb to Galadriel’s voice at the intro, you can hear the cuts at the end of her words)
The dwarves’ arriving, dinner and meeting were all done very well.
The montage during the Misty Mountains song was excellent. And though I kind of miss that little moment where Bilbo looks at the contract and then to his door (not the running down the hill “going on an adventure!” bit), it worked nicely that it just cuts to him on the horse, having been convinced to join the party by the song they sung.
I think losing the trolls scene was a bit jarring, even in trying to separate myself from the source material, it still seems like something is missing there. Sure, it can just be that they happen to come upon a few petrified troll statues along the way, but for the uninitiated audience there’s nothing to explain why they’re petrified. Not a huge deal I guess.
The fireside Azog story was well done.
Very impressed by the orc chase scene with no Radaghast, very well done. Most edits omit that scene but you’ve made it work in transitioning to Rivendell.
The Rivendell dinner scene was good, also the next scene of the moon runes reading.
Great work on the small flashback scene of Thorin contemplating “the sickness”. You did a great job re-purposing the backstory scenes in the original.
I think there should be retained some of the introduction to Galadriel and Saruman before the white council, again, just for the audience’s sake (who are these people?), otherwise the meeting itself was cut together well.
The added Thorin dialog during the departure didn’t work for me. Thorin suddenly insulting Bilbo as they’re leaving seems out of character, even for grumpy dwarf Thorin.
The stone giants were not missed.
The goblin town scene worked up until the part where the goblins were clearly taking them somewhere for a bit, then all of a sudden they’re beating the crap out of the dwarves… then Gandalf shows up. Again, it feels like something’s missing here. Having just a bit of the goblin king wouldn’t hurt here (not that terrible song, though).
The action in the tunnels was cut well with the Gollum scene. The Gandalf audio over the part where Bilbo shows pity to Gollum was a little clunky though.
The fir trees scene and eagle rescue… was awesome.
The scene where Thorin wakes up on the Carrock has an odd moment where Bilbo just looks at Thorin and Thorin notices the mountain behind him, sort of shrugging off the fact that Bilbo tried to save his life. I’d rather have the embrace and “I’m sorry I doubted you” in this instance.

Going Mad: The Battle of Fury Road (2017)
https://www.youtube.com/watch?v=_9klHcXRdSs - from the Warner Bros. Entertainment YouTube channel (41 mins.)
(Actual documentary starts after an introduction by Sean O’Connell of Cinemablend, 2 mins. and 12 seconds in.)

The blurb (from Letterboxd):
“For 20 years director George Miller fought to unleash the ultimate Mad Max movie- Mad Max: Fury Road. Witness George’s journey from the dream of a female warrior to the harsh plains of the Namibian desert to statues of gold in Hollywood, California.”

A video that explains the history, the making of and how The Black Hole (1979) affected how Disney made movies through the 80s, later dubbed Disney’s “dark age”.

Thought of one:
The Creature Walks Among Us - third in the Creature from the Black Lagoon trilogy. I like it, though it’s not in 3-D like the others and a little boring… still it’s better than the second one, Revenge of the Creature (IMO). At least it tries to be different.

Trying not to repeat anyone:

Exorcist III
Captain America: Civil War
A Nightmare on Elm Street 3: Dream Warriors (not a trilogy, only really like the 1st and 3rd… 4 is okay I guess.)
Sinbad and the Eye of the Tiger
Predators

^ Ha! That’s great!
I just saw the “Legends of the Lost Art” episode of magnum P.I. the other night, Indiana Jones-style episode

Return to Forever - The Romantic Warrior (1976)
I used to play Nintendo/SNES games listening to this album in my youth. It’s considered jazz/fusion in some circles but I’ve always seen it as prog-rock. I’m pretty sure the entire album is still up on youtube, I’ve owned the album 4 times on vinyl (people keep stealing it!)

Night Flight article about the making of Rock & Rule:
http://nightflight.com/rock-rule-the-oft-forgotten-animated-post-apocalyptic-rock-n-roll-sci-fi-fantasy-musical/

I kind of love that shade of ‘Dr. Pepper red’ in the room behind the officer in the bottom right panel.

It’s odd how this guy tries to make himself sound intelligent and in-the-know with Lucasfilm, yet doesn’t somehow factor into his bullshit that Disney/Lucasfilm would never take 3 billion-dollar+ money making movies and make them just ‘go away’, however divisively they were received by some fans/him. He claims that once Kathleen Kennedy’s contract ends in 2022 that Bob Iger himself will hire a replacement head at Lucasfilm: A.) Not his decision, KK can decide to renew her contract or choose a successor, B.) Bob Iger is no longer CEO!

Going through my usual need to have my morning news with coffee (which lately has all been bad news), I saw this in an ‘entertainment’ section of google… and I’m still cleaning the coffee off my computer monitor. I seriously LOL’d when I read this crap.
https://cosmicbook.news/disney-resetting-star-wars-erasing-last-jedi

Seriously, comedic gold. Ever wanted to hear the ridiculous ramblings of a wishful heartbroken fanboy? Here’s this “Doomcock Overlord”:
https://www.youtube.com/watch?v=9H91ZTzqVI4&feature=emb_logo
I hope this is an elaborate ruse by HelloGreedo, heh

Sorry if this was posted elsewhere, but I felt it needed shared, if only to give people a good laugh

More Brains! A Return to the Living Dead (2011)
https://www.youtube.com/watch?v=HvuEdFEHKyI - from the Sterlmeister YouTube channel (2 hrs.)

The blurb:
“Retrospective documentary about the making of the horror cult classic ‘The Return of the Living Dead’ (1985).”

^ Ha! I was thinking the same thing about this doc recently. I’m a fan of Harmy’s re-mastering of this one too, I remember seeing just the compressed-to-hell version on Youtube several years ago, wishing I could find a better version to watch. Kudos and big thanks to Harmy!
100th video… Wow. Perfect!