Petrovelly said:
And about Skymaster Edition… I can’t find information about it anywhere.

You can register (with the same user name) on this forum : http://forums.thestarwarstrilogy.com/

Neverargreat’s version is an edit of the Blu-Ray release, with far better colors and details recovered in white areas whiwh are blown out in the official release. It’s as sharp as the Blu-Ray. Could it be your go-to version ?

On the 4k77 side, there’s a DNR version. There’s also the “Skymaster edition”, soon to be released.

Dr Dre, enjoying your latest regrades, I rethought this thread : it’s a shame that it hasn’t been updated for three years and thus remained on page 17 of the section. So I found useful to bring it back to page 1, if you don’t mind. 😉

I know that the color balanced version of TN1’s scan of the Spanish LPP (for many reasons), can’t be considered as an accurate source like the tech prints are. But I still think that, for colors, it is one of the most enticing version I’ve seen. I really love how contrasty (yeah, I know it’s probably too contrasty) and colorful it looks.

Here’s how it can look with a quick single correction. 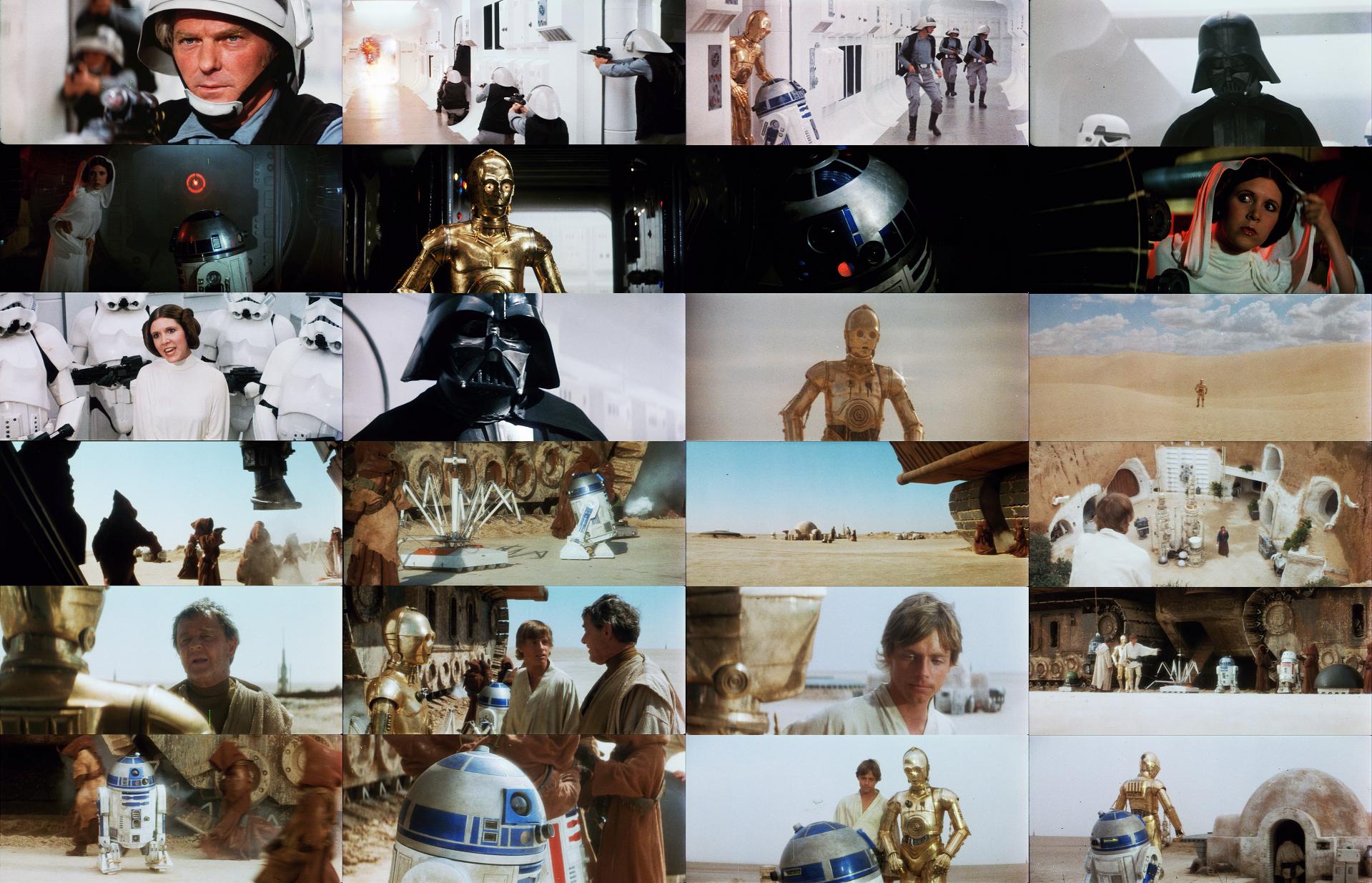 It would be great if, one day, someone manage to give this color timing to a higher quality source.

Yeah, and this time I won’t forget to download it. 😀

It’s the first time I see that scene dark like this. Is it intentional ?

I wonder what he is doing

Has to be cheating on you.

What do you think about stop trolling this thread until you have gone home?

Is it possible to troll its own thread ?

I’m really sorry to say that but… nobody likes the GOUT shifts that you did.
Because they are horrible.

That’s not true. The GOUT adjustment (on page 6) didn’t look that bad. And it isn’t just my opinion, as Dr Dre said that “most of these look good”.

What I don’t understand in your stuff, Ronster, is your idea that the proper way to color correct something would always be “shifting the hue”. It’s never so simple !

But actually, it was just a test to improve what Ronster did. I think the tint is pretty bad and I couldn’t pretend it to be equal to Dr Dre’s corrections.

Looking good IMO ! GOUT is pretty easily recolourable with a single correction for the hole film (as Dr Dre showed with his technicolor-graded version).

I hope the LSD Edition will soon be released. It looks fine !

Ok un-jaundice it at least it does more or less match now. The fist 2 better than the last 2. 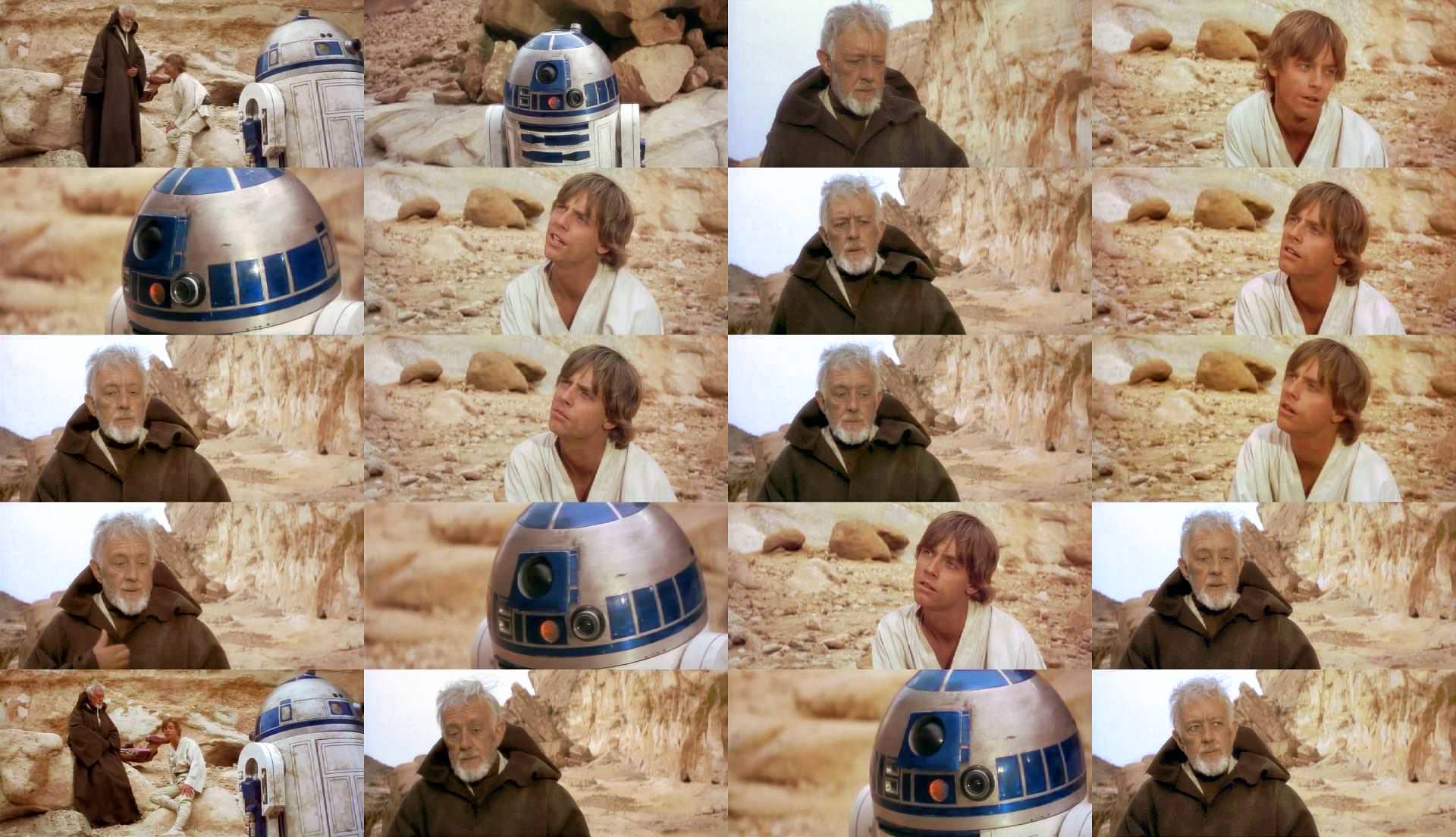 the second looks better for me.

Actually, there was a green-problem in the darkest areas. I tried a second pass : 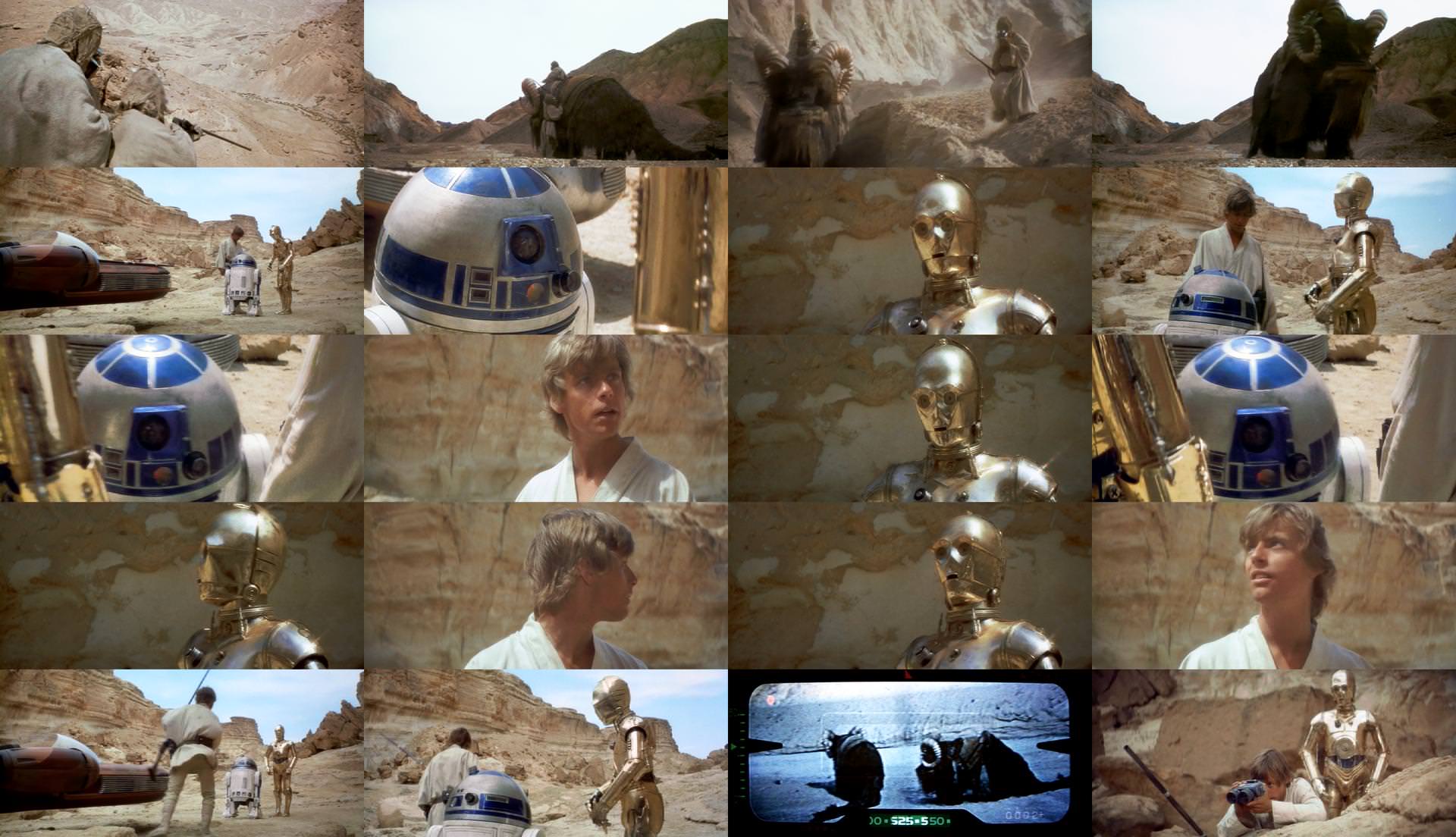 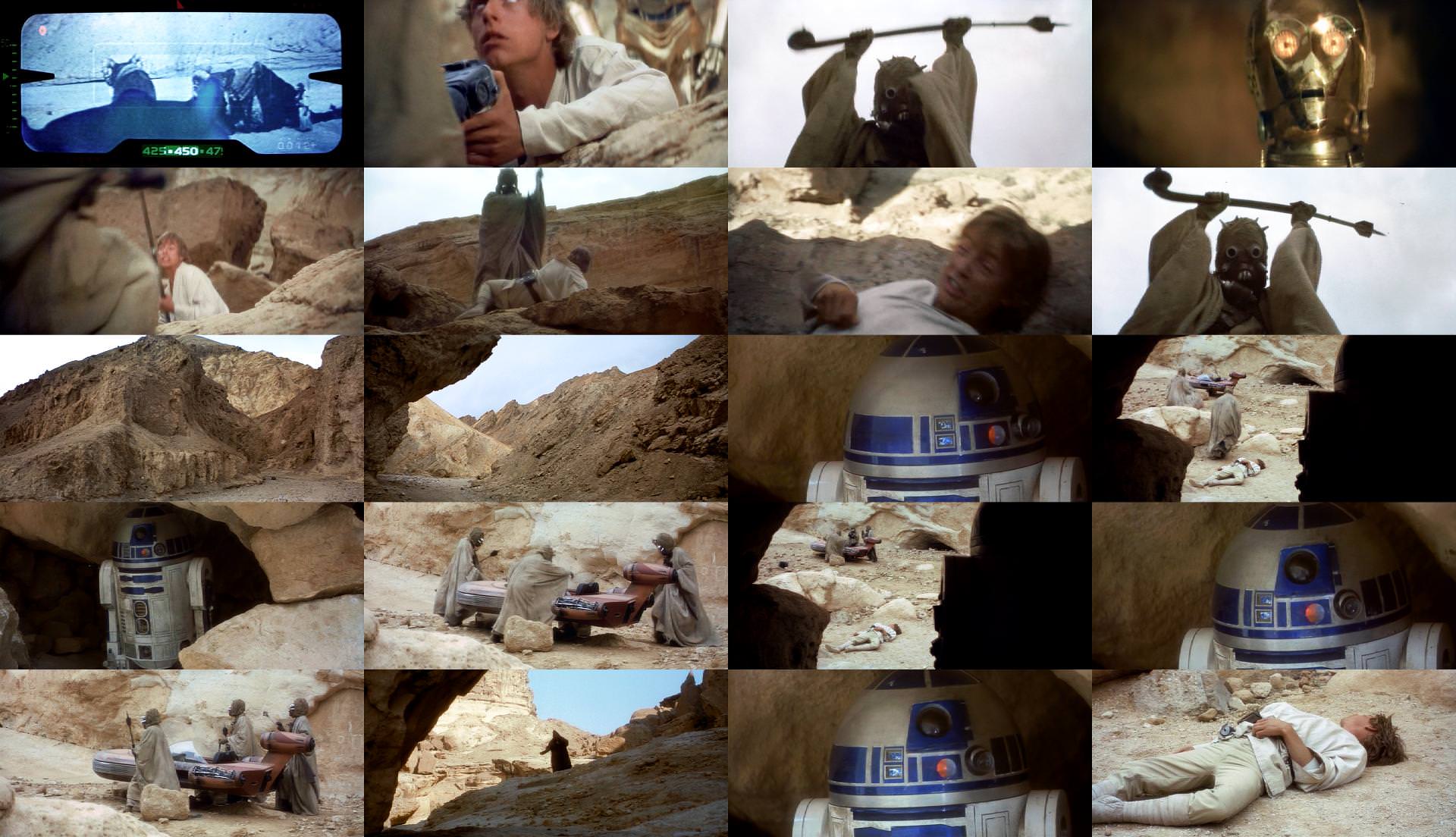 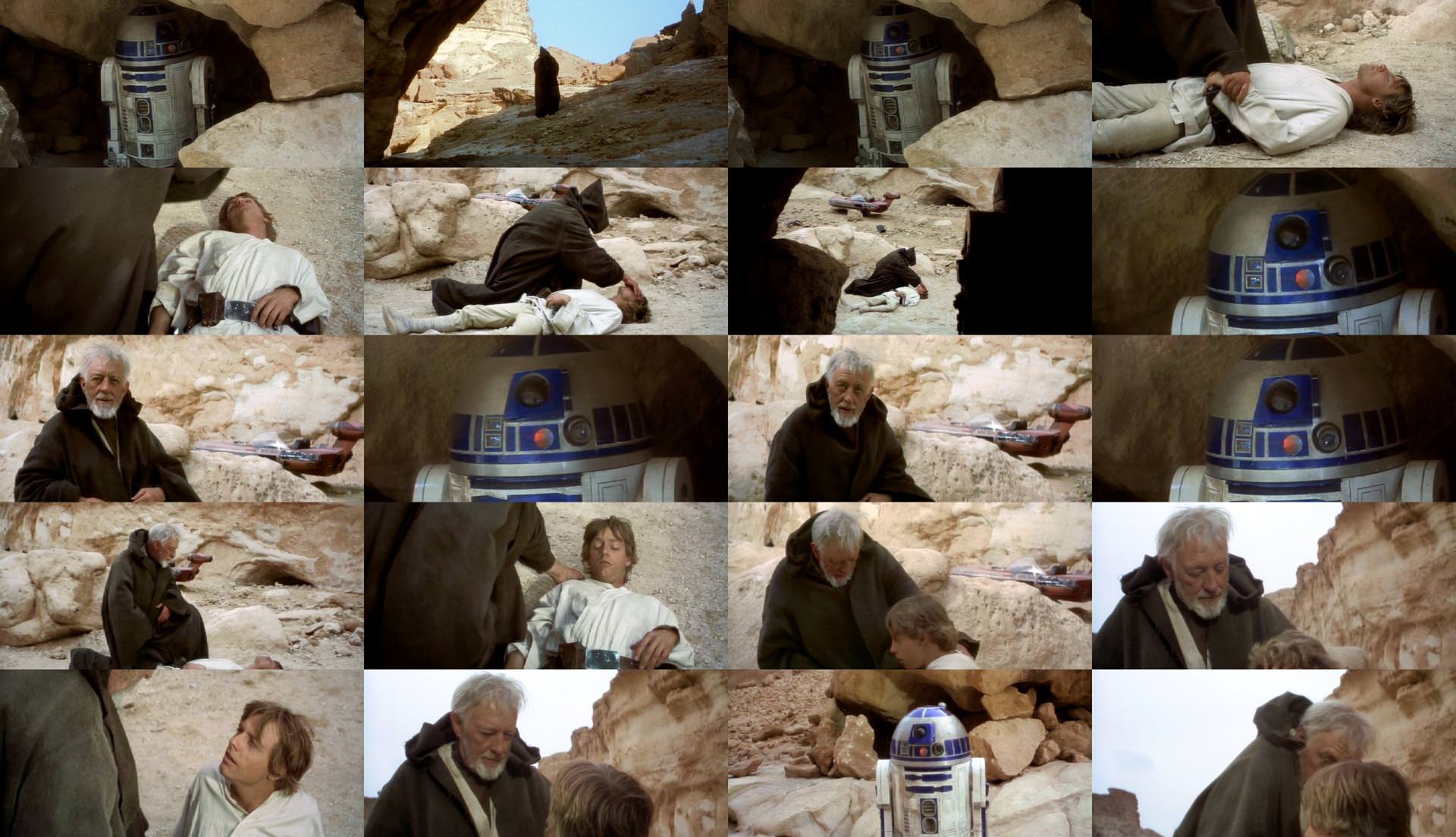 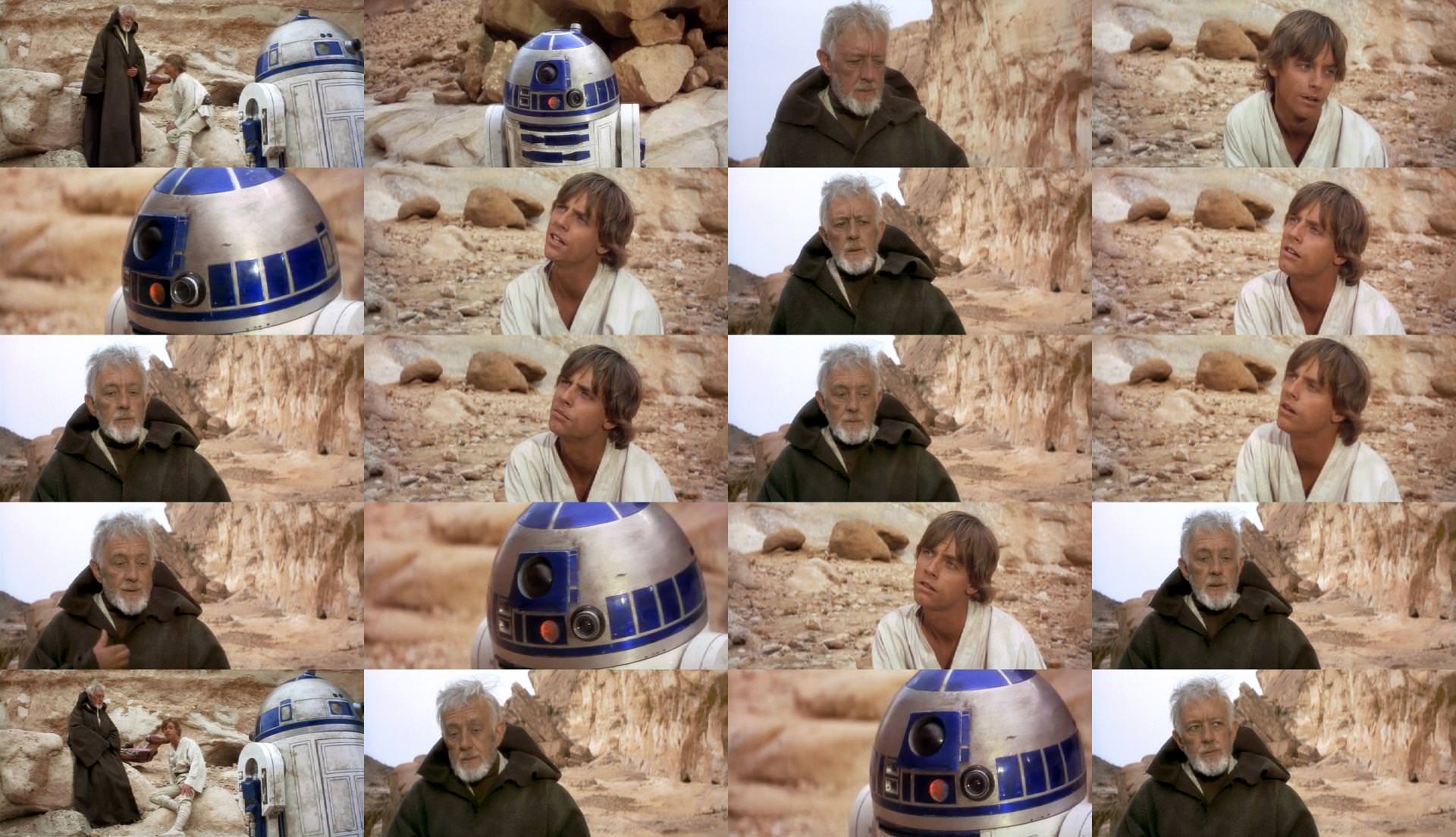 I’m not sure it’s really better than what Dr Dre did. As Yotsuya said, it’s very difficult to find the balanced amount of red.

Do you mean this kind of adjustment Yotsuya ?

Oh, OK. So it’s a matter of bringing it closer to a theatrical projection.

IIRC, it’s just as wide as it can be, because of the blemishes on the sides of the print which create an unfixable and distracting “noise”.

EDIT : Actually, I prefer the first grading - with its appealing blue - for the shots where the sky is visible and the binoculars shot. And for shots 6, 9 and 12 - where Artoo is so blue in the first grading - perhaps a medium between the two versions would be great !

Is R2’s blue that strong in these shots ?

I agree with Towne. Since the beginning of the thread, the colors have been very nice.

Perhaps you could move along to a full film v. 1.0 balanced ? There always will be place for nitpicking and perfectionism. 😉

One small suggestion if I may: the screenshot comparison link below compares your June 1st balance grade with today’s. I confess that I prefer the color of the June 1st a bit more. You can see particularly on line 4 shots 1 and 2 of the Antilles interrogation that the Stormtroopers seem to be a touch too green, yellow and red as apposed to the June 1st. Thoughts?

To me, the second grade is an improvemment. This scene was obviously not as contrasty as the first grade shows. But I think it could deserve to be a little warmer overall, IMO.

Can’t wait for the following shots however !

EDIT. There, an attempt : http://www.framecompare.com/image-compare/screenshotcomparison/F9FJNNNU

The thing I wanted to check is the possibility of recovering some shades which had disappeared in the Lowry master but are in other sources, like that print. There, I decomposed the Print version and the Blu Ray version in Y,Cb,Cr and recomposed it, using the Blu Ray Y channel and the Print color channels.

Let’s look at the walls. The colors are not exactly the same for every elements : some are mint coloured, some are more creamy, some are really neutral (I remember a nice photograph of the set had been posted here a few years ago). But in the Blu Ray, these very subtle differences are no longer visible.

I wonder if that kind of tool could be a good way to give some Blu Ray shots the best regrade possible in order to match the original. If I’m not mistaken, Neverargreat has actually done something like this for the most alterated shots like the Sunset (using the SSE ?).

I know there are some problems in my example (like a remaining - maybe increased - channel misalignment, or the helmet of the soldier which appears to be blown out in the Blu Ray) and I wonder if this process wouldn’t be longer than a sharpening of the print version (for a project like Despecialized for example). Of course, the change is very light and definitly not necessary to make the Blu Ray match the original film, as Dr Dre’s regrade yet does.

But I found interesting to share it wih you. 😃

The fourth frame is the version with the “green cast” removed.

Dre, I’d be interested in seeing this shot at full res, in 4K77 and BluRay versions. I’d like to check something. 😃