looks good, just in time for the holiday season so I can show my friends this shit and see how long it takes for someone to shut off my tv

Or if that’s too complex, then just reorder the Jedi purge to be happening DURING the Obi-Wan/Anakin battle to make it extra tragic that it all collapses at once.

Yes or have palpatine giving his final speech to the senate, the grandiose music fits well, you just have to edit padmé out of the scene but that wouldn’t be too hard. Although continuity could be solved with some of the longer shots having custom mattes and you can still have the close ups and quick cuts be the same because the background isn’t noticeably different.

Harmy is a perfect example of this 😄

The ONLY time money should be involved in fan projects is when they invest their OWN hard earnings into their OWN resources to complete the tasks at hand, that’s an unfortunate reality that must be grasped by everyone who invests their time into shit like this.

I agree with the additional exception of Adywan’s case where a collective donation effort is solely for helping fund the edit process itself but no personal profit is ever taken from the donations.

Yes, Adywan accepts donations, but these don’t make nearly enough to cover the costs of his project, and paypal donations are more of a personal offering than a patreon subscription or buying lame t-shirts. Same goes for film restoration projects where multiple members pitch money to order the reels and such, this is not unethical. You won’t find Adywan on youtube begging for monthly payments so he can sit in front of a computer and change musical queues until he’s blue in the face, Adywan actually uses great amounts of resources, time, and effort, yet I’m sure he doesn’t come close to breaking even.

Don’t get all the hate for Ivan. All Youtubers use Patreon. I understand why some might consider it an ethical issue,but its out of our control. Drop it and get over it. He’s gonna be remembered as one of the greatest fan editors because of what he’s doing to TLJ.

Why the f**k should we “drop it and get over it”? His actions could have serious repercussions for every Star Wars fan edits & fan editors. We have seen what happened when Axanar decided to personally profit from a brand they had no rights to. Disney could see what he is doing and decide to clamp down on fan edits. This could put an end to a whole section of the fan editing community through the actions of one person. Years worth of work, down the drain. And, no, not all youtubers use Patreon. NO fan genuine fan editors monetise their videos on youtube, for one, and certainly not set up a Patreon to pay themselves a wage.

Man really said it the way it is, fan films and fanedits should be inspired by the merritt of creativity and should be made without any question of legality, the rules set up by this community have been put in place for ethical and legal reasons, we should NOT be paying people to fuck with disney and further fuck with the fanedit community by risking everything we have built on this page for over a decade. Projects such as these are hobbyist projects, not jobs. It is possible that good hobby work done here could land skilled members new jobs in the industry, but there is nothing correct about breaking the core rules and forcing yourself into a career based on dishonesty and ignorance of the law and history of projects such as these, I’m so done with seeing this shit man. Ivan had some pretty cool creative ideas, and that’s it, at the first sign of criticism he turned to his small gang of worshippers that he calls “fans” and shit talked the entire website like a middle-school girl, pathetic. The ONLY time money should be involved in fan projects is when they invest their OWN hard earnings into their OWN resources to complete the tasks at hand, that’s an unfortunate reality that must be grasped by everyone who invests their time into shit like this. I’m quite pissed that I was one of the first viewers of Ivan’s channel and that I linked him to this site pretty early on as an opportunity to better his own project and to welcome a useful new creative and productive member to the forum to have this ignorant drama arise based on pure greed. Don’t watch Ivan’s edit, don’t leave a good review, or a bad review in the comments, don’t buy his merch, don’t pay him, this guy is bad news.

This isn’t super radical redux but is there a better version of the Death Star replacement sequence from the Prequel Fanedit Care Package?

What, you guys don’t believe TCW Maul can be seemlessly incorporated into AOTC & ROTS? 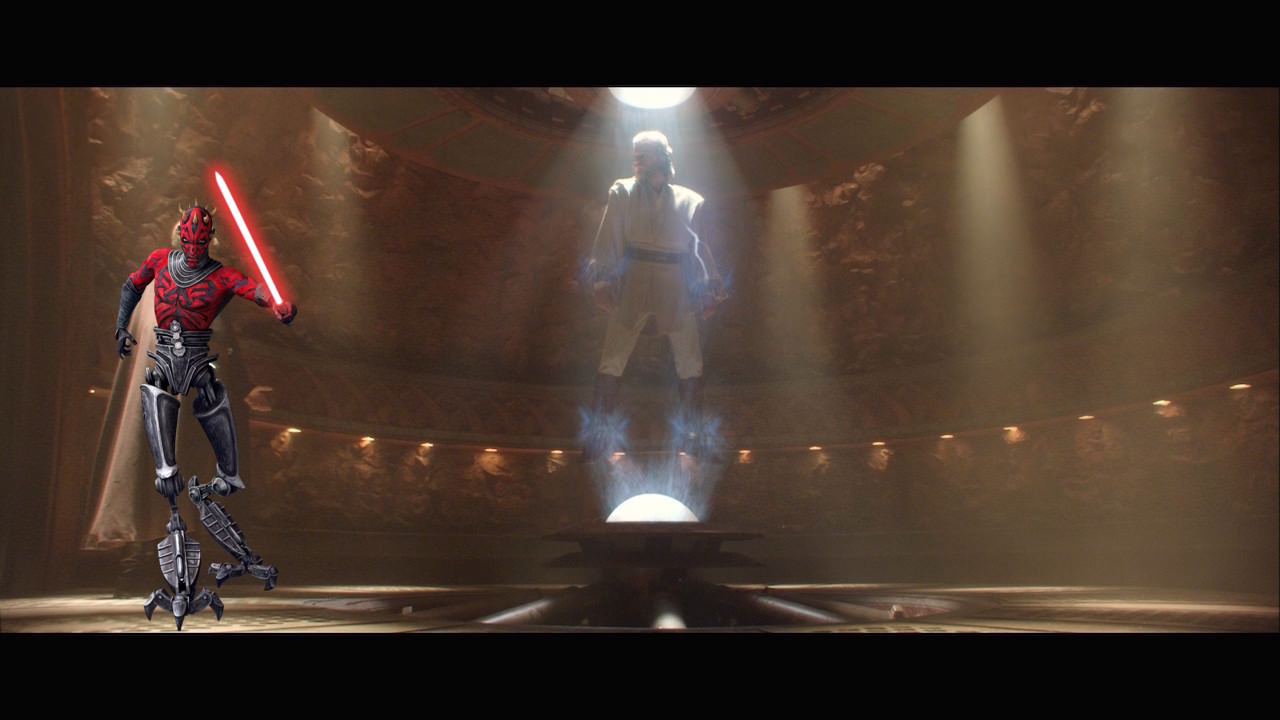 Hahaha, that’s a concept that could be tackled quite successfully but with some very clever editing, I have a similar scene in my edit, maybe I’ll put up a clip soon

This thread is practically dead and I know y’all haven’t seen anything from me in forever BUT this project is not cancelled, I’ll do my best to put something out soon

I was shocked when I found that out, always assumed it was one of the changes, I believe there’s some cool BTS footage of it in the ‘From Star Wars to Jedi’ documentary.

I love that kinda stuff snooker, keep it up

WOW those ideas are genius guys, if we talk about the age of consent a bit more we could revolutionize the fanedit community!! -_____-

Watched it recently, it’s much better but on a personal subjective level, it doesn’t quite cut out enough for me. Biggest problem is that you left in the kids at the end which now make zero sense in the context of the film. On a technical level it was masterful as always though.

I used to agree with you, but just assume a passage of time. The kids don’t have to be from Canto Bight, they can just be kids anywhere inspired by Luke.

I just prefer the original formula of all the other films where we end each episode with our protagonists together gazing at something, rather than setting up future films in the middle of a trilogy.

Watched it recently, it’s much better but on a personal subjective level, it doesn’t quite cut out enough for me. Biggest problem is that you left in the kids at the end which now make zero sense in the context of the film. On a technical level it was masterful as always though.

What scene are you on now?, just curious 😃

The whole concept of editing in order is hilarious to me. Maybe I’m just weird.

It’s the hardest way to get through an edit, sometimes you have to jump around and edit different scenes to move on

No offense guys, but you were the ones who were insulting him and berating him behind his back, I’ve just gone through this thread after the link was posted on a Star Wars Reddit (SaltierthanCrait) thread, he isn’t forcing anyone to give him money, or pay for the edit, if people want to give him money in appreciation for the work then that is their prerogative.

Does anybody have any better names for Christopher Lee’s character than Dooku? Something that doesn’t make me giggle like a schoolboy?

Darth Tyranus is a canon one

It’s not a mobile problem since I was on PC, but yea the imgur link is better, could be used with DrDres color correction tool maybe

This might be useless info but I found this very good quality pic of the original senate scene, I couldn’t find where it originally came from but I’m hoping that there’s a clip of it in this quality.

This looks awesome, just wondering if the alien subtitles are burned into the frames?

Jeez this went from us questioning a man’s methods to a rivalry between communities! Not that this makes any sort of difference but like DAMN dude.

The Trade Federation has slowly been taking control of the frontier worlds on the edge of the Galaxy. These worlds are too small and out of the way for the Republic Senate to care.

When the Trade Federation attacks Naboo, a big player in the Senate, this is seen as a declaration of war with the peaceful Republic.

In the ten years between films, multiple clone wars have been fought against the Trade Federation, who have now become the Separatist Alliance.

Episode II’s opening bombing could be recontextualized to be the Separatists’ first attack on the capital, showing that they are becoming a much larger threat. Padme was specifically attacked because she was the ruler of Naboo during the first film.

This would also add a motif to the trilogy of revenge.

THIS is literally the concept that my edits revolve around, I got clips and stuff coming soon

Yeah I don’t think I’ll be watching his final versions, I do like some of his ideas for reference and inspiration that skilled editors that I trust might use later on.

Wait, is the whole edit only going to have 2 channel stereo as the audio track? If so, that’s very disappointing news.

In his clips you can see he’s only using a 2CH source, he calls himself a proffesional editor but as an unprofessional myself I find his techniques quite questionable

I would agree with the whole patreon thing BUT he’s not even mixing his audio properly, his main source is 2CH stereo so in short it’s gonna sound super drowned out in many scenes due to his rescoring techniques and the levels will probably be all over the place.

I was more talking about ones I’m willing to sacrifice.

In that case I’d remove yoda/sidious because yoda fighting an old man is a dumb concept and it detracts from the fight that actually bears weight. I’d also lose windu/sidious because it’s super goofy, then I’d trim the boring parts out of the grievous fight