Is it an original orange or a special edition like a tangelo or a clementine?

I wish George would have sold Lucasfilm right after Return of the Jedi just so the prequels and kingdom of the crystal skull never existed. Just imagine how great a proper backstory would have elevated the Original Trilogy. We probably would have a few more decent Indiana Jones movies too.

Sexist and racist attitudes still exist, they just hide behind pseudo PC terms that are used negatively. The fact that some can’t deal with other races and genders being treated equally is something they will have to deal with on their own as the world becomes a more progressive place. Some day their comments will sound as backwards as the hate speech made during the civil rights movement.

But if you think the PT is better made, or do something insane like give the PT a 5/10 and RO a 1/10, you’re just trolling for reactions.

TFA plot is way bigger mess than any PT plot. It is simply horrible. So ranking TFA below PT is completely natural in this respect. When you also count in the complete lack of originality in TFA, the judgement is clear.

Stepping in poop, fart jokes, and senate negotiations. Then everyone fights.

JJ has said R2 wakes up when B-B8 tells him he has part of the map.

“I have to say that I felt George’s group of six films had more innovative visual imagination, and this film was more of a retrenchment to things you had seen before and characters you had seen before, and it took a few baby steps forward with new characters.” - James Cameron about Episode VII

“I start to see things I recognize. It’s being very respectful of first two films. Then all of the sudden, it just swerves. And now I’m going on a journey. I feel like the franchise has been reinvigorated, like this is a renaissance.”- James Cameron regarding Terminator Genisys

He should just get busy putting True Lies and The Abyss on blu-ray and leave the movie reviews to others.

A small child is somehow the only human who can pilot a podracer, no problem. The same child somehow is ably to fly a combat mission and destroy an entire base ship, no problem. Luke also becomes a combat pilot with no combat training, no problem. Rey pilots the Millennium Falcon through the interior of a ship that she has been scavenging throughout for years and all of a sudden that is impossible.

Somehow it’s a problem when Rey, who has spent her entire young adult life literally fighting for survival with a melee weapon is able to defeat Kylo, who himself has incomplete training and is emotionally disturbed having just killed his own father and has also been shot by Chewbacca’s bowcaster, a weapon that has been shown to send stormtroopers flying.

Rey was able to do a mind trick without even seeing it done or being trained regarding it, but she did experience Kylo reading her thoughts, so she isn’t entirely unfamiliar with the idea of manipulating with someone’s mind.

I don’t see that Rey does anything out of the ordinary. She is a pretty awesome character and I can;t wait to see what happens to her, Finn, Poe, and Kylo in the next one.

Then if Disney/Lucasfilm aren’t going after those actually selling the despecialized versions on ebay, they why not just host the free downloads right here on this site instead of hard to access torrent sites?

I absolutely love The Force Awakens and I honestly wouldn’t change a single thing about it. TFA was exactly what Star Wars needed. It is the perfect mix of old and new.

With that (vague) statement Kennedy unintentionally advertized Harmys Despecialized Editions. That guy who sells them illegally on ebay will have a prosporing business year. Even the prizes for the GOUT DVDs could rise further.

Not to derail the thread, but how is he able to sell those on ebay without any repercussions? If it’s that out in the open why make people jump through so many hoops to download them?

Just as it took multiple talents to create Star Wars, it was multiple things that contributed to what changed with the special editions and prequels.

George Lucas deserves the lion’s share of credit for Star Wars. Without him, it simply doesn’t exist. There were numerous other talents that contributed greatly, but it was Lucas at the center.

I do not think he made the original Star Wars for 12-year-olds as he has stated. It was a fun movie for all ages. By the time we get to RotJ however, we see his ideas change regarding what Star Wars actually is with the arrival of the Ewoks.

The prequel trilogy can be fun for all ages too, but I can see it being made mainly for 12-year-olds as he previously stated. The special editions add that prequel type of humor to the Original Trilogy. What we end up with today is kind of like two versions of the entire saga. If you grew up on the unaltered versions, then the prequels probably didn’t fit your idea of what Star Wars is. You probably liked TFA and R1 more. But if you grew to love the special editions, then the prequels fit right in and it is TFA and R1 that feel foreign to you. And of course there are some that just love it all and a myriad of other combinations and preferences.

Lucas has said before that he went from fighting large corporations to make his movie, to actually becoming a large corporation himself. By the time he made the prequels, I don’t think he was a receptive to the same team effort style that was responsible for the original Star Wars. I am sure there had to be someone that asked why they computer animated clone troopers in AotC instead of just putting people in suits. I am not sure what the response was, but we see the results.

jar-jar type humor has no place in what I consider Star Wars to be, but I suppose after 20 years of the special editions and almost 20 years of the prequels, fans of that style are entrenched and here to stay. I am glad none of that is in TFA or R1, but who knows what the future holds. There is however something from the past that is missing, the Unaltered Original Trilogy. There is room in the Star Wars universe for everyone to like whatever they choose. All those who want the Unaltered Original Trilogy are asking for is a seat at the table.

I still appreciate and respect Lucas. The special editions and prequels didn’t change that one bit. My opinion of him did change slightly however with the suppression of the unaltered versions and the GOUT. Some of the things he said hurt. The Lucas who said those things and the Lucas who addressed congress regarding film preservation and how they are important pieces of history are most certainly not the same Lucas. That is why such preservation is so important. We can’t allow our cultural history to be rewritten.

George has done far more good than harm. If you love movies, then you owe Lucas a measure of gratitude. His attempt to erase the unaltered versions is unfortunate, mainly because I consider them a huge accomplishment and something to be increasingly proud of. Fortunately we have some good people out there fighting to preserve it for those who want it. Hopefully soon it will be available for the mainstream audiences to appreciate as well.

The mainstream internet media have picked up on the Kathleen Kennedy statements:

They all agree that Kennedy was referring to any alteration of the final cut, including restoring previous cuts of the films. I suppose this may create some buzz on the twitter feeds, so let’s hope for a more extensive statement from Lucasfilm/Disney on the subject sooner rather than later.

I don’t believe we will see them release the unaltered versions any time soon, but the question was very poorly worded. It is not definitive in the least. The issue has still not been addressed properly in my opinion. 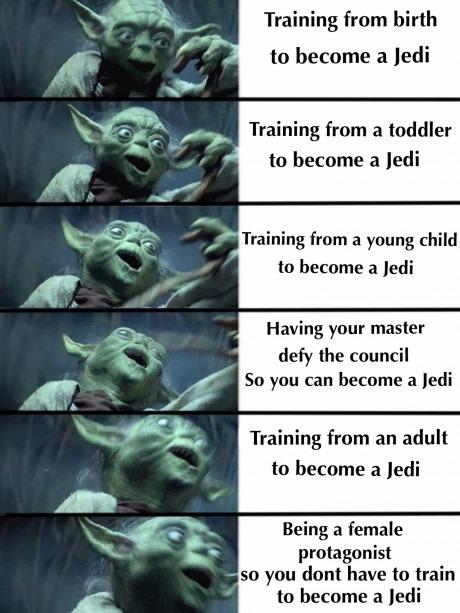 Always with Yoda it cannot be done. Fail.

Now more than ever we should thank Harmy and others who have worked so hard to preserve a piece of history. We are very fortunate to have them around. They should be knighted as Jedi and have their own holiday.

May the Force be with Harmy then.

Hey, look at it this way. When Harmy finally gets around to finishing his 1080p re-do of the despecialized trilogy Disney will have something even better: a 4k transfer of the real thing.

Their 4K scan will be of the special editions. Harmy is the best we can expect for the foreseeable future. I feel better now that I’ve accepted that.

May the Force be with Harmy then.

No, there is another.
Time for speculation about May 4th and May 25th.

Their continued silence is infuriating. How can you celebrate the release of a movie that isn’t available to watch anymore?

You have done that yourself.