I live in the UK so scanning would be about £600 per reel. If there’s any way to fundraise to get someone from the US to buy this it would be greatly appreciated as I think shipping to a US address would cause to many issues from here.

I have a scanner in London that could do the entire scan for less than £600, but it’s not worth sending the film from the US to the UK just for scanning. It can be done to higher quality in the US - join my discord channel and send me a message there.

This is the type of quality you can get out of the Gugusse Roller.
https://www.youtube.com/watch?v=qVFr5I7Tht4

Which is very rough on film and cannot handle 1,000ft reels let alone 2,000ft reels. The only things that DenisCR can scan on it is trailers and other similarly short reels like music videos, snipes, and theatre ads. The Gugusse Roller is a Raspberry Pi project really, not a film scanner.

You can scan it in the US if you buy it (so no import charges and postage should be more like $50). Scanning about $350 (on a real scanner).

I compared on a D56 high CRI lightbox directly next to monitor showing the two earlier 1080P project scan .mkv files. Not sure if it is because the print they used was more faded out or maybe processed differently in the film lab or the way the scan got done or graded. (that said still all props to the original 1080P JP project!)

It’s nothing to do with the quality of the print, the scanner that was used for that scan produced duller colour due to having a low CRI light basically.

How much more superior is it going to look compared to the uhd?

It won’t look better, it’ll just be a more faithful to how the print looks (virtually identical to the print if you were making a 4K DCP from the scan and projecting it in a cinema).

Jurassic Park is being done as it is here and I can confirm it is absolutely professional quality.

Join my Discord server and send me a message.

They haven’t scanned JP1 yet, but it’s being scanned in a very different way to much higher quality. That said Retrofilm looks like they’ve improved the quality of their scanner based on that clip which is wonderful, it’s also a real-time scanner so it scans very fast compared with how these ones are being scanned.

Re: your last point I remember seeing Jurassic Park at an IMAX back in the 90s and it looked terrible because they were taking a regular print that was definitely not meant to be blown up that big and doing so.

That shouldn’t happen during the original run, sounds like they somehow ended up with a multiplex print.

Problem has always been the cost-cutting bean counting tight-ass distributors. If they can save a buck surrendering QC on multiplex theatrical prints they do. The optical enlargement uses Japanese made printing nikkors optics (look them up, and how much they cost - used let alone how much they were brand new back in the 70’s), so you can absolutely go to 65mm/70mm or as is the case with Terminator II Super35 to Scope while the film stays razor-sharp, it’s just a matter of how the final prints are made and the budget. The HQ 35mm ones are called show prints and are designed for special shows or theatres with very large screens.

You’re absolutely right though about the large screens. An average print can look better in a smaller auditorium, but it the places that don’t do any masking will ruin the experience with window-boxing or letter-boxing on the screen and sadly most multiplexes are like that now. They must not understand how it ruins the experience!

I’m not a fan of these films but I’ll clear up a couple of things:

It’s shot on 35mm, so it’s absolutely 4K+ if you’re scanning the oneg. 2K film-out is 2048x1556 and that was the standard since Terminator 2 and Jurassic Park. Before that I believe all CGI had not been attempted to be printed full-frame, that is to say that Abyss and anything older had CGI printed that was then optically matted into the negative.

The Fellowship of the Ring was shot photochemically on 35mm film in Super 35 format using a variety of Arriflex, Arricam, Mitchell, and Moviecam cameras with Zeiss Ultra Prime and Angenieux Optimo lenses. Only about 70% of the film was finished as a Digital Intermediate at the time, as the process was then new and still evolving (the other 30% was finished traditionally on film). For this new Ultra HD remaster, Park Road Post (a New Zealand post facility owned by WingNut Films) went back and scanned the original camera negative in 4K, then scanned the VFX film-out elements (for VFX shots that were finished on film) in 4K, and upsampled the VFX shots that were finished digitally (in 2K resolution) to create a brand new 4K Digital Intermediate at the proper 2.39:1 aspect ratio.

That’s describing the type of CGI in Abyss and older films: VFX that is rendered and then optically matted into the film. Also it doesn’t matter how much was DI and how much wasn’t, the VFX doesn’t set the resolution the background frame does.

The resolution of the final prints will vary. Terminator 2 projected off an original 35mm which I have seen on a huge 70ft+ screen (I’d have to do some digging to find the exact size, but it’s at the size where the difference between 35mm and 70mm is very obvious even with the sharpest of 35mm) and it is clearly 1.5K or lower true resolution perhaps as low as 1K. Most 70mm makes 4K look like low resolution. So as with anything with prints, it’s a matter of YMMMV depending on where it was printed, whether the cinema had a large screen and demanded they print it to a higher standard than a multiplex cinema which was the standard at the time (and sadly still is). So for example it’s possible to print your standard quality for multiplexes and then do some at show-print quality for the Theatres that still had large screens.

Just curious, but in these situations, do scanners at least return your film? I’m worried the answer is no, which is awful.

In this case the film is owned by a friend of the scanner.

Join my Discord channel and send me a direct message I’ll be happy to tell you more about “bad” scanners and the kind of things that can happen.

Higher color gamut alone would benefit it and HDR would be icing on the cake.

Film doesn’t have a “colour gamut”, it’s basically got intensity of reds, greens, and blues which is represented by each corresponding resistive dye layer (magenta blocks green etc). Film has a bit_ more in the reds and oranges and a little bit more in cyan blue and yellow compared with Rec709, but that’s it: 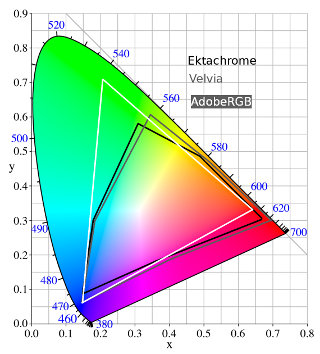 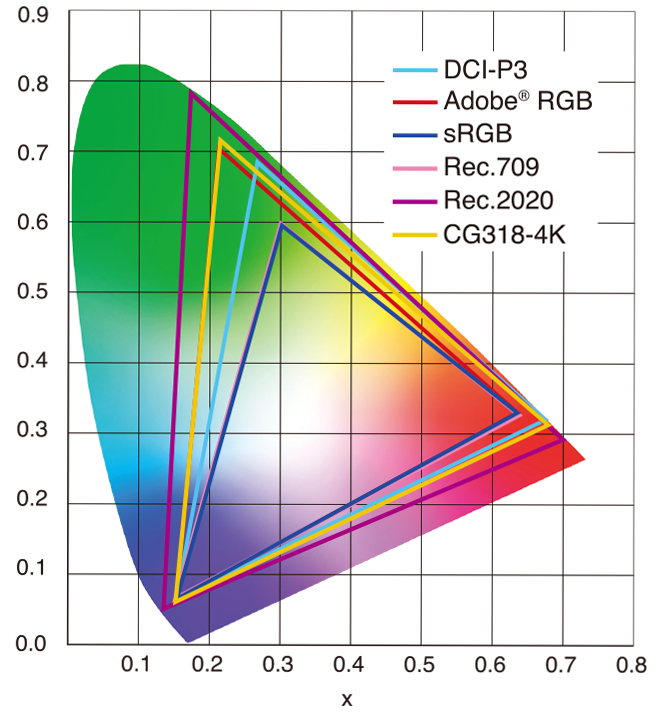 The print I believe is here just needs to be scanned.

Not yet but it will be.

So basically, 2048x1230, then? (BTW before Jurassic Park wowed and amazed with its effects, T2’s CGI was, indeed, rendered at 1K, specifically 1280 pixels wide, with one shot during the T-1000’s death scene being fuzzier because it was finalized at half that resolution.)

It was probably ~2048x1108 or it may have been anything down to ~1920x1038. The printed resolution is 2048x1556, but they don’t need to print any vertical overscan for CGI VFX. Shrek was rendered at 1828 pixels across, but that’s very different because like Toy Story it’s completely CGI so you’re printing directly to how you want it hence you don’t need to use the full horizontal area available for 2K printing (vertical and/or horizontal overscan).

No they weren’t. The CGI was rendered and printed at 2K, after which it was optically composted onto live-action shots. It’s possible that for some shots they did an optical reduction for compositing which would increase the actual resolution of the CGI beyond 2K on the master negatives.

The effects would have looked horrible at 1280x768. There’s a sweet-spot for resolution and detail when it comes to CGI VFX being integrated to live-action. You want the detail on the final print to roughly match what you get from film. They also have to be photochemically colour-timed just like regular film so that the shots integrate more seamlessly.

Depending on the complexity of the shots they took up to 12 hours per frame to render in 1991/1992. There’s about 4 minutes of VFX and it took about a year to render all up.

The CGI was printed at 1.85:1 just like any other film of the time.

Definitely excited to keep track of this project. Saw a 35mm scan of the original JP the other day and I can’t wait to try and watch it on a projector. I may be in the minority, but I also really love JP3, so knowing that someone is going to show it some love by preserving it warms my heart!

There will be a massive improvement over the old scan for JP1.

If you want to join my Discord NCFan I can make a project channel for you. And yes your scanner is on there. 😉

If the Disney classics are important to you - join my discord, simple as that.

We can get it done, won’t be cheap (like I said 5 years ago) and will take time.

We have the cinema DTS you don’t need to worry about that, I would suggest you join my Discord server and mention you’re interested in the JP project. We’ve got a sample of the scan quality there. They’re using a high-end setup for the scans.

The 4K disc release of Jurassic Park has quite a bit of DNR. Is it from a 3D conversion?

Most likely it would be.

I don’t own the full movie, I just own some cut cells I bought off eBay. Like four frames of it.

Do NOT buy cut frames from cutters. If you want moviestrips they can be made-to-order such as by this company.

It may be possible to do a professional quality scan soon, head to my Discord server if you’d be interested.

If someone is interested in contributing to this or placing a bid (ideally from a UK account) please join my Discord server we could organise something there.

Guys please stop sending me PMs about this. I don’t have a link any more and it’s not my scan. Also it’s 2022 not 2018 times have moved on. In 2018 the scan quality on this project was good. Note: good, not great. If True Lies is important to people you should look for a new print and get it scanned professionally. It can be done affordably at quality that will wipe the floor with the old scan.

I can get another print as well. Which may be required depending on the condition of the one they have. 😉

I’ve got a private channel set up now on my discord server for this, so anyone who’s interested in this project is welcome to head over there if they’d like as well. The permalink is https://valeyardfilmarchives.org/discord/