kchrules, was there any progress on this one?

Very exciting! Thanks for sharing this!

Man, I dig that regrade! Talk about déjà vu 😃
The teal Blu always bugged me.

The Day the Clown Cried 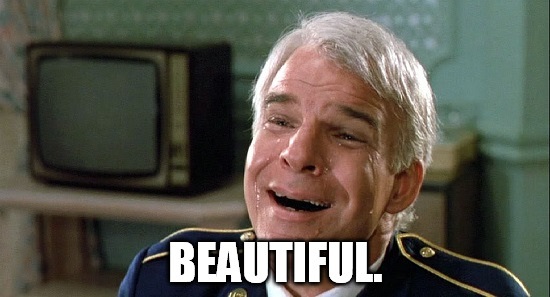 I’m just… FRUSTRATED by the pressures being pressed on me both inside and outside the fan restoration community at the same freaking time.

dude, you had made a gazillion threads on fanres announcing a gazillion projects and had little or nothing done. when people there got tired of you announcing like a broken torrent tracker, they took you for a troll and deleted all but one of your threads. then you managed to get that one locked also. yet, you continue the same thing here. believe me, I got nothing personally against you, but it seems to me you spend more time writing threads to explain what you’re going to do than actually taking the time to do it. the only one pressuring you is YOU.

thanks for v3 link. effort much appreciated!

I like the improvement in third CC and looking forward to it. Since your source is grainy I’d suggest you to utilize full capacity of BD25 if possible, as your first two ~11GB renders have some macroblocking here and there.

But it looks like you have some severe lossy compression in the lineage here. It shouldn’t look like this from good analog recording. Or you are somehow recording the Dolby Surround track instead Analog mono, idk…
It should go all the way up to 22kHz. 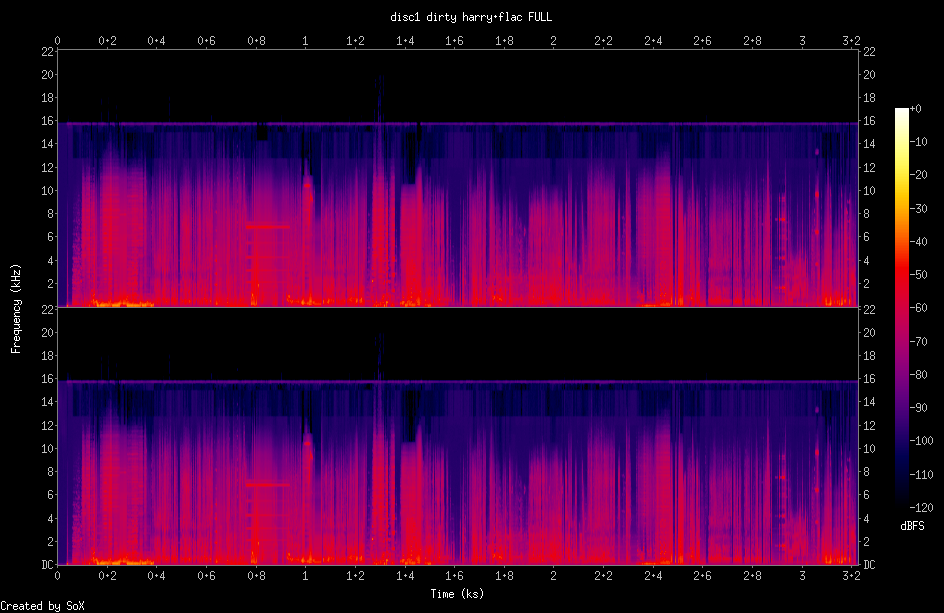 kchrules, you rule! no rush with the audio.
That’s a nice comparison. Funny to see how different editions have different gate weave to them, while blu-ray is more stabilized, and looks somewhat sterile, compared. It made me dig up old chewed up VHS (recorded from TV some 25 years ago) and a clunky VCR. The machine worked but the tape is near gone, I managed to get a few glimpses enough to confirm my memory tricked me - the titles are indeed white and positioned just like the '83 LD but I noticed very different pan&scan in some shots, most notably when Harry is putting the envelope in his pocket - he’s more to the right of the frame, then when he’s reading Scorpio’s note stuck to the antenna - the shot is all the way left revealing just the tip of his nose, until it pans right just a second before he says “Jesus”. So there it is, variations galore.

Thanks for the links once again, kchrules. These rips have too compressed audio - aac @ 192 kbps. Is there a way you can record uncompressed .wav at least from the two LDs?

One peculiar thing I noticed: - the font. I guess it was done separate for Pan&Scan LD but I’ve never seen opening titles with white lettering! What I remember (although not 100% sure now) being shown on TV in former Yugoslavia had opening titles with completely brown lettering, like the word “Dirty” on VHS here. I always thought they changed that to yellow with drop shadow only for later DVDs but now I see that 1979 VHS had the same thing 😃 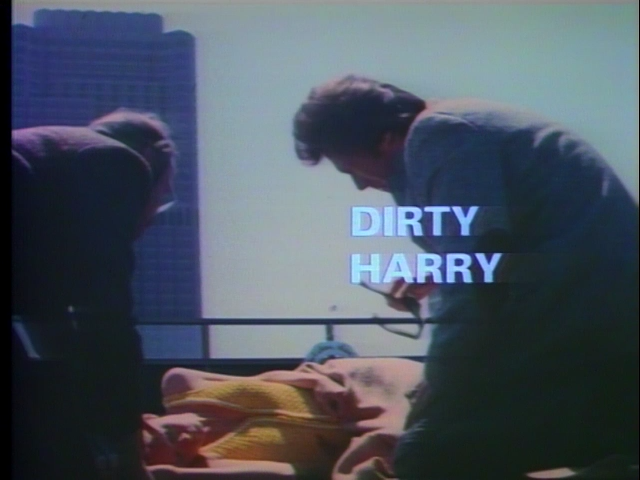 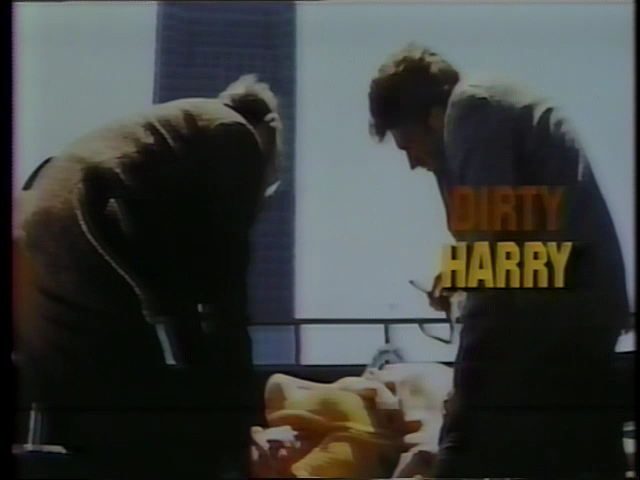 Yes, the 44 magnum sound is there at the end of the opening titles. I don’t have a myspleen tracker account, but I have the Magnum Force LD, Dirty Harry VHS and LD on my MEGA account. Will upload the JP VHS as well soon. I don’t know if we’re allowed to share links on the forum but I can PM them to you and anyone who wants them

Sure thing, mega is OK, PM the links. Thanks a bunch!

In terms of original mono, I believe I have the theatrical mono of both Dirty Harry and Magnum Force.
I have the original Rental Tape of Dirty Harry from 1979, I believe it has the Mono, albeit not great quality. I also have the 1983 Pan and Scan Laserdisc, which might have the mono as well but higher quality.

Here is the Japanese laserdisc of Magnum Force. It has burned-in Japanese subtitles, but has English audio. I also I have the Japanese VHS, which is the same as the laserdisc.

What about Magnum Force opening title? Does it have a .44 sound when the gun shoots at the camera at the end?

I’d be interested in both Dirty Harry and Magnum Force mono tracks if you can rip them.

Haven’t done it myself but I’ve read somewhere that Tuneskit does the job.

Mission Caligula
Alexander Tuschinski’s 10 year quest to research Tinto Brass’ original ideas for Caligula, culminating in the discovery of Brass’ 1977 workprint - showing the film as a dark political satire, unlike any version ever released.
https://vimeo.com/241947493

great podcast from several days ago with tuschinski and holland on docu and restoration, to whom it may concern!
https://www.spreaker.com/user/impossiblefunky/epx148-missioncaligula

just stumbled upon this:

“Long cut of the original film The Shining containing the scene in which Wendy, played by Shelley Alexis Duvall, carries Danny, played by little Danny Lloyd. These cuts, given by Kubrick to D’Alessandro, are particularly rare because the director notoriously burned all the leftovers at the conclusion of the editing.”

Had a thought of this several times but was too lazy to actually go on and try it out 😛 Well, partly lazy, partly thinking it would be too distracting if different frames moved around relative to one another. But I totally agree on analyzing frame composition and cinematography aspect (ok, there’s a pun) of it. I’d sure like to see your “Matrix” in… wait for it… Undefined Aspect Ratio.

I’ve uploaded my reconstruction of original gone in 60 seconds score and closing credits to that favorite organ site.