I’ve always thought an interesting way to do the prequels could be a miniseries, since the characters age up between movies, and Anakin even changes actors, it could be reminiscent of something like HBO’s House of the Dragon.

I really like your prologue and epilogue idea though.

It looks a little oversaturated for my preference; the sky in particular is bright blue which doesn’t seem right for a desolate desert planet. There’s also a sense that everything is “perfectly” colored at all times from shot to shot and scene to scene regardless of lighting conditions, which looks a little bit artificial to me.

That said, if that’s the look you’re going for, it looks very consistent. You did an excellent job blending the two sources and matching the colors.

Photo from the same area in Tunisia; 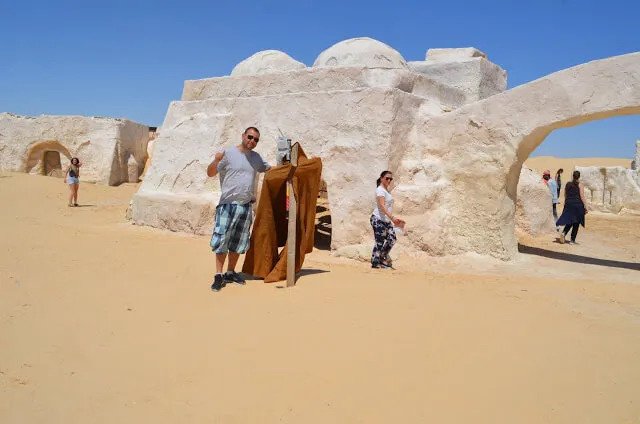 Looks pretty “perfectly colored” to me

It looks a little oversaturated for my preference; the sky in particular is bright blue which doesn’t seem right for a desolate desert planet. There’s also a sense that everything is “perfectly” colored at all times from shot to shot and scene to scene regardless of lighting conditions, which looks a little bit artificial to me.

That said, if that’s the look you’re going for, it looks very consistent. You did an excellent job blending the two sources and matching the colors.

Remembered this thread and decided to have a go at adding fitting score to the scene (taken mostly from Episode II).

The sound effects are unfinished, the biggest thing I need to do (other than stabilizing some of the handheld shots) is extend the final shot so that a wipe can work. I’m mostly happy with how the music sounds, but some of the transitions could use some tweaking I think. Plus Anakin’s theme at the beginning could be replaced with more ‘scene transition-y’ music.

Wow, I think this score works pretty well. Hopefully it sparks more interest in this idea.

I personally like Anakin’s theme at the beginning because I think it serves as a bridge to the previous movie and telegraphs to the audience that this young man is the same boy we met in that movie. I just wish Palpatine said something like “Master Kenobi and his padawan”, since it would transition us nicely into the next shot.

The Oscillator confrontation was my first attempt at that sort of Force power. The Poe interrogation was done after that scene and I feel it was a lot more successful because it was better integrated into the surround mix, but for V1 I never went back and adjusted the Oscillator scene. For V2 I will definitely be making it more subtle and well-integrated. I don’t want to remove it completely, because although it feels obvious that Kylo is using some sort of power to interrogate Han based on the Poe and Rey interrogations in the edit, it wasn’t obvious in the original film at all (at least to me) and came off as psychopathic rather than conflicted.

I will also take another look at Jakku 😃

Okay, that makes sense! Looking forward to it.

Is there any chance you would reconsider the voiceover before Kylo Ren kills Han? I understand what you were trying to do, but it felt a bit on-the-nose for me. I thought the implications of the scene were clear without it.

Do you also plan to revisit the color grading on Jakku at all? I found it a bit inconsistent.

Muxed these together with the “D+” series releases from OhTeeDee and I think that will be my favorite way to watch these films going forward (or your custom special editions whenever I feel like a little cgi in my Star Wars). Great work!

The duel is edited in multiple pieces: why not keeping that structure to embedded it into the intro dction of the movie?

I think this would be at odds with the editing style of the rest of the movie.

It’s funny reading the old posts in this thread. You have people saying that no one cares about the prequels or the minor changes made to the DVDs and now you have people paying hundreds of dollars to acquire and scan 35mm prints. It’s wild how the perception of these movies in this community has changed.

That way it could almost play out that Obi-Wan has deliberately scheduled some training to get Anakin out of awkward teenager mode and clear his head.

You’d have to create a new establishing shot wholecloth. There’s also the fact that the training scene starts with Anakin already there and Obi-Wan entering to meet him. I’m not sure you could cut it together in a way that feels coherent.

Thank you so much! Once you provide it, I will sync it to my PAL DVD upscale project as well, at least until this project makes it obsolete.

For the prequels, I bought the original DVDs and the 2011 Blu-Rays.

For the sequel trilogy, I bought the original Force Awakens Blu-Ray, the 3D re-release (for the director’s commentary), and the original 4K releases of Last Jedi and Rise of Skywalker

I also bought the multi-disc 3D Blu-Ray for Rogue One, never got around to buying Solo.

I’ve bought all seasons of Clone Wars on Blu-Ray, aside from season 7, which is exclusive to Disney+. Seasons 1-5 I believe are international (UK?) releases from Amazon but they are region free.

I also own all seasons of Rebels on Blu-Ray.

I will probably buy the 4Ks of all the movies at some point, but Disney+ and the various fan restoration projects for the OT and PT make it less of a priority.

The new restoration looks beautiful and got rid of the extreme green tint they added in 2008 to match the other two movies. I have no idea how accurate the colors are though.

LD audio is better than the DVD? Do you know something about their history? I could try my hand if the two need to be blended somehow, such as surround channels being more dynamic in the LD.

I believe the LD audio is actually stereo, so it doesn’t use the surround channels at all. However it’s supposedly the original theatrical audio mix, whereas the DVD mix was a new one done for the DVD release. The Laserdisc audio is also supposed to be nearly lossless whereas the DVD has a compressed AC3 mix. The best option would be to include both. I’d bite the bullet but:
1.) I already spent too much on this movie importing the PAL DVD
2.) I don’t have a laserdisc player, or any of the equipment I would need to properly capture the audio.

There’s also the issue of establishing shots. I don’t recall if the deleted Senate scene has its own establishing shot, but it would probably require one. The office scene would need one, then the Jedi Temple. Since that’s three in a row, it makes sense to cut directly from the training to the apartment interior at the earliest moment with Jar Jar.

I think there is an establishing shot for the deleted scene on the DVD, but it’s very clearly temp, just concept art that’s been animated a bit. I believe Hal uses a shot from ROTS in his edit, which doesn’t bother me.

Yeah, and since the elevator scene was originally filmed during reshoots, this would be replacing one reshoot with another.

I think if you cut the elevator scene, you have to keep JarJar walking up and greeting them at the elevator. Otherwise I think it might be too abrupt of a transition, but I might be wrong.

From what I understand, several recent blockbusters like Endgame are shot in 4K and even 8K, but the VFX is usually rendered at 2K due to the ridiculous render times 4K would take, so the movies mostly have a 2K master that they upscale to UHD (so the HDR is the actual deal maker, as some have mentioned earlier in this thread). I wonder if AotC and RotS wouldn’t be that different of an experience in this regard?

You don’t have to guess, both AotC and RotS have gotten official UHD releases with HDR. Personally for AotC I prefer the sharper image and more natural colors of the HDTV preservation, but I’ve heard RotS looks good.

Ideally, a lossless capture of the Laserdisc audio, but I haven’t been able to get my hands on it. I’m not sure if anyone has done a preservation. The 5.1 AC3 mix on the DVD is fine, and I’d recommend including it as well, but it barely takes advantage of the surround channels anyway.

I really like that Neverar. I will try it out.

My only concern is you lose “I haven’t seen her in ten years master” which establishes his longing for Padme but I guess he whines about that later anyway.

I remember hearing that that line was new for the DVD back in the day.

And the cinema DTS tracks I have agree.

Well I’m pretty sure that Schorman’s cinema DTS is from the 35mm version. There were definitely some audio changes in the digital theatrical version, such as Padme’s “Yes!” being changed to “Uh-huh…” when she’s rescued by the Clone Troppers.

Just in case anything thought I had abandoned this idea, I haven’t. I took a stab at implementing RogueLeader’s suggestion, along with some preliminary color grading, and pitching up Anakin’s voice. A ton of work still needs to be done on the foley and score for the duel scene, but here is a new test video: https://drive.google.com/file/d/1lQvxG9rR0zDwwI6yCnMCqBs8fUDLNOXh/view?usp=sharing

Do you plan to incorporate this scene to your AotC Sanded Down fanedit? It would be quite cool.

Honestly I’m not sure. It really depends on how convincingly it can be integrated into the movie. I’m not really happy with the color grade I did, and obviously the foley still needs to be rebuilt, which I haven’t tackled yet. I’d also like to add more JW score to the scene.

Even so, it may not be enough to make it feel seamless.

So? I honestly don’t remember why he was banned but regardless, there’s no reason Hal can’t credit him for his work.

Rey’s parents are nobodies and she isn’t Palpatine’s granddaughter. Sorry, three years later I still have a hard time swallowing that one.

My head says Shaw, my heart says Hayden. I was a prequel kid and grew up with the 2004 DVDs. I honestly teared up a little bit the first time I saw Hayden in ROTJ because it felt like a full circle moment.

But, ultimately, the films are more effective when watching in release order, and in that case, Shaw makes more sense.

polevoi said:
The first Kenobi vs. Vader showdown still bothers me but this is a problem inherent in the material and probably beyond the abilities of an edit to correct. Why doesn’t Vader use the force to pull Kenobi back through the flames or levitate him up and over the flames? Or the stormtroopers could just charge up the sides of the gravel hill and get to the droid (who wasn’t exactly moving fast), take it out, and recover Kenobi. I get that the intent is supposed to be that Vader is in some kind of PTSD moment with the wall of flames (at least I think that is supposed to be the intent–I’m not sure what else would make sense), but this is a digression that relates to the source material.

I interpreted this as Vader playing with his food. He doesn’t want to kill Kenobi just yet, he wants a challenge. I felt like he was making a choice in that moment to let Kenobi regroup with the confidence that he’ll have a more satisfying opportunity to face him later.