Some pretty bad damage from the snow storms and winds - this road is a couple of miles from where I live and about 200 metres has collapsed onto the beach. 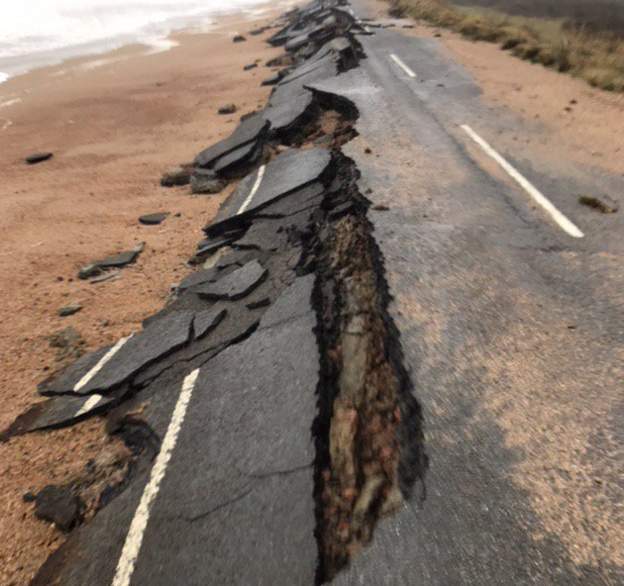 Vulnerable people have had to be evacuated from a nearby village too. The worst that I’ve suffered is that our bird feeders have blown away and the roads have been closed so we can’t go anywhere. Still got food and power so I’m feeling very fortunate right now!!

I was hugely surprised when Mask of the Phantasm was released on blu-ray last year but now we’re getting Sub Zero?! Wow, good on them for putting all the series episodes which featured Mr. Freeze on as extras too!

Posting here because I couldn’t find a more suitable thread!

This is a very interesting read. If the article is accurate I don’t think the status quo can hold once this case is settled. What do you guys think?

Decades ago a certain man made a film about sharks which defines the genre to this day. So much so that it’s impossible to watch a shark movie without comparing it to that classic, flawless piece of filmmaking. That man was, of course, Renny Harlin and the film was Deep Blue Sea.

Putting aside all comparisons, this story of two sisters whose cage dive goes disastrously wrong and leaves them trapped at the bottom of a shark infested sea with limited, and rapidly decreasing, air actually works really well. It’s well played by Mandy Moore and “that one from the telly whose name I can’t remember right now”. A bearded Matthew Modine shows up for a bit and does his best with what he’s given.

The sharks are superbly rendered cg (not that I’d ever claim to be an expert on such things but they look very realistic!) and although they are of the Hollywood “HUMANS, I KILL YOU BECAUSE NOM NOM!” variety they aren’t overused and feel like a real threat.

Way better than I was expecting and a fun way to spend a Saturday night in a switch-off-yer-brain kind of way.

Whether or not you appreciate the story choices made in the last act will no doubt have a big impact of your opinion of the film because it’s, yeah, it’s a bit of a slap in the face. Personally, I liked how it went because I really wasn’t expecting things to turn out the way they did. A claustrophobic, tense and scary 80-odd minutes.

I went to Sweden for three weeks at the beginning of the year, didn’t post here at all and nobody noticed!

Don’t look! Don’t any of you look! Just trust me, it’s all kinds of wrong.

You’re weeks too late with this warning.

Don’t look! Don’t any of you look! Just trust me, it’s all kinds of wrong.

I don’t know what to do in here now that my current age was correctly… predicted.

I like yhwx. He’s got a gentle way about him and he seems like the kind of chap who’d never deliberately do anything hurtful and if he did, he’d genuinely feel bad about it. He can sometimes be a tad passive aggressive but that’s not necessarily a bad thing. I’d like to think that if we were in each other’s circles in real life we’d be pals.

Yeah… intelligent, caring and he likes Star Wars. I give him a 9 out of 10 (I deducted a point for the smell.)

I’m leaving the public areas of the forum for a while.

Be well, Warb. My unsolicited advice is to just lurk around for a while and only post when it’s something you really want to say. Just as long as you don’t completely abandon us here - you’re a valuable member of the forum and one of the few who has been here for over a decade! 😃

Here’s the most specific and detailed prediction yet!..

Inspired by a few recent clickbait headlines and some general noggin work I predict that the next animated Star Wars series will take place in the years leading up to Episode VII (similarly to how Rebels precedes Episode IV.)

The main characters will not have been seen before but will consist of a young person, a teen, an older man or woman or both, at least one alien and a droid.

The stories will have The First Order’s rise to power as a backdrop and we’ll occasionally get cameos from some of the characters from the sequel trilogy and canon novels from that period.

We will see Maz Kanata obtaining Luke’s lightsaber (and probably Obi-Wan’s entire chest too.) We’ll see Snoke, Phasma and Hux getting up to no good and we’ll likely see Han and Chewie in an episode too. Luke and Leia will no doubt be encountered in some way and more than likely Lor San Tekka will turn up too.

The show will last for three seasons and will begin airing in 2019. The trailer will air around Christmas this year and the first episode will be shown at Celebration 2019 (which I’m predicting will take place in New York) and the full season will air from September next year.

Finally, I predict that when Dave Filoni introduces us to this new series on an episode of the Star Wars show he’ll be wearing a hat.

I liked the sighs.

I like how you see practically everything in ways that range from “a little bit different” to “whattheactualheckisthatboysmokin’?!”

I dislike the effect some of the stressors you experience here have on you.

I dislike how stubborn you appear to be.

I LOVE how passionate you are about things that matter to you.

It’s a bit weird and it ultimately might be a very niche interest but I’m all for it! What an unusual but interesting way to watch a movie.

UAR is a great name but in my head I’ll be referring to every film released like this as a “stair edition”.

I’m sure you’re saying I’m immature, but I don’t care.

Wait, Marks gets a smiley emoji and I get this?

Some times I feel like Mark’s Down On Your Syntax is going to put on a puppet show telling us how we’re all going to die.

That duck who’s living in your mum’s caravan told me that she told him that you were actually Paul Robinson’s secret lovechild. I’m sure he’s lying but I thought you should know what he’s been saying about you.

My age is a prime number but I feel inferior as it’s not one of the small ones.

I’ve no idea if these have already been guessed correctly but here’s a few predictaguesses from me:

I actually had to Google what the word elective means in the US college context to understand the above posts! Now I understand, and lol. In no way was I making a joke though, for once I was actually being serious!! Duracell can decide just not to watch that stuff.

(that link Rebo posted deserves a thread of its own I reckon. There’s definitely some fun debates to be had about that - I have a feeling we’d get some strong opinions on both sides from a few folks on here!)

Inevitably it will crash and all those important tabs full of deep insights you meant to look at again will be lost to history. Or maybe you’re the kind of horrible person who opens new tabs for no reason.

REPORTED to authorities in the state of Florida.

I’m in England, he’s in Canada.

We ain’t afraid of them!

Seems like there used to be a thread inquiring about missing persons, but I can’t find it. I am a bit worried about Bingowings, knowing what difficulty he was going through, and now it’s been a while since he last logged in. Hope he’s okay.

Ditto. A few of his posts toward the end of last year did have me feeling a bit concerned. He’s disappeared from time to time before and always come back so whatever he’s currently doing I too hope that he’s okay and he comes back to see us sooner rather than later.

Update i got the first 10 minutes done working on the crawl for sith.

I mean this in the nicest possible way, Kitty… for the love of God please post your crawl here for proofreading before you finalise your edit.

My mom will be joining OT soon.

Do you know how when you drive a different car than you’re used to and you need to mentally readjust your sense of the width and height when driving in close to walls etc but how after a while you just get used to it and know without looking how much space there is?

Well, the new positioning of the Falcon’s dish makes me wonder if Lando had forgotten that it wasn’t still laying flat when he flew it through the Death Star in Return of the Jedi.

I bet after he said, “That was too close” he thought to himself, “…and it never would’ve happened if you’d kept it in the same place I installed it, Han old buddy.”