Don’t know how this guy did his captures

😦 I hope you don’t mean me, I just took them from moonization’s videos. Glad I was wrong with their actual look, though. Still I wonder how the first screenshot of the rock in space actually looks like.

:\ I thought the OT couldn’t look uglier than on dvd/blu-ray, but Disney somehow succeded in making it look even worse!

Here brightness is so high you can see this special effect’s corners:

Contrast is so bland you can see Luke’s hair and face don’t cast natural shadows under strong and direct sunlight:

Colors still look unnatural to me, at times. 😄 And what’s with this purple-green-orange abomination!?
https://thedigitalbits.com/images/articles/starwars4k_2019/sw4-sc149.sh24-missing-y-wing.jpg

Describing that story as a “relationship” developed over three movies is mostly untrue.

I see it this way:
ANH: Vader (together with Tarkin) is the villain who killed Luke’s father and his mentor.
TESB: Vader captures and tortures Luke’s friends to get him and later reveals to be his own father.
ROTJ: Luke is said to defeat Vader, yet their conflict relationship brings them together and overthrow his master.
To me, it’s all about their relationship, one way or another.

Not to mention that while the relationship between Vader and Luke was developed over three movies, Palpatine here just drops in and pretends to steal the show by claiming to be Rey’s grandfather :\

TROS Supercut Trailer (all footage in plot order according to the leaks):
https://www.youtube.com/watch?v=zp4zBscDu94

[…] Not sure about Kashyyyk, but IIRC it was already considered as a setting for the original SW or mentioned in Chewie’s background.

According to John Doom, Kashyyyk IS mentioned in the OT.

That’s not in the OT.

Well, I didn’t say it is actually mentioned in the movies, just that I remember it was mentioned in the scripts. So today I checked everywhere to find the source of this rumor and found this essay on the development of the Star Wars script:

Chewbacca (now with the nickname “Chewie”) is “an eight-foot-tall-savage-looking creature resembling a huge bushbaby monkey with fierce baboon-like fangs. His large blue eyes dominate a fur-covered face and soften his otherwise awesome appearance.” 140

With his production paintings, Ralph McQuarrie had convinced Lucas to soften the two-hundred-year-old Wookiee’s frightening features and eliminate his clothes, leaving the two chrome bandoliers. 141

Beside the script, Lucas constructed a detailed culture for the Wookiees. They live in giant trees (just like the “Ewoks” in Return of the Jedi) on their homeworld Kashyyyk, and they have their own version of the Force based on their empathy with plant life. Their most sacred custom is the life debt, which Wookiees pledge to those who save their lives. When Chewbacca was saved from Imperial slavetraders by Han Solo, he pledged a life debt to Han, and now he travels with his saviour in order to carry out his sacred obligations. 142 (See also Appendix, p. 54.)

Boba Fett was introduced in the SWHS on purpose, though: he was already written for the TESB’s script. Not sure about Kashyyyk, but IIRC it was already considered as a setting for the original SW or mentioned in Chewie’s background.

Anyway, I think this thread’s going pretty OT even for this site’s name 😄

I think a lot of people see the greatness achieved by Empire and forget that it stood on the shoulders of Star Wars.

I don’t disagree at all. As Kershner said, Star Wars is the breakthrough and therefore can’t be outdone.
But ESB takes all of it and pushes it to the next level in a much more mature film. That’s something Star Wars has never gotten again.

I don’t see it that way. I know of the interview you mentioned, but IIRC they were talking mostly about SW’s original success, not necessarily about SW being potentially better than TESB as a movie.
In the end, I think they were able to make TESB stand on its own, in fact I’d say it’s a very different movie than SW, it doesn’t just rely on building on top of the previous movie. They are both good movies, mind you, but in my opinion TESB is better than SW because it has much more depth, much more care for the characters and its world. It is also so well crafted I’d often take a random scene and start analyzing it just to learn how the hell were they able to to make it so good. Few movies are so well made (especially in recent years), it’s just that good 😃

It’s Max Von Sydow. His character has to be killed off in a genre film no matter what. I think it’s in his contract or something. 😉

I was wondering why did Ren kill Tekka instead of interrogating him like later with Poe? As much as he knew, Tekka might’ve been the only person to know of the map. What if he didn’t find Poe after killing Tekka?
Also, how did he know that Tekka gave the map to Poe? Did he read Tekka’s mind? Tekka might be old, but doesn’t seem to be weak-minded (except when he goes straight to them to get captured 😄 ). So, did he read Poe’s mind, instead? That would be odd too, because he later has to interrogate him for quite some time before he can get the informations he wants.

Realistically, what’s keeping Disney from releasing the OOT? Costs? Low interest? But I’d argue that, since we know they’re already scanning every negative, even deleted scenes (see Rogue One), they may as well have scanned all of the original trilogy at this point, anyway. And even if they don’t find printing new discs worth the costs, they could release it as a digital download: granted, it’s not the same, but it’s a viable solution that would cost them virtually nothing.
So, I don’t think these are the problems. I think they just don’t want to release it at this point, probably because they want to focus on marketing the new movies. 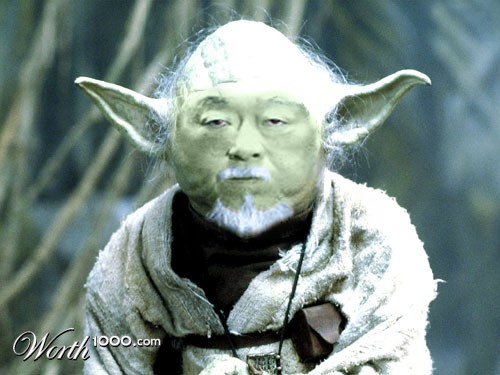 I agree most people don’t realize that film can look “hd”, though it’s not really their fault, they’re just not aware of it (I wasn’t too until some years ago! 😄 ).
About grain, though, I don’t know anyone who actually dislike it. Maybe they use DNR on movies just because it eases digital compressions and makes special effects blend better with the live-action footage.

I did go through every page up until page 72. Maybe I missed it? Thanks for sharing (again?), anyway 😃

JEDIT: btw, Frink, why haven’t you shared your rankings yet? Almost everyone else already did at this point 😄

Probably yes, not sure if above, between or below yet, though. I’d probably need to make a different ranking to include R1, but I don’t know if there are enough votes yet.

Can we all agree that we can’t wait to see The Last Jedi?!

btw, out of curiosity, I calculated what are the most average ranks in this thread until page 43. These are the current results:

To complete my previous post, as Gary Kurtz said:

It’s very easy for the film critics to analyze why a film is popular or why a film is good, but in the long run, it’s very, very subjective. You get six people in a room, you’re going to get six different opinions about any film and they’re all right. There’s no wrong. […] If you enjoy what you’re seeing, and you get something out of it […] then it’s working for you.
http://www.ign.com/articles/2002/11/11/an-interview-with-gary-kurtz?page=4

[…] Actually, this topic would be retitled as “Ranking the Star Wars films, but only in a single way where you cannot propose your own ranking if it differs from some very active members of OT”…

😄 it would be pretty boring!

Do you think you can convince people that ROTS wasn’t awful? Because I’ve heard all the arguments before and I’ve never found a single one convincing in the slightest. I think anyone who puts any of the prequel movies above any of the other movies is just fooling themselves, because they’re putting three cartoons over five actual movies…but that’s just my opinion.

I don’t want to convince anyone of my opinions. ROTS is definitely not a good movie (otherwise we wouldn’t even be talking about it), I just explained what worked for me.
But here’s the problem: generally neither you should think that, since you don’t like something, everyone should agree 100% with you and that you should dismiss the others’ opinions like they are fooling themselves.
Do you think I’m fooling myself? I spoke with the other fans during my time on this forum, and learned about their own points of view, half of them I didn’t even agree with. For example, I disagree with you that TFA has a good story, I think it’s a complete marketing mess. I should think you’re just fooling yourself, right? I didn’t, ever, because I think that, as long as one speaks from his heart, there’s some truth to learn that may also give a better insight of one’s work (in this case that, despite my opinion on TFA’s story, it probably genuinely worked for you and that I should look into it).
It’s not about agreeing or rejecting, it’s about learning from the others.

JEDIT: I agree with you, Malà.