Digitally replace Mace Windu’s clothes and have him wear a maid suit through the entire prequel trilogy. Be sure to give no explanation for why he’s wearing it.

Commentary always sounds easy but it can actually be really tricky. Kudos for recognising that and taking your time with it.

I look forward to your thoughts on Jar Jar Binks.

Thanks! I’m still inching my way through the commentary in the slowest manner possible. Hopefully, I’m not trying everyone’s patience. That’s just how things have turned out so far.

I’m getting the next couple of days off, so I’m hoping to speed things up a little. It’s still amazing how much of a nerve-wracking experience it is to record this track. I’m gonna keep working on it. Kicking and screaming if I have to.

Add in some Eddie van Halen to Kylo’s scene with the vader helmet in TFA. Then, the next time Kylo talks to someone in the first order, dub in: “Last night, Darth Vader came down from planet Vulcan and said that if I didn’t take Lorraine out, that he’d melt my brain!”

For the first half of ESB, replace all of John Williams’ score with music by Ludwig van Beethoven…

…Then, for the second half, replace all of John Williams’ score with fart noises instead.

Completed the first 5 minutes of the commentary. Still trying on fix my stage fright. I think this commentary track might take me a while, but I’m taking the baby steps needed to complete it.

Just started on the commentary today. Turns out I have a bit of stage fright on the mic, so I’m gonna take it easy and work on it step by step. I don’t know how long it might take, but I’ll get it done one way or another.

In the flashback sequence of The Last Jedi, have Luke straight up murder Kylo Ren in cold blood. Then, give no explanation for why Kylo is still alive in the present.

Essentially what happened in the “movie”

You mean to tell me Luke actually sliced off Kylo Ren’s head in the flashback all this time? Damn, I must be losing my memory.

In the flashback sequence of The Last Jedi, have Luke straight up murder Kylo Ren in cold blood. Then, give no explanation for why Kylo is still alive in the present.

Just gave the edit a watch. I think all the bases are covered now. Gonna work on the commentary this week.

In the final scene of ROTJ, have a CGI Rodney Dangerfield show up at the Ewok hut and proclaim, “Hey everybody, we’re all gonna get laid!”

Video transitions are complete. I’m gonna take a look at my edit for anything I may have missed, then I’m gonna get to work on the commentary track.

Release a new special edition of The Phantom Menace, downgrading all the other effects but updating Jar Jar to the best of current gen graphics

Make sure the downgraded effects are reduced to Nintendo 64 levels.

More good news. I got around to setting up the microphone for my new computer, and I can say that I finally have a microphone that works. This means that I will get to work on that darned commentary I’ve been promising so much (but keep breaking due to technical difficulties). So, once I’m done with the video transitions, I’ll be putting that microphone to good use and recording the commentary track. So, for those of you waiting patiently to hear my ugly voice, wait no more once the re-edit is available.

And for those of you who don’t have enough disk space, I will be making a compressed 720p version that I intend to bring down to less than 5gb of storage. Oh, I’m still releasing this edit in the ever-so-wonderful lossless 1080p. It’s just that I’ve been getting a few users who either don’t have enough disk space or have a hard time with the cloud storage site that my edits are uploaded on. I will be uploading the 720p version on a different cloud storage site (don’t want to name names in case of security issues), so it will be accessible to more users. The audio tracks are also going to be changed from DTS-HD to the more conventional AAC for the 720p version (Sorry, but those DTS tracks are bigger than I thought). The 1080p version, however, will still have DTS-HD tracks.

So yeah, I think things are looking good. I don’t know how long the commentary track will take, but hopefully, I’m getting close to finishing v3.

Make an all-gungans version of the whole saga.

Sound editing is now complete. Working on the video transitions next.

I really admire the amount of meticulous thought that’s going into this.

Thanks, Eddie. I hope it’s fantastic.

Anyway, just started work on sound editing for the climax. Here’s hoping it isn’t too much of a nightmare.

Replace the musical score for the opening crawls with Cantina Band instead.

When it works, it works.
https://streamable.com/j7ksa3

The key phrase being “when it works.” You don’t want this to open ESB or ROTS.

Replace the musical score for the opening crawls with Cantina Band instead.

I’m really excited for this edit.

Thanks, Cap! I hope it lives up to your expectations.

Anyway, I just completed sound editing for the Coruscant scenes, and while doing so, I decided to take out the line, “he’s too old.” from the jedi council’s rejection of Anakin.

Admittedly, that line never was a great one to begin with, but I kept it in for v1 and v2. I figured since it was going to be mentioned in Episode II thanks to a deleted scene I added, that removing the line would be bad for the trilogy as a whole.

But the thing is that, in context of Episode I, it’s nonsense. It’s obvious that everyone on the council is sensing bad vibes from Anakin. That alone is enough of an excuse for them to reject him. Saying “we’re not gonna train him because he’s too old for this crap.” makes the scene more complicated than it has to be.

Of course, the thing that will obviously come up is how this might affect Episode II. After all, Obi-Wan does mention to Mace that he and Yoda were right about the boy being too old in my edit. My take on it is that, because it’s such a small detail, and because it just barely has any relevance to the trilogy as a whole, the audience can leave things open to interpretation over when the argument over Anakin’s age happened. There was probably a debate over his age just before the council decided to let Obi-Wan train him, perhaps as a last hurrah to stop him from being trained.

Whatever the case may be, it’s a bad line. I don’t think anyone is going to miss it that much.

I’m somewhere in the middle of the Coruscant sequence now. Surprisingly, I haven’t had to do too much to the sound editing on Coruscant, although that’s probably because Coruscant is the planet that was the least heavily edited by comparison to Naboo and Tattooine. I’m sure the new ending will give me enough of a challenge soon enough.

Create an all-ewoks version of ROTJ.

Just added another thing to v3. This shot: 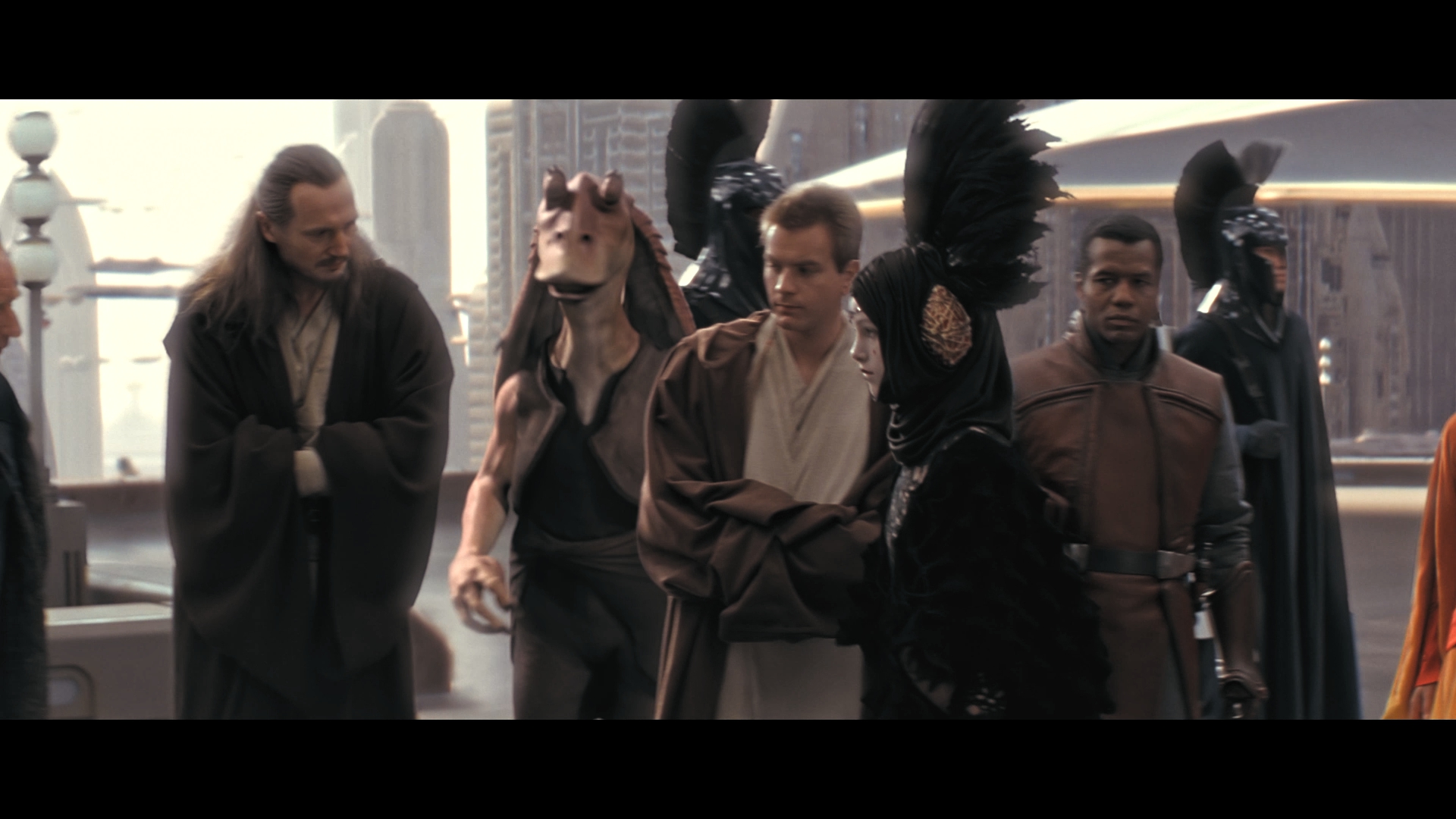 The Coruscant entrance was the second hardest part to edit for Episode I (The pod race took first place). It was a combination of good and bad ideas happening at the same time and sometimes altogether. The sudden shift to Anakin’s POV in this scene also made quite a crux, since it can’t be fixed at all. Naturally, because of the difficulties I had with the opening to Coruscant, a mistake was made. I cut out the shot where Amidala walks over to Palpatine and Valorum for the first time. I don’t know what I was thinking when I removed it, but because this is mainly Amidala’s scene, it needs to be in the film.

The only reason I think I cut it was because Palpatine started talking in this shot, and at the time, I didn’t know any better about sound editing. So for that reason alone, I removed it. Being older and wiser on Resolve now, I cut out Palpatine’s audio through the power of sound editing. The only crime that may be committed here is that you might see Palpatine’s lips moving, but since the focus of the shot is on her, I think it’ll end up being invisible (unless you’re really that perfectionistic).