Oh yeah, I went through the deleted scenes and you are right. My bad. 👍🏼

Hey MR, I watched your “VFX Scenes Walkthrough for The Rise of Skywalker” - YT video. That shot of Kylo Ren on the bridge watching the rising Coruscant out of the window looks amazing! I would be interested to read what technique you used to get that lighting effect on the floor since I’m trying to do something similar.

I could do that, but unfortunately that would mean rerunning the upscale as I didn’t save the originals. Also, I don’t believe that would help, honestly. The uploaded version was ran through handbrake on the slow preset with an RF of 18, and to my eye at least is indistinguishable from the original upscale. I think the bigger problem is just how much detail the upscaling can actually add. Some of what looks like compression artifacts are actually artifacts of the upscaling process.

Going up about 50% produces results that are incredible, such as in my ESB upscale, Though even those could use a lot of manual work, which is why Adywan is taking it one step further with manual edits on his next version. For these deleted scenes, it’s a 225% increase, which as you can imagine, doesn’t work as well.

Yeah, I suspected that the original resolution might also be the bottle neck here, those deleted scenes don’t necessary use even as high bitrate as the dvd version of the movie, because all the other stuff in the bonus disc. Thanks for clearing this up, anyway your upscales are very good as they are.

Yeah the process you described is how you could probably get a base channel out, but I didn’t see it worth the trouble. Most scenes I added aren’t “base heavy” in my estimation and the ones that have base have partly theatrical footage mixed in (with base) or have sound completely from theatrical footage, only the video replaced.

I have to check out that Halo Upmix though, it would help a lot in the future. Thanks for the tip!

Thanks, yeah the new text was a lot of work.

I used Adobe Audition for the sound mixing. I think my sound editing process was pretty ad hoc, and the are limitations what you can get out of stereo sound so the new deleted scene tracks are really 5.0 since there is no real base channel. Otherwise it’s just careful study of soundspace in theatrical scenes in the some location and mimicing that and/or matching soundlevels and channels to the scenes right next to added deleted scenes.

Hey alien fan, it’s only right that a major Alien/Prometheus fan can see this as well! You now have a private message with the link. And if you have energy for it, I would like to read your thoughts here after watching it.

Yeah, this project is very cool, let’s hope it continues and that everything is OK with TheAlaskanSandman IRL. These edits are a massive undertaking so maybe he is just having a burnout from all the work on these edits. =)

bryantmh, you have definitely squeezed more detail out of PT DVD deleted scenes that I have seen previously, nice work! I have one request though, would you be willing to upload the AOTC and ROTS upscales with higher bitrate? I think that would also help them blend better with other footage for faneditors using them.

Please link me as well!

Ok, switching to version 2.79b helped. I could not open my previously made crawl file in the older version, so I had to do kerning from scratch, but it seems to be rendering just fine now. Thanks for the help Jack!

I can’t get render to work, it just makes black screenshots. I’ve been trying to figure this out for a while. I’m using version 2.8 of Blender. Can Jackpumpkinhead or someone else let me know what version of the program is used in the tutorial video? I could try with that older version.

Sure. They are 3 shots, from the Jedi lighting their lighsabers in the end Theed battle to entering the big sliding hangar doors. This part is the worst I think: So many issues with lighsabers in this movie when you start really paying attention. VC Saber is the Video Copilot Saber blugin right? I have to look into that flicker effect…

You might have fixed this already after the release of the trailer, but Qui Gon’s saber blade has always looked too short to me in the forest after they land on Naboo. I have fixed the shots myself on After Effects, so I can show you what I mean:

This same problem comes up later in the end Theed battle of the movie as well, Obi’s sabre especially looks half the length it should be on some shots. So if you agree I’d like to see these fixed in your edit. I can probably get you my AE files (if you used AE for sabers, can’t remember) to tinker further and speed up the work if you want. =)

Very interested how Luke is alive in this edit, I assume his shots are recycled from TLJ and BTS footage form TLJ and TROS? Surely recoloring his blue as balls force ghost (to make him look alive again) is beyond even the skills among fan editors? =)

Found this site: https://starwarsscreencaps.com/. Can someone better versed tell how accurate the captures are?

It would help if they had used the same frame for both and not one a few frames later in a shot that the camera is zooming in. fitting to the 2:39:1 ratio does not mean having to zoom in, cutting off the edges. Its a few pixels less top and bottom and, for the most part, the new transfers are less cropped than the 2011 blu-rays

Ah, I should have known better than trust stills from a moving shot! The screen capture from the Death Star hangar looks very promising, I’m glad I was proven wrong.

It would seem like the new transfers are “zoomed in” form 2:35:1 to 2:39:1, resulting in some lost scenery on all the edges of the picture (according to Force.net: https://boards.theforce.net/threads/the-eventual-release-of-the-prequel-trilogy-on-4k-blu-ray.50048066/page-6). I can’t confirm since I have no Disney+ but if it’s true, could the 4K83 maybe be a better main source to work with after all?

Damned it seems there’s always something f:ing up the official releases.

An Idea: In TPM balcony scene with Sidious and Maul, I think the background should be tried to be changed into the worn down industrial area seen in the end of AOTC where Dooku meets Sidious. I think that would make most sense. It’s ridiculous that Palps struts around as Sidious in his senator apartment.

Also, could you share how are you doing the weather effects (dust, lightning, rain) seen in trailers, what effects pack are you using?

Yeah I actually DL:ed The Pruned Edition after I was done with my edit just for fun. Some of our cuts to jokes are exactly the same while others are subtly or very different. Really shows you how many different ways you can cut the scenes in a movie. Aside from the joke cuts all the other things mentioned above are not found on that edit so they are quite different. 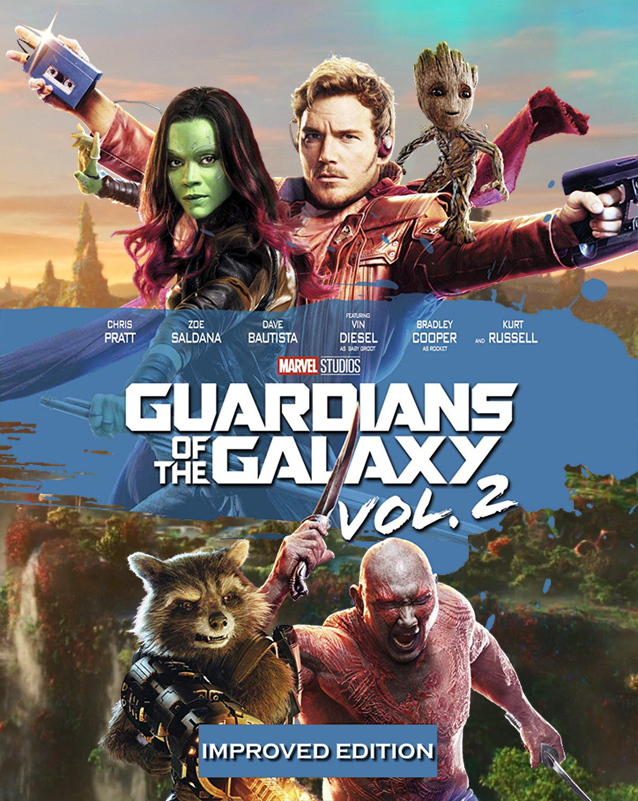 After 5/5 first Guardians of the Galaxy movie it’s sequel disappointed me right after seeing it or actually already while watching it. The jokes didn’t land, mostly because they were stretched too long and the ending was trying way too hard to be a tear jerker. Luckily both these things suit well for fan editing!

This Fan Edit’s goals are:

-Make jokes better by cutting most of them sorter, leaving the viewers a chance to connect in their minds what is funny about the line or scene.

-Reduce the retardedness of Drax

-Make the twist little less obvious by cutting Mantis almost warning them before shit starts to hit the fan.

-Trim the End to be less sappy.

The original edit really spoon-feeds you the jokes until they are no longer funny, the worst offender being Teaserface-jokes. Also, the fruit being not ripe joke and instructions for Groot’s fin stealing mission long joke for example have been trimmed to not hit you over the head with them.

Drax was socially unaware and stoic in the first movie, but here he is just a laughing buffoon. I’ve cut half his laughing sprees to make him a little bit more stoic and more in line with the first movie. He now laughs where there is at east some kind of reason to do so and not all the time randomly.

Packman sound is out because (although this is not a realistic movie by any means) where does the sound come from? Is Peter now able to conjure it somehow? And again the joke works better when it’s only visual. Also the Ego vs Peter fight is shortened a bit to not have to watch two CG- characters roll around so much.

Yandu’s babbling about controlling the arrow with his heart instead of mind is out because it’s out of character for a (ex) crime boss. Original is also trying soooo hard to pull your hard strings that I just started to wish they would hurry to the end credits. This takes out some drama of Rocket stopping Gamora to go help Quill and some end crying.

If someone is interested, ask me a link via PM

This project is very very interesting. I have done some effects in After Effects myself and with the things you are planning to do + Blender stuff, this project can easily rival Adywan’s timetable to the finish line. I love that the prequels are getting this much care though, so they can be up to bar with the Revisited.

I wish the purist version would have the Naboo invasion without the extra flames. I love the planet so much, it’s painful to see it half destroyed right away. 😃 So the purist version could be only polished effects and more radical stuff left to other versions. Your call of cource Sandman…