Encouraged that Disney is willing to acknowledge 20th Century Fox in the billing, especially considering the recent renaming of the studio. Glad that marque won’t be erased from film history.

Though I assume these are now wholly in the “possession” of LF? As in, did Disney move OT distribution rights over to LF division (or solely Buena Vista) after the acquisition, or is Fox still involved in some way?

Someone needs to start buying ad time on cable movie networks to advocate for OAR presentations. In an age with such affordable, massive TVs, there’s no excuse anymore. Not that there was ever a legitimate excuse for pan and scan…

An aside, are 16x9 presentations of anamorphic widescreen films even pan and scan, or do they just assume they’re protected for TV broadcast and crop them?

Given the current organization of the site, sure this makes sense. But wasn’t it easier when there were fewer sub forums and we could just have fun in the random thoughts thread? I forgot it even existed until now!

But yes, I’m sure an interpositive—or even separation master—transfer could look very good, and it would take minimal effort from LF… The existence of all the prints you mention probably has no bearing on the possibility of releasing the OUT.

I thought the reorganization s was supposed to make things easier! #reunitethesubsubforums

Why are the Last Jedi discs in the ROTJ sleeve?

Nobody even knows what the “goodies” are yet.

The only goodie I want is the original movies.

Broom Kid said:
But for 4K, it looks like they’re saying “you don’t HAVE to buy a box to get all the goodies. Just pick the movies you want.”

Absolutely not true. It was shot on celluloid and made extensive use of practical effects and models, though you wouldn’t know it from the god-awful home-video transfers it’s received.

Holy crap, I did Greedo

On the coming novelization of ‘The Rise Of Skywalker’, by author Rae Carson:-

“just gonna shamelessly take this moment to mention that if the #TheRiseOfSkywalker film included everything in the novelization, it would definitely be at least 3 hours long”

The book will be available from March 3rd - https://www.amazon.com/Rise-Skywalker-Expanded-Star-Wars/dp/0593128400

That tweet kind-of confirms the reddit leaks in regards to the insider speaking about how Disney screwed up JJ’s original 3-hour cut. Then again, it’s a rumour.

No it doesn’t… novelizations don’t always follow movies to a T. Why else would they exist?
And the fact that scenes were cut doesn’t confirm Disney screwed over J.J. All movies are edited and have scenes cut.

This sounds rather fantastical, but it would be fun to give the film a second chance if true.

And you do realize that the difference between 2.35:1 and 2.39:1 is basically unnoticeable, right?

That and, further, the fact that film projection was sufficiently imprecise that there’s no point trying to match the theatrical aspect ratio precisely. I say the same thing when people complain about 1.85:1 movies being released on Blu in 1.78:1. Nothing revealed by the slightly opened matte that thousands didn’t see in the theater. Well within what DPs protect for.

Well it’s still useful as an aggregator so I don’t have to scour Amazon or a million boards.

At least the Ewoks didn’t blink 😃

I’ll push back on the “old transfers” bit but otherwise agree. A modern but faithful transfer is the way to go.

Yes some of the effects are dated. Doesn’t mean they look bad or that the ‘97 cartoon effects look better.

ROTJ space battle effects look very dated. They are still among the BEST special effects EVER.

And I think they look better even than the sequel trilogy effects. I prefer the look of real ships, even if the motion is a little wonky, to the slick but artificial look of the CGI effects in the later films.

It was entertaining. I thought Ben’s redemption was kind of lame and predictable. None of what i think was supposed to have emotional power did much for me. The kiss was lame. The Emperor was lame. But it was a fun adventure

There’s a place for movies that are merely entertaining. But Star Wars should be more. 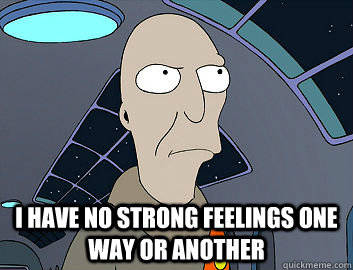 Well, I look at it this way: we might get the OOT before we ever get The Abyss and True Lies on Blu-ray. Whoopee.

Wait, are we getting one of those?