@DrVibble Regarding your review. At one point you mention drama about Lucasfilm and Kennedy. You better not be referring to those false “civil war” rumors from Doomcock…

Word that less like a threat. Consider this a warning.

@DrVibble Regarding your review. At one point you mention drama about Lucasfilm and Kennedy. You better not be referring to those false “civil war” rumors from Doomcock…

“You['d] better not be,” followed by an ominous ellipsis? What the heck? Am I the only one reading this as a threat? DrVibble took the time to write out a very thorough and kind review, and that’s your response? What’s your problem?

Hey mods, is making vague threats against other users enough to get Testing kicked off this thread? Please?

I was just logging in to discuss that very issue.

Worth noting also; in 1977 there wasn’t a series of films or yet-to-be-filmed second movie. It was a single story. No plot hole.

For sure one of the stronger episodes. Great location and depth of story. I’m really digging Omega’s character growth. She’s still innocent and learning, even when she’s being resourceful. Also nice to have a large part of her escaping being facilitated by the two bounty hunters having to fight each other to the point of distraction.

This has been the case all along, but maybe even more this week; the animation is amazing. The lighting and atmosphere on the derelict facility was my favorite of the series so far.

Even then, in the way “I am your father…” in The Empire Strikes Back was “foreshadowed” by Obi-Wan being emotional before telling Luke what happened to his father in A New Hope, the same applies to Palpatine’s return…

It wasn’t foreshadowed in Star Wars because Vader-as-Luke’s-father wasn’t written until years later.

I’m personally over all the spin-offs.

The reason Boba initially had a huge fanbase was he had the quintessential ‘less is more’ aspect. We knew very little about him aside from he was skilled, respected by Vader, and he didn’t fear talking back to him either.

A canon backstory or expansion only waters him down for me.

That watering down happened in 1983 when he comedically flew into a big slug’s mouth. The only thing missing from the scene was Yakety Sax. I’m not familiar with the prequels, but I know he’s shown as a little kid. Honestly, WTF Lucas?

For me, his reappearance and seriousness 40 years later in The Mandalorian is a long awaited return to gravitas.

I definitely prefer season one. For me, it’s much more removed from The Saga. It’s truly an adventure away from what we’ve seen for the past 40+ years. It’s familiar, but at the same time entirely new. It’s exactly what I’d hoped it would be.

If I had to pick a favorite episode so far; Season One, Episode Two would be it. It feels very much like a story in a galaxy far far away. Disconnected from the rest of either season. I particularly like the Mudhorn portion. I also really like that Mando has no idea what is happening when the beast levitates or how the child does it. That works perfectly in the non-saga story line.

Soured is too strong a word for my season two feelings, but I only really like the episodes with Boba Fett and Ahsoka Tano. I’d waited nearly that same 40 years to have Fett’s depth and dignity restored. For that, I’m very grateful. I also loved the Ahsoka Tano episode. Outstanding work all around. Her entrance was perfect. I also enjoyed The Passenger episode. Again, removed from the Saga. Interesting and well done with the X Wing pilots leaving him behind.

The rest of the season shrinks the universe a bit too much. Particularly seeing Luke. To me, that was an unnecessary tie-in and story shrink. If season three stays in the smaller\Saga universe, I’ll be disappointed.

I’ll go with Hal’s first post. Art is subjective. If it doesn’t move someone, it doesn’t matter how much work, time, technique, etc went into it.

Yeah, Wrecker’s condition is getting worse a lot faster than I anticipated. At this rate, I think we’ll see them having to deal with it soon.

Interesting that they decided to do another job, but I suspect Carla will be less than enthused that they didn’t get the droid head. Since they’re a stand-up group for the most past, I assume they’ll go back instead of just bail on her.

I’m really digging the arc of Omega. She’s fallible and learning. Much more realistic than what we often get. I do think it’s sort of an interesting but also weird deal the way they bring her on mercenary jobs. She’s getting a very interesting education\entrance into the outside world.

A few screen-grabs to get an idea of what it is. I don’t have a grab of it, but I thought the twin suns on Tatooine were particularly interesting because they look the way the sun looks in our sky. By that, I mean so bright it’s hard to make out the exact edges because you can’t look directly at it. Sort of the way they’re shown in those early McQuarrie pieces. 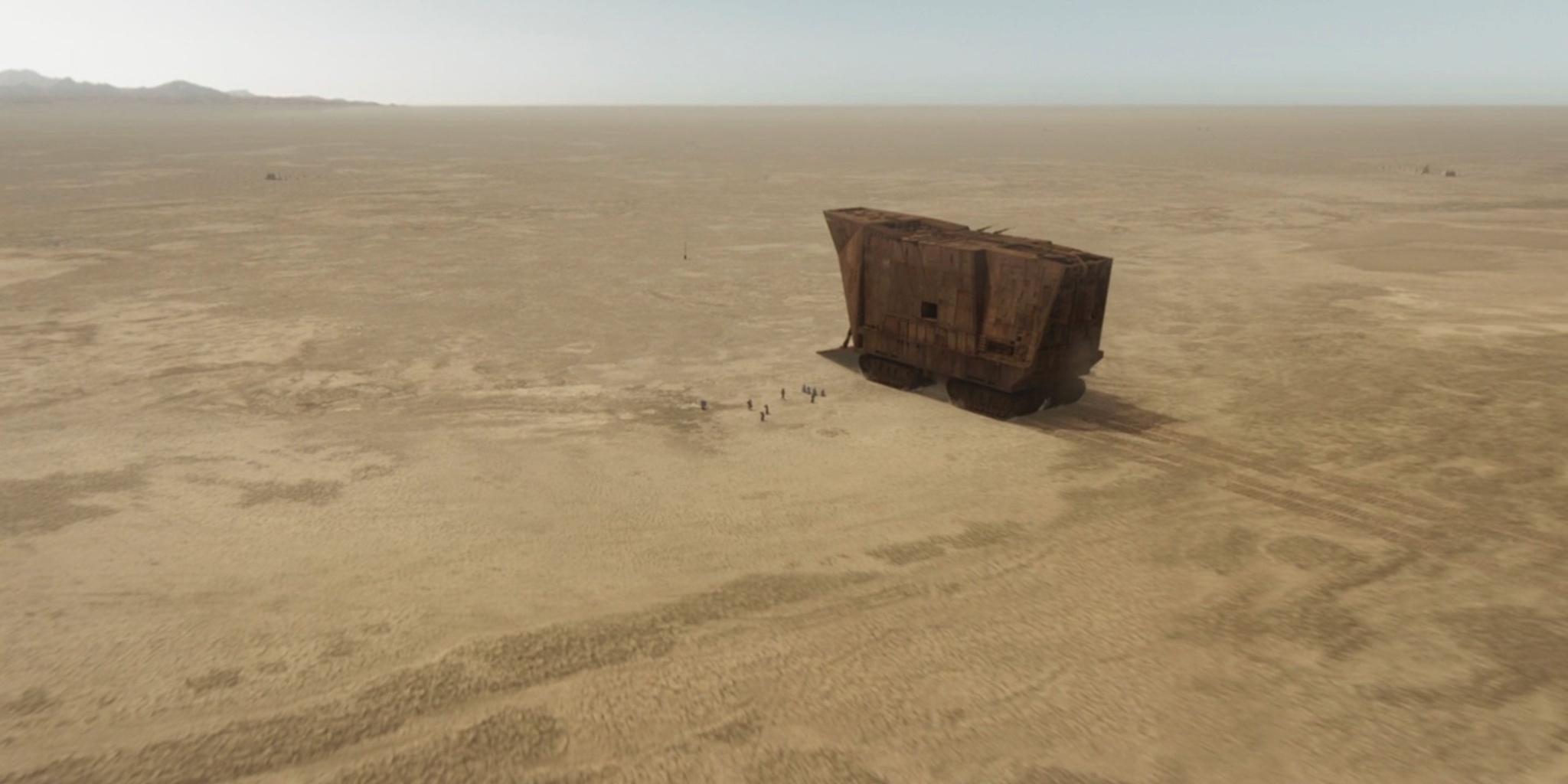 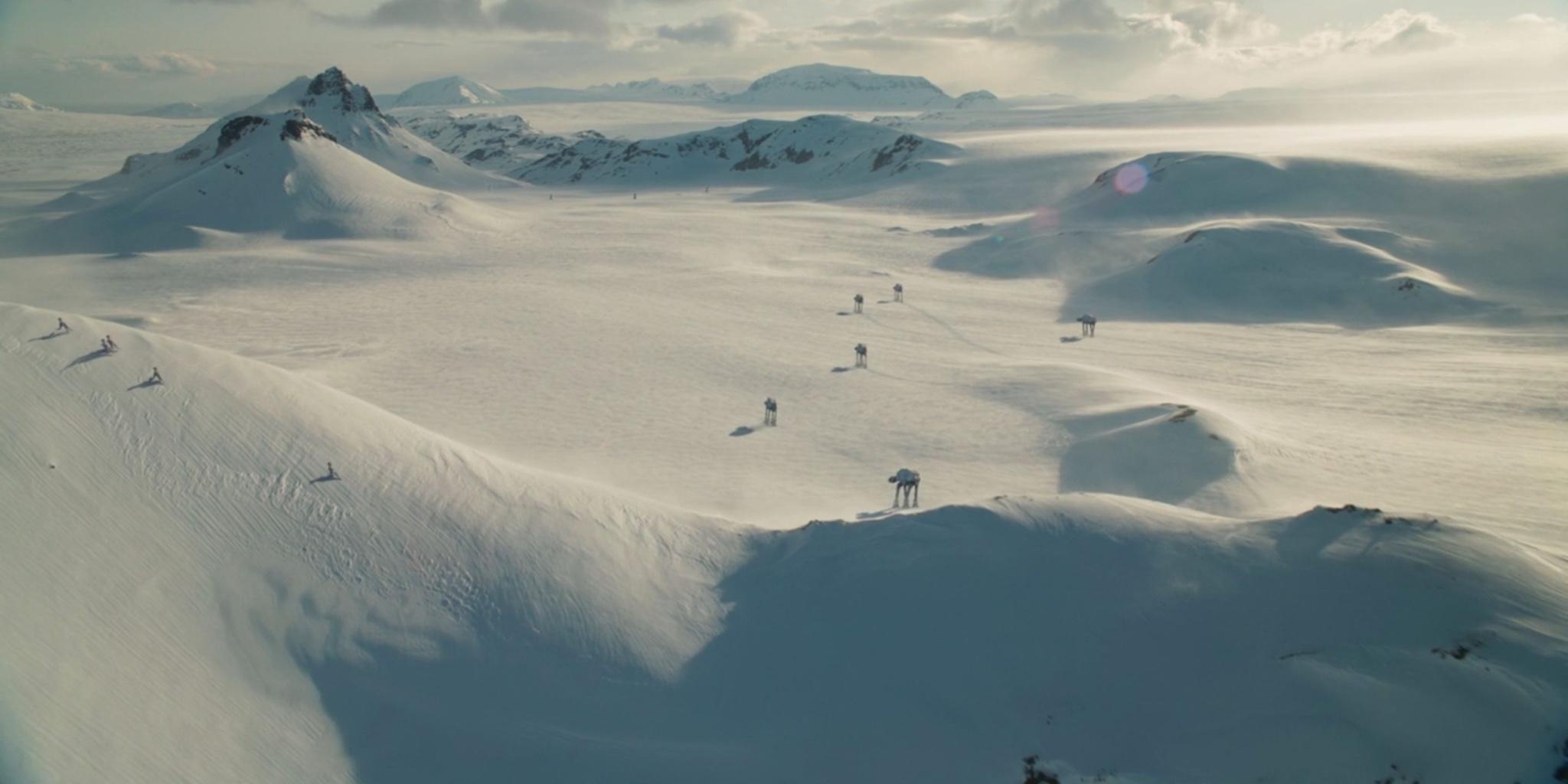 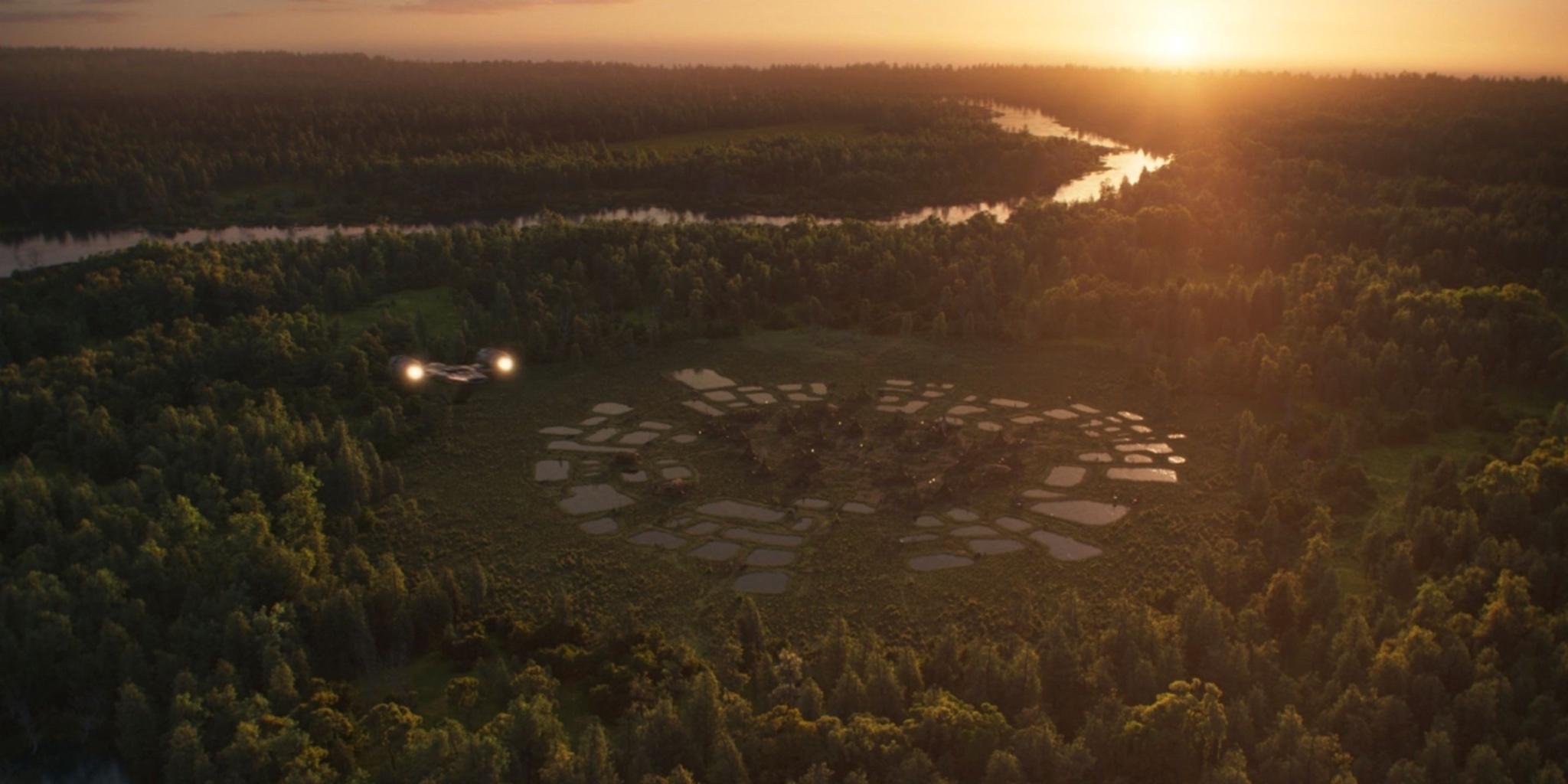 I have a nerd discussion with a neighbor every Thursday. Depending on time of year, drinks around an outdoor fire (I live rural) or cooler drinks at a table on one of our patios. We either discuss the previous week’s Mandalorian, or a Marvel film, or, as has been the case this spring, the previous Friday’s episode of The Bad Batch.

Early on, when Wrecker had a headache and had to stay behind, my neighbor said he suspected something is wrong with the chip and he has some brain issues. I thought it was just an easy plot point to keep him behind on the ship to interact with Omega.

Three weeks later, it’s clear my neighbor was right. Something is wrong with him and it’s going to be a bigger plot point in the coming weeks. I agree, Omega is not going to handle it well.

I found this to be very interesting. It’s a series of fly-overs of various Star Wars locals. It’s slow and quiet, but with some nods to key events in the films and shows.

My immediate thought was that it’s a Star Wars take on the screen savers that pop up on Apple TV when there isn’t activity for a while. If you use Apple TV, you’ll know what I’m talking about. The slow aerial flyovers of famous cities. Anyway, I gave it a look out of curiosity and enjoyed it. Would make great desktop backgrounds.

Even more moving now that I’ve watched it twice ; Her innocently thinking Tech accidentally made five counterfeit passes when she delivers them. I felt heartbroken that she had no idea they - a group with which she placed her entire future - were sending her off with strangers. Her leaving with the Batch was a giant leap of faith and here they were after one tough day already dumping her.

Likewise, I thought her calling them out with “just because I have a lot to learn, that doesn’t mean you have to rid of me” was very moving. It’s a window into her fear of being abandoned, particularly only a day or two after having been rescued. She was right to make a point of it.

I enjoyed it. I’m not deep invested in The Clone Wars series (but I do really like it). So for this, I’m just digging the ride, not sweating details.

They managed to give them an interesting reason to be on the move with unfinished business and some valuable cargo.

Given the amount of work that went into Clone Wars, the quality of this show wasn’t a surprise. Star Wars under Disney has really hit their stride on the various TV series.

Next one is Friday I think and then on to once a week. This will be a nice side adventure now that the MCU’s Wanda and Falcon are done for a while.

Beyond liking the characters (huge MCU nerd), I wasn’t sure what to expect.

Dug the finale, but I’m not happy that Walker is appearing to get a pass.

For me, these remakes far surpass the originals.

As far as sequels that were better than the first, nothing comes to mind.

I’ll edit if I think of more.

This sums it up perfectly for me. 😎

I let the political discussion continue for a bit here because it was relative to a member of the cast. I also participated. Both were a mistake. Locked until it’s subsided or we have actual news about the third season.

Edit;
I’ve also cleaned out a lot of the pure political arguing. A bit heavy-handed perhaps, but I am leaving the banning post for reference. I’ll clean that out later as well.

I am too. It’ll be interesting to see what it will be like without Grogu being a focal point. I am looking forward to the resolution of the darksaber subplot, and seeing Mandalore in live action (outside of brief flashbacks).

I will admit to being a bit concerned with him not being on the show. I prefer the more solitary episodes early on when it was primarily about the Mando and Grogu. It seemed more remote in location, as well as removed from the known franchise. Something I’ve always wanted.

I like the second season a lot and particularly enjoyed Fett, someone to me who was well over-backstoried in the prequels. For that, I’m incredibly thankful to The Mandalorian for putting right again.

That said, it looks like Grogu and Fett are taking a a backseat for a while. I have all the faith in the world in Favreau & Co to make an awesome show, so I’m looking forward to where they take the story. They had some outstanding episodes this second season. No reason they can’t keep up the great work.

As has been the case since I was a child, motorcycles are my passion, my escape. It is a rare day when I’m not on one. I enjoy all types: day rides, short runs, bike nights, charity rides, etc. However, a favorite type of ride for me, possibly my most favorite, is long-range touring/camping. This was a particularly cold one not long ago. Hard to tell, but the ground still had frost. 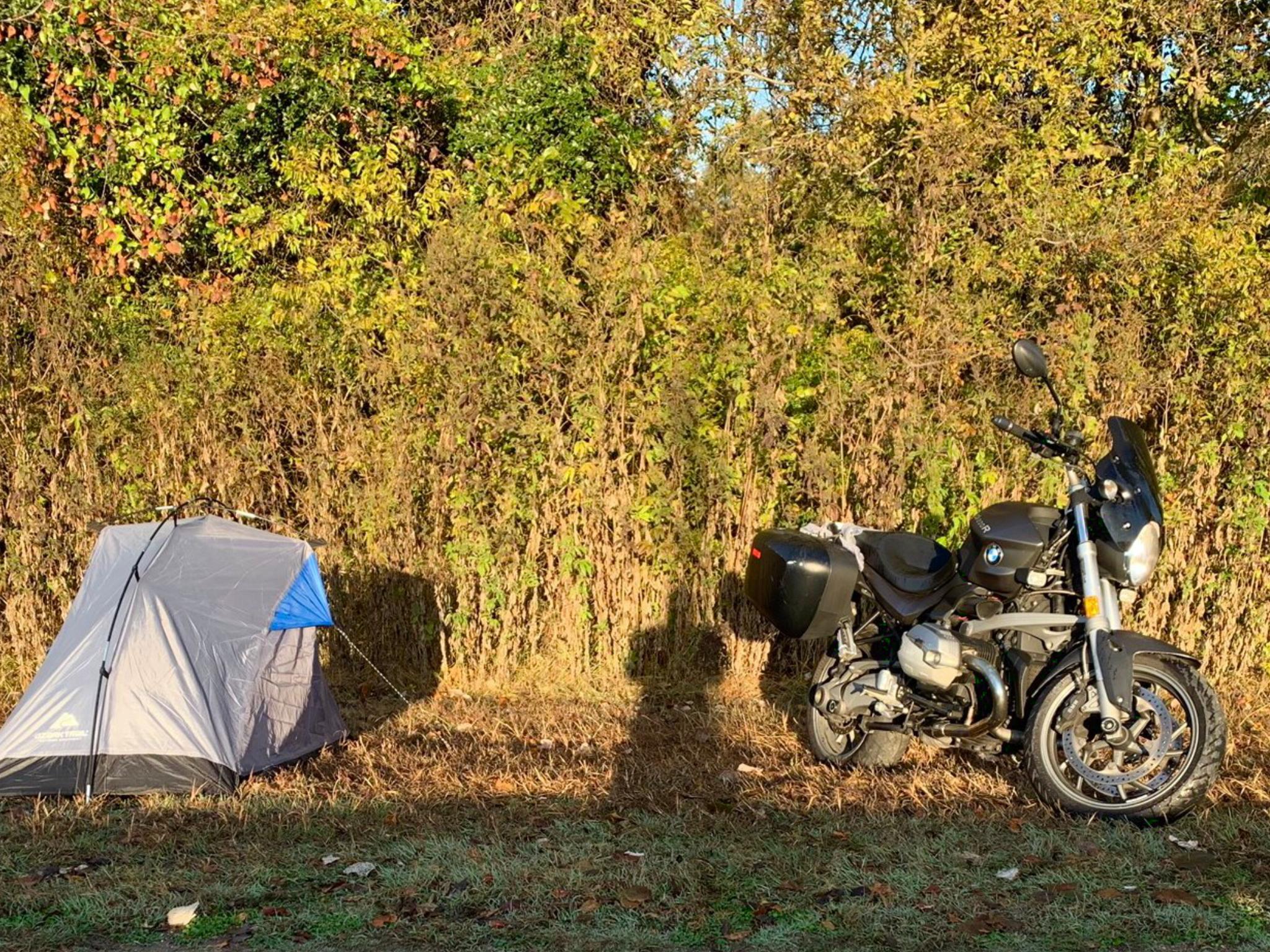 Man, those one-sheets are fantastic. The thought of what the series could be is certainly making this one of my favorites of all those announced shows. I agree that a Billy Dee Williams narrated show starring Glover would be top notch.

Has The Mandalorian Succumbed to the Dark Side?

Very interesting and some very valid points. Maybe goes a bit off track and overboard in the second half of the analysis though.

Some of that may be valid (not that I agree), but to me the good in the series far far outweighs the shrinkage. I dropped out after what looked like the halfway point. Dude starts to drone on while trying to prove his bona fides as a fan. It becomes repetitive and somewhat anti-Disney.