As somewhat of a follow-up to my ROTS Expanded Edition, this one extended Episode VIII to it’s longest running time (with finished VFX). ebumms has already done his own extended cut, but this differs slightly. His included a portion of the longer Fathier chase, which had unfinished CGI, while I won’t opt to use that. I’ve also used a portion of the extended opening, Rose biting Hux and “Where We Belong” as he did not. The “Luke Mourn” scene transitions to Leia as it does in Rekindled unlike his cut going from Luke mourning to his daily routine. Similar to his cut however is the inclusion of almost all of the Canto Bight B-Roll, so those who hate that subplot might dislike this edit. Anywho, here’s a full list. 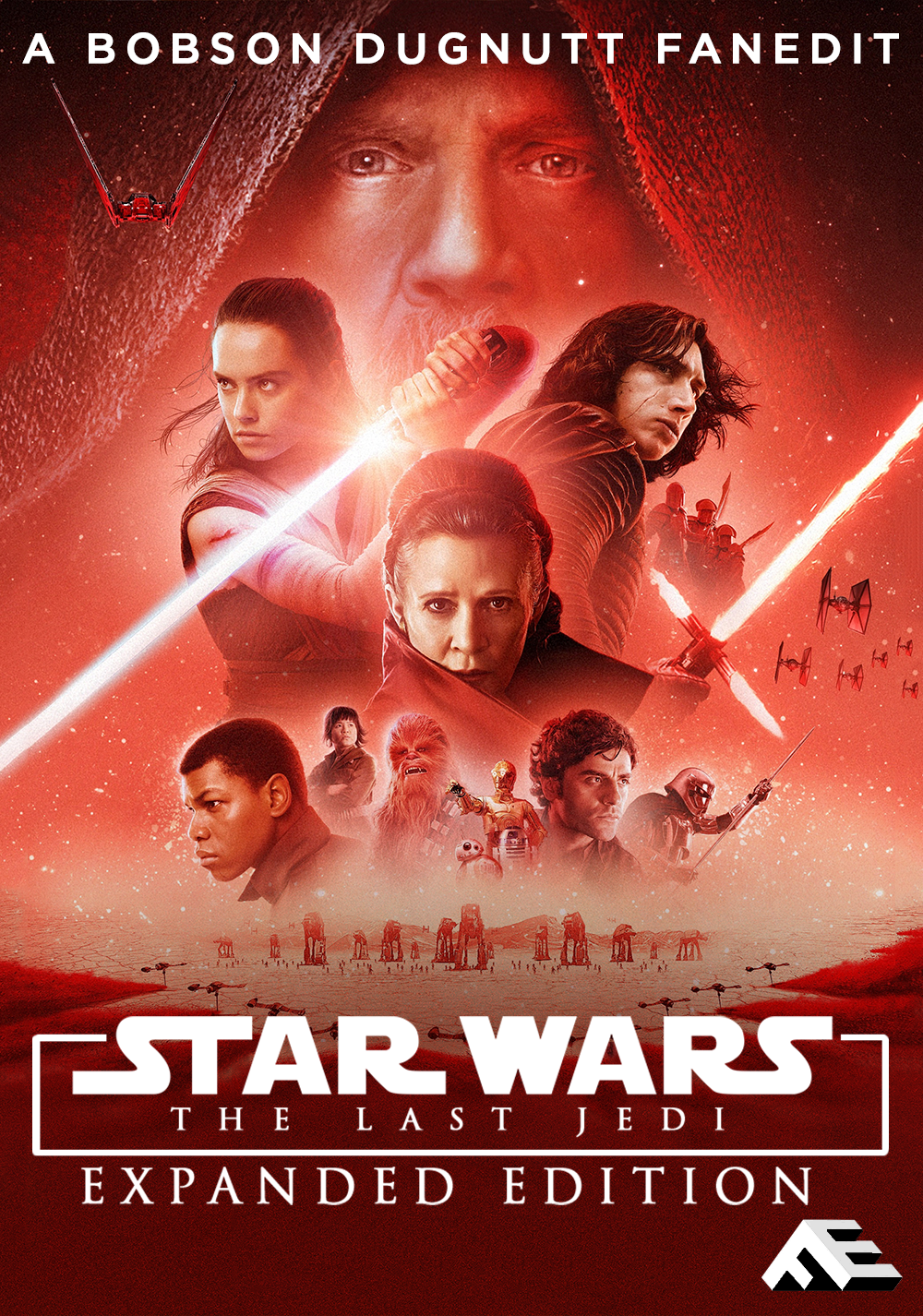 Here’s the snippet from the Alt. Opening

And the Rose/Hux scene. It’s not 100% but I feel it’s finished enough to fit in.

I’m not too sure if there is anything from any Trailer, TV Spot, or the other Blu-Ray BTS stuff that could be put in. As far as I’m aware, the only thing from the trailers that didn’t end up going in was Rey on the beach but that has been put in as apart of the Third Lesson. If anyone knows of any other stuff that can be put back in, I’d love to hear about it.

Exciting! Although interesting how you’re omitting unfinished cgi shots that ebumms used, but opt to use the ‘chomp’ scene, which has unfinished cgi 😄

Oh well, guess I’ll just have to watch this movie again to determine which version is better

Honestly I’d love to use just the sauna bit of the Fathier chase, but it’s those 2 shots of Rose and Finn crashing down that kill it for me sadly. I wasn’t a fan of the way ebumms cut to black for that scene, so sadly it’s on the cutting room floor.

I feel that the unfinished CG backgrounds in the Bite scene work a little better and are far less distracting than the mostly untextured Fathiers.

Well, that’s true, it is less distracting. You mention in the other forum the potential inclusion of the Phasma scene. Now that would make this edit even more of a fine addition to my collection!

maybe here are some help for you:

Looks awesome. Have you considered adding in the alternate Phasma-Finn scene?

Sounds really promising, i’ll love to see the final workprint of this project, do you plan to finish the VFX of the Finn and Phasma deleted scene??

Excited to check this out!

I’ve done my best to try and integrate the deleted Phasma scene, and it’s a little tricky as the scene was reshot, so the continutity doesn’t line up completely. I’ve done some colour work just to try and make the compositing look better, mostly removing the matte lines around the characters. If I were to finalise this, I’d do more work trying to remove Phasma’s red tracking dots

That flowed surprisingly well. The scene adds so much to Finn and Phasmas’ characters that I can live with the unfinished CGI in the background.

Doing some tests now to fix up the matte lines even more, and removing the tracking dots. Looks surprising well in motion.

We just need someone who really knows their VFX to go and fix some of the backgrounds and edges on the characters and it’ll be perfect! I’m sure it’s possible, I’ve seen some great CGI scenes done on here. Looks pretty good already.

The one scene I really want to see fixed is the caretaker village scene, Rey’s running always bothered me. and that looks awesome.

Yeah I think it needs a bit more polishing on the VFX and a bit of editing to make it flow smoothly on the movie, other than that, I’m lovin it!

Nice! The closeup of Phasma climbing up could stay though, no? I mean there is the continuity issue, but is there a way to make that work? And the shot of her falling into flames?

Nice! The closeup of Phasma climbing up could stay though, no? I mean there is the continuity issue, but is there a way to make that work? And the shot of her falling into flames?

I’m still working out the editing, so hopefully the falling shot works. But I don’t know if the close up quite works, I can try and tinker but I’m not sure.

Here’s a first pass at removing the Phasma tracking dots.

Looks seamless, dude! I don’t see any trace of the dots from the original scene.

If you could get the alternate Phasma scene restored to a decent quality, that would be great to be inserted in a fan edit that’s not quite as focused on being seamless. It really adds depth to Finn’s character.

I’m also putting together somewhat of a “Complete Workprint” that includes the Alt. Opening, extended Fathier chase, extended Phasma encounter and the small “Go Round Back” moment on Crait. I haven’t been able to put the Paige scene back yet, it might yet fit somewhere.

Currently it runs at 2:46:26, a bit under 5 minutes longer than the regular Expanded Edition.

Here’s the extra Crait bit, not sure about the music, might need to replace it or just extend it somehow, anyone know if there is a track just like it that would fit?

And the end of the Phasma fight, now extended a little with more of the unfinished VFX. I have replaced Phasma’s SE-44C blaster with the correct SFX as well

I’ve rendered out a small 5gb version of the Expanded cut without the Phasma scene if anyone would like it, for feedback if anything. I can do a full BD-25 encode if desired too

You can PM a link if you want, I’d love to give you feedback and advices on how to improve it!👍

A short trailer for the edit, a bit of fun really. 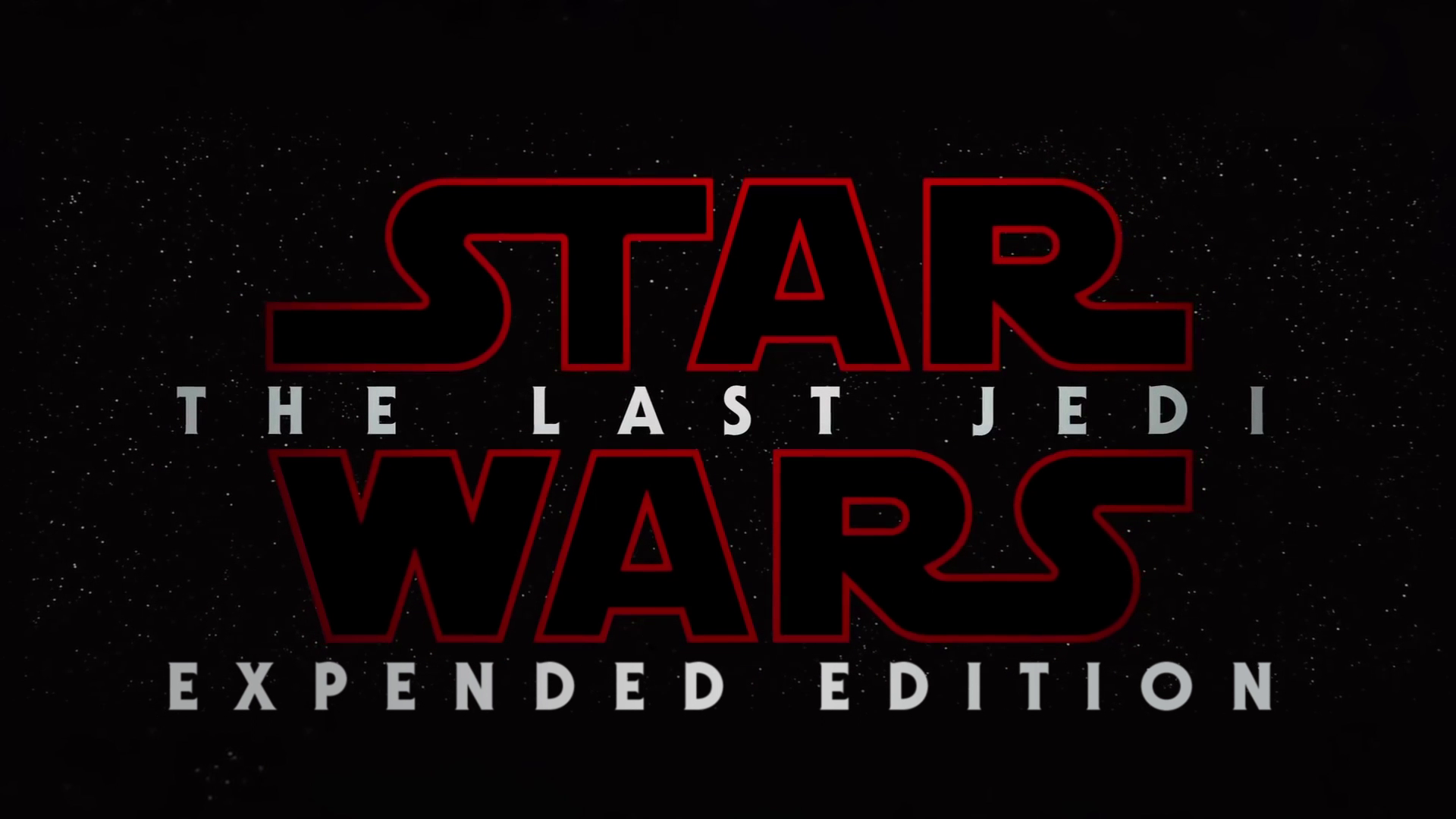 So excited for whenever this is done. I so can’t wait to see a full extended deleted cleaned up scenes version of TLJ! 😄

The edit is now done and on the IFDB, uploaded with a few bonus features too.

Also after listening to Rian Johnson’s commentary, I realised there was another little bit with Rose after the Fathier chase, so I just put it back in quickly.

Would love to get the link to this🤟🏼