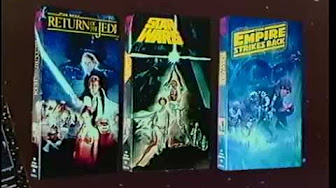 The blurb;
“Promo found on the early 90’s era video releases. Also includes a plug for the BTS documentary From Star Wars to Jedi: The Making of a Saga.”

Awesome.
I got that trilogy set with the doc for Christmas early 90’s. Best Christmas! 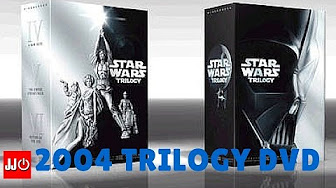 The 2004 DVD is one of the releases that I have the fondest memories of, and I remember the day I went with my mother to buy it quite clearly. However, much to my her surprise, after we got back from the mall I completely ignored the actual films and sat down and watched the 4th Bonus Material disc instead. I already had the 1996 VHS set so I wasn’t really that interested in the SE versions. I’ve always been fascinated by film-making, so the bonus disc was like my holy grail of BTS info at age 12.

Even though, like most people my age, I saw the SE’s first, I was very lucky in that when I asked for my own copies back in 1999 during the TPM hype, my mother went to a second-hand VHS & comics store (which just so happened to be near her work) and bought the 1996 VHS set not having any clue that there were different versions. However, I’ve lately started to wonder if maybe I have the store clerks to thank for me having grown up with the unaltered versions, since I remember some of them being quite knowledgeable about the stuff they were selling. So who knows, maybe they intentionally picked out the original versions when she showed up to buy the SW films for me. 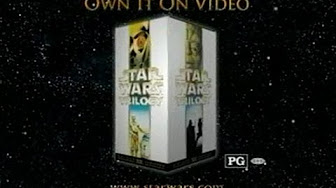 The voiceover:
“Every saga has a beginning. And now you can continue the adventure…”

The second VHS release of the Special Editions marketed as the continuation of the prequel trilogy…before Episode 2 & 3 had been made. The only bonus feature was a 10 min. featurette on Attack of the Clones.

^ Ah, the set that put the nail in for the OT.
This was the first time the SpecialEdition tag was dropped from the new versions.