YES! I didnt notice those 2 welders in the beginning of ROTJ until very recently.

Will the new footage have a grain filter matching 4K83 added to it?

Doubtful since the primary source is the Blu-Ray and not 4K83.

I think that color correcting BR and new footage to match 4K83 would work.

Sure, but I’m sure it’s easier to DNR the little 4K83 in use than to add convincing grain to everything else. Especially since ESBR doesn’t have the grain.

Plus ROTJ:R is going to be 720p anyway, so any grain added would either be effectively invisible (4K83 isn’t very grainy as is).

Shorter rendering times and the limitations of the blu-ray source.

Some Revisited items up for sale to help fund the next leg of ROTJ:R & ANH:R HD:

It’s all looking quite good. Return of the Jedi, while they upped the technicality of some of the effects work, it just hasn’t aged very nicely.

Yes the effects are problematic. You can see that they blue screened stuff on layers, with each layer having a different color shift. And there are some continuity problems on some sequences, fixable if you reedit according to the original intended scene sequences. This is specially noticeable on the space battle.

The official blu-ray of ROTJ, although people seem to think this one has the better colour grading than the other two in the OT, probably has the most problems. From the heavy magenta tone throughout, to boosted reds in the dark areas, green imperial uniforms in places and, where the others suffered with heavy blue tints and over saturated colours, ROTJ seems to be lacking some of the blue tones in the film. There are also shots where most of the colour is missing in favour of a blue/ magenta shift.

This film seems like it’s going to take the most work to try and fix or improve the colour problems.

Here is a sample that really shows how screwed the colours for ROTJ really are. Green uniforms? Really? The opening shot of the hangar is an example of missing colour. It’s so desaturated but given colour by the overall blue tint. Almost gone are the yellow floor lights.

Then we have Luke’s holographic message in which the blue is completely missing in the official version.

The section in this preview alone took over a month to re-grade the colour.

Another comparison preview, this time featuring Han’s unthawing and the Rancor battle will be uploaded later in the week. Sadly the video was blocked on facebook, youtube and vimeo so the previews will only be available as a download for the foreseeable future 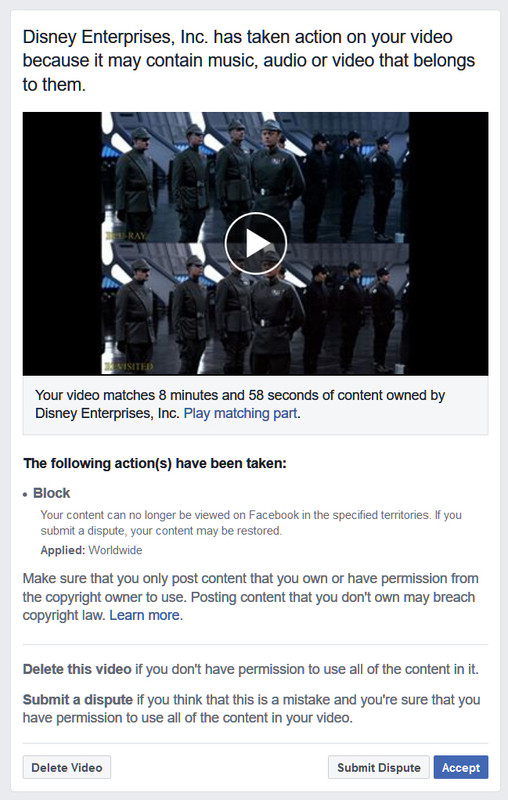 For those unable to download the comparison video, here are some screenshots:

Watched the video and you can really see the difference in color and can see the blue tint! Thanks for fixing the hologram color!

Those look wonderful. The difference is staggering when placed side by side. Very much looking forward to what would be the first full, proper ROTJ BluRay regrade.

As usual, your color grading is spot on and makes for a look that seems to retain the retro feel but still have proper colors.

Yeh. The material they used was Feldgrau (Field Grey). Which looks grey in some light conditions, brown in others and even a slight green tint in others. The problem is that ROTJ theatrical prints were screwed up in reproduction for release. Some were very blue and others have a boosted cyan channel. Same happened with ESB. I was told on very good authority that the ONLY version of ESB that ever had the correct grading was the 70mm version that was shown at the London Premier.

Now, thanks mainly to the screwed up SE’s, costuming groups think that the uniforms should be olive green, when they are not.

Haven’t posted here in a while. Good to see some progress on this Ady! The Blue squadron shots look awesome. Cant wait to see them integrated and matched to the footage. The jaba clip looks great also. I recommend leaving the tortured droid in the edit. There “seems” to be alot going on in the droid room in jabbas palace to justify it being there, You have the one droid being pulled apart, Perhaps you could add more droids in the room to justify the chaos. Maybe the scream could come from some other droid, since gonk droids don’t scream. Wish there was a way for you to add more Gamorrean Guards in Jabbas Palace, especially During the skiff/ Sail Barge fight.

How close are you to staring the live action shots for the Endore forrest battle?

Yeh. The material they used was Feldgrau (Field Grey). Which looks grey in some light conditions, brown in others and even a slight green tint in others.

That seems to be a misrepresentation of what the color actually is. Feldgrau (which was used for German uniforms during WW2) is grey-green. https://en.wikipedia.org/wiki/Feldgrau

Here it is translated for displays:

Here it is unmodified as the bar on the right, and with a brightness adjustment to approximate the darker lighting of the uniform: 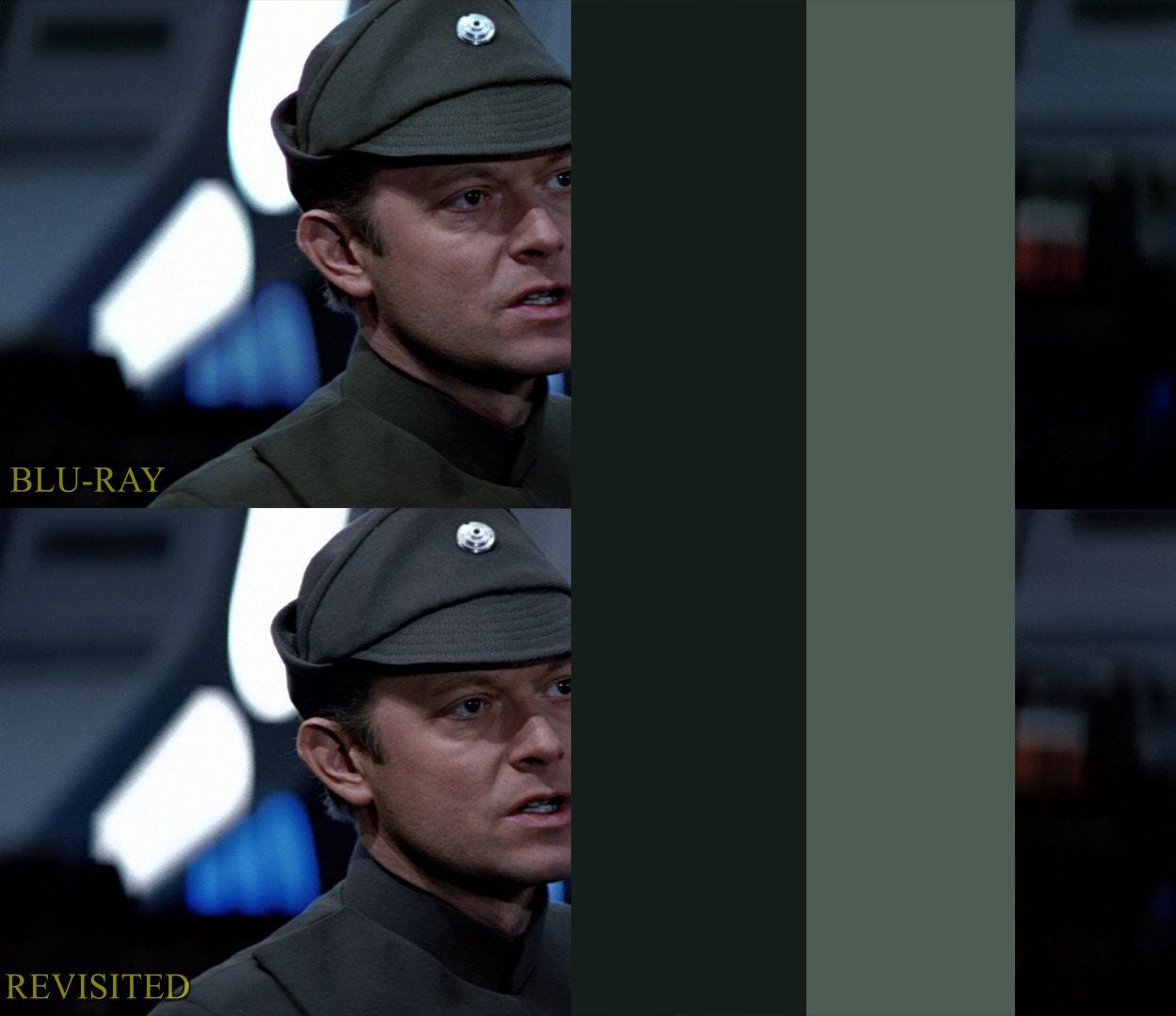 It looks to me like the Blu-ray actually has the uniform color about right.

I’d use the metal thing on the cap as grey/white reference, not the uniform.
The revisited version seems OK to me.

The link posted by Adiwan ( https://en.wikipedia.org/wiki/Feldgrau ) also shows a range of colors corresponding to Feldgrau. Modern variants and photos point towards a slight green tint, but it can also look grey, olive, brown, etc.
Depends on illumination and actual tissue I guess, but I agree that a very slight green hue would be OK.

Coming back to the droid torture stuff…what if instead of heat on the gonk droids feet it went more like this:

As far as the uniforms are concerned I’m with Adywan on this one. I don’t know much about the correct colour of Feldgrau but I do know how light reacts strangely with fabrics especially on film. coupled with the blue/cyan tint present in all the special edition blu-rays its understandable that the uniforms might not look as we remembered. I mean can anyone else remember how insane it was when everyone found out the Solo’s coat from ESBR was brown not blue?
If people still aren’t sure just look at rouge one, they based their suits off of those at the Lucas Film archives. Now while the movie does have a slight orange/blue filter applied to it, the set photos do not, and under studio lighting, they appear grey.
I think Adywan has got as close as anyone ever will to replicating the original look of the uniforms with the slightly brown/green grey (you can see that if you colour pic the pixels in PS).

This isn’t completely true. Return of the Jedi’s blu-ray has actually much less blue than the original version did in several scenes, but in most shots yes, there’s a blue tint over the film.

Good luck! I really enjoyed the small bits of ANH that I’ve seen so far!

I find your lack of faith disturbing.