He’s said multiple times since its release that he will not be using it.

coming to this conversation a little late, but regarding The Imperial March in Vader’s Entrance:

I like the choice of Imperial March statement being used for Vader’s entrance on the Tantive, in the example Invar used. It’d need better mixing and eq-ing to match with the orchestra around it, but it could work. But sound issues aside, I think it would also seem a little jarring overall in that the march wouldn’t show up anywhere else in the movie. But I think if you replace that original flourish Williams did with the original Imperial Motif statements Giacchino did in Rogue One, it might fit a little better? Specifically on “Krennic’s Aspirations?”

it would also need to be re-eq’d to fit with the 1977 recording, but I think it might flow better with the rest of the movie? You might not even need to remove the original fanfare that announces Vader’s reaction, it’d simply be a matter of dropping in a new, menacing version of the original Imperial theme from Rogue One over the top of it.

Along those same lines - I know Adywan isn’t going to be using that one remake of the Vader/Kenobi duel, but I am curious if there are going to be any changes to the duel at all. The attempt to extend the duel and make it look and feel more exciting was a good attempt, but I felt like the re-edit was mostly seamless in terms of how the changes were thought up and applied, except for that duel, where it became pretty obvious it was just rearranged shots we’d already seen matched up with Episode III music, and that was one of the only places where the re-edit pulled me out of the film. Is it going to be the same approach, a new and different one, or a reversion to the original duel with fixed VFX?

I was perfectly happy with how Ady re-cut the sequence, especially in the Purist version (no added music). It could use some tweaking to make the re-use of shots slightly less obvious in some cases.

My biggest problem with Adywan’s re-edit was how he had Obi-Wan ignite his saber first. To me, that doesn’t fit with the character or Kenobi’s goals in the movie. It just looked like a “cool” shot done for the trailers way back when. My suggest would be to have Vader with his saber already ignited (to keep the cool shot) or to have it like the SD version (albeit with Obi-Wan igniting his saber as in the official versions, just with the jump cut fixed).

JEDIT: There’s also this warped pylon that might need fixing: 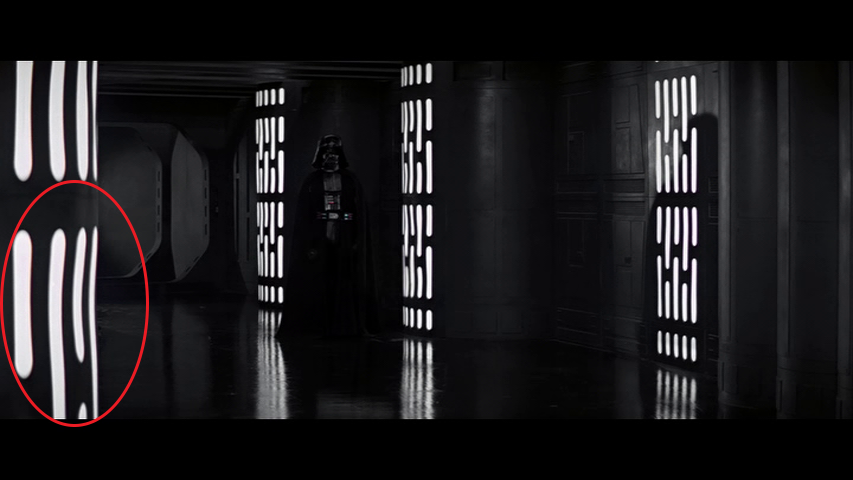 Again, I appreciated the attempt, but I think it’s really one of those cases where there’s simply not enough unique and interesting footage to make that thing feel faster or more intense with what’s there. It’s the equivalent of trying to re-edit the Tusken attack on Luke to run 30-40 seconds longer, but all you have is five or six swipes and that celebratory stick action to rock back and forth. It’s partially why the Sc. 38 re-do was so exciting, and then so disappointing: The only real solution to updating that scene is to literally re-shoot it. Someone finally did, but they decided to make it look like a Netflix action movie and not like Star Wars.

I think that fight, short of someone coming up with a box full of alternate takes that can be scanned and rotoscoped, or another group of people re-shooting and re-choreographing the fight and using face-replacement and deepfaking for Ben, is probably best left alone. For all the fixes and re-edits in Revisited that are legitimate improvements or “invisible” upgrades, it only makes it all the more apparent when an edit DOESN’T work, and I think Adywan did as well as he could with what’s in the film proper, but I don’t think it actually improves on the Special Edition the way all his other edits do.

I’m so ready for this question to die.
SC38 is awful.

I’m so ready for this question to die.
SC38 is awful.

I liked how Adywan recut the scene. If he just cuts down on reused shots and tightens up some of the longer bits of the original, it’d work.

SC38 was great, as a stand-alone fun project. But it would have been ludicrous to have turned up in a Special Edition of the film itself.

The way adywan edited the Vader and Obi-wan duel in ANH:R is fine just the way it is with the exception of that score being added to it.

Here are a few screenshots comparing the official blu-ray, the original SD version of ANH:R and the new HD version. As you can see i’m sticking pretty close to the shots in the original SD version of ANH:R (impossible to exactly recreate the shots without all the original elements and project files). Some shots though will be different . This will be due to a few reasons, but mainly because i wasn’t able to do / fix something when i first worked on the edit or because the original elements used just don’t look very good in HD. In the case of the R2 canyon shot, for example, the AOTC Blu-ray is so soft and digitally scrubbed ( not to mention the new awful colour grade used), the Tatooine elements that i originally used just don’t look to good and pretty fake/ cartoony. Plus i was never really happy with that shot in the first place.

The new sandcrawler shot is beautiful!
Everything looks great!

Agreed, I’m really liking all of those!

Glad to see the battle droid is staying, was worried that was gonna go because of the prequels not being a part of Revisited anymore.

Excellent work, Adywan! I’m glad to see that the skies have really improved from the SD version. The claw grasping the Tantive IV is also an excellent touch (I’m assuming you’ve resized the model or given it a CGI replacement as well, yes?), as is the use of 4K77 footage on the 3PO/Sandcrawler shot and the scanned matte painting of Tatooine. I do like that you kept the battle droid carcass as the last little prequel reference if only to demonstrate your opinions on those movies.

Hey Adywan, what software are you using for your ANH:R HD edit?

Oh my god that’s beautiful. Looks like I’m gonna have to donate more money. I love all you guys but especially you Ady.

For the ones who like the PT, it’s a nice bit of continuity between the trilogys.
For those who don’t like the PT, it’s possibly an in-joke about the PT being trash.
I’m just of the opinion that the shot looks better with something filling that visual void.

I feel like I’m the only person who doesn’t like that battle droid head. It sticks out like a sore thumb, especially in HD. Besides that, this edit is looking really good. That sunset shot is absolutely beautiful.

^To me, it doesn’t stand out anymore than the rest of the foreground-trash.
Especially in motion, where the white droid is rotating it’s head,drawing attention.

New skies look fantastic!
I know the prequels have their faults, but they also have their place. I don’t mind a subtle nod to them here and there. It’s a quick shot of the head and then it’s gone. Now if Adywan can just see fit to keep the Episode 2 Death Star plans from Star Wars: Revisited. Perhaps have the plans somehow morph from the Rogue One shot to the SW:R version.