Since I'm new here, I apologize if this has been asked before, but I'm just wondering if there are any fans of Battlestar Galactica here? Both TOS and nuBSG are applicable. I personally am a die-hard nuBSG fan, but I have also watched all of TOS BSG and can appreciate that show for what it was. nuBSG will always be my favorite TV show though, and IMO it was and is the best thing on TV. So any fellow BSG fans on this board?

Love '78 BSG. '80 BSG not so much. I've been making an effort to watch it for completion sake, though.

Yes. Yes there are.

Love the original 78' series, which I have just finished watching through again.

I still have the hots for Lt. Sheba. I enjoyed the new Battlestar series and attended a few conventions but have not seen the series since the original airing.

Ok, I might need to start watching this show.

I initially liked nuBSG, but after a while it just made me fall asleep. Some of the original series episodes were joined together and released theatrically here. There were at least two of these Battlestar Galactica "movies" and I enjoyed seeing them as a kid. (Does anyone know how these were presented? Wouldn't the original AR have been 4:3?)

BSG was the only reason I liked the harmonica someone gave me.

I'm a HUGE fan of the 70's show.  The tellamovies with the extra scenes are great (not to be confused with the movies edited for outside the USA theater release), I love the "Experiment in Terra" one, that did a major re-edit of the "Return of Starbuck" episode from "Galactica 1980" and also had newly made footage (yet cheesy) of an astronaut finding the logbook of the Galactica floating in space. Also it had newly recorded dialog recorded by Lorne Greene that tells the viewers the history of the Cylon's and the war.  I have also collected all the newly released limited edition soundtracks that came out over the last two years for the original 70's show.

WOW!  I just found the videos I had uploaded on this years and years ago.

The "Experiment in Terra" telemovie is the only Battlestar Galactica telemovie which actually features new footage. Back in the 1980's, MCA's T.V. distribution took episodes of Battlestar Galatica and made a number of feature length "Telemovies" by (In most cases) re-editing two episodes of the 1978/79 series into one story. These "Telemovies" had been sold around the world for broadcast as stand alone programing. A number of the newly created edits did contain footage that was not part of the original episode versions. But of all the "Telemovie" edits, only one had newly created footage inserted into it, and it's also the only "Telemovie" to use an episode of the original series combined with an episode of Galactica 1980 ("The Return of Starbuck")! FF I liked the original.    As for the new one, I could never get over the female Starbuck.

FanFiltration said: I have also collected all the newly released limited edition soundtracks that came out over the last two years for the original 70's show.

Awesome ! I was looking at these releases only yesterday.

Are they even available anymore? I have seen Vol 1 but the rest are elusive it seems.

FanFiltration said: I have also collected all the newly released limited edition soundtracks that came out over the last two years for the original 70's show.

Awesome ! I was looking at these releases only yesterday.

Are they even available anymore? I have seen Vol 1 but the rest are elusive it seems.

Yes, they had a very limited pressing on Vol 2, and now it looks like Vol 3 and Vol 4 are all sold out as well.   I was on the Intrada mailing list, so I got them as soon as they each came out.  I also have the Stu Phillips BSG Anthology. That was a limited 4 CD set taken from his personal recording tapes that had been released some years back.

I like all things Galactican (I even have a nagging admiration for Galactica 1980).

I do however loath SyFy for what the did to Caprica and Blood and Chrome (but mostly Caprica which had lots of potential and great characters).

I was lucky having a Rediffusion rental set I could pick up London television from Dumfries so I was one of the few people I knew who could watch the whole Ye Olde Galactica show.

I agree with you on Caprica, Bingowings... the series started out GREAT, and had such great potential, but somehow the writers just dropped the ball, and managed to ruin it. I did like Blood and Chrome... the story was fine, IMO... the only issues I had with Blood and Chrome were all VFX-related. Glad to see so many BSG fans here! As I stated above, I enjoy both shows, but nuBSG is my favorite.

I thought the writers were doing fine right up until the final (get it finished quick) episode.

It looked like the people complaining about the 'God' aspects of NuGalactica were going to get some of the answers the finale to that series didn't deliver.

This sounds as far fetched as anything David Icke would come up with but viral campaigns are pretty wacky.

I posted this in the appropriate thread, but I would be remiss if I neglected to make a point here that Glen Larson, the producer for the original BSG, is MORMON!  If you are familiar with our teachings, and if you are believer that we're already too sci-fi-oriented and weird already, then you'd probably pick up on a lot of references throughout the series that lend support to people's misconceptions about us.  Thanks, Glen :/

Grew up loving the original series. Remember drawing Cylon fighter ships at school! Wasn't so enamoured with the latter series where they found Earth though. My last memories of it were Dirk Benedict pointing knowingly as the Cylon walked past him at the the beginning of the A Team lol. As for the reboot?..tumbleweed...

With that being said, one of the main reasons I watch the show is for Sarah Rush!

Jane Seymour what a Beauty!!!

I Loved the original series and I knew the new series was out and just dismissed it after watching a small amount of an episode and with the opinion that the original could not be beaten.

I eventually borrowed the pilot episode of the new BSG from a friend and after I watched it I went out and bought the complete series tin box set.

I have watched it all twice through for the new series I can honestly say that it is the best TV show I have ever seen yet.

It's much better than the original series... The acting is far superior.

@Bingo the ending was the best ending to any TV show I have ever seen and that is where it ends... The spin offs are just that and not canon in my opinion even though Caprica is ok it's just not nearly on par

Ok, I might need to start watching this show. 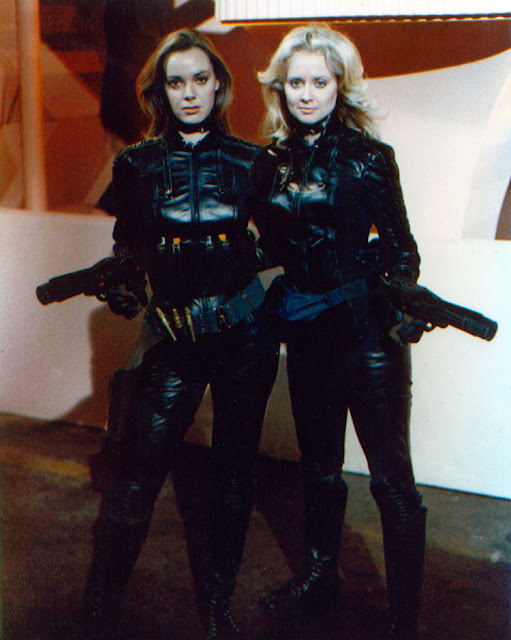 If only BSG and Buck Rogers had aired on the same network, there would have been the inevitable crossover episode. Then, we could have had Sheba and Col. Deering team up and kick Cylon butt. And I could have died with a smile on my face.

And how the hell did I not see this thread before now?

It was interesting how the two major versions swapped the names for Triad and Pyramid. 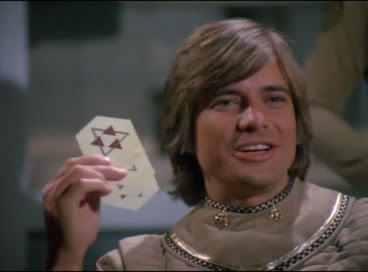 Ah those were the days. Jane Seymour, Erin Gray and me alone with my thoughts :)

Jane Seymour what a Beauty!!!

I really liked the classic as a kid, although the TV Series was not shown here until the late 80s.

But nuBSG just blew me away. If I may quote myself (from here: http://originaltrilogy.com/forum/topic.cfm/2ndBSG-a-review-and-analysis-of-season-3-the-finale-Caprica-observations-Spoilers/post/543564/ ):

Although I don't believe a God exists, I'm fascinated by storys based on religion and/or god. Like the movie "The Prophecy", or "Supernatural" or the book "The Jesus-Video" by Andreas Eschbach (I don't know if it's available in other languages than German).
But the God-Theme in BSG was never such a great aspect to me.
Since the classic BSG was an action show, while the storys and characters stays hollow all the time, the new BSG is a character-show.

I've never seen a sci-fi-show before, that got so deeply into the characters as BSG. As a fan of Star Trek, my favorite show was DS9, since they tried to give the characters more depth. But they failed, because of the episodic storylines. In Season 4 there was this episode "Hard Time", where O'Brien is imprisoned for 20 years in a virtual prison. In real time he stayed there only a few hours. At the end of the episode he tried to commit suicide, because of his (not real) memories. But in the next episode O'Brien was all love-peace-and-happines again. That's what bothered me.

Not so BSG. You see the rise and fall of characters and always the question comes to mind 'what would you do?' (regarding Admiral Cain, f.e.)

The first two seasons of BSG were awesome. Great storys, action and pacing were good, and ending season 2 with a "One-year-later" was fascinating. Then came season 3. The "getting-off-new-caprica" storyline was okay, but then the season began to suck. Stuffed with filler episodes like "Hero" it got more and more boring. But suddenly the last 15 minutes of the last episode of season 3 made it worth to watch it all. 15 minutes that saved a whole season.

Then came "Razor". A very good story, a mysterious new character, and an old hybrid prophesying all of season 4 (that's why you should watch "Razor" after season 3 and not in the middle of season 2), in a very cryptic way, of course. And "classic" cylons in action, yay.

Season 4 was awesome again. The series ended with a solution I never expected. Okay, maybe it was God who led Kara's hands but it could've been a coincidence, or whatever.

I have seen the pilot (miniseries) to the reimagined series and I loved it.

However I could barely make it through season 1 of the new show and I couldn't force myself to see the other seasons. Too much religious crap for me