Hmm maybe… I just wished they would have gone further away in a different direction.

I am more a graphics and visuals guy than a sound guy, but for me it seemed totally as if they borrowed quite a lot of him 😉

Hmm this one is tough for me… I always found the ground troops, pilots and soldiers more interesting then the jedi. I liked the balance in the originals but really looked forward to this one… Because of the promise of a gritty more routed war movie.

At the end I enjoyed the movie… But was also quite disappointed.

The first act gave me nothing it seemed pointless and to crowded with unimportant details that never paid off… I would really like to see the version before the reshoots because for me it seemed like a big patchwork that never fitted together as intended.

Same for the characters I liked jyn… But that pilot for example? It always seemed as if his story arc is missing.

And no I don’t need backstory for everything… But often it seemed as if there was backstory planned and filmed and than cut out.

I have hoped they would be more bold in their creative decisions… and I know it is nitpicking… But small stuff like that ugly titelcard that looked like the intro of an untalented star wars YouTube channel… Why not using something completely original?

Same for the soundtrack…

I totally disliked those small cameos, especially r2 and 3po. That’s one of the point red letter media got right in their review.

It was fun to watch, it was more my kind of star wars the most of the jedi focused stuff out there… But it was still played to save for my liking and it seemed to unstructured.

I just watched Episode 2 for the first time - after seeing it in the Cinema back when it came out.
oh my god… that movie is so bad it made me Angry… what a mess.

Anakin is the creepiest rapfaced psychopath since this guy: 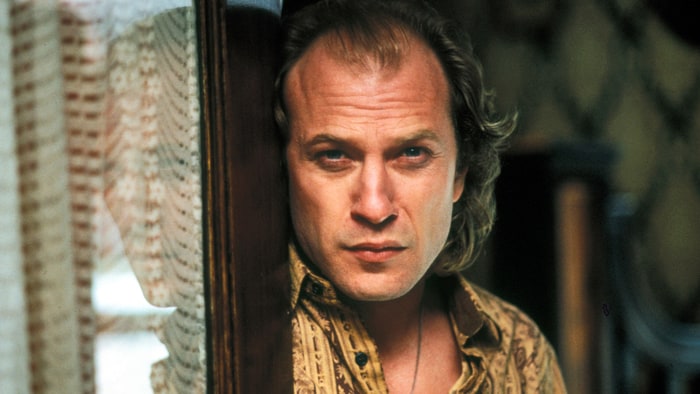 I know most of us are here to forget thoise movies… and thankfuly Disney helps with that… but wow… I completly forgot what a shitshow it was… and I KNEW it was bad.

no I don’t know the Hobbit Box… I just have the normal Extended Editions.
This Box is Build by myself from scretch…

here are some Images from the Process: I just wanted to say thank you!

I used your BluRays as the base for my own Box Set that I will give to my Dad this Christmas… and your Work is Awsome!
THANKS A LOT!
It just makes the whole set more Professional and neat to have your menues… also loved the Specials you collected… keep up the great work! Hi there…It is finaly done 😃
Some of you might know that I was working on my Custom BluRay Set for the last Year…
I Made my own Covers, Booklets, Discs and Boxset.
I Made it as a Chritmas Present for my Dad and wanted it to look as close to an Professional Release as possible… but with some retro charme 😉

If you have any Questions, be not afraid to ask them…

and now let the Pics speak for themself:

The Fold of the Box I would REALY apprecheat your Comments and Feedback 😃

maybe this video can help you…
https://www.youtube.com/watch?v=g2ABXldEEv0

I got my ticket for the wendsday 14th midnight viewing in 2D at the local cinema… Stayed up for the tickets and got exactly the seats I wanted, so I’m pretty happy with that. 😃

Hi there…
Right now I am in the Process of designing, creating and building a new BluRay Box set.
Now I realized that most people here, just show the final Product when its finished.

so my Question I want to ask:
Would anyone be intereted in the Process? or do you think its just unnecessary spam…
By Process i mean just that: Showing some Previews and WiPs, show “Behind the Scene” Pics of the Building and Designing Phase, maybe explaining some stuff and why I do it that way… stuff like that.

Disclaimer:
I am not reinventing the wheel - Some Elements are already used in the works of others here, some are completly Original (see my “Poster” Thread for an example: http://originaltrilogy.com/topic/Feedback-Please-Original-Trilogy-Poster/id/51688) and some are just my own little Touch…
I am not a Profesionell Box Builder Things WILL go wrong!
I am from a Graphic Design Background so that stuff is pretty save 😉
Also: I am from germany and building the first Box for my Dad (yes yes I know the Jokes…) so it will be in German, and have the german title, If the Community is interessted I will offer English Printfiles when everything is Final. I alreay prepare most of the Stuff I need for the english Verions… but all Pics will show the german version at the beginning.

have you tested to download them?
When I tried to download Jedi 2 Day ago a lot of parts where shown as “offline” but then downloaded anyway…

so much for “Final update”…
I just updated the explosion on the right side - I like it more than the Firesparks of the older Versions, but this time it is really finished 😉 now I have to print a new Poster 😉

I realy like the new Grading… In most older Versions you posted the Shirts of the Rebells where to grey and not blue enough for my liking…
Also the Colors of the Tantive seem more authentic and less stylized to me. 😃

Can someone PM me the original Harmy Blu-ray cases that he made? I can’t find them anywhere in good enough resolution to print. I don’t need the pics to be ridiculously huge, just big enough to print.

sooo I think this is the Final update…
I was not happy with the look of Chewie so I redpainted him from scratch - to fit the style of the others better. I repainted the Sandtrooper, Hans Hair and changed some Vader Details to make him fit better. here is a Comparison… the left image is the original - here I painted just some details and used Photos for the rest because I was lazy 😉 on the right you will see the new 100% painted one. I am pretty happy how the Image turned out - thanks for all your support and feedback!
Hope you like it too 😃 and of course still appreciate any Feedback you got! Those BluRays look Awsome 😮
would Love to get my fingers on them… especialy the Bonus Discs
Are this Files still downloadable without a torrent? If so: could somebody please send me the Links? that would be Great!

Alternative: Is it still possible to get an invite for Myspleen? Maybe I just have to finaly get this Torrent Stuff sorted out 😕

thanks for your Help!

So update time… while I was pretty happy with the Image in the last Version… somehow it was missing this “star wars feeling”, at least for me…
after I reviewed the official Posters of the last 30 Years (or at least the ones I liked 😉 ) i found a main differents in everyone of them… all of them have a boxed Layout.
Even TFA worked with that… so I tried that… and I think it realy helped the Image… opinions? Yeahr You are totaly right… I am working on that… in my first Version he was completly Black and looked realistic… but had a different feeling than on the classic Covers… now he fits the old style, but looks like an comic Illustration… I am still working on an Solution Hm its a lot of Photoshop Magic… but also a lot of handwork…
Let me try to explain my Process:

I started to build the Comp from Photos in Photoshop. after thatb i printed the Image and Traced everything with a pen on another Page, here I illustrated everything else (you might have noticed that some Characters are not in commonly availeble Poses… like Luke for example)

After the Illustration was Scribbled on Paper I scanned the Pic an loaded it to Photoshop… the Coloring was then an mix from Photos and Handcoloring…
For the Photos I used a mix from this:
http://blog.spoongraphics.co.uk/tutorials/how-to-create-a-realistic-painted-effect-in-photoshop

and this:
http://petapixel.com/2015/05/15/how-to-turn-a-photo-into-a-painting-with-photoshop/
to blend them with the handcolored stuff…
also I overlayed my sketch to give it a even more hand illustrated style

Also I changed the Lights and Shadows of the Photos and my handcolored stuff to fit togehter… one of three layers for that you can see here: hope that helps… if I would want to do all the work just in Photoshop, I think I would still experiment with does Tutorials above. 😃

again thanks for your Input.
I was planing to use the same YingYang Concept with Yoda and Palpatin for the Prequels, together with Amidala, Obi Wan, Anakin, Battle Droids, General Grievous and Count Dooku or Jango Fett (or something like that… I am still in Concept Phase and want to Focus on the Original Trilogy for now.)

on this one I wanted a special Trooper for every Movie… a Sandtrooper for ANH, a Snowtrooper for ESB and a Scouttrooper for ROTJ, to show the Faceless Threat and shear power of the Empire!

Thx for your Feedback!

You are totaly right, both are important Characters and totaly Deserve to be on the Cover… I would also loved to add Lando.
I also tried to add them in the early States (together with some other characters like Tarkin, Jabba or Boba Fett)
At the End of the Day I decided against it… for two Reasons: